Adelchis (c. 759 - 1 February 778) was the King of Lombardy from 776 until his death in 778. He was the only son of King Desiderius and his wife Ansa Ansprandling.   He had a brief reign during which he completed his father's war against the Umayyads and was excommunicated by the Pope. He died two years into his rule, aged only 19. He left no male heir, and his death threw the Kingdom of Lombardy into turmoil as his surviving sisters vied for the throne.

Adelchis became king at the age of 17. His father died a natural death whilst leading the Lombard navy in a holy war against the Umayyad Sultanate, and Adelchis immediately left the royal residences on Pavia to take his father's place. The young king is reported to have been a brave commander, and led his forces to a victory over the Umayyad navy at the Battle of Puigcerdà.   Adelchis was generally disliked by his most powerful vassals. He was well-known to be homosexual as well as indolent, two traits which did not endear him to his subjects. His lack of a male heir also hurt his prestige. Almost immediately after taking power Adelchis increased the amount of levies that noble vassals were required to provide in order to bolster his war effort against the Umayyads. Although this succeeded in strengthening the Lombard military, it further damaged his reputation amongst his vassals. 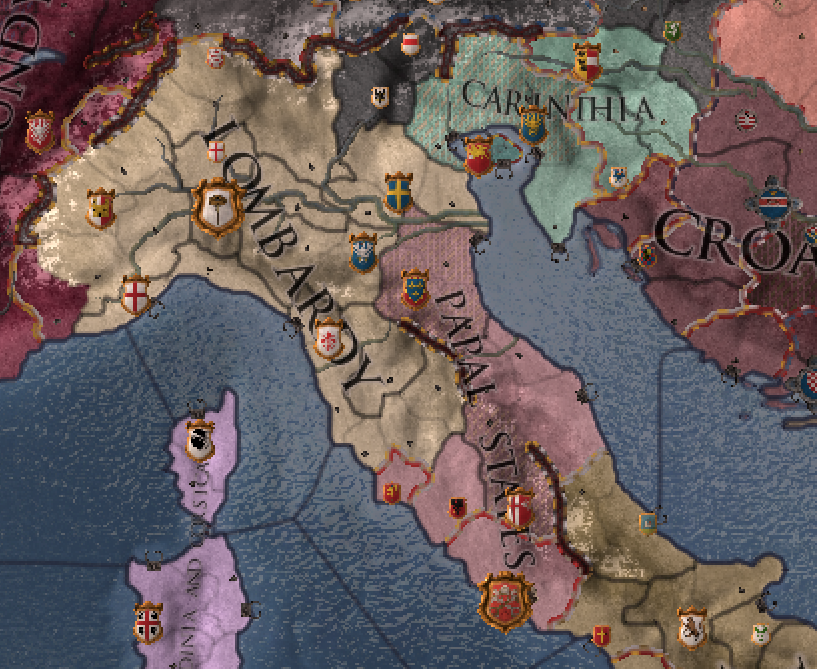 The regions claimed as the Papal States in pink, with the de facto 776 borders in dotted lines.
The Lombards had been at odds and often at war with the Papacy or its Byzantine protectors since they entered Italy in the 6th century. By the time of Adelchis the Lombards no longer practiced Germanic paganism or subscribed to heretical Christian doctrines, but there was still serious friction with the Papacy over the middle of the Italy. The Papacy claimed de jure control over a band of regions it called the Papal States, spanning from Latium in the south, through Spoleto and Ancona, up to Ferrara in the north. These regions had been conquered, lost, and then reconquered by the Lombards in the mid-8th century, and thus the wounds were still fresh. These regions were also inhabited primarily by Italian peoples, apart from Spoleto, which had been Lombardized.
Adelchis was excommunicated by Pope Urbanus the Quarreller in late 776. This was the first time that a Lombard king had been excommunicated. The stated basis for the excommunication of Adelchis was his homosexuality, however it is apparent that this was not the only reason. The stain of excommunication threw the young king into a precarious position. He was already disliked by his most powerful vassals, and his excommunication pushed them closer to open rebellion. This served the ambitions of the Pope well, as an unstable Lombardy made a reconquest of the Papal States more viable.

Victory over the Umayyads 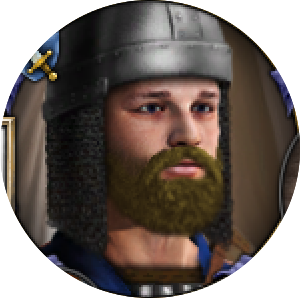 Adelchis leading troops (777; aged 18).
In contrast to events at home, the war against the Umayyads was proceeding well. Karloman the Mule of Middle Francia had sent his fleet south in 775 in his own holy war for Barcelona, and although the Lombards and Franks were both fighting for the same territory in practice they formed a united front against the Umayyads. At the Battle of Albarracin in February of 777 a united fleet of 5000 Frankish and Lombard ships defeated 1800 Umayyads. After this battle the defeated Muslim fleet retreated south in order to deal with a revolt against Sultan Sadiq, and abandoned Barcelona to the Catholics. In October of
777 Karloman the Mule took the sectors of Barcelona and Tarragona, and in December of 777 Adelchis took the sectors of Empuries, Lleida, and Urgell, constituting the remainder of Barcelona. This division of spoils does not seem to have been decided upon through negotiations, but simply because these were the territories held by each power after the retreat of the Umayyads, and at this point neither force wished to go to war against the other, having just finished their common enemy.
After the conquest Adelchis granted counties to courtiers of his designated regent the Duke of Verona, as well as a governorship to his former mentor Grimoald Gausian, the younger brother of the Duke of Benevento. It was also around this time that he granted the sector of Zadar to his bastard step-son Adhemar de Pavia. 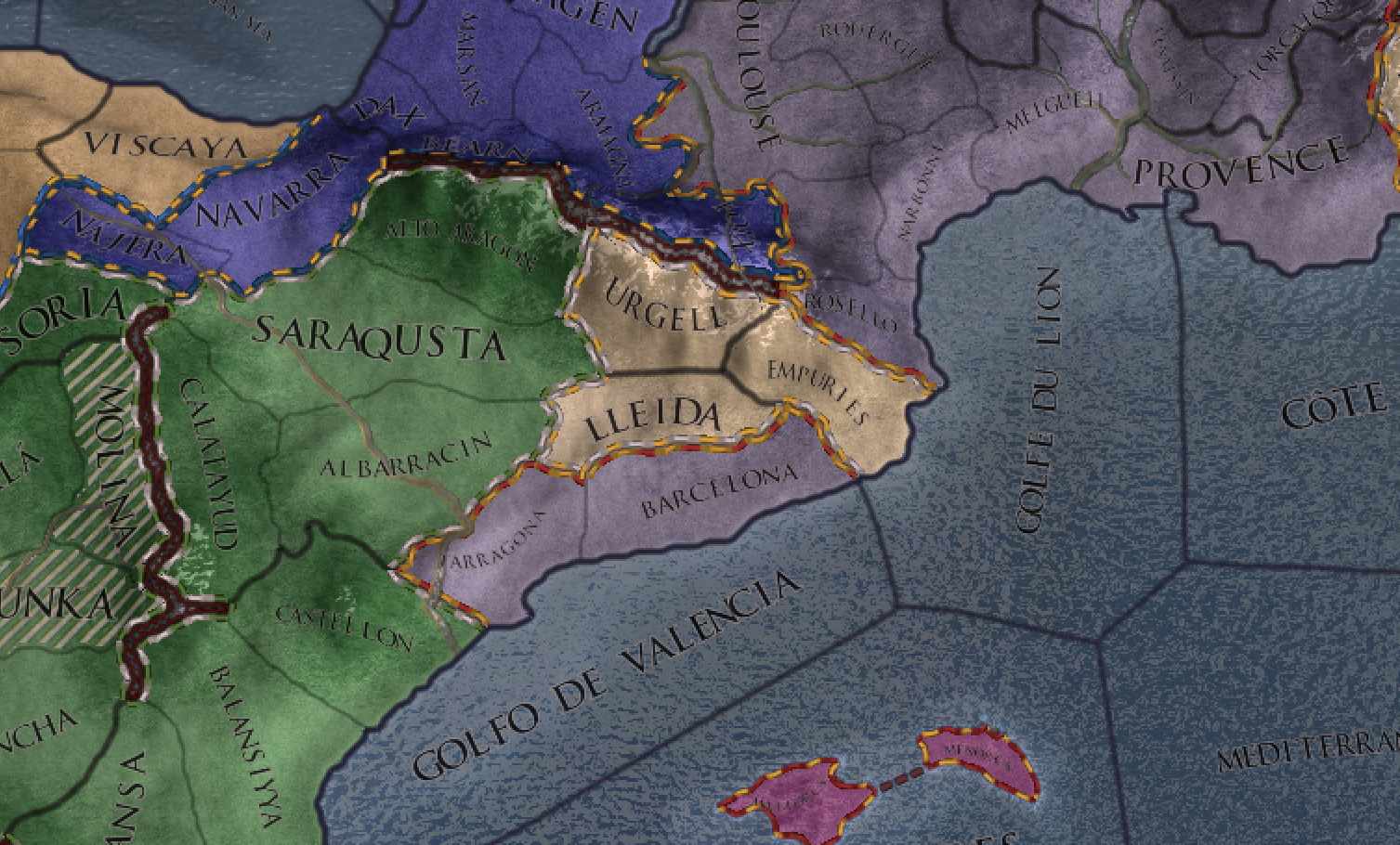 In December of 777 Adelchis was forced by a faction led by the Count of Bellinzona to give his council the power to vote on declarations of war. This was not enough for some, and soon an attempt was made on his life. During a Christmas banquet a servant was caught mixing poison with wine intended for the King. Under torture the servant confessed that he was being paid by the Duke of Spoleto, the king's senechal. A plot was quickly unraveled which implicated the Dukes of Spoleto, Tuscany, and Friuli, along with the Count of Bellinzona, all conspiring with the King's eldest sister and heir Princess Anselperga to assassinate Adelchis. The conspirators never faced repercussions due to the timely death of the king a month later.   In late January of 778 the Lombard fleet anchored at Padova, during a journey south to aid Adelchis' tributary the Duke of Benevento in a war against the Republic of Amalfi. According to those present, the king was suffering from a bout of fatigue, scarcely distinguishable from his regular slothfulness. On the first of February he retreated to his quarters before the afternoon, and was no longer heard from. The next day his commanders became worried at his prolonged absence, and conducted a check on his quarters. Adelchis was found drowned in his bathtub. There were signs of a struggle, but no suspect was ever apprehended. The nineteen-year-old ruler died childless, uncrowned, and excommunicated. He was the last living male member of the Alachisling dynasty, and his death sealed the eventual extinction of the house.   After the death of Adelchis the Lombard throne passed to Anselperga. She quickly ordered the execution of all of her deceased brother's guards and attendants who were present at the time of his death. A month after the new queen's accession to the throne a revolt broke out against her, attempting to put her younger sister the Countess of Empuries on the throne. This marked the beginning of the Sister Wars.

Adelchis married his stepmother Menia in 776. She had been married to his father Desiderius for approximately a year beforehand. Menia was known to be an adulteress, and gave birth to the bastard son of an unknown father in May of 776, the future Count of Zadar. Unlike her liaisons, the marriage to Adelchis resulted in no children. After the death of Adelchis Menia married the Count of Monferrato. 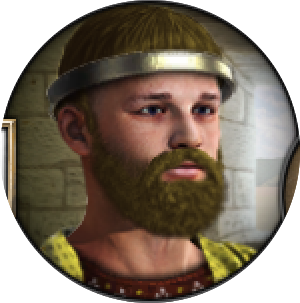