We wished to survive. We needed a back-up plan for if we lost the war - a way to become even greater gods.
— Sōzōryoku no Kaze-hakase


- DO NOT IGNITE -
The vine's woody stem propagates flames between its oversized leaves. High levels of Aristolochic Acid(i) and stored electrical energy prevent Digivine from self extinguishing and, in extreme cases, causes the burning leaves to explode.

- DO NOT TOUCH, CUT, PIERCE, TEAR, OR SEVER -
A full grown Digivine exposed to direct sunlight produces currents up to 3 A(i). Touching or damaging the leaves or severing the stem or roots may cause painful shock, loss of muscular control(i), respiratory paralysis, and/or ventricular fibrillation.

Leaves(i) produce a plant's "food" energy through photosynthesis(i), keep it cool, and enable it to transport water and minerals via transpiration(i).

Phase 1 of Project Aiónios transformed the vine's leaves into individual organic solar panels. Changes made to the leaves during Phase 2 enabled them to store electricity.

Circuits within the leaf’s veins(i) developed during Experiments 49-72 connected the individual chloroplasts. Experiments 73-96 balanced its natural photosynthetic behaviour with its new photovoltaic ability so the plant could stay healthy and grow.

PHASE 2 - ENERGY STORAGE
The location and method for energy storage was the 'hot-button' topic between Project Aiónios' research groups. An unending series of extended debates followed the success of Phase 1 until Sōzōryoku no Kaze-hakase intervened. Xe dictated the the leaf team would lead the next phase.

Experiments 104-112 adapted the leaf's spongy tissue(i) into capacitors(i) but ended in tragedy. Kaze-hakase abandoned Phase 2 after a fatality during Experiment 112 and redirected all remaining resources to the root research team (N/I Phase 2B).

A stem provides a plant structure and protects its xylem(i) and phloem(i). Buds grow along the stem and become leaves, flowers, or more stems. The stem forms bark as new cells crush the previous layers into hard, dead tissue.

The twining behaviour(i) of Digivine's stem allows it to grow vertically by wrapping itself around a climbable object. Its stem is narrow and flexible since another structure supports most of the vine's weight - only the stem tip remains rigid and self-supporting. The vine grows rapidly as it does not need to spend energy forming its own support structures.

Phases 3 and 4 of Project Aiónios changed the vascular bundle(i) to transport electricity and more inorganic material throughout the plant. To accommodate these changes, the Digivine stem's characteristic diameter is larger than the original species.

PHASE 3 - MATERIAL SUPPLY
The new photovoltaic and capacitive cells in the leaf required additional inorganic material from the roots. Experiments 129-144 adapted the xylem to move more mass at faster rates, but the design over-performed. The excess salt poisoned the plant, and specimen mortality rate increased to 72%.

Sōzōryoku no Kaze-hakase demoted and punished the original stem research team leader for the setback. The stem team recovered some credibility during Phase 4, but it was the root team that balanced the plant’s salinity in Phase 6.

PHASE 4 - ELECTRIC PATHWAYS
The four teams redesigned the plant’s internal circuitry to account for Phase 2’s and Phase 3’s shortcomings. Experiments 145-160 produced a wire-like pathway within the phloem to interconnect the leaves’ electricity production and deliver the energy to the root-based storage system (developed in Phase 5).

Formation of the "wire" consumed some of the excess inorganic material from Phase 3. The reduction in specimen mortality to 46% may have preserved the careers and well-being of the stem research team.

Plant roots have two primary functions:     Cisgened(i) pipevine are dicots(i). In dicots, the radical(i) grows downward from a germinated seed to form a taproot and secure the seedling. Lateral roots(i) then develop to further anchor the plant and increase the area feeding the plant.

Phase 3 altered the primary and secondary roots to absorb additional inorganic material, and Phase 5 (Experiments 161-176) converted the tertiary roots into chemical storage for electrical energy (i.e. made it a battery). 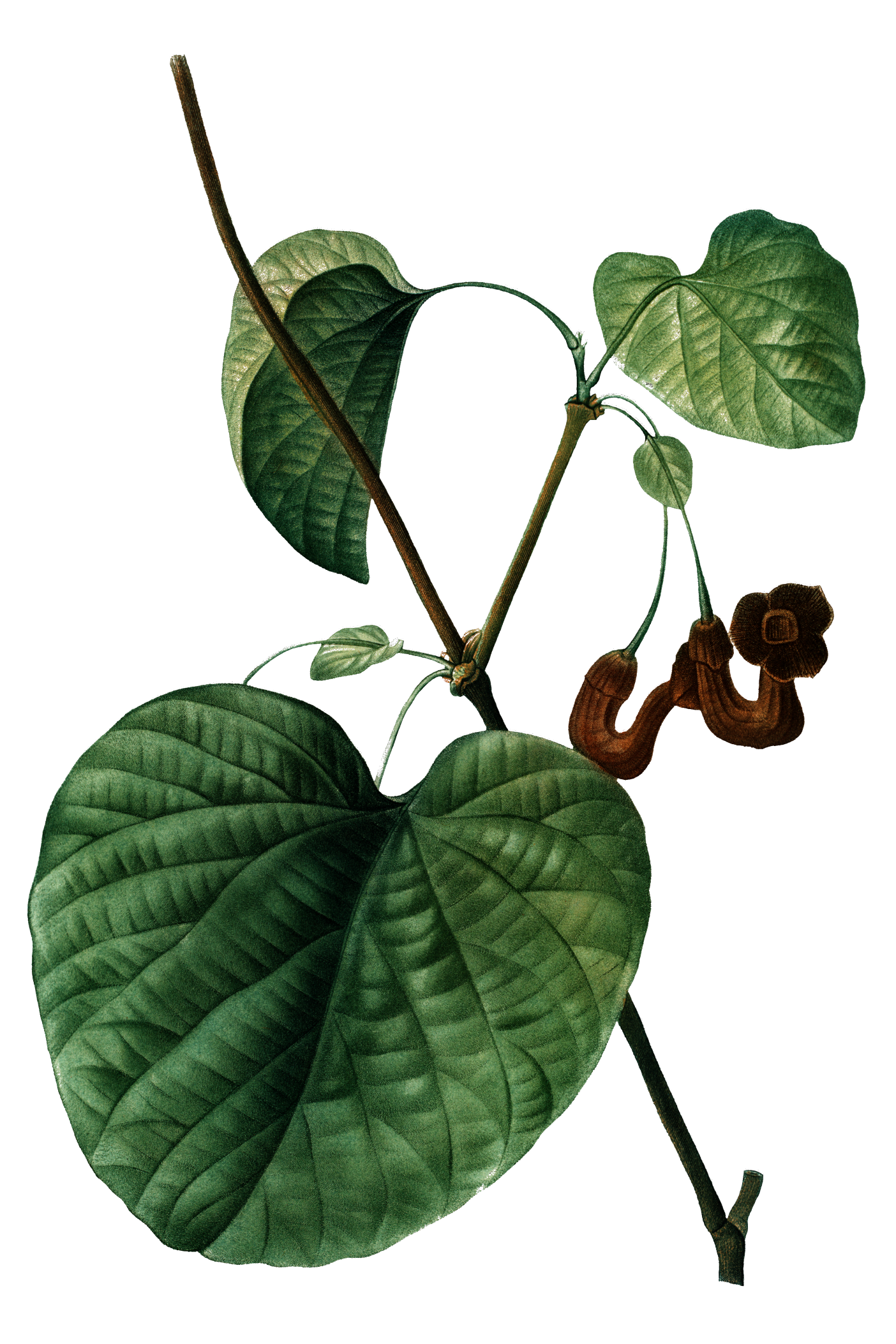 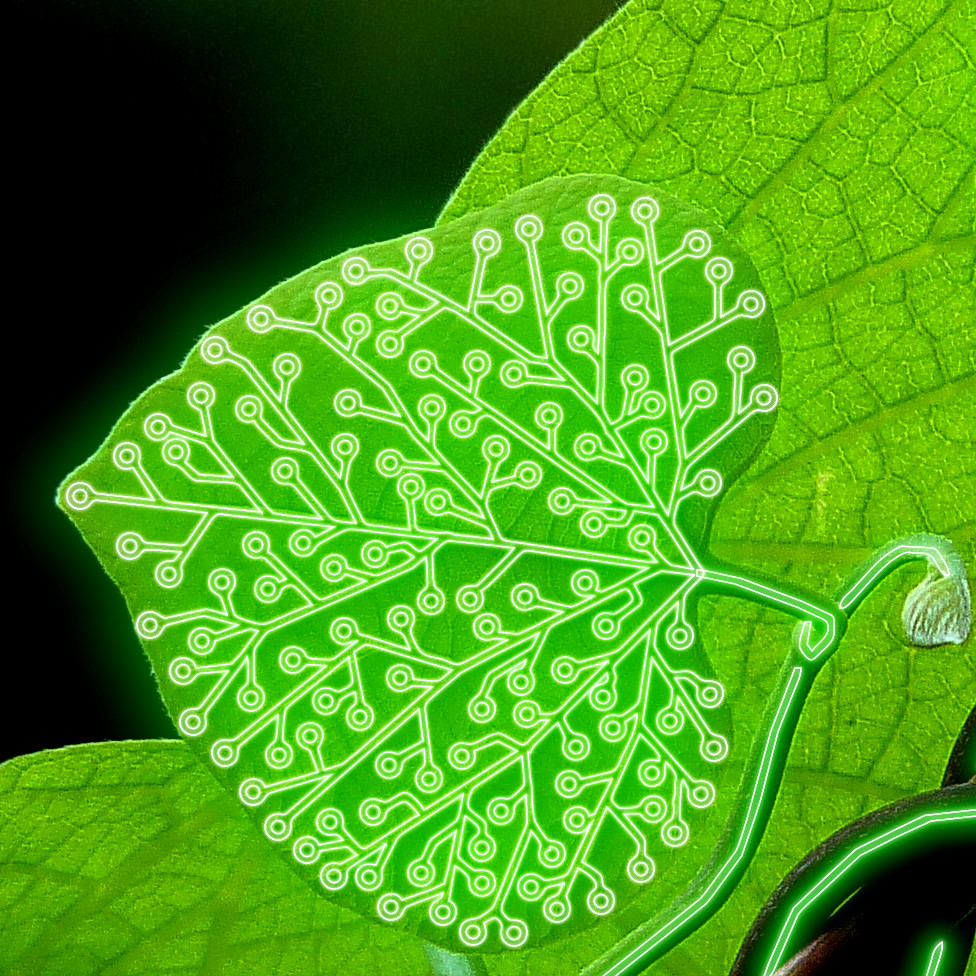 Unmodified pipevine host Pipevine Swallowtail Butterfly(i) larvae. This species' caterpillars absorb Aristolochic acid while consuming the toxic plant's leaves but, unlike most creatures, they are unaffected. Instead, the acid renders the caterpillars and butterflies poisonous, protecting them from their would-be predators. 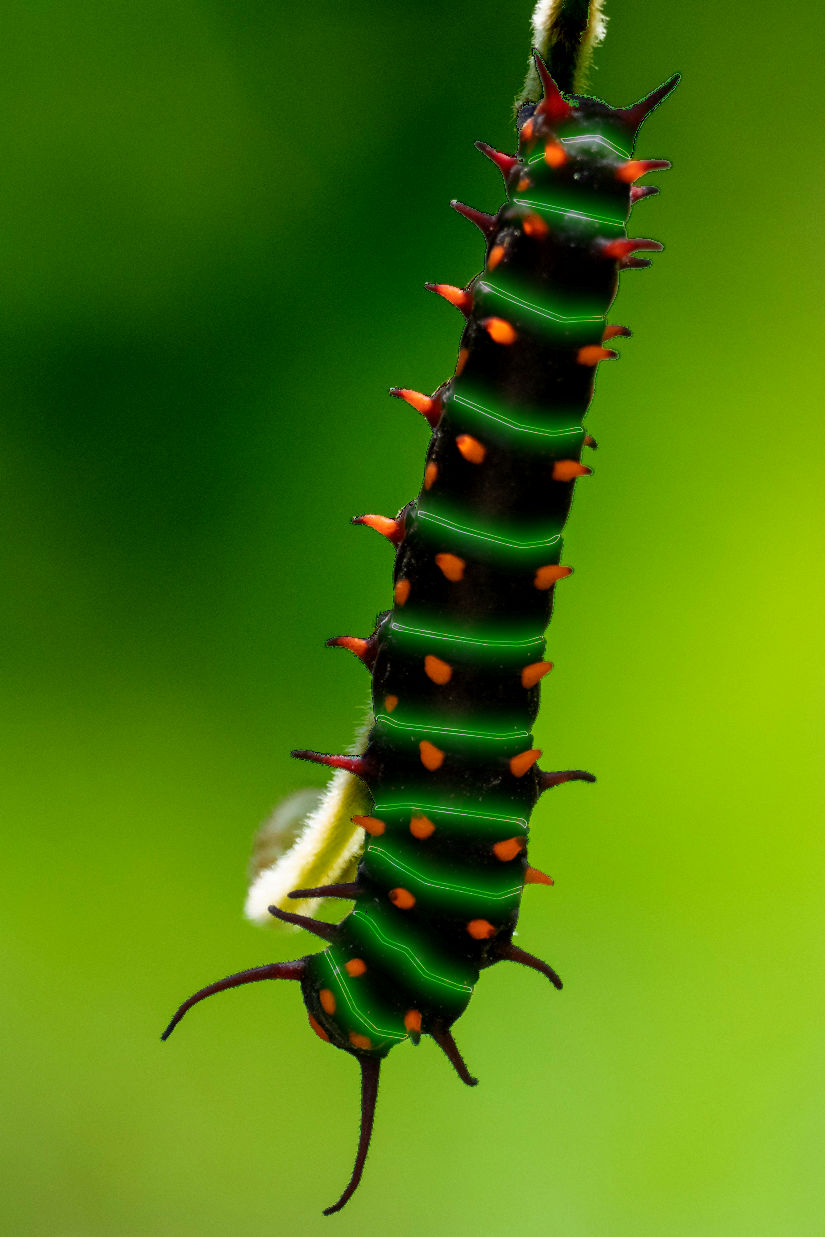 Once in nature, Digivine became another haven for Battus Philenor. However, over the generations of butterflies, a form of benign digital cancer afflicted the species until a new species emerged - the Digivine Swallowtail Butterfly, Battus Philenor var. enérgeia(i).

The creatures remain poisonous but can now also produce and store electrical energy. The luminous bands in the caterpillars' bodies and the butterflies' wings make this change apparent.

Both the caterpillar and butterfly use these lights for camouflage on the Digivine, but male butterflies have also incorporated flashing and changing light patterns to individualize their courtship displays. 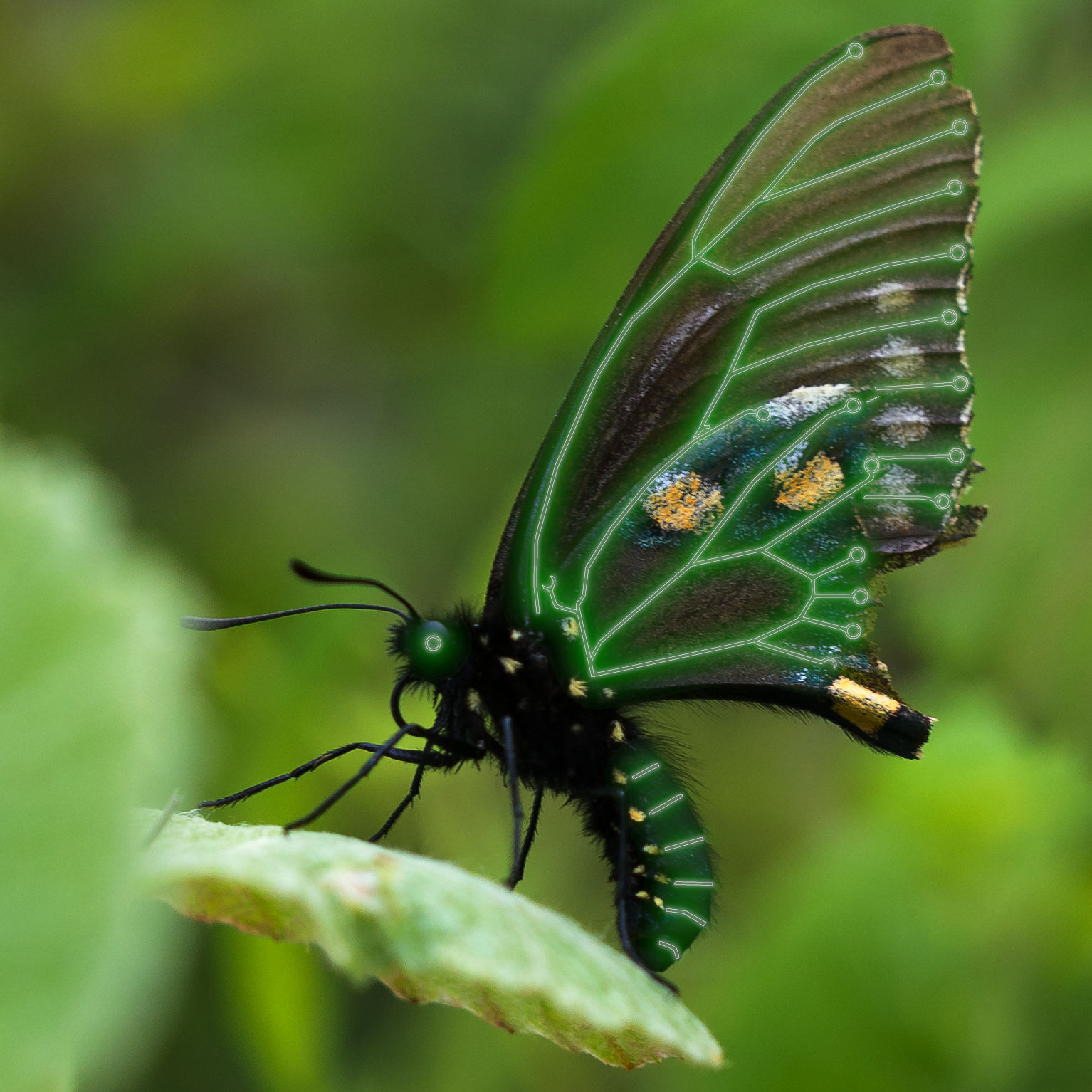 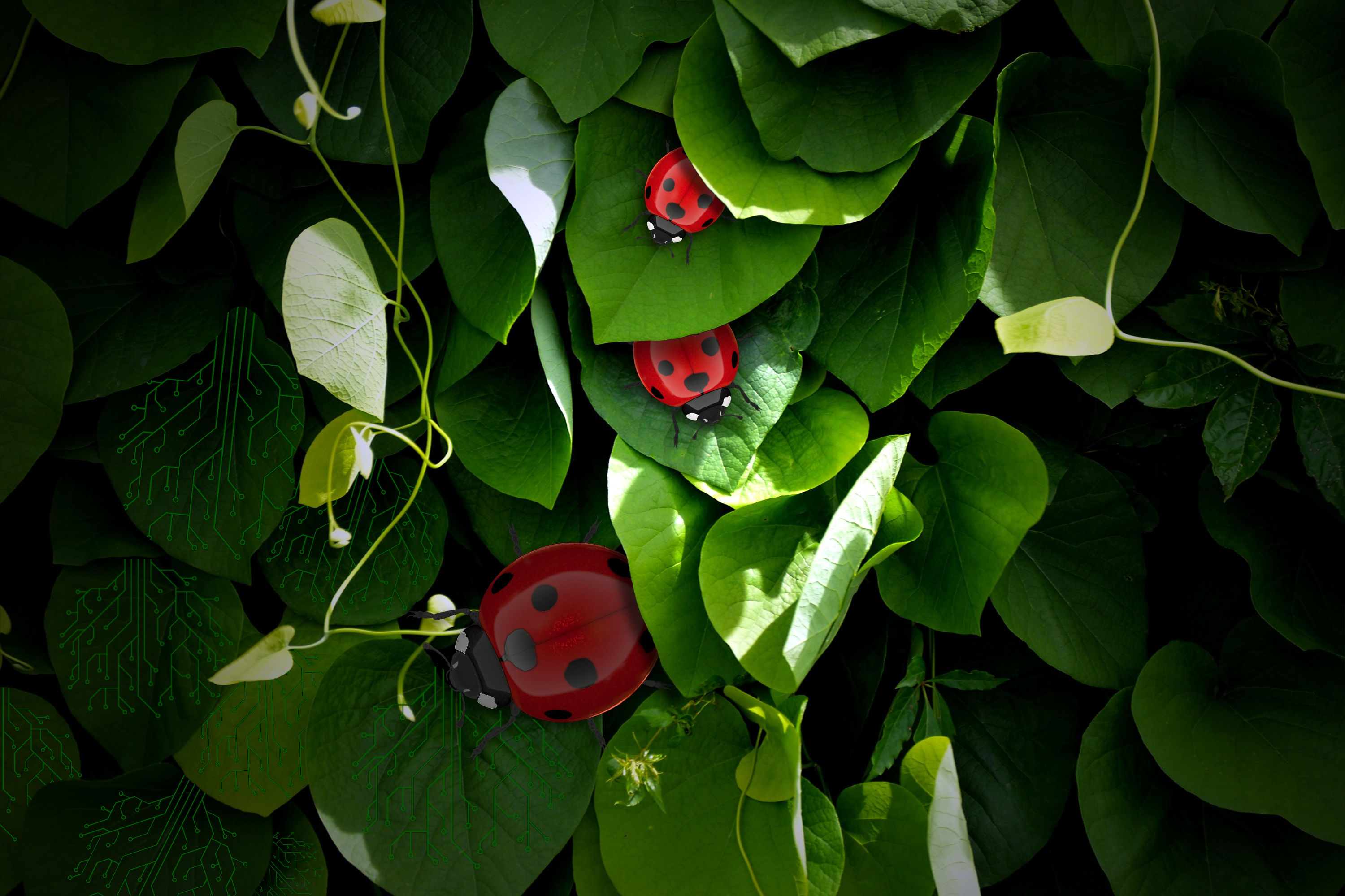 Experiments 181-184 developed quaternary root structures that did not previously exist in the species. Experiment 185-188 demonstrated a high confidence interval for entraining inorganic material into the quaternary root cortex(i) because of the previous experience mutating the xylem and phloem (Phases 3 & 4; Experiments 129-160). Specimen mortality from excessive residual salt in the leaves has dropped to <1% (orig. 72% during Phase 3).

Experiments 189-204 biased the quaternary root's growth direction perpendicular to magnetic fields produced by electrical current in a wire(i). The tests confirmed that the design caused the quaternary roots to locate the buried test cable and then grow along its longitudinal axis. A new research team blind to Project Aiónios conducted Experiments 205-208 to confirm the validity and performance of the Phase 7 transgene design.

1) Exhibited >66% accelerated growth rate and >66% greater mass than an average (cisgene) tertiary root.
2) Passed electrical conductivity tests from stem base to >85% of its total length.
3) While exhibiting less than 0.1% electrical leakage through the epidermis(i)
4) Located and axially entwined a buried electrical cable (live, insulated) within first 33% of its length
5) Tested parameters only. % Viable = (% Q. Root * % DP * % ISS * % IGP)

Pipevine's name originates from its bizarrely shaped flowers, which are typically hidden by the vine's dense foliage. The flowers' unique method for pollination(i) begins when they open in late spring or early summer and release an unfortunately strong but distinct "rotting meat" scent that attracts small flies and gnats. Small hairs inside the perianth tube(i), which contains Digivine's pollen, trap the insects. The hairs wither to free the pollen-coated bugs to cross-pollinate with other flowers. A pollinated flower produces fruit during the summer, which ripen and burst to disperse its seeds during the fall. 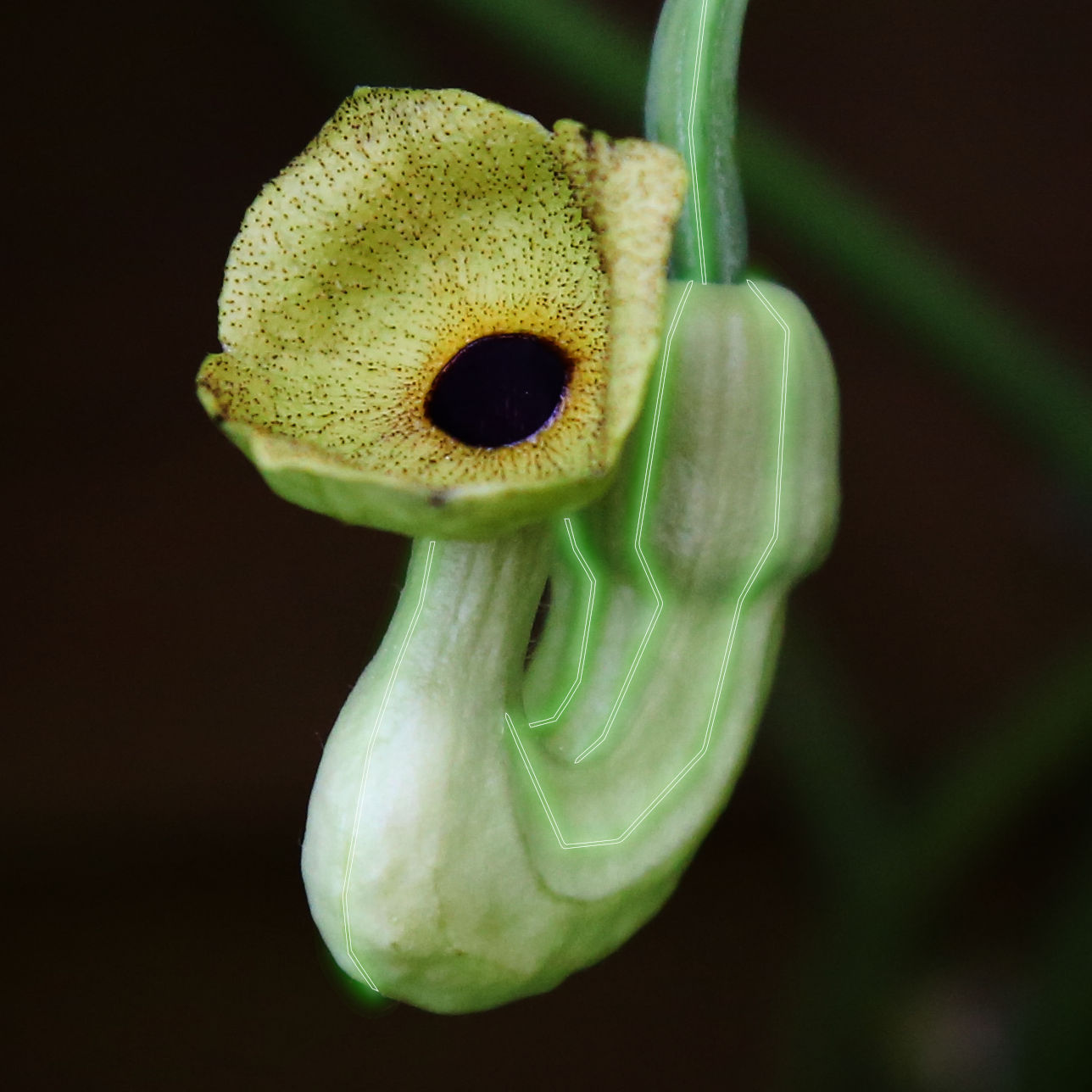 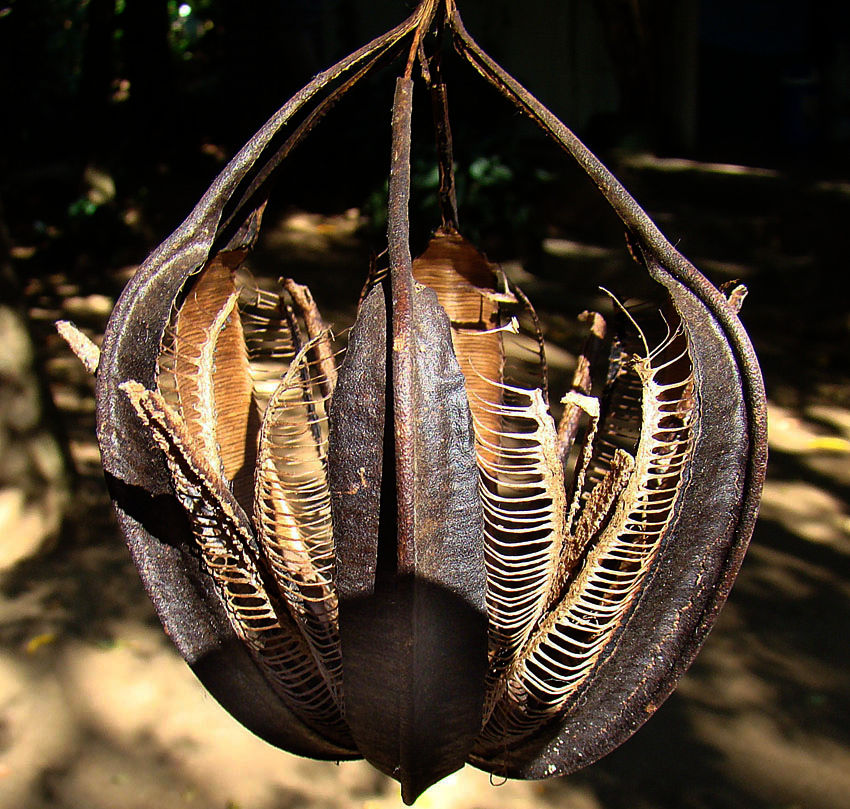 Digivine's flowers, fruits or seeds are unmodified per the dominant trait and reproduction test results of Project Aiónios Phase 8.


Aftermath
As Müthiş Savaş drew to a close, Sōzōryoku no Kaze-hakase grew desperate. After 20 years, Digivine was flourishing and İlerleme Tapınağı was receiving the power it needed. But death still approached, and Project Aiónios remained incomplete. There were still so many tests to do and the device would not to save everyone. How was xe to choose who to leave behind?   With great reluctance, Sōzōryoku gathered xir family, Soofaatasi Tagata, Geschichteter Fels, and the rest of Erudite in Test Chamber OMEGA on the day of the Cataclysm. The lingering scent of antiseptic agents filled the room, hiding the decades of Erudite effort that would make today succeed or fail.   Sōzōryoku's eyes fell to the ominous grey throne awaiting xir beneath a vast network of black cables. Chokers hanging by their cables created a vine-like forest above a twin helix pattern engraved in the floor. The room was filled with an eerie violet-blue glow coming from transparent tubes cascading across the ceiling.   The taste of fear filled xir mouth as xe tentatively led xir eldest child to the cold chair. Reaching upward, xe took the Prime Connection and brought it to xir child's throat.
"Don't worry, I am here. We will be together forever. It won't hurt, I promise. We will be one."
The Connection cinched tightly around the child's neck as they took their seat. An air of nervous anticipation filled the room as the onlookers spread themselves equidistant along the helix, each one binding themselves with their own Connection.   Sōzōryoku took xir place behind the throne where the final Connection sat upon the control console. The silver ring glinted from Sōzōryoku's neck as xe turned on the machine.