Note Head Ranger Gulliman forbids access for the areas detailed in the article unless given special permission. "Every Ranger who sees an explorer walk toward one of those areas, stop them, threat them, hurt them. I don't care how you have to stop them, it's better than another addition to the missing corpses in The Wastes".

considered to be one of the most dangerous monsters in the wastes, Rangers avoid them at any chance given.

Only the most loyal followers of The Cat are given the fate of becoming one of his eternal servants. Every devotee is attracted into the wastes, where he begins a tough journey. During the test, a follower will write literature and will draw for his god, while being inspired by him and getting endless ideas from his master. Most of the time a madman will die before reaching the end, as The Wastes are harsh and unforgiving, usually dying of starvation, or being eaten by a monster. In the rare case, someone reaches the Deep Ring they are asked to write as much art as they can, in most cases letting themselves starve while writing. Those who finish those hard tests are revived by their god and after a small duration, given a new body and given the chance to do what they love most for eternity

A Lightning Spectre always hovers above the ground wearing a cape made of the art it has made for its god in life. The Specter is huge compared to a human, usually being four meters tall, their body is made of bronze and they have two extremely long arms. Each hand only have four fingers and a hole in the middle. Disturbingly enough, they lack any form of midriff, as their torso consists only of the chest area with their spinal cord dangling out of a hole in the bottom of the chest. Its head only has one feature, a grin that stretches from cheek to cheek

The hands of a Lightning Specter can charge lightning and shot it at whatever they wish. Unlike a banshee or a Distorter, the Specter physical power is fearsome, with a body that is made of bronze being able to block most conventional cutting weapons, and the power to tear apart metal plates with its bare hands.   Specters can fly, and even more fearsome they are fast as a horse when they do

Lightning Specters are known to be attracted to places where the realm of The Cat and Malkuth merge. Although rare in most places it is known they are scattered around in the Deep Ring and in the Epicenter, where the realm of The Cat and Malkuth are one and the same at many places. Some Specters stay in static places, for example, libraries in cities and ancient sites, which is why we advise to not get close to any city in the middle ring and beyond.

Note rangers are in charge to stop anyone without permission to go into ancient sites, also, rangers should try to prevent people from going into the deep ring

Lightning Specters may look just dumb and derange, but, their actions say otherwise. They have been known to be able to read and write as they still make art for their god and look for the best of books to read. Specters are curious by nature, they will scour for any information and will go to any ancient site to learn about it, it goes to an extent that they will trade with people and stop attacking them if they offer a good book, usually giving one of their many artworks to the person.   Taken from ranger monster list page 94 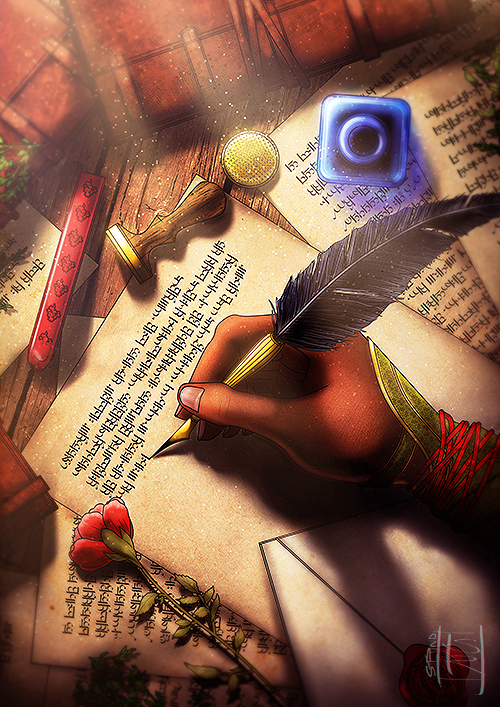 by Deridias Designs
This article is taken from the Rangers Monster list. A book detailing all the monsters the rangers encountered and all the information they have about them