Tiwa Okoro was born and raised in Nyckaneh. She left her town in search of ways to help her people, as her ancestor Akanni Okoro once did. Now she leads The Protectors.

-Where is Tiwa?
-She is out there, teaching little Ade how to read.
-She does love teaching, doesn't she?
-She does, but she loves exploring more.
— Tiwas' mom and her aunt

Tiwa is the second daughter of Ekun and Bidemi Okoro. She has an older brother and a little sister. Since she was a child she showed a deep desire to know everything and thanks to that knowledge, help as many people as possible. She was born in Nyckaneh and like every other kid, she developed her powers. Tiwa was a psychokinetic kid and in a rare case, she used her powers to assist others and entertain herself and her friends but did not enjoy playing pranks like many other kids with her superpower do.


When Tiwa lost her powers, she had problems adapting to her new reality. For a time she felt like a part of herself was lost without her power. She withdrew from her family and seek distraction in her interests and exploration of the valley, always inside of the limits where she knew she would be safe. But she craved to go beyond and know what was outside.


When her little sister, Eniola, got her superpowers, also psychokinetic, Tiwa saw her sister needed help to adjust to having that power. Instead of jealousy, Tiwa felt the need to guide her, and protect her. Tiwa became Eniola's mentor. Years later Tiwa started the Find your apprentice daytradition.

-I need to see the world, father.
-It's bleak and cruel. Stay with us in the valley.
-If I don't see the world for what it is, How could I help or even understand the people who come here in search of a safe place for their kids?
-I won't stop you because you're right. But please, promise me you'll come back.
— Tiwa and her father.

Tiwa grew up in Nyckaneh and she noticed how her town changed. The town received more and more new families than ever and the community needed to build better infrastructure and reinforce its clandestine network to provide them with all they needed. While it was common for families to come when the kids had superpowers and went back to the big cities when the kids didn't have them anymore, many families decided to settle there. That presented new challenges to the community


As she belonged to The Okoro, one of the families that founded the town, she always was aware of her family's legacy and she considered how she could contribute to that and also stay true to herself and her goals. When Tiwa turned 18 she talked to her father and explained to him her plan. She'd leave the town, get an education and experience in the outside world and reinforce their connections with the other hidden settlements part of The Protectors. Tiwa's father was afraid of her travelling alone and her big brother, Numile offered to go with her for a short time. Not because he thought her younger sister needed protection, but he understood their father needed reassurance she would be safe.


Once in the big city her brother helped her to settle and he came back to Nyckaneh. Tiwa put all her energy into her two desires, learning and exploring. She studied hard and became an expert in many topics that she knew would help her hometown. Tiwa also visited a lot of new places, including hidden cities. There, she studied how they managed their communities and what ideas she could bring to her town or modify. Years later, she earned the title of teacher. She and her family were very proud.


In one of her travels, she met Bisi, a woman that lived in one of the secluded towns. They fell in love almost at first sight. A couple of months later, they got married. After their first anniversary, they adopted Seye, their son. Tiwa and her wife decided to raise him in Nyckaneh.

-Sweetheart, what now?
-I need to protect Seye, us, and our community.
-How? What you would do if they come?
-Fight them by any means. Their greed will never touch my son nor this town.
— Tiwa and her wife

Although Tiwa went often to Nyckaneh to visit her family, inform the community of the development of their network and help in any way she could, she never stayed for too long.


Living again in her hometown, being a wife and motherhood was a challenge for Tiwa, but she wasn't alone in her struggles. She received the love and help of her family, friends and the community. That moment added a new motivation to her already deep devotion to all of them.


In the year Seye got his superpower, shapeshifting, Tiwa was appointed as the delegate of Nyckaneh for The Protectors together with an 11-year-old girl, Amaru, that was a speedster.
In her new role she helped to strengthen the organization and reinforce the safety of their settlements and the clandestine network, agents and routes. Tiwa did such a good job that they chose her as the leader.


The consequence of Tiwa's success was that more people emigrated to the hidden cities, or in some circles in the big cities was mentioned more often. That drew the attention of Big Dreams Corp and it's CEO Miqe Kishev. Tiwa is aware of the danger and is making plans to defend her family and her people when the time comes. Nyckaneh knew peace for five generations. Tiwa knows that peace won't last forever. The question is what she is willing to give to protect them all. 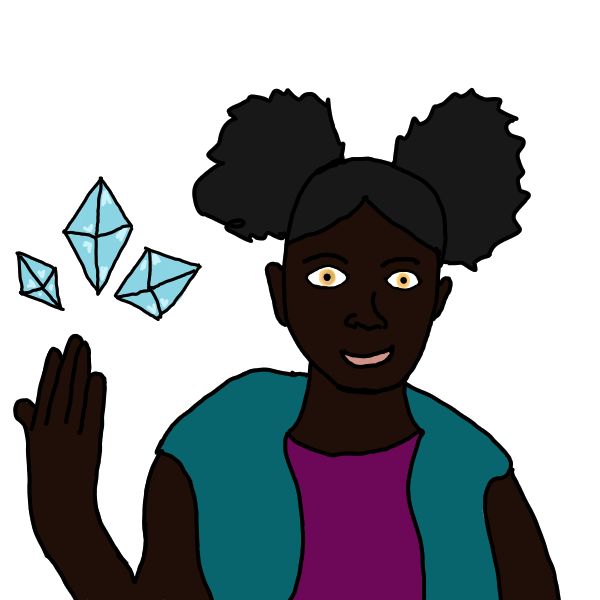 Answering: "a great leader of their people"
Visit Julian Ralid's Competition Page Check all other answers to this prompt Competition Homepage