Slender, agile and almost ethereal, elves are honored, feared and despised in equal part. Humans often see them as a fascinating people, because they have a special sensitivity to the secrets of the Great Dream. However, since elves understand raid and pillage as a survival need, they find mistrust wherever they go, no matter the race. And they show that mistrust to the other races too.   All of their tribes are nomadic, moving from here to there, hunting and gathering, walking long miles on foot during the day, and sleeping on the top of the trees at night. Given this fact, it is not surprising why many of them claim to be descendants from birds. Some bird species are worshiped between elves as manifestations of their tribal founders, and they consider that their souls migrate as birds to the the Great Dream when they die. 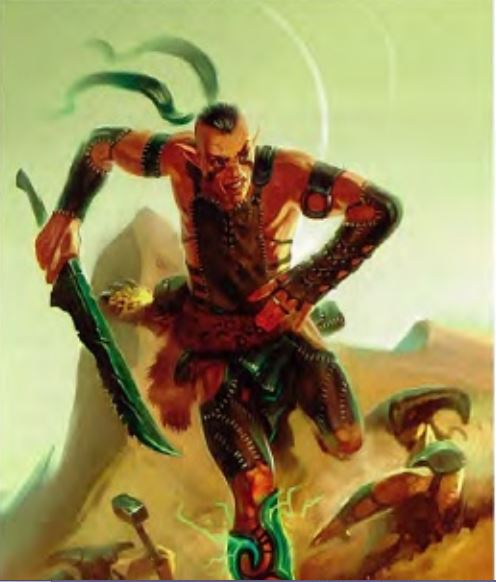 All elves can speak Aknane, the elvish tongue, but it has no written form. Aknane is fluid, with subtle intonations and intricate grammar. Even common phrases look like poems when translated, and sound like songs when spoken. Elven oral tradition is rich and varied, and their songs and poems are famous among other races. Many bards learn their language so they can add Elvish lullabies to their repertoires.   More information on languages can be found here

THOU SHALT NOT RIDE ON THE BACK OF ANY ANIMAL   Elves rely only their legs and hands, whether they have to flee, to climb or to run after a prey. Thus, in elvish culture the act of riding something as a transport, whatever the animal, is unacceptable. In their language calling someone a "rider" is an insult.   Racial Traidtion rules: an elf character will always refuse to use a mount. Doing so will be considered a violation of the Tradition and the character will risk become Tainted.
Elf Traits (D&D 5)   Ability Score Increase: Your Dexterity score increases by 2.   Age: Although elves reach physical maturity at about the same age as humans, the elven understanding of adulthood goes beyond physical growth to encompass worldly experience. An elf typically claims adulthood and an adult name around the age of 100 and can live to be 750 years old. However, most of them die "young" due to natural hazards of the forests and steppes they live in.   Alignment: Elves love freedom, variety, and selfexpression, so they lean strongly toward the gentler aspects of chaos. However, they only value and protect elvish freedom. They disdain the fate of the lesser races, so they are more often neutral rather than good or bad.   Size: Elves range from under 5 to over 6 feet tall and have slender builds. Your size is Medium.   Speed: Your base walking speed is 30 feet.   Darkvision: Accustomed to twilit forests and the night sky, you have superior vision in dark and dim conditions. You can see in dim light within 60 feet of you as if it were bright light, and in darkness as if it were dim light. You can’t discern color in darkness, only shades of gray.   Keen Senses: You have proficiency in the Perception skill.   Connected to the Great Dream: You have advantage on saving throws against being charmed, and magic can’t put you to sleep.   Tree climbers: Elves sleep in the top of trees, so all of them have proficency in Acrobatics   Birdsleep: Elves don’t need to sleep lying down as humans do. Instead, they meditate deeply, remaining semiconscious, squatting or even standing up to one feet. They can even do it while perched in the branches of a tree. Since they look like birds when doing this, the translation for the Aknane word for such meditation is “birdsleep”. Elves can obtain the benefits of a 8-hours-long sleep with only 4 hours of rest, and it doesn't matter their position, and whether they have a a bed or not.   Languages: You can speak, read, and write Aztlani (Common) and Aknane (Elvish).   Tribes (Subrace): Ancient divides among the elven people resulted in four great tribes: Eagle Elves, Condor Elves, Owl Elves and Raven Elves. Choose one of them.
Genetic Descendants
Related Ethnicities