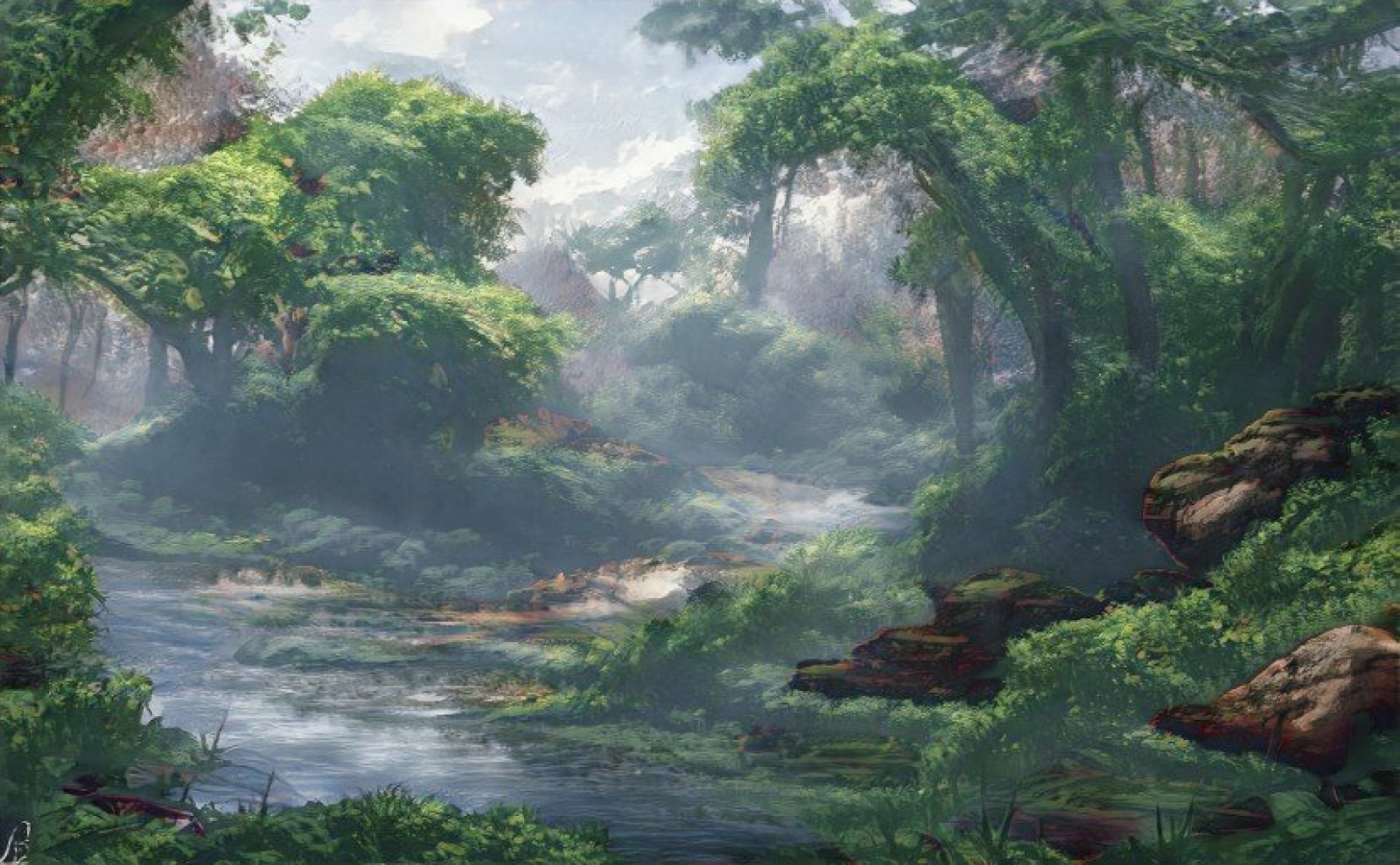 Were it not for the difficulty and cost of reaching the Risha river I would have send more expeditions there. Who knows what wonders remain hidden in the still unexplored parts of the jungle.
— High Sage Syronikir

One of the most famous and defining landmarks of the greater Mizarin region is the Risha River. Its many tributaries flow from the eastern mountains that form the border with Raitinshin. Due to all these tributaries the river dominates a gigantic area of the Mizarin region.   The dense jungle around it is filled with all forms of life and many areas near the river are yet to be explored by people not native to the jungle. Close to the river one can find many different clans of various Beastfolk. Some of them are better known thanks to trade but there are still many who remain a mystery to outsiders. Near the mouth of the Risha river there are various settlements all controlled by Nekorians, who are also the largest population in the larger Mizarin region.   Colonization attempts by other nations have thus far not been made. This could of course change if more important resources, such as Falls would be found in the region. 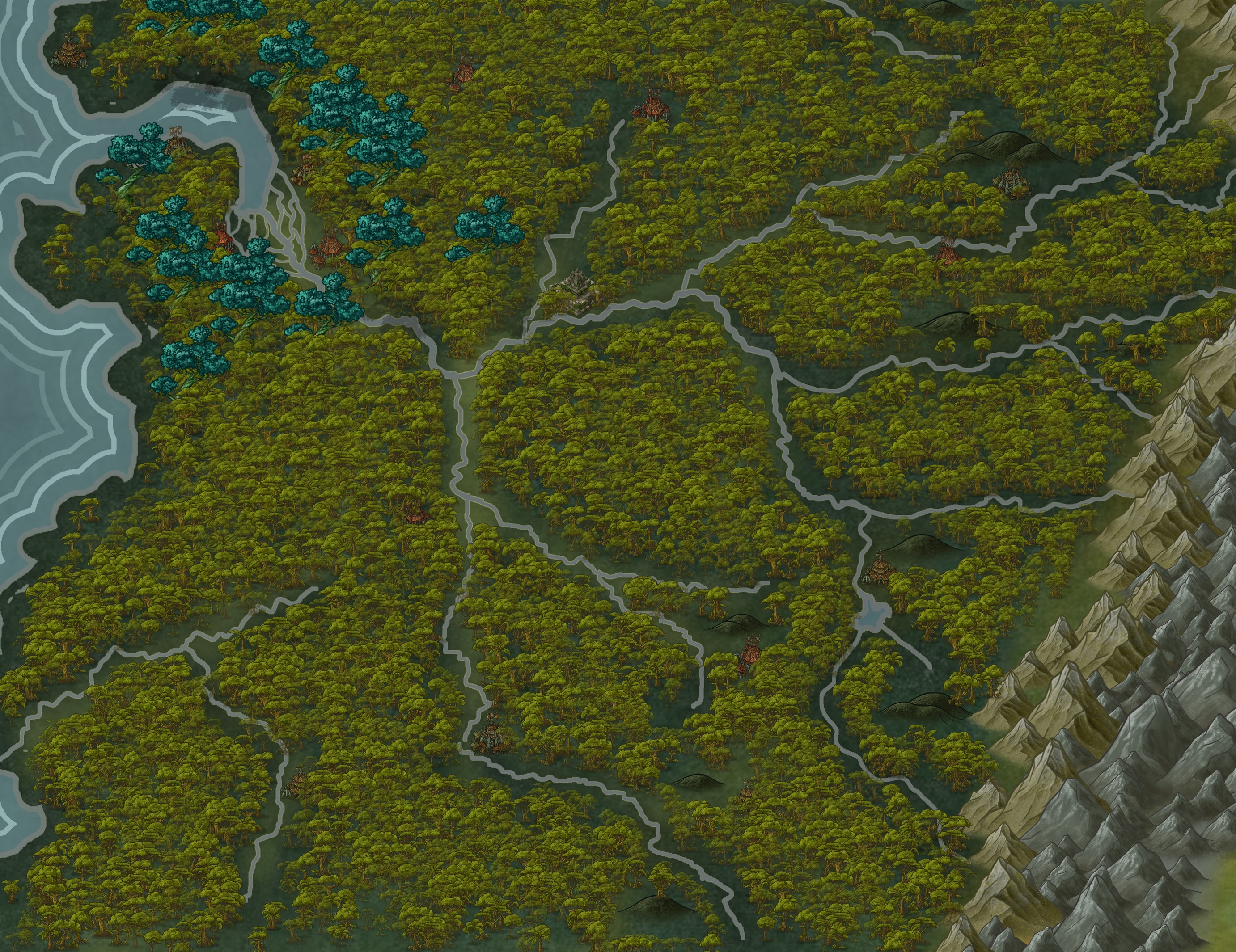 The area around the Risha river is controlled by many Beastfolk clans.

The entire area around the Risha River is filled with a dense tropical rainsforest. Therefore at first sight one would not think that there are many differences in the region. This is however wrong since some important landmarks and biomes can be observed even without travelling far from the river.

The mouth of the Risha river contains many small islands making it impossible for larger ships to travel farther. For this reason one can find many Nekorians settlements along the edges. Any ships that arrive from the Endamishi sea, the inner sea of the Mizarin region, dock and sell their goods here. From here the Nekorians send goods further along the Risha rivers using mostly Giant Turtles.   Just like the main Isles where the Nekorians live one can find a large amount of Mizarin Nightlights in the region. A curious sight for those who would visit is the large number of Nightlights on the islets of the delta. Some of these trees are connected by roots creating what is essentialy a continuous tree bridge from one riverbank of the delta to the other. This bridge also forms the main road between all Nekorians settlements in the river delta.   The largest Nekorian settlement, Yumara, in the region is located near the start of the delta. It is one of the busiest areas and when the Risha river is filled with Giant Turtles near the settlement.

This lake lies close to the Bandi Mountains to the east. It is the largest lake that is part of the Risha river. It is pretty far along the river so not many outsiders have ventured this far. Nonetheless it is still rather known do to the large settlement Vandaroch.   Vandaroch itself is the main home of the Kaerian Beastfolk, also known as Frogfolk. As amphibian creatures themselves they love the area around the lake and some of their buildings can actually be found within the lake itself. In contrast to their non Beastfolk counterparts they have a varied diet and therefore maintain several farms for underwater plants.   One of the main celebrations of the Kaerians is the yearly journey of many fish to the lake. The fish lay their eggs after which the Kaerians proceed to capture them. Since it is a bit of a sport for them it is frowned upon to catch a fish in another way then by using their hands or tongue.
Risha River
Open full size

These hills form an area that is known to be excavated for natural resources. The main exports are iron and gold. Gold itself is only used by a handfull of Beastfolk in the region but iron is highly coveted. Due to its importance the hills are perhaps the best protected area in the Risha river region.   Failing to do so can have disasterous effects. Something the previous owners, the Kitsunians or Foxfolk, had to find out the hard way. It is possible that the Kitsunians had taken the mines for themselves longer ago in the past but there are no records of this. Currently the Kitsunians are controlled by Arumians or Pangolinfolk. They have built a strong warrior society and quickly became one of the most feared Beastfolk in the region.   Many small triburaries of the Risha river originate from the Erano Hills. This makes the area a great place for settlements due to its abundance of fresh water.

Chimana is perhaps one of the biggest mysteries that can be found along the Risha River, at least as far as outsiders know. It is a gigantic building made out of a stonelike material although the exact origin is not really known. None of the materials or building methods that are used for the building are from anywhere near its location. To this day the identity of the original builders remains lost to time. If any of the local religions are to be believed the structure was built by the gods themselves.   The building itself has a pyramid form with terraces although it is far wider than other similar structures on the planet. It is divided into several levels through its terraces. Each level spans such a large surface area that Chimana itself is as large as a city. From the top of the buildings water flows down along several cascades. After going doing down a level the cascades fill the cannals of the level below. This in turn creates a large irrigation network across the entire surface of Chimana. At the edge of Chimana the water final flows into the Risha river. Where the water actually originates from remains unknown to this day.   Due to it ties to many religions in the area, Chimana has become somewhat of a temple city for the Beastfolk who live near the Risha River. At some point it was the capital a Beastfolk territory but now no single clan lays claim to it. It is now a safe haven for all types of Beastfolk regardless of their standing with the clans. Nonetheless Chimana is still controlled by a priesthood that rules perhaps more severely than some of the clans.

The entire area around the Risha river consists of tropical rainforests. This does, however, not mean that there are no differences between the various areas. Some aspects do stay the same along the entire. The most important of them are of course the high temperatures and the wet environment. During some parts of the year the rainfall becomes extreme but is nonetheless vital for the ecosystem of the region.
These giants are large enough to transport several people and a good amount of goods. Many attach some small wooden structures to the shells to make travel easier.

The Risha river itself has of course other creatures living near and in it than deeper into the jungle. Perhaps the most famous example of creatures that live in the area is the Giant Turtle. They are impossible to miss because they are used as the main form of transport on the river itself. Although boats are used, the Beastfolk in general still prefer the turtles.   Besides that there is a large variety of fish, frogs and insects that live in the river. Many types of large snakes and other reptiles, such as crocodiles, can be found near the Risha. If someone is unlucky they can encounter a spinosaurus which is a real menance for everyone near the river. This is, however, a rare occurence as the amount of living members of the species is fairly low.

The rainforest near the end of the Risha is different from the one that is found higher up. In contrast to the reast of the rainforest, Mizarin Nightlights can be found here. Since these gigantic trees take up a large area of the canopy only smaller plants that don't need a lot of sunlight can be found at the bottom. The amount of Mizarin Nightlights differs per area. In areas with more of the Nightlights there are not a lot of large trees other than them.   The creatures living in the lower rainforest also differ from the rest of the forest. The main inhabitants near any Mizarin Nightlight are Nekorians since their religion is heavily tied to them. Other Beastfolk do live in the area but the Nekorians a large majority. Due to this there is also a larger amount of ORC's and dinosaurs living here. For some reason they never attack Nekorians and often follow their orders. In areas not controlled by Nekorians dinosaurs are often hunted as their are deemed to dangerous to roam free.
Risha River
Open full size