Many on Niorath don't know anything about nations or races that existed before the Avaronian Era. Those that have studied history understand that their importance and legacy can not be overlooked. The Selefer is one of these races.   They maintained an empire that possible even matched the Avaronian Empire in size and power. Just as the Avaronians they were knowledgeable about magic and it is possible that the Avaronians actually got a lot of their knowledge only after conquering them.   The aspect of the Selefer that interests me the most, however, is their supposed involvement in at least 2 of the worlds cataclysms. If this is indeed true their could be dangerous relics in their ancient ruins. As the Keepers we can't have these fall in the wrong hands if we want to prevent such events from transpiring once more.
— High Sage Syronikir

The Selefer are one of the most mysterious and least known races in Niorath as they are believed to have disappeared several millennia ago. The snakelike humanoids are believed to have lived in the hottest region of the planet and are said to even have been able to live near volcanoes. The race has left many ruins behind but there is still a lot that remains unknown.

Determining the biology of an extinct species is never easy. Luckily the amount of art and writing the Selefer left behind have given researcher an easier time in determing the basics.

The Selefer have are a snake like humanoid. They have no legs, only a tail. They however do have a humanoid torse with arm which enable them to perform the same task as any other humanoid species. Their heads are often the same form as that of a cobra although other snake like heads can occur as well.   The mural art they left behind in their ruins tells us that they have scales which could be of various colors with darker or brown colors being more common.

Warmer climates seem to have been the preferred climate of the Selefer. In their art they often showed deserts and jungles but so far no Selefer ruins have been found in any jungles. However, it is believed that the Selefer have lived in the jungles of Niorath and that it is just a matter of time before their ruins are found there.   Recently ruins have been discovered near the Arkash Volcanoes which makes many believe that the Selefer lived there as well. It is not certain how well adapted they were to this environment but since they had settlements here the Selefer are assumed to be better in regulating their temperature than the average snake.

By studying Selefer murals historians have been able to verify that the Selefer did indeed reproduce through eggs. These seem to have been placed in specific chambers which were designed for brooding. 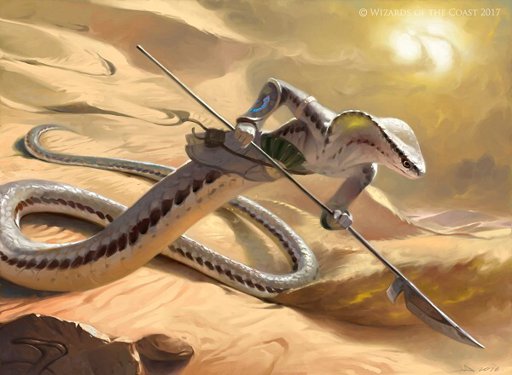 Selefer by Wizard of the Coast, Magic The Gathering

3.2 m in total including tail but typical stand at 2.2 m height.

Unknown: no sources have been found to make estimation of average lifespan 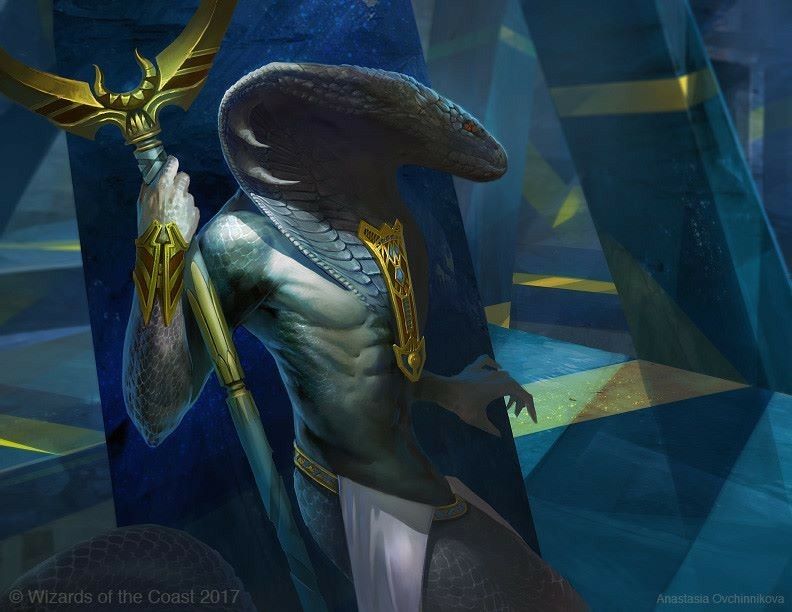 by Wizards of the Coast, magic the gathering

Religion seems to have been one of the most important parts of the Selefer society. Every settlement had several places of worship and the majority of the art are of religious nature. From their writings historians have been able to deduce that they worship several gods, most of them related to fire or the desert.   The most important god of the Selefer seems to have been Athos, a gigantic snake made of fire. According to the religious art it seems like this god resides in the Fire Realm. Only the chosen, the children of Athos, are allowed to attune to elemental power of the Fire Realm and join Athos.

Since their nation is long gone there is no method of getting a complete idea of how the Selefer culture worked. Some murals and writings, however, have given historians a small insight.   It appears that the priests of Athos were the leaders of their society and that many types of festivals were organised by them. They oversaw the construction of buildings and works of art, mostly in the form of murals.   Besides buildings and murals they left behind some other pieces of art like statues and figures. Most of these seem to have been made from basalt and were often depictions of Selefer, snakes or Athos.

Yamaderis misplaced this image by Kefkjaco with heroforge
Historic records about the Selefer are scarce. This is mainly because their empire existed several thousands years ago but also due to lack of historic accounts of them kept by the Avaronians.   This is then partially the fault of religion since the myth of Mackevor, the founder of Mackevism, tells us that sacrificed himsef to defeat the Selefer. As to not ruin the myth the Avaronians most likely kept very little records of the event.

With Avaronian accounts historians have only been able to verify that the last known location of Selefer was in the Volker Desert, with some debating that it could also have been at the nearby volcanoes. Whether the myth is true or not a cataclysmic event happened near the Volker Volcanoes. This has been verified by the Dragons as well.

There are a lot of Draconic accounts about the Selefer. The problem here is that the organisation which has those records, The Keepers, has not released them to outsiders. The only verifications that they have given are the following :

Answering: "an ethnicity surviving in an inhospitable region"
Visit Kefkejaco's Competition Page Check all other answers to this prompt Competition Homepage

This article will still be expanded. I am thinking about creating an extra subscriber group for stuff that only people in the Keepers organisation would know.

Great article! They sound super interesting and mysterious... yes, I 'd like to know what the Keepers know :p   I'm very intrigued by those big cataclysms and what role they had in them, since I remember your primer...

I will try to make a new subscriber group for that perhaps :p