All Gnomes know the story of the Divine Golem of Tanajin. The legend was even more alive among my civilization since we were descendants of the Gnomes that survived that mythical war. It is the event that forced us underground and it only strengthened our hate for the Selefer.
— Yamaderis

Even though the Gnomes are quite spread out over the world they all know the Ilbon myth of the Divine Golem. Some view it as a fact and although there is likely some truth to the legend it is impossible to verify.   According to the legend the Gnome God Tanajin created a powerful construct of enormous size known as the Tanajin's Juggernaut, or the Divine Golem to the believers. This weapon of destruction was used in a war against the Selefer. That war ended in a cataclysmic event and its effects are still clearly visible today.

In ancient times above the surface our God led us along. His vision was clear and his rule was just, he truly was the best of us all. But as he sat on his crystal throne, our God Tanajin grew restless.
His high priest saw his somber facade and inquired his lord "Oh Divine, I see you hurting and don't know why. The people love you, the life you gave us is great. Is there not anything we can do the repay?"
Tanajin's lifted his face and looked him in the eyes "Don't worry my child, my life here is good it is only company I crave. In the centuries that have past I found not a single God here, they all have gone to the heavens. If only I could travel further and look for them, alas I can't leave this behind"
The high priest pondered on his words and returned the next day.
"What if I stayed in your stead and lead the people here? You could go on your journey and create a new realm for us there."
The room seemed a little brighter as Tanajin stood up. "You are right I can leave some of my children here and take the others along. We will travel across the ocean and spread out there, the adventure already lifts my spirit. You are wise my child you can have the crystal throne until my return." 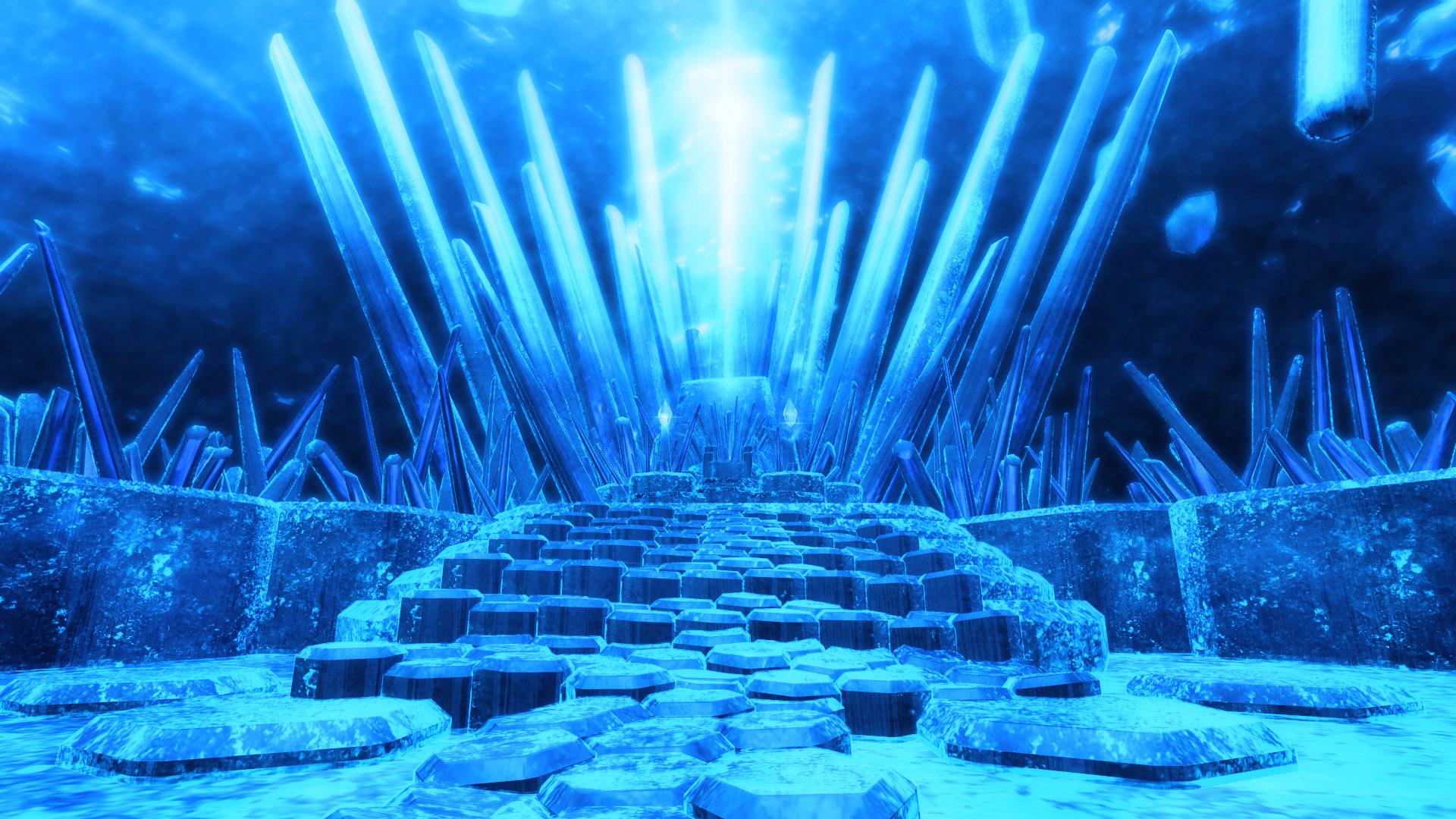 Yamaderis misplaced this image by Kefkjaco with heroforge
Tanajin started making preparations for the journey but also needed to find a way to protect his people against sea. He decided to create a golem so large that it could walk through the oceans. A path would be created that the ships of his children could follow across the vast blue expanse towards the west.   For a 100 days and a 100 nights Tanajin worked on his creation. During the last night he produced a lightning bolt and breathed life into the Divine Golem. With his work done he set out with numerous ships in the wake of this creation.   The journey was long and hard but after fightning off large sea snakes, metallic monster of the deep and ferocious storms, the Gnomes arrived at their destination. The new realms became beacons of light and hope in the western continent now known as Farlis. But great nations create jealously among the lesser ones.   Meanwhile Tanajin continued his search for another God but remained unsuccessful in his endeavour. Along the way he did meet new friends and allies, especially the Dragons of the west, were welcoming to the Gnomes.

Sadly the peace did not last as the vile Selefer, who were jealous of the Gnomes, devised a plot. While Tanajin was away on a search they attacked the Gnome nations. Tanajin himself did not hear about this vile plan and could not aid his people in time.   At first the Selefer laid waste to the Gnomes but once Tanajin arrived the odds turned. The true power of the Divine Golem was revealed as it laid waste to entire armies of the Selefer. Fear grew in the hearts of all those that laid their eyes upon it. Battle after battle ended with the evildoers fleeing.   But the Selefer were yet to start their most devious and evil of plots. They used magic which any sane person would avoid at all cost, the Primal Chaos. As the Dragons and Gnomes joined hands for the final battle the Selefer put their plans into motion. The strongest Selefer mage, the Snake Devil, stood in front of the Divine Golem. He mustered ancient and alien words which should not be heard. In one moment the battle ended and all combatants were gone. Our Tanajin finally joined the other Gods in the heavenly realms, but the Gnomes would never see him or the Divine Golem again.

Since all Gnomes in Niorath have some version of this myth it is believed there is at least some historical basis to it. A few things of the myth are indeed verified to be true. For example the crystal throne does exist although it is currently controlled by the emperor of the Crystal Empire. Although the imperial family claims to be descendants of the original high priest, it remains a topic of debate. Most of all because they are Dragons which is never mentioned in many versions of the legend itself.   Another verified aspect is that the Gnomes who currently inhabit Farlis did indeed migrate from the east. The war itself between the Selefer and the Gnome-Dragon alliance is also present in various other accounts.   It is assumed that the current Gnome population in the area of Kevarim are descendants of the Gnomes that were taken as slaves by the Selefer after the war. The ones that escaped were likely the Gnomes that went underground into the Lower Realms and built a civilization there.

The war resulted in an area that is still cleary visible as being affected by chaos magic, the Silent Forest. The magic that was used by the Selefer petrified the vast majority of the forest, destroyed all settlements and either killed or mutated the inhabitants. Adventurers who survive an expedition into the forest tell tales about monstrous Gnomes, Dragonborn, Snakelike creatures and even Dragons that are cleary corrupted.   The area is today extremely dangerous to travel through. Anything that comes to close to the Chaos Crystals in the forest is likely to develop mutations and those that stay long become shells of their former selves and mutate in grotesque ways.   This has, however, not stopped people from trying to find the Divine Golem who they believe could still be in the area. None of these expeditions have returned so far.   The Selefer themselves lost many soldiers but their home territories remained untouched. They enslaved surviving Gnomes and their empire would exists until its demise by the Avaronians.
Silent Forest
Open full size
The Silent Forest is believed to have been the site of an ancient battle which went terribly wrong. Today it is a haunted place filled with petrified trees, permanent mist and according to survivors untold horrors.

In general there are two versions in Farlis. The one that is told by the Gnomes living neer the Volker desert is the most commonly known by outsiders. It is also the one shown earlier.   The other version is told by the Dragons and Dragonborn since they were also part of the war with the Selefer. They focus less on the Divine Golem itself and more on the vile diabolical magic used by the Selefer. According to them the Divine Golem was off some help but in the end the Dragons were the ones turning the tide until the cataclysmic end of the war.

In Oneraga the myth is told as well to some degree but it does not mention the war. This is most likely due to the fact that less details about it arrived back to the homefront. It's main focus is on all Gnomes helping in the construction of the Golem. On the departure they feel a sense of loss which they claim was caused by the eventual loss of Tanajin.   The rest of the legend is about the high priest taking up the role of Tanajin after he left. When the god finally went to the heavenly realms he kept the nation together and introduced a new age.

Currently Tanajin is still the main god of the Ilbon Pantheon. To his followers he is seen as both the father of the Gnomes and the one who breathed life into the Dragons. Many of his direct underlings were Dragons and some of the Dragon nation's leaders claim to be descendants of these Dragons from ages ago.   His domains are wisdom, trade and craftmanship and many artisans make frequent sacrifices to the god to get divine inspiration.   His knowledge and creations are said to have helped his side during The God War. When that war ended due to Magicfall he is believed to have been the only Prime Asmer who remained on Niorath. His life on Niorath is said to have ended in the Silent Forest in any version of the Divine Golem myth. 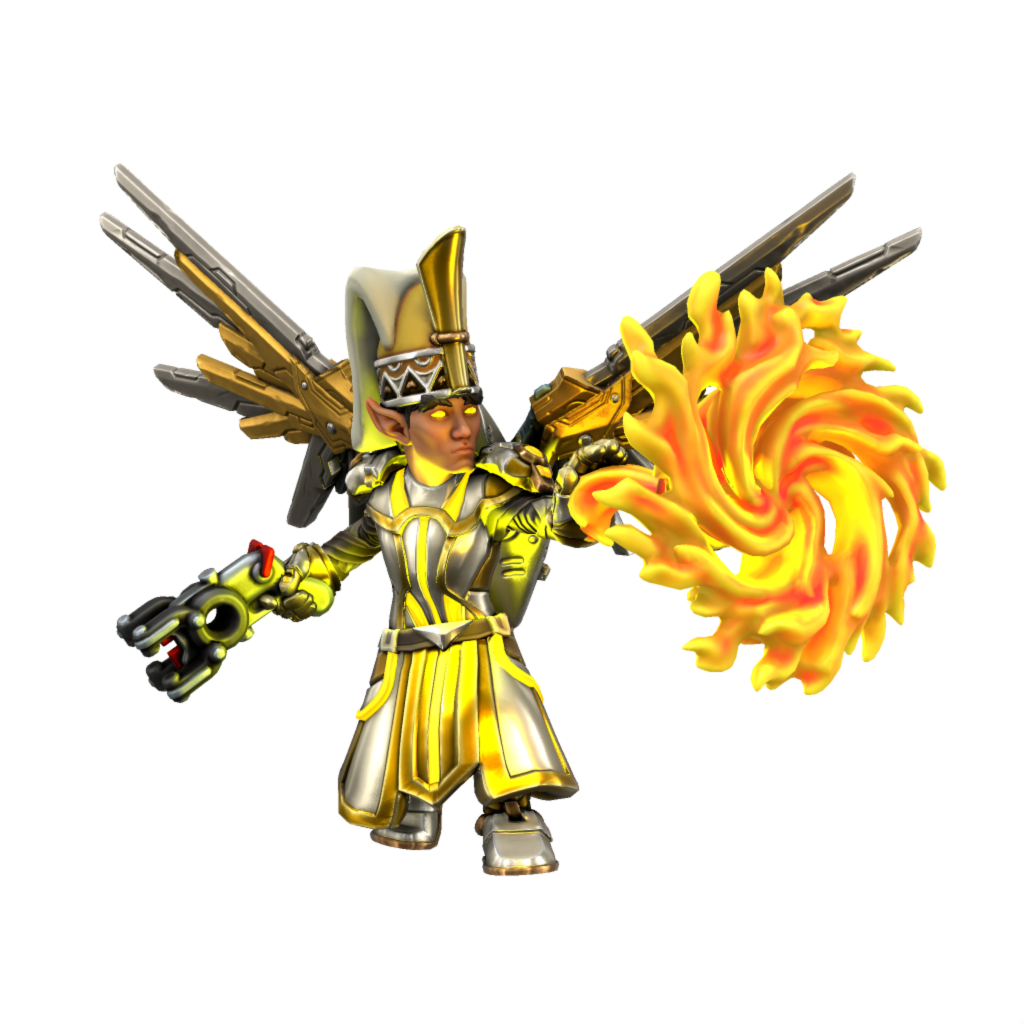 This is a nice myth, and I like the way you've chosen to format the article itself, with the presentation of the myth and then the discussion around it.   A small comment I have about the format is regarding your quotes, adding a line break or paragraph break between different speakers is a rule for prose, and it gets confusing when everything is in the same paragraph.   Comment regarding the myth itself now. I like the myth but I think a few details are missing to make the article feel complete.   I was excited to have learned more about the Selefer, they are just my fav in your world :p I think the myth section is missing a small conclusion to mention what happened to the Selefer. I gather than since you mention later that they were defeated that most of them died because of the magic they used? How many of them did vs survived? And that was only their warriors who got hurt, right? Did the rest of the population lived on for some more time or was that the event that triggered their extinction?   In the myth, you can also add that the Selefer enslaved many gnomes and moved them to another location, since when later you mention that some gnomes are descendant of those enslaved ones, it comes a bit out of nowhere.   You can also maybe add a bit about Tanajin and if they are still worshipped among today's gnomes or if it's all just a cute story for them.

Oh I will take those format changes in mind, see how I can mix it around :)   Well everyone nearby the event did die but the Gnomes themselves were not able to recover from it since they lost some very important areas to them. And with the dissapearance of their leader and god they were indeed enslaved by the Selefer who did have a larger population left. That would indeed be a good idea to mention somewhere   As to Tanajin himself he is still worshipped by the western Gnomes but less by the eastern ones where he is rather seen as an origin god who gave his rule over to Dragons. Will see where I can squeeze that in :) Thanks Amélie!

An Interesting Myth, True or not, its a good article.   Aemon