The warriors of Orfordwhelm are famous. Equally so is the country known as warlike, untrustful and their kings as stubborn as mules. While outsiders and subjugated find them threatening, the country finds itself strong, stable and united to keep their policy and culture strong and alive.
— Everam, Teller of Nimenra

Orfordwhelm is one of the four largest countries in Telamirein. While the Orfordsmen is known as a warlike culture, Orfordwhelm is a culturally diverse country that has subjugated several of its neighbours over its existence and gained a reputation as a country of excelling warriors, stubborn traditionalists and multiculturality. As it has expanded its borders aggressively the last 500 years and broken treaties over it, the two other larger countries of Nilaminra and the Kingdom of Ravero have been watchful of the conqueror in the east.

A large majority of Orfordwhelm's inhabitants are not Orfordsmen by culture. Many are instead of subjugated people that once were independent countries that ruled themselves. About 40 % of the about 600 000 inhabitants are of Orfordsmen ancestry while the largest of the other cultures are the Leorowis culture 10 %, mainly from the occupied areas of Leonerd and Willrowia. There are understandably dissent among the Leorowis due to their late subjugation and annexation of their country. This has made at least the areas where the Kingdom of Willrowia once had its territory an area of harsher laws and control. Leonerd's territory, however, was treated differently due to their artisans and the road to Marlun, having still nobility and leadership structure intact.

From a vassal and small border country to the third largest and subjugator, Orfordwhelm has grown large in size since it's freedom from Kyrkas. From their former core territory and ancestral lands, the Orfordians grew and colonized what was once the outer territory of Kyrkas and made it their own.

Once one of the largest and domineering countries, Kyrkas core territory is in 2543 an incorporated part of Orfordwhelm since they were taken over in 1035. The old capital is now a small settlement more or less with a loss of grandeur and no castle to defend it since the rebellion in 1312. A large part of what was Kyrkas outer core has become the core territory of the Orfordians who have moved in and forced out the native people and their culture. The Woldbear-country, a plains and hills shire, was divided away from the traditional and administrative territory of Kyrkas and made more or less its own county. This area has large pasturelands from what was once the ancestral and sacred land to Kyrkas. While assimilated, the Kyrkas' territory is still in decline due to the history shared by the two peoples. While the nobility that has moved in has hauled treasures and riches, the people, even the surviving old families of Kyrkas, has a poverty level of wealth. Overall, the province has about 20 000 people living within it.

A former feudal vassal to Kyrkas, this eastern country was an ally to Orfordwhelm for many years. Huren was known as a country of mild speaking nobility up until Kyrkas fell apart and the nobility took their chance to declare independence. The ancestral lands of the Hugonir and Runorer, these people have lived side by side for many years prior to Kyrkas claiming and later annexing the region. When created, Huren was the location of old, unknown ruins and only a single populated "town" of 1000 people while the rest was more nomadic in nature. This changed and today, close to 1200 years after the annexation, Huren has culturally become a stable province of miners that mine iron, silver and other ore for metals in the eastern mountain. Agricultural lands with horses roaming the plains and cattle in pastures is a common sight. It also houses the remains of an old Dwarven settlement.

Famous warriors have always sprung from Orfordwhelm. Being largely a society of warriors and the martial strong leaders, the military is an essential part of both culture and country, more so in the areas that have been subjugated. Several strategic forts dot the landscape, some old deterrence against Orfordwhelm turned into assets for control by the kings and dukes overtime.
While still mainly a large part levy forces when in times of war, many still practice and are accomplished martial, athletic and military figures in nobility and higher classes all over the country. As the primary way of electing an heir is though the tradition of the "tung-duel", the traditions of war has survived since many ages back. As early as five the boys are looked upon if they have the characteristics of a strong warrior. The organisation of combative events by the army is common to select warriors for the higher military divisions.

The Eight Pantheons are the accepted religious organization in all of Telamirein with some diversions among the countries. But in Orfordwhelm there has always been a strong connection to the God Orios, Warrior-God of Death, Men and Youthfulness. He is seen as their patron god and the armies of Orfodwhelm ever since He stood by their side during a battle against their enemies. This is also why many of the other Gods are neglected by the Orfordians as a whole. While not a problem in itself, the Orfordians have gone the extra length usually to diminish the other Gods from their territory. Many shrines that once was dedicated to the Gods are now uncared for or demolished for other purposes. A prime example of this is in the former capital city of Willrowia, Brinnia. This location has always had an importance to the God Rhyn for its many Willowtrees and the mighty and sacred tree called Red Hallowed. While still a religious location that pilgrims to it, the Cult of Orios has grown in the town and have actively engaged the priesthood of Rhyn, even taking one of the temples for themselves.
Local deities have also become less important. Some traditions have been replaced with Orfordians once like Oxer Day. 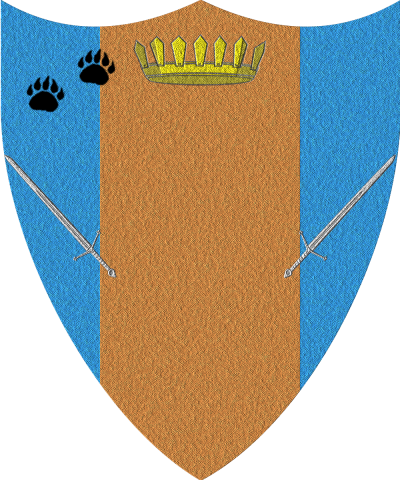 In war, were created

Type
Geopolitical, Kingdom
Demonym
Orfordians
Leader Title
Chief-king of Orfordhwelm {English}
Government System
Kratocracy
Power Structure
Feudal state
Economic System
Mixed economy
Currency
Orfordwhelm has its own silver coins that are minted in the core territories of the Orfordsmen. However, bartering system is still largely the most common idea of trade and coins are almost always refused in smaller villages. There exists a coalition of these villages and small towns that use the old Thals currency in the southeastern corner of Orfordwhelm.
Official State Religion
Cult of Orios {English}
Official Languages
Controlled Territories
Neighboring Nations
Notable Members
Related Ethnicities

I really like how this conquering empire is known for the varying cultures within it. I would love to know more about tung-duel.