The Mashendian language is spoken across the Northern Plains and by the Dorins of the Dorish Empire. It is a cousin to the Asikian and Arrothi languages.

Note: This page is still a partial work in progress. More is to come.

The Mashendian language uses the Tabaro writing system. Tabaro is a phonetic system originating in northern Nerasia.   The Tabaro alphabet has 30 characters, and five diphthongs. The script's straight, angular lines and large dots (often created in artistic renderings with separate colors) are traditionally created with a specific stylus that is narrow on one end and blunted on the other. A writer will create thin lines with the narrow end of the stylus, and flip it over to create consistently-sized dots with the other end of the stylus.   Coming soon: Alphabet and punctuation

All r's are trilled or lightly rolled, especially when at the end of a word. When spoken properly, all consonants are clearly pronounced, especially t's and d's, which receive a slight pop when closing out a word.   In words with three syllables, the emphasis will most often be on the first syllable.   A helpful rule of thumb for reading Mashendian verbs in the infinitive: If the verb ends in a t, the accent will be on the last syllable. If the verb ends in another letter, the accent will be on the preceding syllable.

Here is a quick guide to sounds in Mashendian that may not be pronounced the way you expect:   Specific pronunciations can be found for every word in Mashendian in the official Google Doc dictionary.

The suffixes of verbs change according to their tense and subject. The following chart shows the verb endings for the present, past, and future tense. Note that the plurality of the subject has no impact on the verb's suffix. (In other words, "I run" is "Ne stamae," and "We run" is "Nu stamae;" the verb form does not change.) 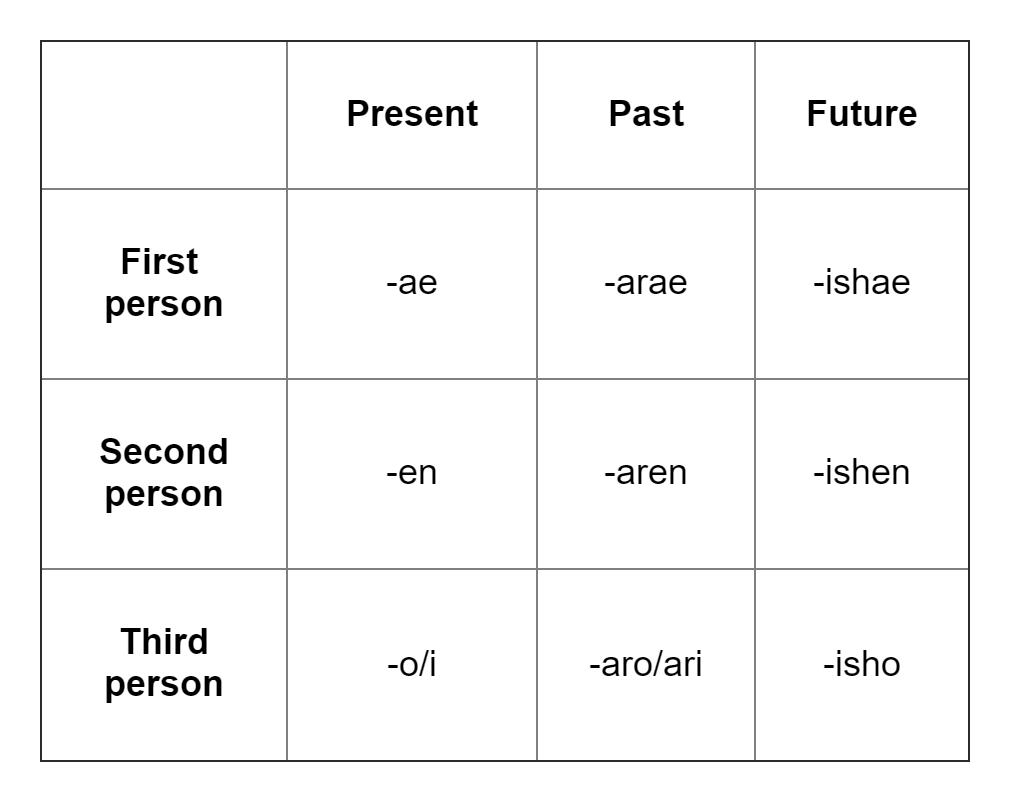 Note that the third person present and past has two forms. The o endings are more common, and are the default. In some cases where verbs use the i endings, it will be indicated in the notes in the official Google Doc dictionary.   The future tense does not ever have the i ending. This is because its suffix originated from the word ushit (to go), which is usho in the third person present tense.   Conjugation in action   To conjugate a Mashendian verb, remove the ending of the infinitive form (usually -it or -is), and replace it with the appropriate ending for its tense and subject.   Examples:

to learn | chatis (The base verb form is chat.)

to jump | nagit (The base verb form is nag.)

We will jump | Nu nagishae

You will jump | Se nagishen

It will jump | Te nagisho

Exceptions and special rules   With verbs that have a base form ending in an r, that r will be dropped in the past tense. Take nastrit for example, which has a base form of nastr. You could think about it as losing that r in order to gain a new one; or, you could say that in the past tense, an added a has jumped inside the word, just before the r.   Here's what that looks like:

Verbs that have base forms ending in "sh" will use the future tense endings of -isae, -isen, and -iso, rather than the typical -ishae, -ishen, and -isho. For example, the word for "bow down," stashit, becomes stashisae, stashisen, etc., rather than stashishae, stashishen.

Here is the verb stashit conjugated in present, past, and future tense (respectively), in the first person singular:

I will bow | Ne stashisae

To change a verb into a command form, remove the infinitive ending and replace it with -eir. (Pronounced like "air," "stare," "bear.")   Examples:

to attack | hashit (The base verb form is hash.)

Many verbs have corresponding noun forms. This is typically just the base verb form, occasionally with the letter "-a" added to the end.   For example, the verb "kabrit" means "to drink." If you want to refer to a beverage (a drink), you would use the word "kabra." Similarly, "nerantis" is the verb for "to tell a story," while "nerant" is the noun, "story."   Another noun form, one that describes a person who does an action, is found by adding "-o" to the infinitive form.   So, a drinker is "kabrito," and a storyteller is "nerantiso."

Mashendian has eight basic pronouns: Four in the singular, and four in the plural. The pronoun form is the same for objects and direct objects.   Mashendian does not have separate words for "he" or "she." Le is a generic third-person, singular pronoun that is used for a person of either gender. Te is a third-person pronoun that is used for inanimate objects and animals. The rare exception may be for very well-loved pets, but even then, using le instead of te might get you some funny looks. 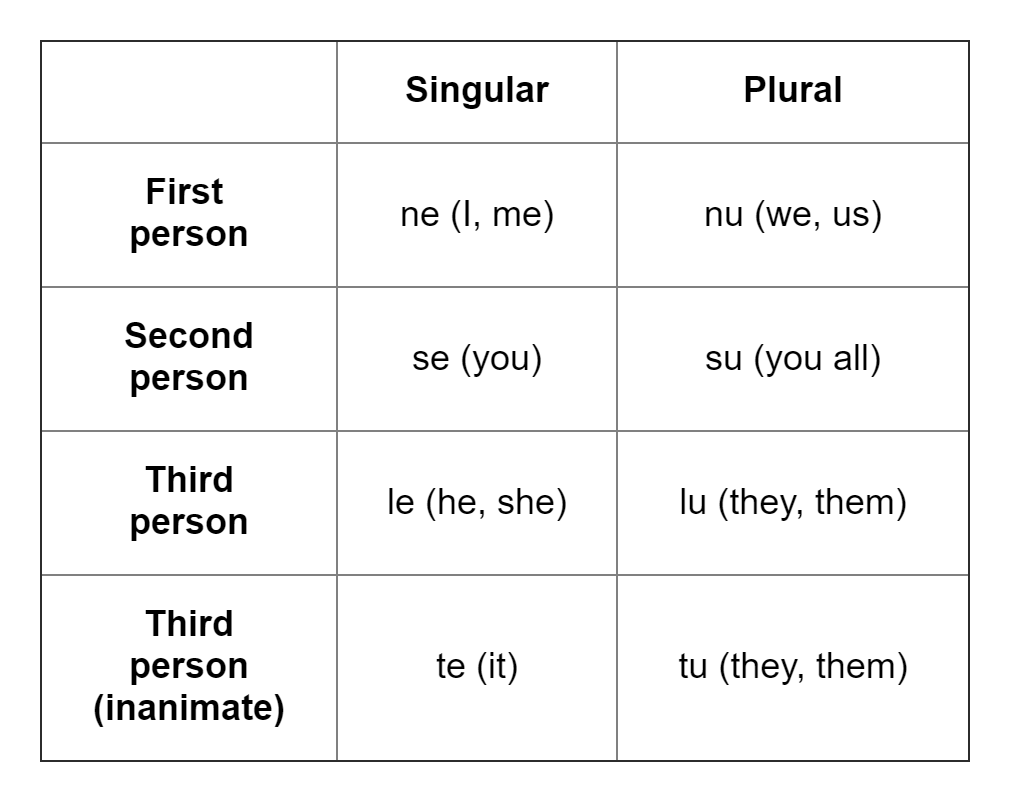 To make a noun plural in Mashendian, you add -e to the end of the word. Exceptions: If the singular form ends in an a or e, replace that vowel with an i. If the word following the noun begins with an e, add -i to the end of the noun instead of -e.   Sample words and phrases:

To make a noun definite in Mashendian, you add the suffix -en (singular) or -ene (plural). In the case of nouns that end in a, the a is dropped in the definite form.   Sample words:

"You slay the monster." (Translation)

"You the monster slay." (SOV structure)

Adjectives go after the words they modify.   Sample phrases:

Adverbs go before the words they modify.   Sample phrases:

Prepositions come before the direct object they modify.   Sample phrase and sentences:

"I quickly throw a big leaf at the girl." | "Ne elet grot bastut kratae a stameiren."

You can turn a verb into the negative by adding the word jes before it.   Sample sentences:

The word jes can also be used in the absence of a verb, so long as one is implied.   For example, in the previous example, most Mashendian would drop out the second "sagrishae" as redundant, and simply say: "Ne se sagrishae. Ne le jes."   Further examples:

The full vocabulary of Mashendian words, including their pronunciation and other information, is located in the official Google Doc dictionary.

It is worthwhile to understand the difference between the words torit and hamit. Both verbs mean "to be", but are used in separate situations.   Torit   Used for:   Examples: 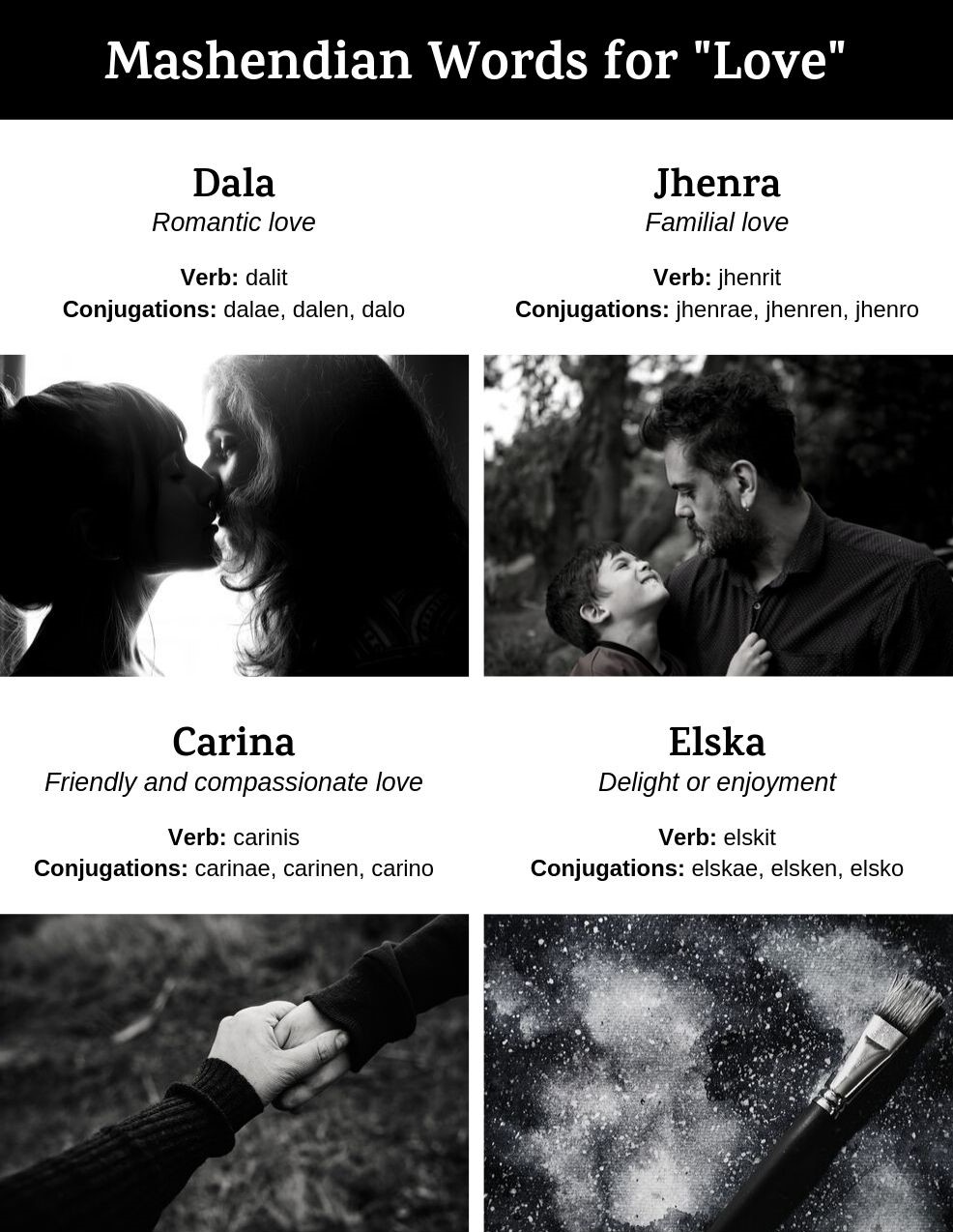 Here's how to count to ten in Mashendian: To count by tens, to one hundred:   10. ash 20. askha 30. ashnote 40. asho 50. ashmute 60. ashkaf 70. ashbrot 80. ashviyae 90. ashchof 100. latur   Counting by hundreds follows the same rule as counting by tens, except "ash" would be replaced by "latur." For example, "four hundred" is "latursho," and "seven hundred" is "laturbrot."   Complex numbers are written in the order of single digits, tens, and then hundreds. So, "fifty-eight" is "vi ashmute," and "nine hundred ninety-nine" is "cho ashchof laturchof."