Umbria has restored a lot of laws from the Santuarian Empire, being a laic government without priesthood representatives on the council. Also, despite being the Uz cult the official religion, other beliefs aren't persecuted.

Capital penalty is rare and only applied in the direst circumstances. Helping the victims is the highest priority in the umbrian law, as well as preventing abuses of power. Slavery is illegal. Its forbidden to buy and use slaves, but war prisoners whose ransom isn't paid can be sold to other realms.   Weapons right, freedom of expression, proper judgement and inviolability of one's home are considered basic rights. Legal Fraud, the malicious use of legal loopholes, is severely punished.

Their arcane universities give them access to an unusual number of properly trained mages, which is their main strength. Their navy is also very powerful, being the main naval force in the Serpent Sea, bolstered by their elisian admirals and navigators.

Previously it was an aquisgranian duchy, made independent during the war with the werebeasts. It was a difficult time, the Dawn Kingdom was pressing and imperial aid never arrived so they decided to cut all ties, not only of spite but to be able to grant the mages some privileges in exchange of their help on the wars.

About a 70% of the population are humans, with a 25% of elisians (Mostly in the aurenian marches and the Nicarian Island), the other 5% are mostly elven and dwarf minorities

Umbria is divided by marches, ruled by marchises:

According to the militia laws, every able bodied Umbrian subject between sixteen and sixty years forms part of the policial force, or the Watch. The Watch is not only entrusted with keeping the order and protecting their villages and cities, but can also be called to defend the Prince or the realm. Such call can only be done by the prince and transcends feudal ties, the Watch can only be called to protect the princedom against foreign invaders, no one can force them to go out of the Umbria borders, but they are more than welcome to aid outside them if its their will.The Watch is a force to be reckoned with, as are better armed and trained than the levies of other countries.

Another force is the soldiers and knights the feudal lords can gather, they are loyal indirectly to the Prince due the feudal ties. This force is relatively weak, at least compared to the Aquisgran Empire and the Dawn Kingdom. The Umbrian constitution establishes how many soldiers and knight each lord has to provide to their liege according to the fief size and the size of their personal army but each individual lord can send more forces if they want to.

Another core feature of their army are the mages provided by the Militant Order, in accordance to the treaties that established the priviledges of the University. Better trained than any other nation besides Tenesia these wizards are truly feared as the key to the success of the princedom.

In mundane development, Umbria is pretty close to the late middle ages but has a flourishing magic advancement. Currently, the magic development doesn't make a sizeable difference except for some machines like the Umbrian Submergible Ship or the Glass Coating technique but it's certin that it won't take long until the Principality will change forever the shape of the battlefieds.

The oficial religion is the Uz Cult but unlike other believers, the umbrians are more secular. No belief nor lack thereof is legally persecuted and citizens are free to chose their beliefs.
On the other hand, has to be remembered that bishops are feudal lords like any other, with the same rights and duties besides the fact that the title is not inherited but appointed. Such lords are likely to be more gentle towards the more faithful commoners and more harsh towards the heretics.
In practice, the faith of Uz is pretty much dominant but several sazzarire minorities can be found. 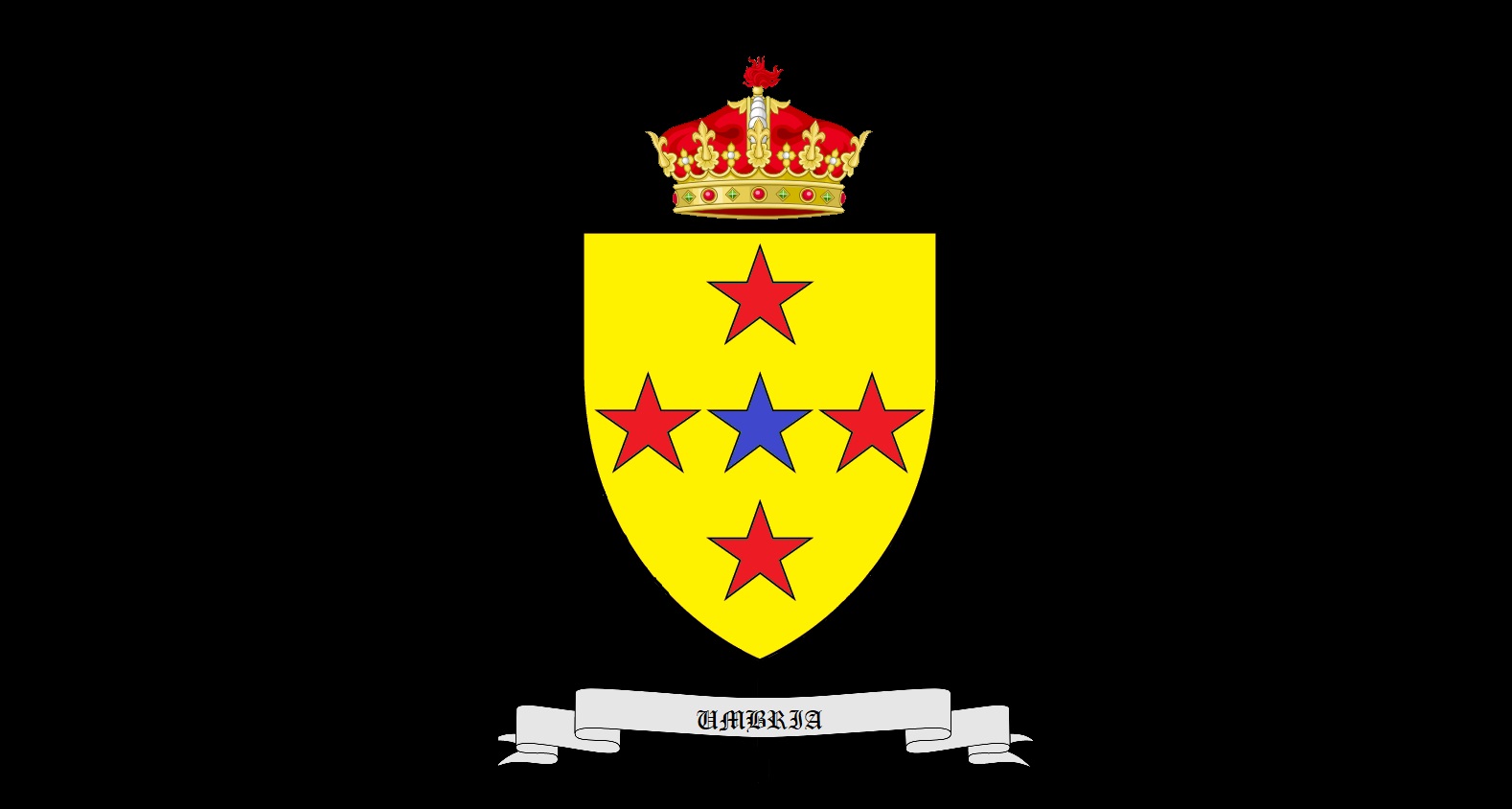 Our swords will break our chains

Founding Date
251
Type
Geopolitical, Principality
Capital
Baneria
Alternative Names
Umbria Duchy, Banerian Empire
Formation Type
Umbrian Fire Squad
Demonym
Umbrian
Leader
Princess Arsenda III
Head of State
Princess Arsenda III
Government System
Monarchy, Constitutional
Power Structure
Federation
Economic System
Traditional
Currency
The main coins are the Pound, the Silver Crusader and the Money. The Pound is woth 12 Crusaders and the later is worth 20 Moneys.
Legislative Body
Umbria is a pactist monarchy, the Great and General Council, together with the Prince, is in charge of drafting umbrian laws. The Council and the Prince must agree to make laws.   The Great and General Council, formed by one hundred parliamentarians chosen at random every two years, appoints the Chancellor and the Supreme Ambassador, who can be dismissed in the same way.   The Chancellor is the maximum responsible for economic policies and to keep the kingdom's finances in perfect condition.   The Supreme Ambassador is responsible for coordinating relations with the outside world.   There are four social classes, one of them being the Magisterium, a class in which their individuals belong to one of the other three, although it is important enough to be a class in its own right. A member of the Magisterium may be a representative of the Magisterium or its other establishment but never the two at the same time.   Nobility: Composed by the prince, the marchises, barons, chatelaines, and knights. The old aristocracy of Umbria has 30 parliamentarians of the Grand and General Council being the majority force in it. They are 5% of the population.   Magisterium: A great power in Umbria, few citizens dare to question the power of universities. This class are represented by no less than 30 parliamentarians. They are 10% of the population.   Bourgeoisie: They are the merchant class, although much of the trade falls on the Nobility there is this social class for merchants of great importance but humble birth (although many of them actually work for the Nobility). They have 20 parliamentarians. They are 12% of the population.   Commoners: The working class, would represent 78% of the population, they have the remaining 20 parliamentarians
Judicial Body
The Supreme Court is the highest judicial body and is chosen by the prince. The High Judge of the Supreme Court is elected by the vote of the Court judges themselves.
Official State Religion
Sanctuary Holy Land
Subsidiary Organizations
Deities
Location
Umbria Peninsula
Official Languages
Related Ranks & Titles
Controlled Territories
Neighboring Nations
Related Items
Organization Vehicles
Notable Members
Related Ethnicities