As you pass by The Emerald Sail Pub you will hear the jovial songs of days long gone, back when the Glasbriste Oileán was a more welcoming place and the hills were waves of endless green. However those days never left The Emerald Sail as while you will be hard pressed to find any of the cities guards frequenting the pub, all are welcome to the inn with open arms as it was when The Emerald Sails was first opened.   The Emerald Sail Pub has been run by the O'Flannagan family since its opening and is currently run by Shaun O'Flannagan and his family.

Within his time as owner of the bar Shaun has acquired an array of colorful staff for the pub. Two amongst these are the bardic brother and sister duo who call their act "The Masons" as in their own words their music "Build good times within the hearts of others". The Eldest of the two is Joc O'Hana a Changeling pianist and singer who is said to be able to charm anyone he sets his sights on with his charisma and enchanting songs, this quite often gets him in trouble much to the annoyance of Shaun and his sister. Nim O'Hana was the younger of the two, despite being a changling she remains in the guise of a tall dark elven lady, playing sweet songs from her harpsicord and singing along with her brother as they filled the pub with song and dance. Despite being the more front and centre of the two she was very much the more reserved and quiet of the duo, however whether this is through shyness or something else is unknown to all except those closest to her.   The Chef of the pub is a dwarven man known as Rike Marin, a mountain dwarf who left his homeland far away in search of those who would appreciate culinary skills instead of skills in craft. Although tight lipped about his past, he has a loud mouth in the kitchen, but despite his temper has time and again shown he cares for those around him, even if he would not show so.   Helping out in the bar and kitchen are Shaun's family, His wife Sara who loves her husband so much she is willing to withstand Rikes temper in the kitchen, His daughter Shan and his Son Aidan, who both would carry food and drink out to the guests as long as they were not fighting each other.

The purpose of The Emerald Sail is to serve as a pub to all people within Chromaway, it seeks to serve great food with a great atmosphere. The Emerald Sail was originally built as a home for the original inhabitants of Oileán, the furbolgs. Hence the large doorways and windows which are still kept as part of the building even long after it has been taken into use by smaller races.

From the outside the large stone building casts a looming shadow over the people around it. The front of the building shows off its oaken windows and doorway that were fit for giants, and also displaying the buildings roots as furbolg housing. The inside of the inn contains one room towards the back of the building that is used as the kitchen, with smooth concrete flooring and it is much more well ventilated than the rest of the building. The main room is a large and open room with a bar towards the left side of the room in an area built for serving others, while to the right is a fireplace in an area much more suited to relaxing and revelling. Looking above you will notice that the ceiling reaches high and head space a plenty. Across from the kitchen is a small inlet that is heavily used as a storage area and space for extra tables and chairs.   Underneath the brickabrack within the inlet one could find an out of place, wooden cellar door that leads into a hidden basement of the building with four separate rooms, each hidden in their own ways so as not to arouse the suspicion of those who would be searching for one on the the run. These rooms would each have a pulley system installed so that those above could send food and drink down to those hiding below. And when those who were hiding in the basement were ready to depart, they would move an inconspicuous bookcase hiding a tunnel leading eastward towards the coast. 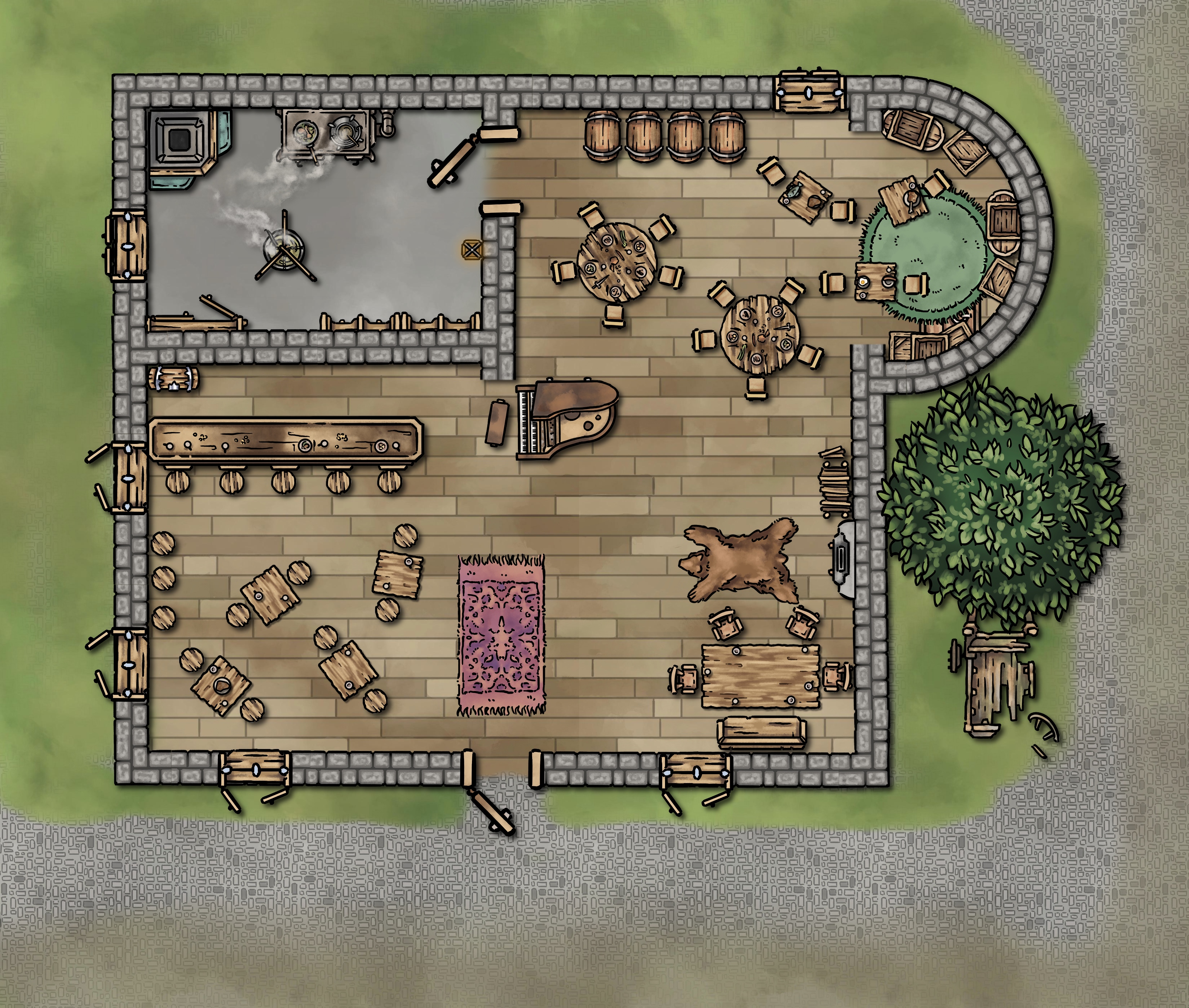 The building that would become The Emerald Sail was constructed in 3720 AGD by Furbolgs of Clan U'Nell, back in the founding days of the city of Chromaway when the Lobinians and Oilish traded in peace. The building was a family home for much of its life, however it somehow managed to survive the burning of Chromaway in 4286 AGD causing it to quickly become one the oldest homes in Chromaway. In 5120 AGD, during the early days of "The Opression" the Last U'Nell furbolg in Chromaway took in a poor homeless man called Aian O'Flannagan and gave him shelter. However when the old Furbolg was finally taken away by the Lobinian taskmasters, the home was left to the Aian, who after starting his own family and remodelling the building into The Emerald Sail Pub, would begin taking in furbolgs running from the cruelty of their Lobinian overlords and even try helping them escape. This would become a long standing O'Flannagan family tradition where over the course of centuries a hidden basement would be constructed and tunnel systems created with the express intent of harbouring runaways and getting them to safer lands.   In modern times the pub has been a pillar of the Chromaway community for many centuries, well loved for both its ale and its atmosphere. The pub has been run by Shaun O'Flannagan since 5734 AGD and despite being privy to many setbacks he has since kept up the family tradition with his incredibly welcoming and friendly demeanour not only in serving patrons at the bar but also helping those in need.
Founding Date
3720 AGD
Type
Pub / Tavern / Restaurant
Parent Location
Chromaway
Owner
Shaun O'Flannigan

Interesting history. I like that it became part of an underground railroad for furbolgs. You have some proof reading that could be done, but nothing that makes the article unreadable. The on that jumped out to me was when talking about the dwarf cook, it should be but instead of bust "kitchen, bust despite his temper"

Thank you for the feedback, hopefully spelling mistakes and a few grammatical eras have been fixed. ironically the result of drinking while writing about a pub.

This tavern has a very unique feel to it! I see that it might be inspired by an Irish pub, or atleast that is what comes first to mind from the surnames used in it! A solid read, and the map is pretty!

Thank you food the feedback. It is very much irish inspired and I am glad you like it.

Thank you food the feedback. It is very much irish inspired and I am glad you like it.

I highly appreciate the Irish theming with creatures like firbolgs being largely Celtic in nature along with the obvious naming and style nods. The part about helping runaways and such is great and would love it and maybe some other descriptions of the local parts of the city and what kind of runaways they help now. Could be developed into a few potential storys or questhooks, I could see a situation where the party are helping the guards find a fugitive who the pub are helping get out of the city and are faced with the options of exposing it and other innocents who need a way out or letting their target go. Some representation of the hidden areas or tunnels on the map would be cool, for now I'll assume a trap door under the rug in the corner. Nice article!

I love the map you have with this article, and how it was originally a home before converting into a tavern. Overall it is a decent article!

Seems like a nice comfy place to visit, and good entertainment too. And I love how it has multiple hidden rooms to help keep people safe when it was needed.