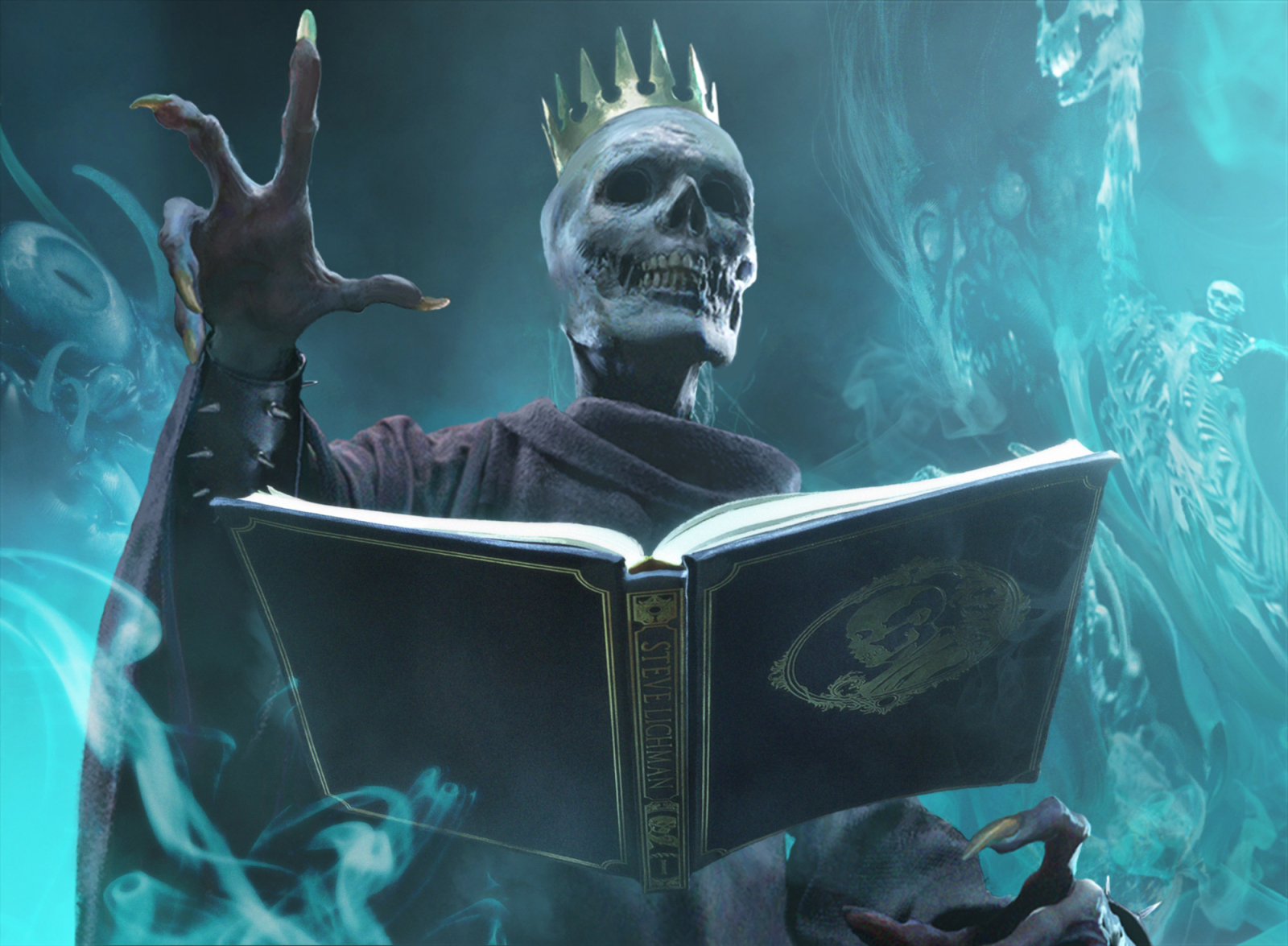 This tome was made for the private archive by the order of the Emperor, for his eyes only. This information was compiled by the cooperation of the Inquisition, Custodis Pansophical and the Arcanic Order, and is only for the eyes of the Emperor.
-Master Scribe, redacted

Liches, the most powerful undead creatures that exist in the material plane. Mortals, that have fallen prey to their fear and doubt, seeking any means necessary to escape death, can be steered in this path by dark forces, or their own lust for power. A lich's power comes from the massive amounts of magical power necessary to animate it, and any skills they may have had in life. Physical destruction is only a trivial concern to them, unless the magic that binds them is undone.

By most scholars' interpretations, a Lich is a creature that used to be mortal, but whose soul was changed by magic to empower it, and grant undeath. This releases the creature from concerns such as aging, and the need for food, air or sleep. The process creates a creature similar to any other type of undead, except that, instead of an empty body puppeted by magic, the original soul of the creature becomes part of the magic in some way. Because of the complexity of such a magical ritual, there are many types of Lich, seperated by the specific means of descending to lichdom.

Arcanely Animated. This type of lichdom is the most common within Tolhera, and simplest one to achieve, though by no means easy to achieve or defeat. The soul of those unfortunate enough to stray from the gods' light this far is trapped forever in a phylactery alongside a considerable amount of magic. The process to become such a creature is lost in burnt tomes of ancient evil, but if one were to speculate, it would require sacrificing all that makes a human themselves, as well as a large amount of magical power, and willpower to survive the violent procedure. The power binding such a lich is constantly fading, and as such they need to "feed" their phylactery with other souls at regular intervals, to maintain their immortality. To defeat such a lich one would need to first destroy its phylactery, ejecting the soul and power back to its physical body, and then destroy that, sending what remains of their soul screaming into the endless emptiness.   Elementally Animated. Similar to the Arcanely Animated lich, this type of lich blends their soul with power to achieve a state of undeath. However, instead of magical power, that is connected to the Weave, this type of lich uses elemental magic, commonly found within the Elemental Planes. This type of lich derives their power from the elemental magic within them, as well as their abilities in life, and needs a constant source of true elemental power, thus constraining them to the Elemental Planes forever, lest they rapidly lose their powers and un-life. Sometimes seen bound to the will of powerful Elemental Lords or powerful denizens of the Elemental Planes, they are rarely the masters of their domain, and often bound to serve creatures more in tune with the Elemental magic than they are.   Dracolich. In the final days of the Third Crusade, as the Dragons were being hunted down and driven from the Material Plane, some delved into ancient and evil rituals to expand their power. To that aim, a Dracolich has bound their soul in a phylactery alongside an extraordinary amount of magical power. These creatures were a far greater threat, as they possessed not only the power and ferocity of a Dragon, but also the magical prowess of a Lich, amplified by the power of the dragon's soul. However that was also their weakness, as their soul required large amounts of souls to feed and keep in their phylactery, they had to resort to ever more desperate attempts at slaughter to keep themselves alive. The last of the Dracoliches were hunted down during the Third Crusade, and their mysteries were lost to time.   Lich Lord. The Lich Lord is a purely theoretical possibility posed by a number of powerful archmages familiar with the mysteries of the Arcanely Animated Lich. It is thought, that maybe, if one were to amass a truly unprecedented level of magical power, they could completely blend their soul with magical power or other souls, and embed it back into their body. Such a creature would be theoretically immortal, and could regenerate even from its ashes, with the only possibility of its destruction being some mage or mages, powerful enough to dispel the magic binding the Lich Lord, before it retaliated, which is near-impossible. The reason why this form is thought to be impossible to achieve, is that it would require a truly god-like level of magical power, and amount of souls infused. If such a creature were to ever exist, it would pose an existential threat to the world, and its power could challenge the gods themselves.   Lich King. The Lich Kings of Ahridia are a form of Lich inspired by the Lich Lord, but nowhere near the level of power. These beings were once great rulers of Ahridia, in the time before the Calamity, and were entombed with their servants and treasures, and bound with dark magic, so that they would soon wake and walk the world eternally. While their forms resemble the Arcanely Animated liches, they have no need for a phylactery, as the ancient magics of the pyramid contain a number of souls, that are voluntarily being siphoned for power, to maintain the ancient King. Massive pyramids housing these creatures can be found in the southern tips of Tolhera, and have become ancient legends that are told around fires. Why the ancient Kings never awoke is a matter that none can answer, maybe the necromancers that bound them made a mistake, or their rituals were sabotaged by the servants of rival Kings. The only way to defeat this king of lich would be to delve into the pyramids that house their power, undo the spells and free the trapped souls that feed them, and then destroy the lich.
Image Credit: Dave Rapoza