PIE culture, short for Proto-Indo-European, originated thousands of years ago in the steppe country north of the Black Sea. Or, by an alternate theory, it all began in Anatolia. Either way, the PIEs spread far and wide, providing the common origin to Germanic, Baltic, Celtic, Slavic, Italic, Hellenic, Anatolian, Persian, and Hindu cultures and their respective mythologies.

The spread of culture over many centuries is related to the evolution of language groups. Both of these are affected by the migration of population groups, the separation of groups into isolated tribes, or the trade, conquests, and intermarriages that merge population groups together. By a variety of means, PIE culture spread westward into Europe, eastward into Persia and India, and southward into Anatolia and Greece, changing and evolving along the way. 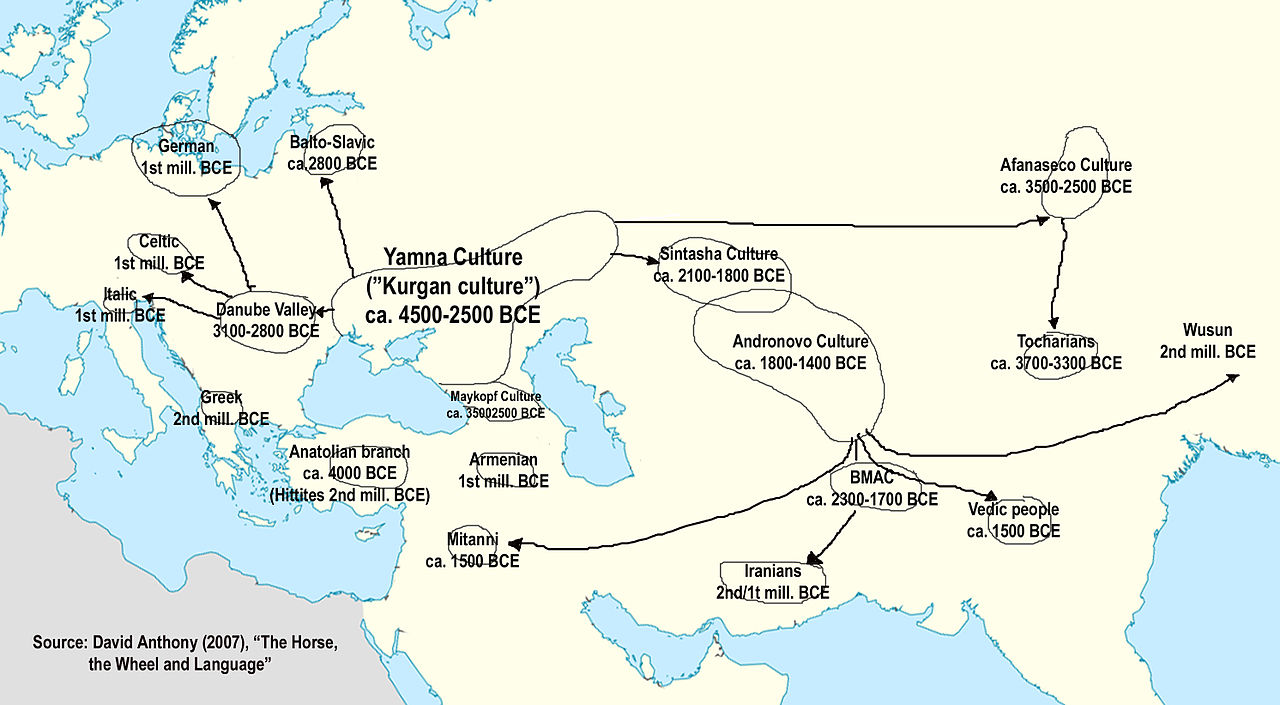 Proto-Indo-European People migration routes by Joshua Jonathan
Some PIE tribes lost contact with each other. Some disappeared entirely. Others traded ideas with surrounding peoples they encountered. Their languages and beliefs drifted and changed. Their stories changed. Tribal religions added new gods, emphasized different gods, or merged multiple gods into one. Tribal mythologies developed a fascinating variety of stories, including Norse, Greek, Celtic, and Roman, but if we dig deep enough, we can find echoes of those original PIE tales.

The P.I.E.-descended Mycenaeans arrived in Ancient Greece sometime before 1600 BCE. Their Late Bronze Age civilization was prevalent until 1100 BCE, centered around a network of palace-controlled states with rigid political and social hierarchies. After the catastrophic volcanic eruption on the island of Thera around 1600 BCE, the Mycenaeans wrested the Aegean islands from the fading Minoan civilization of Crete, and conquered Crete itself around 1450 BCE. The Greek pantheon, originating from P.I.E. roots, was heavily influenced by Anatolian and Near Eastern religions.   The most prominent Mycenaean city was Mycenae in the Argolid region, from which the civilization takes its name. Rival centers of power included: Pylos, Tiryns, and Midea in the Peloponnese; Orchomenos, Thebes, and Athens in Central Greece; and Iolcos in Thessaly. The Mycenaeans were in contact with other cultures and traded extensively across the Mediterranean.   The Mycenaeans used a form of writing called Linear B, which preserves the oldest surviving records of the early Greek language, including early references to some of the Olympian gods. Use of Linear B script ended around 1100 BCE with the Bronze Age Collapse, when cities burned, civilizations regressed, and literacy was lost in a so-called Greek Dark Age. When literacy developed again, it was with a Phoenician-derived script that evolved into the alphabets of Greek, Latin, and eventually English.   After centuries of relative Dark Ages, a new Archaic Greek civilization emerged. They had preserved the stories of Mycenaean culture in an oral form in a mythology whose stories were set in a romanticized Mycenaean past.

Greece and the Hellenized World

Greek mythology developed in the city-states of Classical Greece, first through centuries of oral tradition, then through the rhapsodes of Hesiod and Homer, and then through the playwrights of Athens.   In the 4th Century BCE, the conquests of Alexander of Macedon spread these tales outward into conquered lands. The empire broke into several Hellenized pieces after Alexander's death, preserving a dispersed Hellenistic culture.

A few to start with...   The Rhapsodes: Athenian Tragedians: Later Authors:

According to tradition, Aeneas and other Trojan War survivors made their way by sea to Italy. If so, they'd have met up with P.I.E.-descended Italic tribes who had migrated into the peninsula by 1000 BCE. The city of Rome was founded in 753 BCE. In the centuries that followed, the city's influence expanded into an empire that surrounded the Mediterranean basin.   The Roman pantheon, originating from P.I.E. People roots, was influenced by the Etruscans and evolved further as an expanding Rome became a multi-ethnic empire. A prominent cult of of the Egyptian goddess Isis took root, among other imported deities. But Greek mythology fascinated the Romans most of all. The Romans adopted Greek mythology whole, and mapped the Greek deities onto their pre-existing ones. Some Greek deities had no Roman counterpart. Some Roman deities had no Greek counterpart, such as Janus, the two-faced god of doorways. But since these two mythologies had a common origin among P.I.E. Peoples, they ended up meshing well together.

Due to the influence of Greek mythology, many Roman mythology stories are also set during the Mycenaean Civilization. Many core stories of the Greek mythological canon were expanded and developed by such writers as Ovid and Virgil, and by Greek-speaking authors living in territories throughout the Roman Empire.   Notable Latin sources include:   When the Roman Empire adopted Christianity, pagan rituals and belief was suppressed. Greek and Roman mythology no longer developed as religious doctrine, but continued to be transmitted as literature. 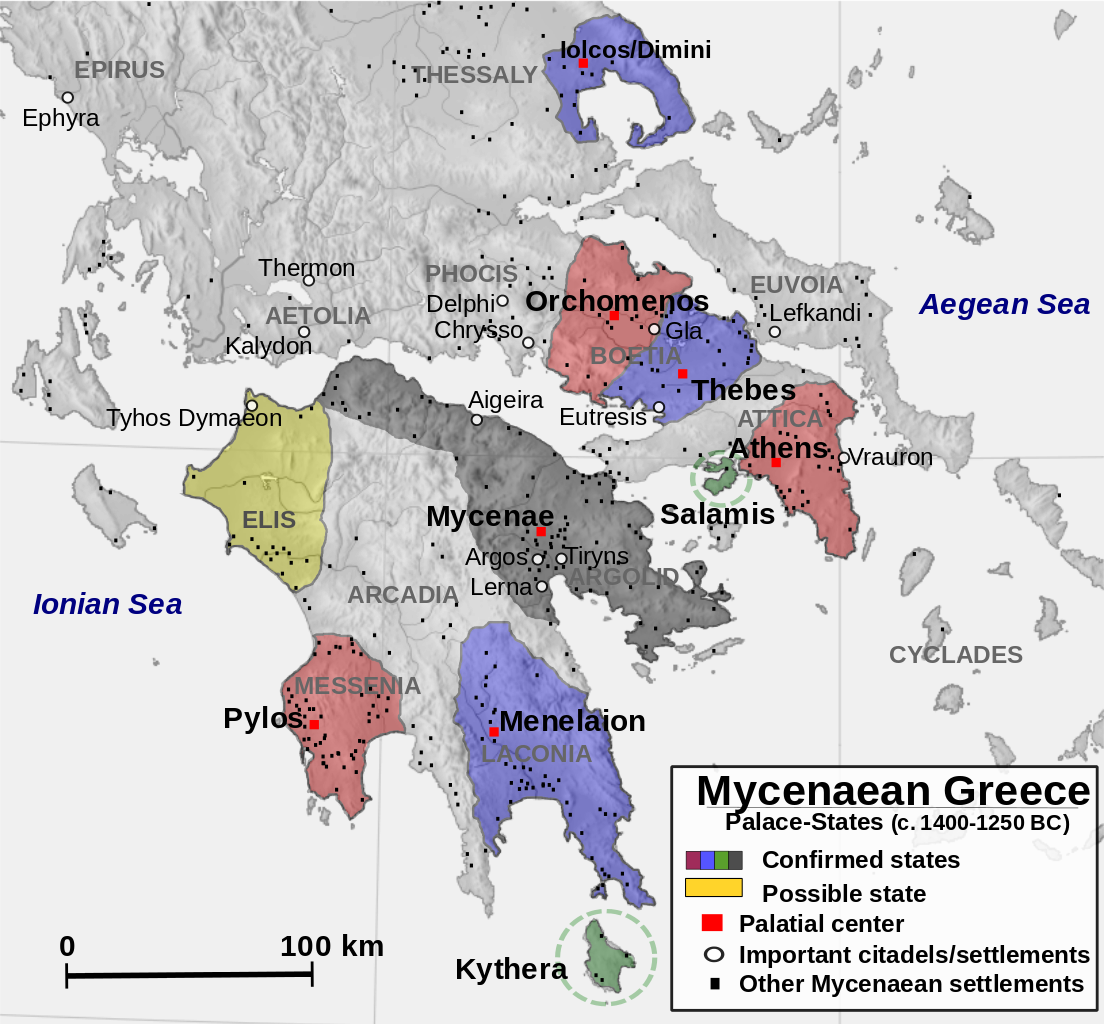 The Macedonian Empire of 323 BCE by Generic Mapping Tools 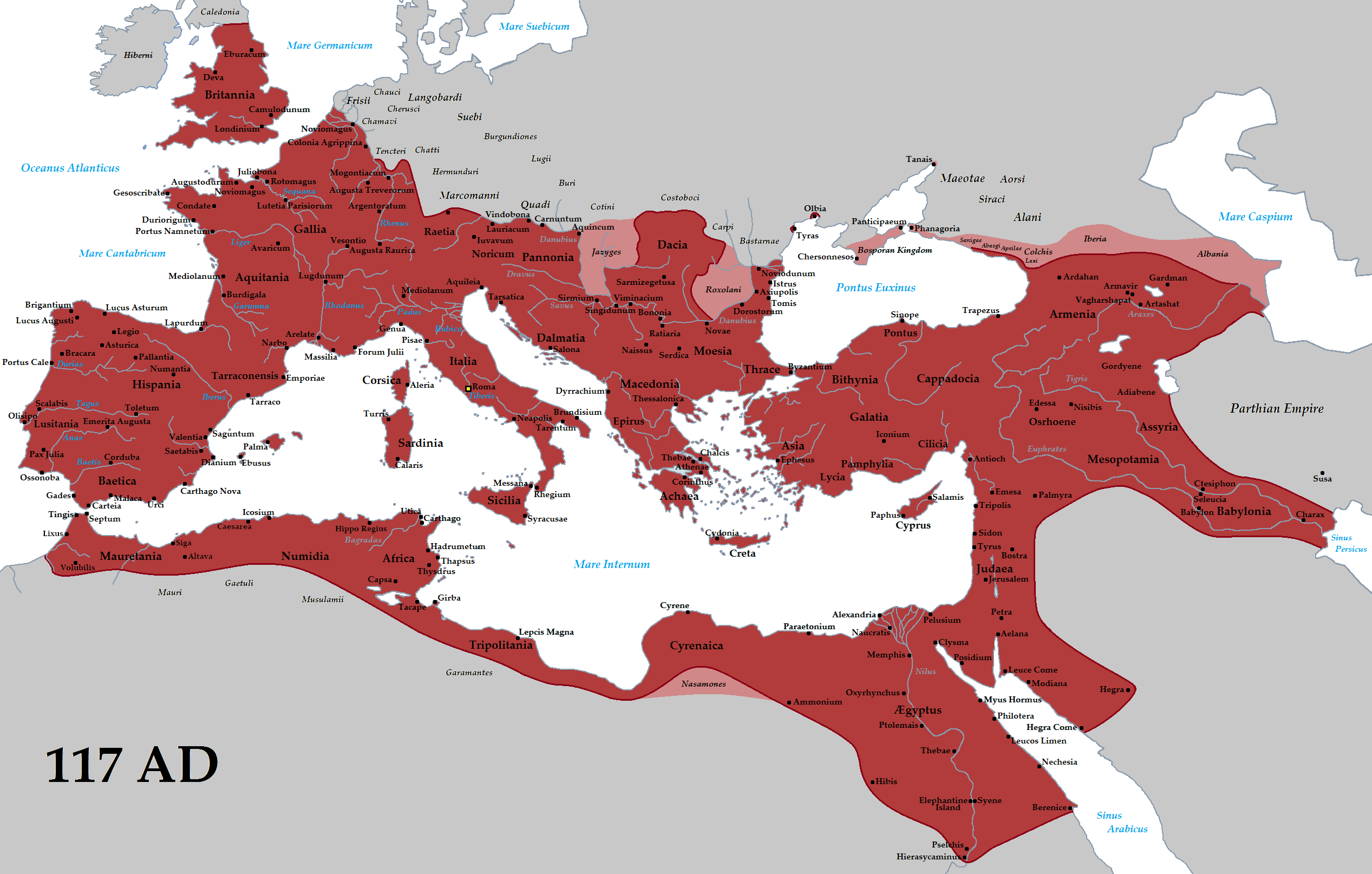 The Roman Empire in 117 AD by Wikimedia User Tataryn

The Fall of Troy:

And Then, An Amazon