Garrus is a strange plague doctor that acts kind of like a bird, is friends with birds, and mostly keeps to himself. He mutters under his breath a lot, and doesn't particularly see a problem with taking corpses home to test on. Furthermore, he wants to try and get rid of sickness, and he prefers to do so in his own way- making his own medications, and tending to patients in a way that does not reveal his identity. He likes to be swift with his treatment, like a shadow in the night. He will then sometimes stalk his patients from afar to see if his treatment worked. He believes that the illness that killed his family was supernatural, but still wants to try and find a scientific explanation for it.

Garrus was raised in a fairly wealthy mansion. His family members were struck by illnesses as he grew up though, and passed away, which lead to his acquisition of his current outfit. He is the last living member of his family.

Garrus is the doctor archetype. He spends his day to day life going around and helping those in need... but he also tests new serums and possible vaccines on willing townsfolk as well. He believes that he is helping the world by "curing" diseases.

Garrus was raised in Christianity but fell away, and now puts all of his faith into his work. He believes in the occult, and chooses to admire it from a distance, rather than getting up close.

His memento is a used syringe and needle encased within a small, black box. It was his mother's. It is the only thing he has left of hers, so he doesn't want to get rid of it. It also means a lot because he tried to use it to save his mother as well.

His advantage is that he is friends with crows and ravens. He can "understand" them, and they can understand him- aiding him in his every day life. He has been able to communicate with them since a young age, and it was part of why he never had any friends or partners growing up.

Doctor's bag with medical equipment (he keeps the memento in here), liquor, and a strong poison for... "self defense" purposes. Just in case.

Adolph helped Garrus get back on his feet when he was young, and helps supply him with materials he might need for his work. They sort of have a relationship like that between a grandpa and grandson.

They are simply friends who chat about theories involving the supernatural, and what happened to both of their loved ones. Garrus is not bothered by Bettie's demeanor, and Bettie is patient with Garrus.

Guy suspects that Garrus has been taking from the cemetery, and has to shoo him away. In turn, Garrus does not like him because of this, and tries to hide and sneak in when Guy isn't around. 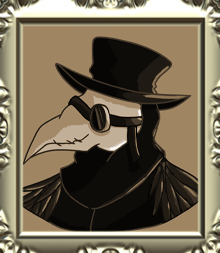