The Book of Truth

The dusty stone tablets had been hidden away in the dark room of the groundkeepers quarters for decades. The old stone had begun crumbling, one had even snapped over the middle when they moved them from their original placement all those years ago.

The Book of Truth is a text written down by the group who got the vision from Arkna and saw the reality she showed them as she taught them how to make shrines.

It was originally written down on large slates of stone placed at the the Shrine of Aralican, but it was sooner adapted into a book so it could be accessed easily. The document is more of a summary of what the vision showed, as only few actual words were revealed. The only information given was the name of the goddess, the name of the symbol Pra as well as how the shrines should be built.   The rest was shown and not told to the group in their collective vision. Therefore, the chapters in the book might sound more like stories to some of the Humans and Iwachi, though the Southern humans still generally believe in everything that is said in the book, as well as believe that Arkna is an actual Goddess and not a concept like some Munduanists might say. 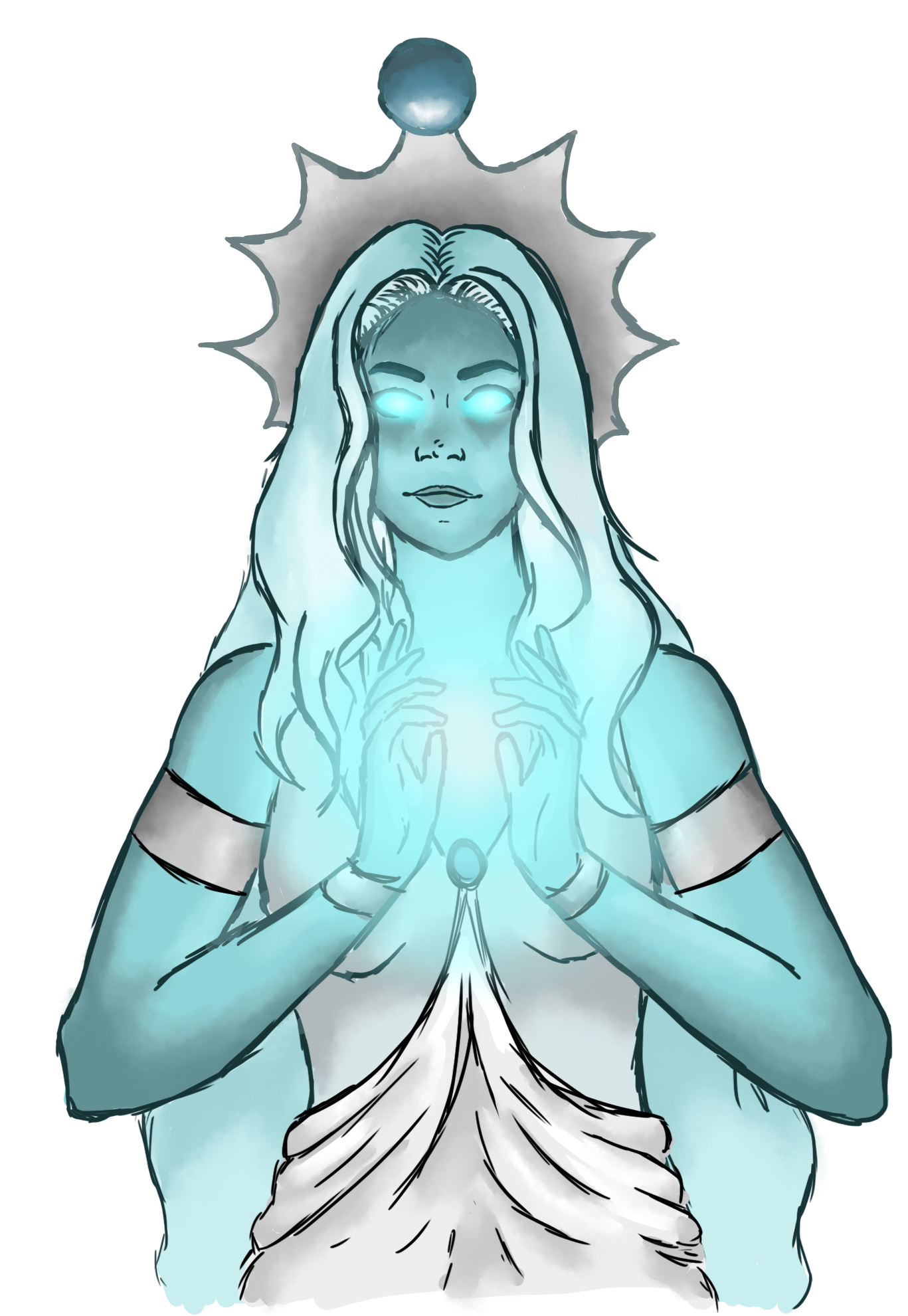 by Ninne124
The Goddess Arkna

The book is used both in Arknaism as well as in Munduanism, though only Arkanists interpret it in the original way. The Mundanists generally conform it to fit with their reality as it is now, and as most have begun to disbelieve that a goddess could be real, they believe that the earth itself is Arkna and that Arkna is a thing found in all things. The name Arkna is interchangeable with magic in Mundanism.   Now most believe in magic, though some have a harder time believing that there was magic. Arkna abandoned them 102 years ago and most magic users were gone 40 years ago. Some remember them but many have only heard the tales passed down. Variations of the traditions and rituals carried out at the shrines still live on, but they have no actual impact anymore.

The Book of Truth

The Creation of All

In the beginning, there was nought, only wast planes of echoes. Until two entities rose from the deep. The two battled and fought. Arkna was one of those entities the other was Kehll. Kehll created the darkness of the world. Arkna distinguishing the dark from the light by putting the sun in the sky. She created the day and then the night to counter it, so that there would be a balance. Kehll laid out the sea, to let the chaos reign over the work Arkna was mapping out. In turn she let land rise from the deep ocean. Mountains rose up with the earth with ice touched tips.   She placed a hand on the earth and from it grew the most wonderful trees and flowers. They spread all over the land she'd touched and she did the same to the others. Everything from the smallest green blade of grass to the biggest tree grew in the soil. She stepped back once again to inspect her marvellous and green creation, as she did, Kehll laid his own hand on the earth, creating blight and disease to terrorize the world further. Arkna saw, but she saw balance and so she let it stay. But something was still missing.   She drew in air and blew it out over the lands, the winds had been created and with them flew the most magnificent white birds. In turn, Kehll blew his own breath over the land and created a hurricane, which destroyed the life in its way. Again, Arkna saw but let it be. It was a balance. Without bad, there would be no way to see the good for what it was. Arkna blew another breath into her hands, creating horses, dogs, humans and Iwachi, she let them inhabit the world and she created an even wider variety of species. She infused them all with the energy of life and existence. As she stepped back the third time, she saw that her work had been completed and she drew back into the darkness and watched her work live on its own.   Kehll drew back too, but only to make Arkna believe that he was done creating chaos in the world. He slumbered for years and years until he saw his time come. A long time had passed by and bigger societies had been created, everyone seemed to thrive, even under the chaos that Kehll had tried to send upon the world Arkna had created. Arkna had slept for may years without waking, there was no conflict or catastrophe that demanded her attention. Kehll chose to change upon the world instead of adding new, as that might've stirred her slumber. He changed the nature of the energy within the world. It was no longer a resting power, but rather a power that wanted to break free and be used. This created chaos as especially sapient species somehow absorbed so much power they could do nothing with, and in turn, most would explode from the buildup. People died and took others with them into death. Even deep in her sleep, Arkna could feel the unrest of the world. She woke, but when she did it was already too late. Kehll had disappeared and she had no way of undoing his work without hurting the inhabitants of the world. He had bound his warped version of energy to the living vessels and removing it would kill them all. She pondered how to save her creation. The only way she could see fit, was to give them a way to open up so that there couldn't even be a build up. She created the The Shrine of Aralican. This now meant that humans and Iwachi could manipulate the power of the world to their wish, which was not intended when Arkna first created the world. She showed herself for the first time in a vision and taught them all to build shrines. After that she drew back once again and let her creation live their lifes.

To see the information in this chapter, got to Shrine building

Magic and manipulation of worldly power

To see the information in this chapter, go to Magic and Aventing

Land of the Goners

The souls of the many who left us do not disappear into the dark of the world when they leave their earthly bodies. Arkna showed us, that the souls float as energy, unable to pierce through the barrier between the layer of the world that consist of magic and into the land of the goners, where they spend the rest of their days in peace.   A shrine can be used to ensure the passing of the gone so that they get the energy they need to travel from one reality layer to another. This is called Transerion and should be done once a year to make sure that all who died pass safely.

To ensure that the energy of the dead pass safely to the land of the goners, the shrine is used. To see more about this go to Transerion

The ritual for unlocking the gateway in a person with magical potential. This should only be done once the individual reach a proper age where they have formed fully mentally.

Balance of the World

The vision showed us a world of light so blinding that no one could be seen, everything was scorched and dead or they were dying. Then Arkna showed us a world plunged in darkness, so dark so nothing could live. She showed us a world of both, where life was thriving but it all slowly faded away as she changed reality with her power. She didn't say anything, but we all understood, that one must not upset the balance, or the world would either go to light or to dark. One is nothing without the other.   Light can only be seen while darkness exists and darkness can only be seen while light exists.
DISCLAIMER: not everything from the document is actually written in the document above!

The book has contains the following chapters:

Excellent article as always. Somehow I forgot to press the like button during WorldEmber, but that minor error has been taken care of. I love that you have multiple interpretations of the book, it makes the religions seem more realistic. Also, the creation story was fantastic!   The tenets of Arkna did get my noggin joggin'.   "Do not kill innocents." - But what about war? Are soldiers not innocents or do people find ways of justifying war-related violence? "Do not meddle with the passage of time." - What does that even mean :O Have I missed or forgotten about a juicy article that explains this? "Do not act as if you are worth more than others." - How does this affect the thinking of leaders and intellectuals who are more useful to society than a random street urchin? Would a brilliant scholar who tries his best to follow the tenets sacrifice their own life to save less valuable members of society?   Keep up the great work! I always look forward to more of your articles :D

Thank you so much for the comment Dhel!   The rule on the innocent is not elaborated further in the book. Many have come to see civilians who have not hurt others as innocent and they don't believe that soldiers fall in that category as everyone knows that during a war, it is often soldiers who rampage.   The "do not meddle with time" is directed at powerful magic users, in case some crazy powerful dude decides he wants to travel to the future.   It does not affect most leaders as they tend to see themselves as Arkna's chosen ones to make sure everyone else is safe, but some follow this. This is often seen in the southern continent were the rules regarding how to treat royalty differs from what is expected in Edrea. Someone following the tenets down to every word would save anyone, whatever the cost :D