Rivers have a major effect on the regions they flow through, they can be seen to unite people culturally and or politically. When it comes to uniting people the Kirar River is a classic example, during ancient times it was the river that made the foundation for the nations that can be found along its banks today. In recent times it has been seen as a unifying symbol for the people of the Grand Duchy of Iceden , in its effort to hold back the hordes of soldiers from its neighbour to the west the Principality of Clifia .

The Kirar River begins as a small spring in the foothills of the Darbiens mountains, a low mountain chain running across the middle to the northern part of central Mirateia. During its first 130 km, the river drops drastically in elevation for thereafter only slowly decent until it's at the destination.

by cow2face
On its way down from the mountains, the river will make its way through the central plains of the continent and provide water for the farmers working the fields along the river having run one-third of its way towards the Kodin river, the Kirar River gets wide and deep enough for riverboats and barges to travel on the river and it's here the first trade posts are located and it's in the small town of Cio that the river finally gets wide and deep enough that the locals have constructed a bridge over the river.   Where the river merges with a small stream named Agos is where the grassland begins to give way to more densely forests.

One of the most important natural resources that the Kirar River provides is a major supply of fresh fish and other water creatures but along the banks of the river, it can provide the locals with the materials they use to make clothing and rooftops and other everyday things out of.

The Kirar River have a long history of fighting, it's currently what the defence of the Grand Duchy of Iceden  is based upon. The dutchy has forts and towers all along the river facing the Principality of Clifia. Throughout history, both the duchy and the principality have fought long and bloody wars as the principality sought to expand its borders in all directions and it was only with a series of bloody battles and some clever diplomatic manoeuvres that the dutchy managed to stop the principality at the Kirar River. 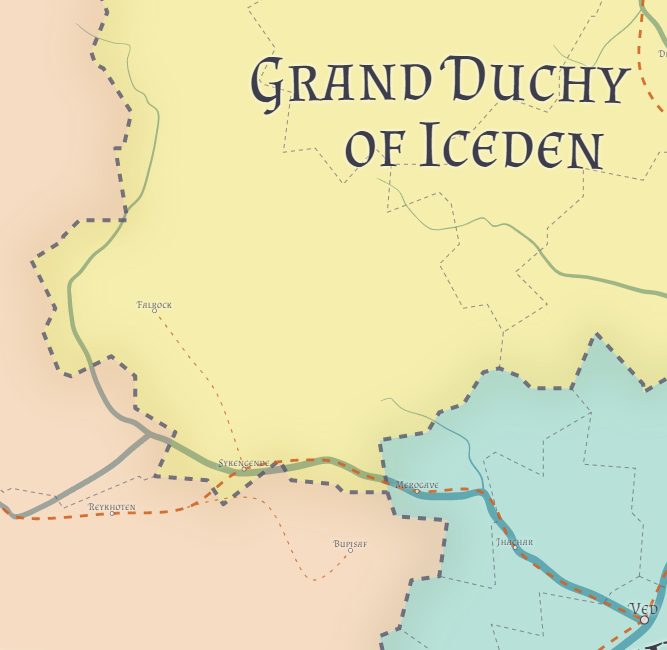 by cow2face
While being the utmost strategic feature in the area, it's also an important route for trade with its merger with the main river in the central continent, the Kodin river, it brings wares from the inland down to the capital of the Grand Duchy of Ved , Ved.

As a commercial artery in the central part of the continent, the river has throughout history played a large role in moving both people and goods up and downstream. During the last decades of the Ancient Empire, the river trade fell into decline because the workers that were needed to keep the river navigational were driven away and the river began to fill up with debris and sediments. In the period after when things had settled down again and people began to return to their homeland the river was slowly brought back into its previous state and soon after it again became one of the major commercial arteries in the central continent.
Alternative Name(s)
White River
Type
River
Owning Organization
Grand Duchy of Iceden
Contested By
Mainstream: Kodin   Basin: Kodin   Discharge: 499 m³/s   Length: 545 km   Width: average 500 m   Depth: 8-11 m   Mouth width: 1.04 km

Nice read. I am still a bit confused in regards of the map though. From the map it would seem like the river is the main form of defense for the Grand Duchy of Iceden and not Ved? It does not seem like Ved uses the river as a border or am I interpreting the map wrong?

You are right, its Iceden and not Ved xD Can see I was too quick when choosing the link the duchies xD Thanks for spotting it

I think including the data elements was a cool touch. It's also neat to see the focus on the impact it has regionally, and its importance politically and economically.   I would be interested to know if there are any species that are particularly important either as food or for maintaining the river's health.

All around a nice, short, but complete article. I like the inclusion of the elevation graph.