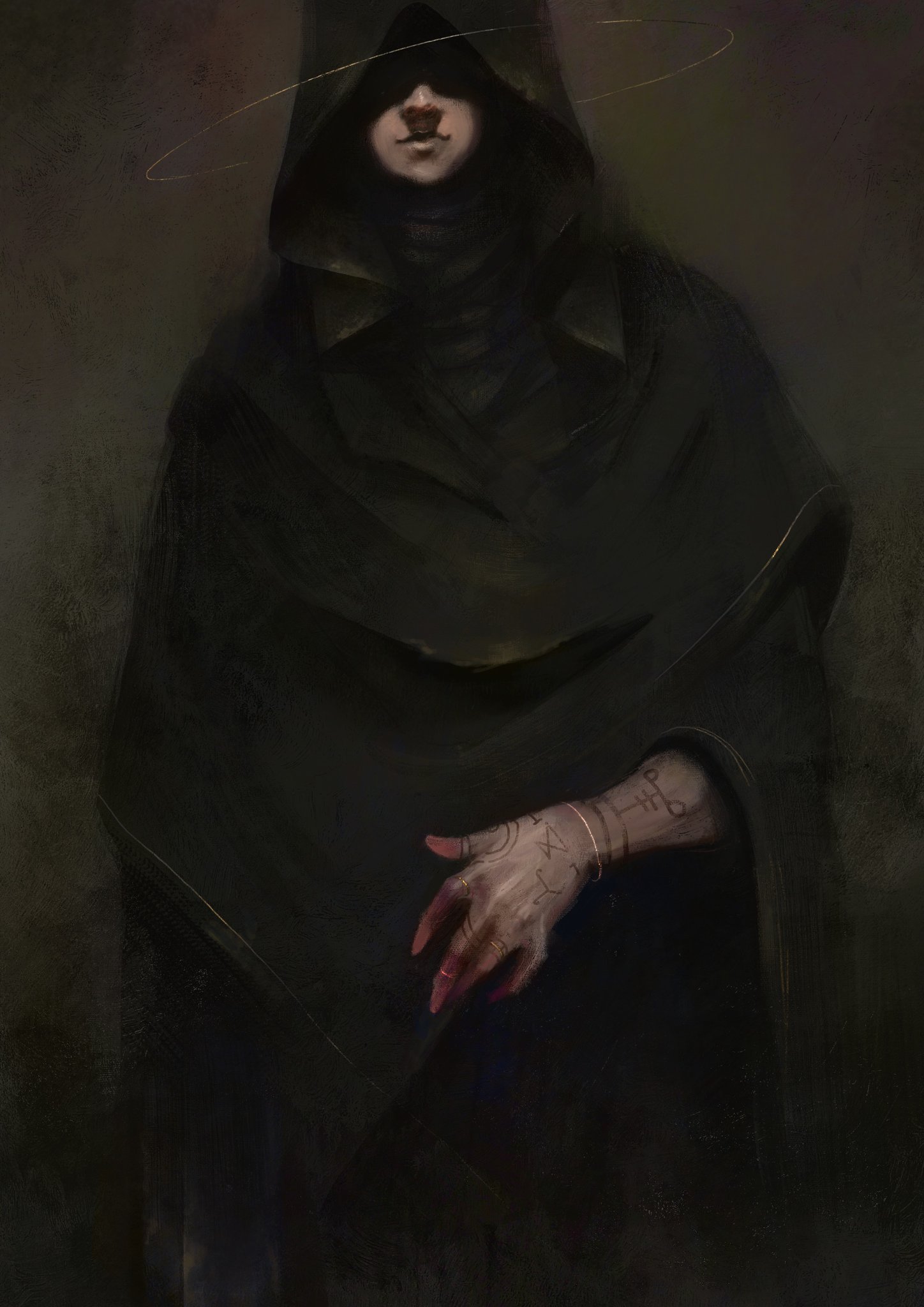 Traveler by BlackSalander | Caio Santos
A new arrival.
Around you is nothing but a pitch-black darkness. Or perhaps this is just what you are capable of comprehending within this vast sea of Nothingness. Whatever it is, it constantly tugs at your essence in an attempt to rip you apart, piece by tiny, incomprehensible piece.
You are not sure how long time passes; you are not even sure if time exists here in the darkness. Maybe it does not matter. What does matter, is your will.
At least, you think it is your will. It is strong, resilient, and focused. It keeps the darkness at bay and makes sure nothing but tiny embers of your essence escapes from you; perhaps once every thousand seconds an ember will dance about in the darkness before fizzling out. It is painful. So much so that it sends tremors throughout your form. You attempt to measure it in some more comprehensible way but find no words to describe it well enough.
Slowly, ever so slowly, you feel something changing. Where before you were floating in a seemingly vast sea of darkness, you now find yourself standing on something akin to a pitch-black plain that stretches on for eternity; the surface gives off a slight illumination that you can perceive with your whole being.
It is also smooth to the touch and covered in a thin layer of water. Or at least what feels like water. The surface itself could perhaps be some sort of stone or crystal. As you move forward, your bare feet do not feel wet when they are raised and no sound can be heard either.
You continue to move forward, directed by a sensation that nags you at the back of your neck. How long you have walked until you sense a difference in the landscape around you, you cannot know. It could have been only a few seconds, or it could have been millennia. What difference does it make.
What you first notice, is the change in temperature. Where before, you felt no cold nor warmth, you now feel both at different intervals. One step might cause you to feel like you are turning into an ice statue, while another feels like you are set aflame. The pain of this is only marginally though, nothing more than a faint nab on your skin in comparison to what you experienced when your essence was ripped off from you. This all continues for some time until you notice a second change. A wind. It brushes against you like a lover’s kiss and brings forth smells and sounds.
The smell of wet vegetation and dry air. The sound of birds and insects, along with animals and creatures that are set apart from nature itself. Incomprehensible voices that shout and whisper. Laughs and cries.
It only occurs for a short time, possibly no longer than a few seconds. But as it continues forward and leaves you behind, the darkness around you gives way to an outline of a barren, stony landscape that slowly solidifies into existence. Where the darkness disappeared to, you do not know, but you are glad to be away from it at least, and as you breathe in the fresh air, you look up into the sky. Not a single white cloud in sight, though you can faintly make out a few blinking stars in the blue. Strangely enough, though, you see no sun. Wherever the light is coming from, its source could as well be from the air itself or the ground you are standing upon.
As you turn around, you see several mirages come into being both far away and near you. Stones blurry out before taking on solidified forms of old ruins and broken down statues. Lush vegetation rises up against the sky and soon you realize that these are no mirages and that you stand in something akin to a valley surrounded by lush jungle in a vast stone desert, filled with ruins from a seemingly long-gone civilization.
You take a step back and give the landscape another sweeping look to see if anything else appears. Or maybe someone? But nothing. No sounds either, except for your own breathing and the movement of your own white robe in the dry wind.
As you turn around, you see something else in the distance. It is similar to a mirage in appearance, like everything else in this strange place. Something, possibly the same sensation as before, causes you to move towards it.
For every step you take, the mirage solidifies and it soon becomes apparent it is a gigantic wall that stretches across the horizon for as long as you can see. No. Not a wall, but a building complex made from coarse maroon-shaded marble. At the center of it, an imposing gate makes itself visible. It has no handle, only a heavy metal door-knocker, shaped to look like some kind of beast. The snarling mouth of this creature held a ring-shaped clapper. Reluctantly, you take hold of it and knock on the gate. A series of heavy, booming sounds echo throughout the landscape as you do so, and they are followed by a few seconds of near-deafening silence.
The silence ends as the gate opens up outwards and letting forth a wave of warm, golden light that prickles your skin. And standing in the opening as the golden light fades is a tall, shadowy silhouette dressed in a chestnut-brown hooded robe. Around the figures head, a thin, golden halo spins and pulsates slowly; the facial features themselves are hidden in shadow, except for a welcoming smile.

"Ah, a Visitor. Welcome to Old Reminiscence and to the Great Archive. I am the Archivist; a Servita of the Architect; the Creator Himself, of all there is. The Great Archive you see before you is of my domain. It serves but one purpose: To be a place where one may store everything that has ever been written, is currently being written and will be written, no matter their format. There is no other place in all of Alézun’Teran that holds as much concentrated knowledge as here. Again I welcome you. Please, step inside. I will take you to the Central Point Library; it will be easier for you to travel through the Archive from there.

The Archivist steps aside and makes an inviting gesture for you to go inside. You take one last look at Old Reminiscence before stepping inside. The warm, golden light is similar in sensation to that from an open fireplace one could find at an inn. It makes you relax and simultaneously fills you with vigor. Odd, but then this whole experience is odd. The Archivist makes a simple motion with his right hand towards the gates, which closes silently on their own, before he starts leading you forward along the broad corridor. It looks more like he floats over the floor than anything else, and his dark robe turns into snow-white mist where it meets the floor. He clasps his right hand and does not answer when you ask him anything or try to make small talk.
It does not take long before the hallway widens and opens up into a large circular room. It is bathed in a cool blue light, seemingly emanated by several small butterflies made from crystalline glass. They sit still on imposing blackened stone statues, idly flapping their wings. The statues themselves stand alongside the room's wall at regular intervals, with the chiseled appearance of knights in slightly jagged armor. Their armored hands are clasped around the hilt of a heavy stone sword, and while they appear to be nothing more than heavily detailed decoration, it feels like they stare into your very soul. Judging you silently.
You look towards the Architect, who allows a ringed finger to thoughtfully glide over the many books that are placed on the high shelves. You shake your head and look around the room, trying to take all in and not just focus on the small details. The shelves, which appear to reach up to the very ceiling so high above, are filled with tightly packed, leather-bound books of various sizes. The books themselves show no discernible titles on their spines, not until you move a bit closer towards one shelf, and you see the titles appearing with a burning glow, increasing in intensity and clarity as you move your hand closer. But before your fingers touch the smooth leather, you grow stiff and as still as the knight statues.
Slowly, you turn your head towards the Architect, who now stands at the room's center, behind an open tome that is floating above the floor. His stare — which is still hidden underneath the hood — makes you feel nauseated in a strange way. Perhaps you should not touch the books at the moment. So instead you take a look at the large tome the Architect is standing behind, and which you are certain wasn't there when you both entered the room. Its pages look to be as blank as a mirror's, and it's letters — strange looking as they are — glow softly with a silver-white color.
You force yourself to change focus, and it is instead put on the two imposing hall openings. They can be found on opposite sides of the room. One is oblique to the left of the Architect, and another is oblique to the right of him. Both have large names engraved above them: Miand'Més and Mésvéstell respectively, with the latter being more worn down than the first one, which looks more pristine.
Strangely enough, you see something akin to a mirage behind the Architect that takes on the form of a third gate, though it never really solidifies like everything else. Every time you focus on it, it all becomes unclear and seemingly out of focus, but if you look at it from the corner of your eyes, you are finally able to make out the name written above it: Saong Mearach. The gate itself looks both old and new at the same time. Worn out, but pristine in some strange way. It all gives you a headache and you stop putting so much focus on it.

"This is the place I call the Central Point in this Great Archive. From here, the distance to and from any of the Nexus Worlds are equal. Here, you can read written material that explains the fundamental physical and metaphysical laws that they all abide by. All of these laws were written by Architect, near the Dawn of Time.
If you want to return here, I can help you. This is an Astral Teleportation Clock in miniature format. I have given it a few special quirks, and it will allow you to visit any area of interest in this Great Archive, as well as allowing you to return here after you have gone back to where ever you came from. In those instances, you will appear here.

Tweet
Join Miand'Mésvéstell Chronicles Discord!
All rights reserved unless stated otherwise.
All images are the property of their respective owners.
Cover image: Sdj Desert by Juhupainting

So, it's an attempt at an interactive experience written entirely within WorldAnvil? That is really cool. Maybe mention a few clear choices about how the reader's path can diverge from here.

More like an in-world explanation for how one is able to get over all the books and other materials that makes up my articles. ^-^   I have thought about that, but for the moment it is not the plan. But it might change in the future. ^-^