You think you're so special just because you're a guardian? You, who don't even remember you replaced me?! You call yourself a Memory Guardian?!"

Illy Noire is the first daughter of Alyssa Noire, however, abandoned in the Felch Forest by Mia Rosenthall. Her memories were accidentally manipulated to think she was replaced by her younger sister; Eri Noire. Due to this, she grew up despising her birth mother and her sister. She holds grudge against them and vowed to make either of them suffer, especially her sister.   Illy grew up in the Scorching Valley, where a group of raiders raised her and taught to survive and kill. She had her first kill at the age of 10 and became a full fledged assassin under Etch Iden at the age of 18. Her style has been "Kill first, questions later". This causes her to develop poor social skills and identified quickly by the public. She dons a mask with tiger jaw on it as a way to hide her identity. She became selective mute and most of the time communicates through her eyes and tail.

Illy Noire is the daughter of Dianthus and Alyssa Noire. Prior to her birth, her father was killed and she was abandoned in Felch Forest by Mia Rosenthall. Her memories were manipulated and she grew up believed she was replaced by her younger sister, Eri Noire. She was found and raised by a group of raiders in Scorching Valley, an infamous trading path that risk merchants' life.   She was forced to survive at the age of 6 and killed her first person at 10. The kill was self defence, but it became an addiction and she adopted it into her life. She was taken by Etch Iden, a former assassin, and was forced into situations where she had to face creatures Erras. As a result of her harsh training, she lost her right arm and both legs which are then replaced with prosthetic.   She learned how to work with machinery and had forged her own dual katar gauntlets with one being attached to her right prosthetic arm. She attached various weapons to her prosthetic, solidifying herself as a living weapon and a ruthless assassin. By 18, she began accepting jobs from various clients and took the opportunity to find the whereabouts of her sister.

Illy suffers from abuse and stressful situations; trained harshly in the Valley by being thrown to the Erras to fend for herself. These abuses caused her to harbour intense grudge towards her sister, Eri, whom she constantly blames for the misfortune she faces during her childhood. She also seeks recognition and love, but ended up being forceful and abusive when it comes to earn them.   She suffers from abandonment, having forced various of people to stay with her and kills them when they refuse or attempt to escape. She yearns for love so much she became delusional, thinking people will stay if she just kill them and preserves their parts. She developed PTSD and was unable to offer nor receive love from others without drawing weapon to them.

"Kill first, questions later" has been Illy's principle from her life as a raider and assassin. She often refuse to listen to explanations and only wants a job to be done as quick as possible. She can be considered as chaotic neutral; willing to do anything as long as she gains information or compensation from her tasks.    However, she developed a rather twisted philosophy. She believed in inflicting pain and suffering towards others as she believed people are just good in doing so and does not deserve any kindness. She believes that if she inflict suffering first, no one would dare to hurt her back. Hence, she earned the title White Death for her ruthlessness.

Illy's first encounter with Eri involves torturing and killing her as an act of revenge for her abandonment, causing paralysis in the young guardian. It was only when Mia Rosenthall's appearance and the mystery of Illy's absence in Alyssa's memories that they discovered the truth.   There was an awkward, rocky start to their relationship, with Illy coming to terms with having a younger sister, while Eri attempted to have a conversation with her older sibling but constantly avoided. However, Illy soon grew fond of her and swore to protect her. 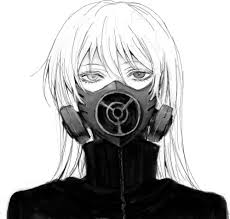 Ethnicity
Strigean
Date of Birth
34th of Zoduhs, Year 135 Era 5 (34.12.135 TDM)
Year of Birth
135 TDM 27 Years old
Circumstances of Birth
Planned, but she was then abandoned and manipulated to think she was replaced
Parents
Dianthus Noire
Alyssa Noire
Spouses
Siblings
Eri Noire (Younger Sister)
Children
Biological Sex
Female
Sexuality
Illy has no specific preference to whom she finds interesting. She sees men as "easy prey" while women as "delicious". She mainly sleeps with them when finding information or using the chance to murder them unsuspected. However, she leans more towards women since she finds men to be annoying and useless.
Gender Identity
Most people mistook her as male due to her height and muscular build. She prefers to go by gender neutral pronouns while working but she doesn't mind what pronouns she is addressed by the public.
Eyes
Blood red, but right eye has no iris and looked like cracked glass.
Hair
Shoulder length, tied in ponytail, white
Skin Tone/Pigmentation
Tanned with scars resembling tiger stripes
Height
5'10"
Weight
63.7kg

Remove these ads. Join the Worldbuilders Guild
The Noires