Work in progress
Looks can deceive, and Welda Briarrose is a prime example of this. What in first glance looks like your average halfling lady, ends up being quite a crafty and slightly terrifying Professor of Necromancy at Silver Shore Academy of Magi. Welda can feel a bit cold and aversive in the first few meetings, yet once you get used to her no-nonsense attitude and crude humor, she is... well, at least manageable.

In the game, Welda is necromancy teacher for player character Shade, who has become very successfull in her course. She helped Shade and Patch to gain further information about Patch's curse by performing a ritual to analyse it.

She is also known by May'chalithra Palefury, though only in very superficial level.

As far as halflings are considered, Welda is a tall woman, stading in as 94 cm (3 feet and 1 inch) tall and is slightly chubby.

Welda has ivory skin, with some visible redness. She was dark brown hair, steel-grey eyes, and proper posture. Her face is round, fingers rather short and back is long proportionally to her body.

Welda's magical talents are mostly in schools of Necromancy and Conjuration, but she also has a knack for Illusion and Enchantment in lesser extent. She also has a connection to disease and poison.

Welda also has some special spells of her own, like Welda’s Crippling Grasp and Welda’s Ruthless Plague.

Accessorising is the keyword when it comes to Welda Briarrose. Welda is known to carry around several amulets, holy symbols of deities of death and disease, and lucky charms in bracelets, earrings, and necklaces. Many of her jewelry is made of bone, and she tends to keep her hair on a topknot, that stays in place with hairpins made from some creature's fibula. She also enjoys wearing different types of beads and feathers, though mostly on her jewelry.

Rest of Welda's wardrobe is usually very plain and unremarkable, but functional.

The Briarrose family celebrated the birth of a baby girl on 21st of Jan, year 3964 AoS. Valster and Prusica Briarrose had hoped for a child for a good while, and the halfling couple was already getting rather old for having their firstborn.

Welda would end as the only child of her parents and was the center of their attention. She grew up in Sweet Ivywood, a small farming village, only hour travel away from the bigger city of Moon Terrace. Her parents grew livestock and farmed land with the rest of the village, her father being the local veterinarian.

Valster and Prusica wanted to make sure their daughter would have all she ever needed or wanted, as long as it was on their power. They made sure she was safe and happy, but also made sure she had enough wisdom to deal with tests and tribulations life would throw at her. They could get little overprotective from the little joy of their life but were mostly very supportive.

Young Welda Briarrose was a smart and quiet child, often lost in thought. She was far more careful in her actions than many of her age, but also helped her father a lot, spending time with sick and dying animals. Her father was expecting her to continue in his footsteps. However, at the age of 13, Welda took an interest in magic instead.

Sparking interest towards the arcane

The first sparks of curiosity in magic came to Welda after unfortunate sightings of ferocious griffins on the edge of the Sweet Ivywood in 3977. These beasts were hunting cattle and terrorizing the village, and call for guards and mercenaries were called from Moon Terrace to sort the problem.

This time, the call was answered by some adventurers with a wizard among them. The adventurers managed the take care of the griffin problem, but the wizard was injured. From his service to the village, the innkeeper offered them room and food for free until they recovered, so they wouldn't be in a rush to get back to the city, and so they stayed for a few days. During this short period, children of the village got particularly interested in the wizard, as wizards were rarely seen in Sweet Ivywood.

Young Welda, however, wasn't going to be satisfied with seeing a few simple tricks but wanted to find out how the magic worked. Her curiosity formed a never-ending flow of questions and a surprising realization. Welda was stunned to learn that wizardry was a skill that anyone with enough will and smarts to study could master, even a young halfling. As a girl of a small village, Welda had never considered such a thing even to be possible. Where other children were simply admiring the wizard's tricks, Welda would keep questioning every word and movement, prying for more information.

Meeting left young halfling with tons of questions and thirst for more knowledge. On weekend trips to the city of Moon Terrace she would sneak in to study to the Great Library of Moon Terrace. After a period of concern and confusion, Welda's parents would agree to find her a tutor, to see if the girl had gifts in the Arcane.

Welda's very first spell was Poison Spray, which she would use to prove her abilities, and start her studies in Silver Shore Academy of Magi in 3985.

Welda received some base education on reading and counting from the fellow villagers of Sweet Ivywood, and studied herself in the Great Library of Moon Terrace, and started her magic training trough friend-of-a-friend. She got into Silver Shore Academy of Magi in 3985.

Sharp wits and icy glare are some of the defining characteristics of Welda Briarrose. Her knowledge of necromancy, curses, and diseases is vast, and while not trying to be gross, conversations with her can take suddenly very morbid turns. She is very practical in her thinking, making her sound insensitive and even brutal, and shows very little intrest od social awareness around strangers.

What often takes people back with Welda is her attitude. She can be easily misread as malicious and provocative, though that is not (entirely) accurate.

In Welda's view, people are worth what they are capable off. Thus she has very little interest in speaking about things that do not present things that she finds useful. She isn't interested in what other people think or want, as long as it doesn't concern her. In Welda's point of view, words are just words, and actions are the only thing that matters. She doesn't see any use of hurting people for no reason, but she would instead spend her time alone with a good book than try to be pleasant to a person she has no connections to.

Welda is supportive and present to people who have won her over by being skillful, or nice to be around, preferably both. Welda appreciates intelligent and hard work, as well as devotion to one's craft. For her, they are the real measures of a person's worth and character.

Most people tend to be startled or put off by Welda's presence, and she doesn't seem to care more than it is necessary. She appears confident of herself and isn't the type to bend over backward to accommodate other people. That said, she doesn't look for trouble.

For people that have proven themselves to her, Welda in genuine and interested in their well being. Better not wait for hugs and cookies, though, but if you are doing good, you might land yourself with a compliment.

To add to Welda's chilling appearance, she is in the habit of collecting bones, having several full skeletons of multiple creatures in her collection, including most famously the two full Blink Dogs in her office. She also collects trinkets of death gods and necromantic symbols and has rather impressive garden of roses.

Nasal voice is one of Welda's most recognizable features. She sounds awfully dry and uninterested and can have a very sharp tongue. 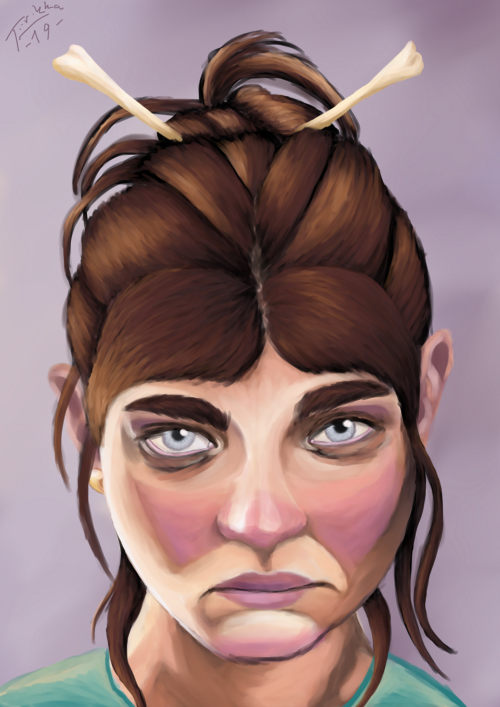 Reluctantly Shade straightened up his back, starring down to the small halfling woman. "My father used to be a great necromancer."

But the woman just stared him back with her steely eyes, looking unimpressed. "Well, that's good for him, but you are not him, aren't you?" Welda said, with a cold, uncaring voice that felt like a bucket full of ice shards. She measured him one more time and gave a sharp, annoyed huff. "Well, I guess you'll have to do."

— Retelling of a game scene
Looking For Answers, Session 8.