"They seem so high and mighty with their weapons, but we know better. Give them a moment and those great warriors will ask for the Mother's aid."

As the inventions of the humans of Vilender have pushed the damal orcs of Nukh Rotum further north, need to change has risen among the damal. And nothing exemplifies this better, than the rise of the current Miwhul Ronaht, Nilvi Bearclaw.

From the simple matron figure for the acolytes of the Oshezash Clan to an advisor for the Big Boss Grozak Bonecrusher, Nilvi has gone through an interesting journey, that shows the changing power structure of her society.

As a child, not much hope had put on Nilvi's survival. She was very tiny already as a child, and even as an adult she is abnormally short for an orc.

Nilvi is chubby like one expects from a clan leader's wife, on that she fits the beauty ideals given to her. Her Skin is olive-grey and dark, almost black-brown hair. Her orange eyes are like one of a wild cat or a snake.

Nilvi has been gifted with clerical powers from Luthic, and besides her divine magic, she has specialized to the visions through Ghostsight.

To match her role, Nilvi most often wears bear belts and other bear-related ornaments on her, as well as a lot of jewellery and fine fabrics, gifted to her by her husband and sons. She wears her nails long and paints them black, and never leaves far without her trusted staff and symbol of Luthic.

In 30th of Jul, 4017, Nilvi's birth was a relative disappointment, as her father had wished for a son to continue his legacy. As she grew, though, Nilvi started to show considerable wisdom and cunning, that began to appeal to the older women of the clan. She was soon taken to their care and take the role of an acolyte of Luthic.

Nilvi would prove to be a talented and cunning young woman, who mastered early the art of suggestion as well as the art of magic, considered a feminine field of pursuit among the orcs. Her talents won her favour amongst the elders, as she learned to cultivate them.

Her studies where almost interrupted at the age of 14, in the year 4031. Back then, she was promised and married to Grozak Bonecrusher, first son of the clan leader Zhak The Berserk. Grozak was just 12 at the time, just stepping the world of adulthood.

The position as the wife of a son of the chief caused some setbacks to Nilvi. Through common expectations, she was expected to give her husband sons and be invisible, so she would not end up stepping on the toes of her husband or mother-in-law Ghava. However, Nilvi proved both resourceful and observant and started to slowly manoeuvre to her husband's good graces, to gain more freedoms to study and build influence in the way that wouldn't provoke actions from others.

Life of the wife was proven difficult, as the young couple was first unable to get offspring. This made her a prime target for ridicule by her mother-in-law, Ghava whom herself had given the clan leader 4 children. Ghava was not impressed by Nilvi and would make sure that the younger woman would know that. She would mock her small stature, accusing it from Nilvi's inability to conceive, as well as criticising her commitment to all her marital duties.

Nilvi responded to Ghava's critiques with her wit and diplomatic skill and focused on otherwise keeping her relationship with her husband as good as possible, by tending his wounds from battles, making sure he had all he needed and slowly starting to strike a small conversation with him, even when unprompted. Grozak grew appreciative of his wife, and would frequently tell his mother off from Nilvi's neck.

Due to her good relationship with her husband, Nilvi managed to persist in her believes and determination, and as a young priestess, she took it upon herself to teach and train younger women and fresh acolytes. Unlike many ambitious orc women before her, she did not directly go against the patronal power of her society, but rather learned and educated the more subtle ways of influence. As a Luthic's humble servant, she saw her station as subservient, yet her natural lust for power made her observe several loopholes to use. She carefully selected words and trained her skills on divining through Ghostsight to impress, nudge and lead other around her.

In year 4037, Nilvi gave birth to her firstborn, her son Banzor. This made her status more solidified and raised her value in the eyes of Grozak and the clan. It also made her seen more favourably by the older priestesses, and she praised Luthic from the gift she had received. Through her accomplishments, the elders started to groom her among other promising ones to become the next Miwhul Ronaht.

As Nilvi grew her influence among the young acolytes and older women of the clan, the health of the clan leader Zhak The Berserk started to decline just a year after Banzor's birth, making schism between Nilvi's husband Grozak and her two brothers, Gunoll and Angar. As the brother's started to contest Grozak's power, Nilvi knew this could turn sourly to her, her son and her husband. To make sure she would have a future, she would carefully start to plot with her husband to make sure that his brothers would not overthrow him.

Competition between brothers was escalating, as each brother tried to prove their strength and guile to prove they were fit to be their father's successor. Nilvi used her position and influence to plot measures to hurt her husband's brothers in their competition and used her divinations and wisdom to aid her husband into a path of victory. By recruiting her student to her cause, she was able to expose Angar as plotting a murder of Grozak and decided to trick him to a trap. She offered her aid to Angar, making him believe she wanted to betray her husband and offer herself to Angar's wife once Grozak was dead. With her convincing act secured Angar's confession to her, and she presented it to the clan.

As the clan vote for Angar's execution, he would for last time raise his head to see Nilvi, and them Grozak, telling his last words:

"You may have won, brother, but this snake-woman of yours will seal your doom."

Despite his brother's warnings, Grozak continued with the executions, and to the shock of his clan, announced Nilvi as part of his advisors. Never had a woman stood among the clan leader's advisors. Such historical event prompted the priestesses promote Nilvi as the status of Miwhul Ronaht, as her cunning had truly proven her most exceptional of the daughters of Luthic.

Gunoll would submit himself to Grozak's rule, making Grozak the official new head of the clan.

Earning the added name of "Bearclaw", Nilvi has since grown her influence and even won the trust of her husband's men, though not all appreciate her magic, teachings and cunning. Those who heed Angar's warnings call her with names like "Snake-woman", "Forked-Tongue" and "Grey viper", deeming her untrustworthy and dangerous.

Nilvi would give birth to her second son, Drakk, in year 4040.

Wit and cunning are the most recognisable characteristics of Nilvi, with her patience, insight and dry sense of humour. She is very observant and knows how to play others around her, looking harmless on the outside while a storm is brewing within.

The word of Luthic has had deep impact on how Nilvi sees herself and others. She is fiercely loyal to her clan and ruthless to her enemies, staying subservient to her husband. Or, at least that is how her actions might be read.

While Nilvi doesn't admit it to any of the men around her, she has more than a few times shown that she might be looking down on them, viewing herself as the slice of sanity that keeps the clan going. It is hard to prove such accusations, but there are doubts if Nilvi's respect towards her husband equals her respect for Luthic.

Nilvi is the wife of Grozak Bonecrusher, and they have two sons together, Banzor the Slizer and Drakk Sabertooth. She is very close to her husband and protective of her two sons, who have grown to be powerful members of the clan.

As the Miwhul Ronaht, high priestess of Luthic, Nilvi has great loyalty and trust towards the Cave mother. While most known from her wit, her spirituality and loyalty to her goddess are also unwawering. 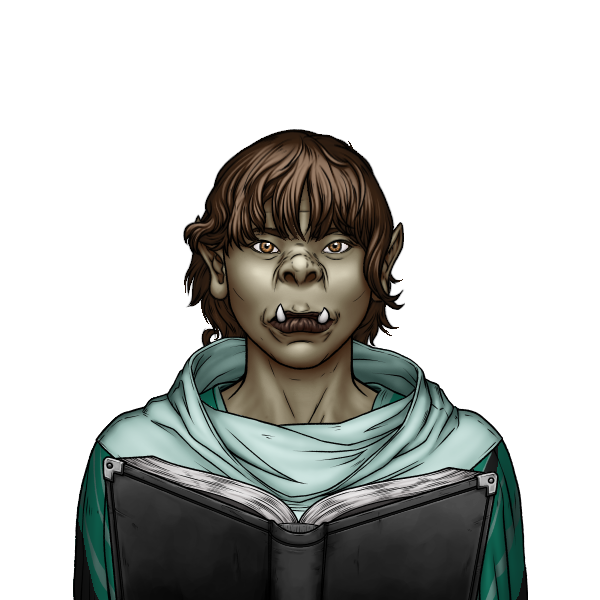 Answering: "Describe an important religious leader in your world. How has their character changed the status quo?"
Visit Tiirikka's Competition Page Check all other answers to this prompt Competition Homepage

I am intrigued about Nilvi, in particular: how did she go from finishing her priesthood studies to becoming the high priestess? Did she do something remarkable, or was it a long-term commitment, a "good record", and the support of others who took her there? (or something else)   Also, since the relationship section is shown: are her husband and her really that apathetic about each other?

Nilvi sounds like a really interesting person. I like the sound of her. Very intrigued by the designation of her relationship with her husband as 'honest' and 'frank' though. :D