"Oh yes, there is something like that in our jungles, yes. They like trees, they protect them. But they don't glitter, no. And they eat your tail if you hurt their land. Or swallow you in whole. That's how the Jungle Beast is.
— Cheeky Claw, tabaxi adventurer
while talking about fey

Among the tabaxi villages of Ashlarr, the story is told of a giant jaguar, spirit of jungles that comes to both to aid those in need and punish those who hurt its forest.

In stories of Jungle Beast, they are described as a massive cat-like creature, often similar to a black jaguar. Height of the beast changes from the size of a horse to size of a small elephant, depending on the telling. They seem to be able to move in total silence, only their presence making the jungle quiet in their steps, and have the ability to camouflage themselves to their surroundings.   They are described to live in the middle of Jungle and guarding something and getting very agitated if outsiders step to their lands. Beast is thought to be protector spirit of the jungles, and what they guard, is the heart of the jungle, where all the life comes. As such, tabaxi see the beast as a provider of food and luck.   Sometimes Jungle Beast gives prophetic dreams to shamans and gives tabaxis quests and rewards their bravery with gifts. But they also prey on those that they see dishonorable, misbehaving and too dumb or dull to their liking. As such, their story is often used to teach kids to behave in a manner that is more acceptable.

Because tabaxi live in tribal communities, they have very little written down history. This makes spotting the origin of the myth very difficult. While some believe the story was simply way for tabaxi to explain their environment. However, some believe that story might depict a real creature.   Possible real creature origins of Jungle Beast have considered being intelligent displacer beast or a sphinx with curious appearance. These both could explain the creature's position as guardian as well as the stories of riddles they give. 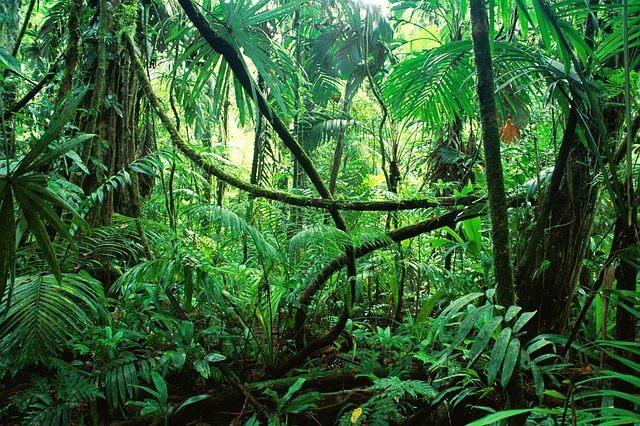 Jungle Of Chiapas by bere von awstburg
No proof of any of this creature exists however, so everything around its true nature is pure speculation.

Wood elves of the same area share similar stories of the beast in the Jungles, though they seem to be more described as a shapeshifter, and not exclusively feline. These stories agree on the creature being a guardian spirit on some sort and going too close to its territory, makes it challenge the trespasser.   In elven tales, Jungle Best is considered more vain and arrogant beast, yet still worthy of respect.

Story of the Jungle Beast is something that Tabaxi learn about when they are still cups, and it is the closest they have ever gotten to have their own distinct god or ancestral spirit. Tabaxi views themselves as an image of the beast, and as such, offer their service to it.   While not as prevalent people of Ashlarr are aware of the stories and show respect to it, especially nomadic wood elf druids that are in the area. They seem to share similar stories, making it possible that stories are based on real entity.

Tabaxi like to depict Jungle Beast in several forms in their art, usually how significance of given object. Beast is also respected in small shrines close to villages, depicting the Beast in different forms, usually in wooden statues.
Related Species
Related Locations

In the shadows of leaves and bush, the great Jungle Beast hides. Watching over the lands, massive is their form, yet they fit to hide under the shadow. No stick dares to snap under their steps as they hunt. Cloak as dark as night sky, yet like water, it takes the color of the leaves. Their eyes glow like two moons.   Be careful, little one, don't run away alone, Jungle Beast will find you and might not let you home. If you burn the wood not meant for fire; kill a beast without giving a share; approach the holy glade with wicked thoughts. Beast will find you, eat your tail and if you won't answer their riddle, they swallow you in whole.   But if you serve the tribe and respect the Beast of Jungle:
they bring you to spot with plenty
they help you gain your game
they watch over you in darkness
they keep snake-people away
and if your mind is pure enough and you hunt is fine and steady
they might share you some their treasures
and guide your way in the dark.   They are the spirit of Jungle,
one closest to our form,
their breath is our life,
their roar is our call.
— Old description of shaman's tale
common translation

Answering: "Describe the tales in your world designed to make naughty children behave."
Visit Tiirikka's Competition Page Check all other answers to this prompt Competition Homepage

Melyria is a custom roleplay setting made to work with Dungeons & Dragons 5th Edition by Tiirikka and friends.
Melyria draws is inspiration from several Dungeons & Dragons settings and their lore, mainly from Forgotten Realms.
Dungeons & Dragons belong to Wizards of the Coast and I claim no ownership of it.
Melyria and it's quirks belong to me and getting inspired is very much allowed and credits appreciated!
Article template
Myth
World
Melyria
Category
Myths and Legends in History & Legends
Author
Tiirikka
Publication Date
31 Jul, 2019
Creation Date
1 Jul, 2019
Last Update Date
30 Dec, 2020
Visibility
Public
Views
508
Favorites
2
Comments
0
Work In Progress
Tags
myth tabaxi mythology

This article was created as an entry for World Anvil's Summer Camp 2019 event. Sometimes it's easier to get things done when there is an event involved!   You can view all my entries to the event here, or check out Summer Camp 2019!