Once they called him "the Boy King," like the Vasandor Ralonsalor II from the legends. Mere 76-year-old Alathar stepped to power after the tragic death of his father and murder of his older brothers in the hands of the vile drow. As 27th monarch of Empire of Islenor, and 14th Thelirme to hold the throne, Alathar had big shoes to fill. But as his time is getting near, those shoes have gotten even bigger for whoever is going to wear them after him.

Alathar has lived a long and influential life, but he is getting weaker every day. His magic has kept him around so long, longer than it should have, and no one knows what is to happen to the Empire of Islenor once he continues on to the west.

Now as emperor Alathar has become old, his body has become frail and he suffers from memory shroud. Alathar won't live much longer anymore, but for now, he is still on his throne.

As handsome as Alathar was in his younger days, his abnormally old age has made him no favors. His skin has turned paper-thin and almost see-through, exposing his purple veins. His body has withered significantly, making him gaunt and bony. His long, elegant fingers have their skin uncomfortably tight.

Golden hair of Alathar has turned thin, and it reaches beyond his knees. His cheeks are hollow, and his bright blue eyes are foggy.

Despite his withered looks, Alathar is still a formidable mage, and arcane presence he oozes is crushing to anyone who can sense it. If upset, the old emperor starts to emit Icy breeze around him involuntarily.

Alathar is a very talented wizard and could have potentially become Archmage in his time, if not ended up to rule the Empire. He has unique talents in the School of Enchantment.

Alathar was born at the start of February in 3225, as 3rd son of emperor Farynis Thelirme. He was not meant to become the ruler, yet fate had other plans for him.

Early life
Alathar was described as a bright young man, who was adored by his mother, empress Darshee, who was most pleasantly surprised to be blessed with a third child. Despite being much younger than his older brothers Rennyn and Elydir, Alathar was often found spending time with them.   He went to train in military traditions as expected in his family, and he would be trained by his uncle Elnaril. However, as Alathar started to show particular talented in enchantments, Alathar was allowed to return home and begin his studies in Royal Academy of Knowledge of Tel'Taurn Tal and Cerulean Tower.   During his studies, Alathar would repeatedly do favors in the capital for his father and brothers as he was required to travel less than them. It was common knowledge Farynis wished Alathar to one day be his brother's advisor on matters of scholarly and arcane nature. His natural talent in magic made court whisper if Alathar would once take the position of the Archmage.   Alathar was charming, intelligent, and calmer and collected than his brothers. He has been even described to be a bit of a heartbreaker at his time, though he was mostly seen as well-meaning. In the year 3292, after first years of marriage, Alathar's older brother Rennyn became a father: however, his tiny daughter Ayla ended up as a victim of cruel epidemy that was moving in the area, and stay sickly and weak for her whole life. Ayla was a bright and sweet young princess, and Alathar would often spend time with his niece, reading to her and taking her out to see theater shows and carnivals when her strength would allow such. Alathar would keep up with his studies, but soon enough, the world would turn on its head.
Somber rise to power
Year 3302 would become the year of great tragedy for the Thelirme dynasty. In the spring months, an old battle wound of Farynis Thelirme would start acting up, and Farynis would drop from the back of his startled horse and break his skull. This sudden tragedy caused a lot of speculation, but one thing was clear: Emperor was dead, and Rennyn was to succeed him.   Rennyn was crowned as Emperor of Islenor, Rennyn the III, in 5th of May, 3302. As it was tradition, he would ready himself for a hunt on the western border, so he could soak his blade to the enemy's blood to prove his capability as protector of the realm. On this journey, he took Elydir to his side and left towards the West. But on the 12th of Sep, the drow had gotten the intel of the troops which Rennyn was leading, and on the cover of night, they came and butchered the new emperor, his brother, and most of their men.   As news reached the Tel'Taurn Tal Council was called to court, to decide on the heir. As Alathar hadn't turned 100 yet and as such wasn't considered an adult on elven standards, Farynis' younger brother, Elnaril, was also considered. Elnaril, however, did not wish to take the throne from young Alathar, and at the age of 76, Alathar was crowned as the emperor on 17th Nov, 3302. Elnaril would remain as one of his advisors, as would his mother.   Alathar's rule would start with great difficulty, but the young Emperor was doing his best to do his duties. There was a significant collapse on his mental well-being just 12 years after his crowning. After fighting off illness all her life, princess Ayla passed on in 3314, mere 22 years old. Alathar would collapse in deep depression and vanish to his chambers for weeks on end. His loss would eventually release him from its icy grasp, but it is said that Alathar was never the same again.
to be continued 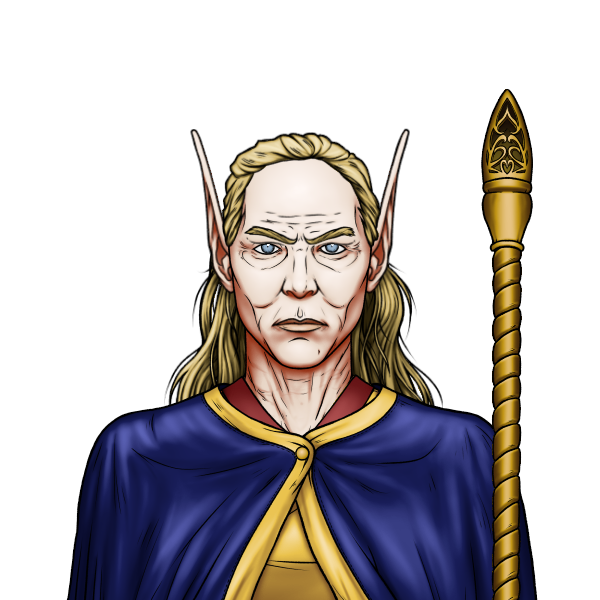 Melyria is a custom roleplay setting made to work with Dungeons & Dragons 5th Edition by Tiirikka and friends.
Melyria draws is inspiration from several Dungeons & Dragons settings and their lore, mainly from Forgotten Realms.
Dungeons & Dragons belong to Wizards of the Coast and I claim no ownership of it.
Melyria and it's quirks belong to me and getting inspired is very much allowed and credits appreciated!
Cover image: Crown On A Table by Church of the King
Character Portrait image: Alathar Thelirme
Article template
Character
World
Melyria
Category
High Elf NPCs in NPCs
Author
Tiirikka
Publication Date
9 Apr, 2020
Creation Date
11 May, 2019
Last Update Date
7 Nov, 2020
Visibility
Public
Views
250
Favorites
1
Comments
0
Work In Progress
Tags
emperor high-elf male npc thelirme islenor ruler