The great and ancient TurkisMittel River is often called the lifeline of the east. The longest river in the eastern Fae kingdoms (the Star Sign kingdoms of Night, StarRise, Day, and StarSet), it runs east to west, over 2920 miles before its waters dump into the Great TurkisBlau River. The river is used as the main transportation route, connecting the eastern kingdoms and the majority of their major cities to the more metropolitan west. Where everything else in the eastern kingdoms seems to be harsh, ruthless, and chaotic, the TurkisMittel River stands as a counterpoint of calm and stability and has long been thought of by the four eastern kingdoms as a sign that the stars shine the brightest on their people.

The river cuts right through the center of the grand 10 thousand acre Grunerde Valley in the Day Kingdom , the breadbasket of all of the Fae kingdoms. The Misted Mountains and Terracotta Desert lie to the north and the Elfenbein Salt Flats lie to the south. Here the TurkisMittel’s wide banks and calmly meandering waters make for great planting conditions. Grains, barley and rice are grown along the banks, and more hearty root vegetables, like yams and taro, are planted just on the edges of the flood plains. Through this valley, the TurkisMittel River floods very predictably twice a year making for the most perfect of planning conditions.   For the most part, the river as it runs through the Grunerde Valley is too wide for the standard method of bridge construction. It reaches it’s widest point of 1.6 miles wide on the long stretch of plains between Elfenbein and Grunlich. Traveling east, through both the Ascia and Neapel hills the river shrinks to around a fourth of that size before it travels into the mountains and is officially considered to be feed by its tributary sources.   The river is so rough and rocky in the mountain region of the kingdom of StarSet that all but the StarSet Royal Navy refuse to travel much past the trading city of Maren Ludo. And if it wasn’t for the prosperous hunting grounds of StarSet, the other kingdoms wouldn’t bother traveling that way up the river at all (the western kingdoms all but given up, preferring to deal with the Kingdoms of Autumn and Winter for their meats and furs).

There are three major tributaries of the TurkisMittel River. Its most easterly source lies in the kingdom of Night, located in the haunted Dead Obsidian Mountains and southern bordering Ancient Starlight Forrest. This is an area of many small waterfalls and the waters here seem to be especially fertile for fishing after the late summer breeding season.   To the north, located in the kingdom of StarRise, there are seemingly endless freshwater springs from the Bramblewood to feed into the TurkisMittel. Other kingdoms might see the Bramblewood as a swamp, but StarRise likes to think of it as the land of a thousand rivers. This is thought to be the main source of the river, although this fact is hotly disputed with the Kingdom of Night.   The smallest of the tributaries lies high in the mountains of the StarSet kingdom where the river carved the Tannengrau Pass out of the Sacred Mountain Range.   With all of these tributary areas and many miles of river, the official start of the river has never been found, or else never been officially recorded. That is still left for explorers to find.

The preferred method of travel in the eastern kingdoms is by river. It’s easier, cheaper, and faster to ferry up and down the river than it would be to transfer goods or travel by horseback. A trip from the Lilly Appa to Astra Moira, two cities on opposite ends of the river would take 115 days to walk, 30 days on horseback, or 5 days by ferry. The waters of the river in the Grunerde Valley are shallow and calm enough for push rafts to be the most practical solution from short trips or transport of good through the kingdom of Day. These types of rafts are also heavily used by the kingdom of StarRise for navigating the tight and rambling passageways that flow through the Bramblewood. The kingdoms of Night and StarSet prefer to rely on wood or coal powered flat bottomed ships as the rivers in their territories run upstream through hills and mountains.   If one does need to travel between Lilly Appa and Astra Moira the journey is generally done in two parts. Any experienced Day ferry worker will only take you as far as Moonbeam Castle before you have to get a Night ferry worker to take you the rest of the way. There is something off about the river as it runs through the Night Kingdom; the closer one gets to the capital of Astra Moira, nestled at the base of the highest mountain peak of the Dead Obsidian Mountains, a grey mist turns denser into fog until one almost can't see the city as they ferry into it.   It's also never smart, current political conditions as they are, when traveling in the eastern kingdoms to travel directly from the kingdoms of Night to StarRise, or vice versa. Instead, backtracking to the Day Kingdom is much safer and you'll be much less likely to wander into the harsh military patrols of the two feuding courts, even if it adds a day and a half to your journey.

The TurkisMittel River connect all of the eastern fae kingdoms, and once it flows into the Great TurkisBlaum, all of the western fae kingdoms as well. This once lead to a disaster that almost wiped out the fae completely. In 1066, the start of the human invasion, General Festis brought 1000 legions through the Tannengrau Pass, and using the TurkisMittel River as a instrument of war, conquered the whole of the eastern kingdoms before turning westward faster than anyone thought possible. The human armies were at last stopped at what is now the Stone and Ruins City by the Autumn and Winter kingdoms in a battle which is thought to be the bloodiest of recorded history.   The kingdom of StarSet has never gotten over the shame of this past invasion, and how they ‘let it happen’. The kingdom now puts all of its efforts into constant military patrols of its portion of the river, to the detriment of any other worthwhile contribution to the fae kingdoms. Not that there is much reason to travel to the Ice Palace, outside of diplomatic missions with the central capital, which seem to have mysteriously multiplied at an alarming rate for anyone that is paying attention.

One of the most controversial political issues in the east lies with the control and ownership of the TurkisMittel River. Both StarRise and Night see their own kingdoms as the true rules, as there is constant argument between the two over with region provides the most water to the river. Which ever kingdom control the river, should also get control of all the taxes and levies that might be potentially charged for use of the river. Each kingdom has taken to hiring (sometimes by coercion) the best scientist in all of the kingdoms to be constantly running soil sample tests and monitoring water output to try to pull ahead in the river control game, and eagle-eye observers will spot the pervasion of fraud and graft off all the officials involved.   Because this cannot be concretely proven, the King of Kingdoms, The Raven King, claims that the river, and the use of and right to tax it, is all his.   The kingdom of Day is not but a pawn in these plans, with their much weaker military and frankly history of spineless leaders, they are constantly giving in to its other two neighbors on the threat that the supply of water might be cut off or diverted. It is a good thing, The Raven King seems to have a soft spot for the Day Kingdom, at least for now.

The kingdom of Day holds the river the most sacred (sometimes, troublingly enough to the most devote Star Sign believers, even more than they do the stars). As a kingdom of mostly farmers and ferry workers, the life of a Day citizen revolves around this river. Prayers are said to the river morning and night, and most farming villages have their own shaman to constantly bless the water supply. Riverside temples and small shrines, built not to a river god but to the river itself, can be seen all over the banks in this region. When the twice annual flood comes and washes these shrines away, the local people rejoice and see it as the river taking tribute.   The other kingdoms, especially the ones in the west, are confused with all of these practices. Why do they pray to the river and not to a god? Why the constant rebuilding of shrines and the blessing of drinking water? And the most troubling, especially for the other eastern kingdoms, how can they not see that the stars are what is most sacred? The other kingdoms see Day as a bunch of heathens, and if it wasn’t for the cutting off of their food supply, this difference would have resulted in war long ago. 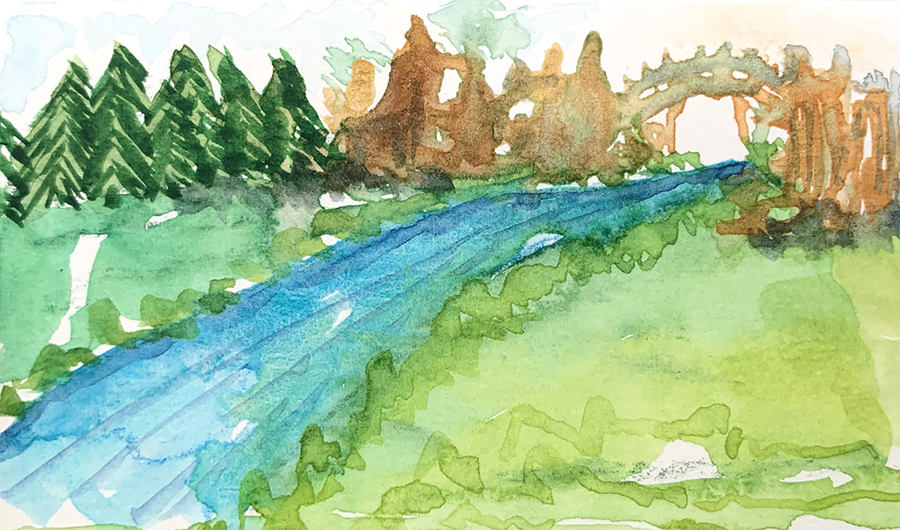 Sketch of the banks of the TurkisMittel River, just outside the gates of Moonbeam Castle.
Type
River
Location under
Kingdom of the Fae
Inhabiting Species

Nice article. I can understand why the kingdoms increased their military after what the humans did :p