WorldEmber 2022 | Powers of the World

An event where I will explore the magical nature of Malkora!

After missing last year's event, I'm simply burning up with determination to get writing again!

We are rapidly transitioning from "WorldEmber is Coming" to "Let's start WorldEmber prep!" So... it's pledge time! Here's what my thoughts are as we head into December! 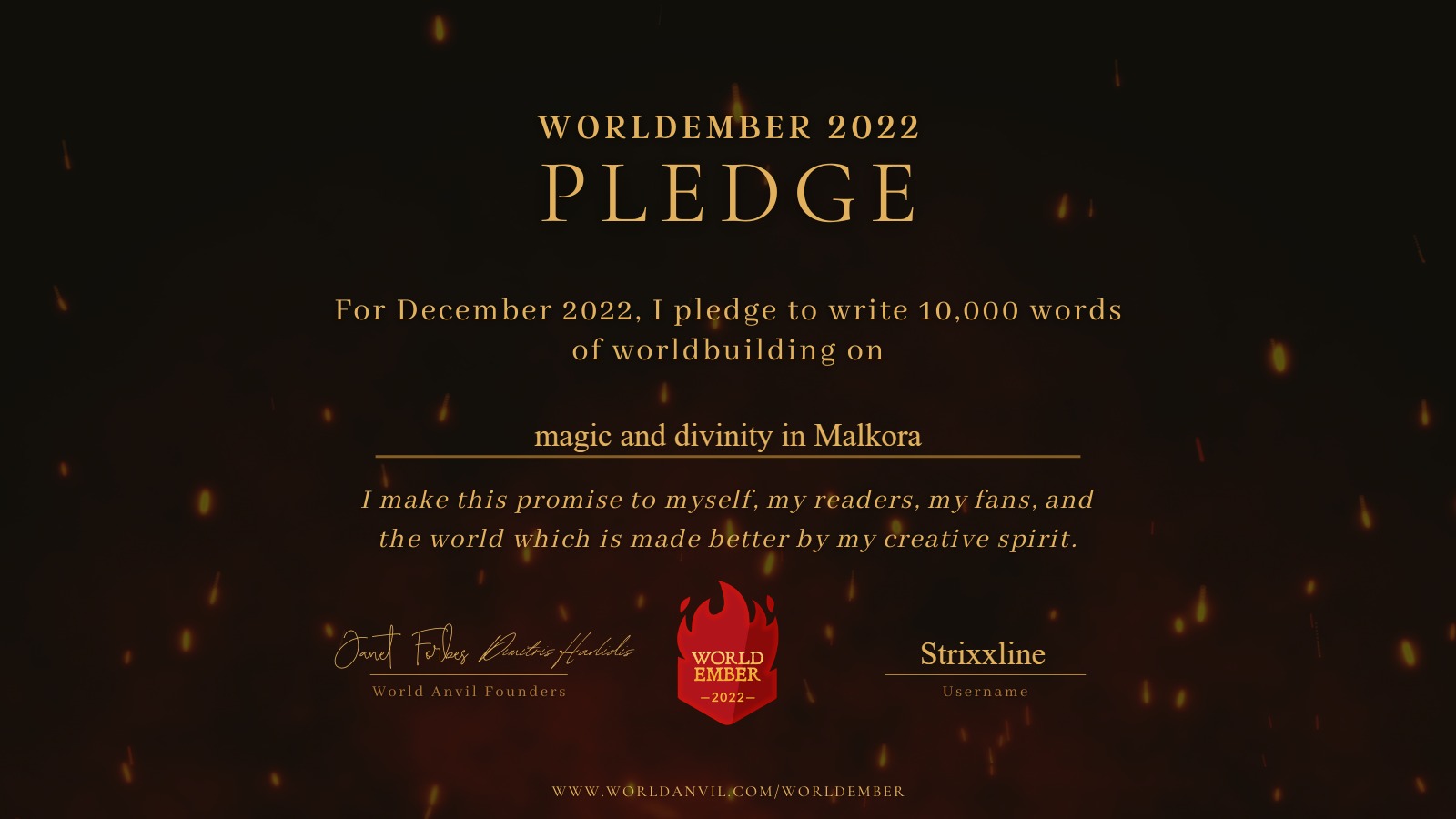 My pledge for WorldEmber 2022! I aim to write about the nature of magic and gods of Malkora, and how these different forces have spawned cultures of all kinds over time.
Curate your experience! 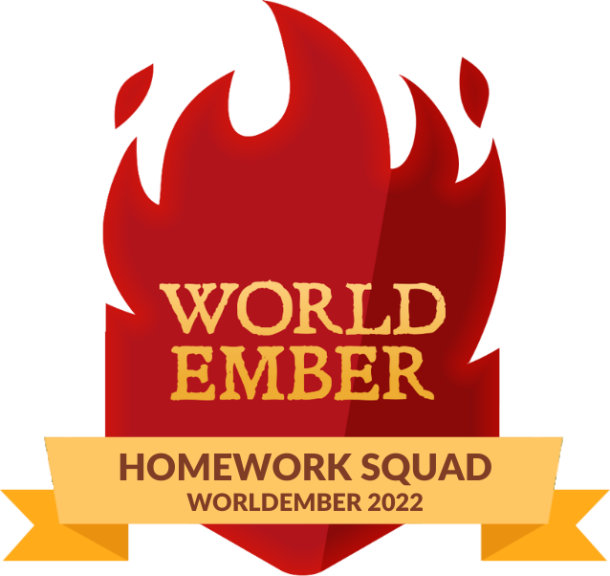 Powers of the World

Malkora is a world heavily influenced by several types of magic and numerous gods — from all manner of pantheons. The funny thing is, however, I have written very little about these things in all the years Malkora's been on WorldAnvil.   I'm thinking we might change that this year!   It's not like I've got spreadsheets full of potential deities and pantheons just laying around waiting to be written as lore...
My WorldEmber 2022 Pledge:   I pledge to keep my creative streak burning and bring to life ideas which have lived only inside of my brain (and in several Google Sheets) for years.   I will write as many words as my fervor and passion for my project will allow, and a couple more beyond that — just for good measure.

1. If you have more than one world setting, which one is the most important to you right now? Why?

2. Which area of that world setting will allow you to achieve your goals (Continuing your novel/campaign, or starting a new one?).

3. How will it help you achieve those goals?

I only have one world that I am working on, and that is Malkora! As far as more specific locations within that setting, I have a small chunk selected that I hope to focus on, with the goal of creating a "starter setting" for adventures staged in my world!   There's a section of my world that I already have in mind, in which everything began — the triad of regions in which I ran my first D&D game within Malkora, the section of my world in which the bulk of my early worldbuilding took place. A lot has changed around the world throughout the years that will affect how these places are designed and function, which means I have a lot of writing and re-writing to do!   It functioned beautifully as a starter setting in the past, and I'm simply eager to see how I can remake it now that I've developed so much more about my world and its history since I first brought the regions to life.

On the Subject of Metas

In preparation for WorldEmber, I have actually gone and filled in more information in Malkora's world meta! In the end, however, I'm not sure just how eager I am to take a deep dive into the main meta or mini-meta — they simply might not help me, with the state of my writing process as it is!   For now, I'll try to keep things brief with a short and sweet essence of mini-meta:

Now this is quite the task for me. I suppose I don't have too many articles to consider, currently, as far as categories and greater organization are concerned — but working on my categories has been high on my list for a long time.   For the time being, I'm settling on the following main categories:   Other categories I may consider include: Magic (Another main subject for Malkora — would include types of magic, sources, etc.), Bestiary (I love the idea of bestiaries and other similar resources, but I certainly do not have enough creatures at this time to make this one particularly fulfilling)

The good news here is... I've only recently updated my CSS! I don't presently have plans to update it, or to change my themes, but I'm ever on the lookout for elements which are out of place, despite all of my tinkering. I'll always find something, like a stray color in a bbcode element I never actually use and thus never thought to go and make style changes to (I'm looking at you, tables), then suddenly I find I need to go back and tweak my CSS so it looks right and the text sits right and — y'know what, I think you get the idea.     As far as other pretty things go, I've given myself a start with my Mapvember adventures, making maps featuring the regions I plan to focus on throughout WorldEmber! You could say I used the challenge as part of my prep!   I only came up with a region map for Terramarre (one of three planned regions for this month), so we'll see if I end up completing the other two in between my writing adventure! 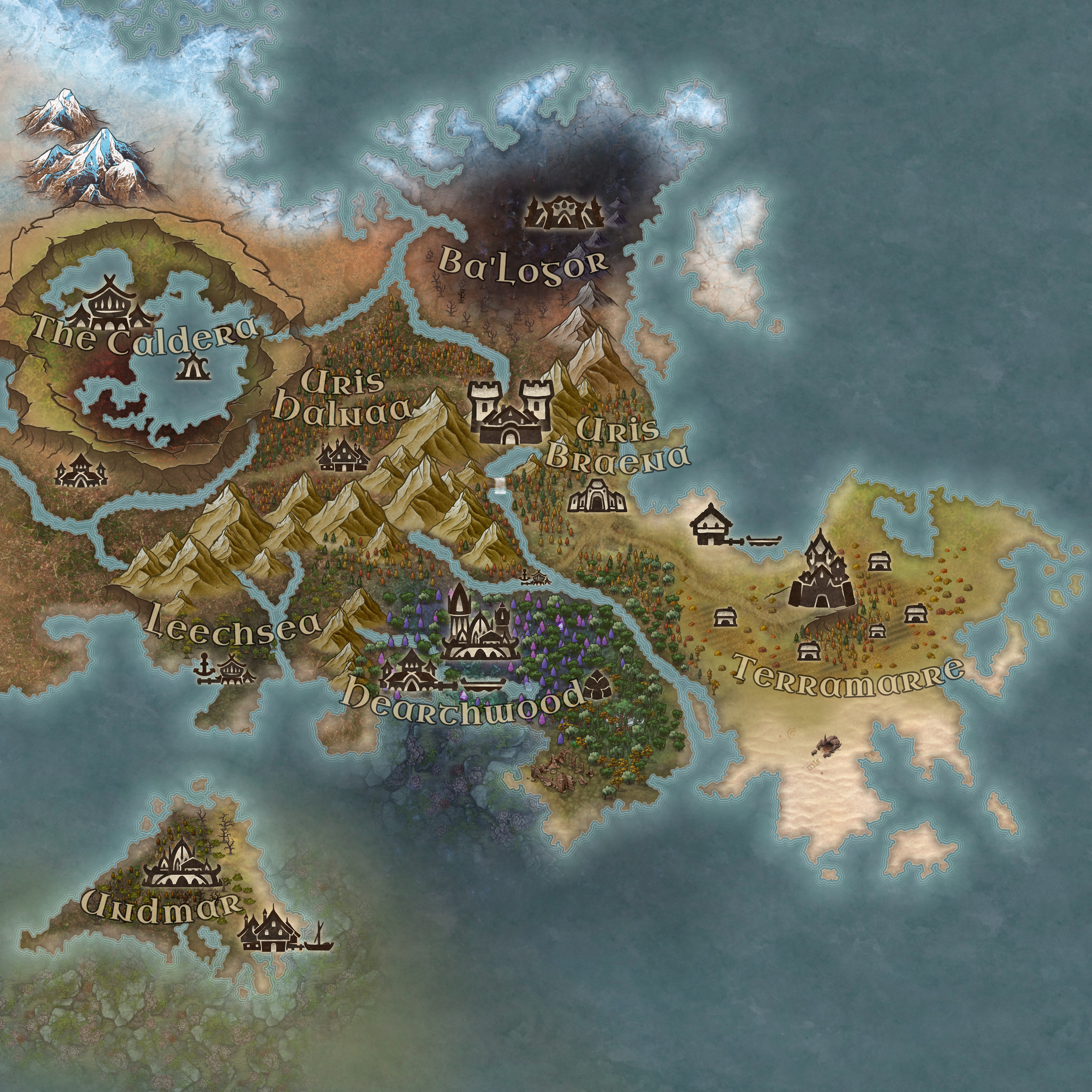 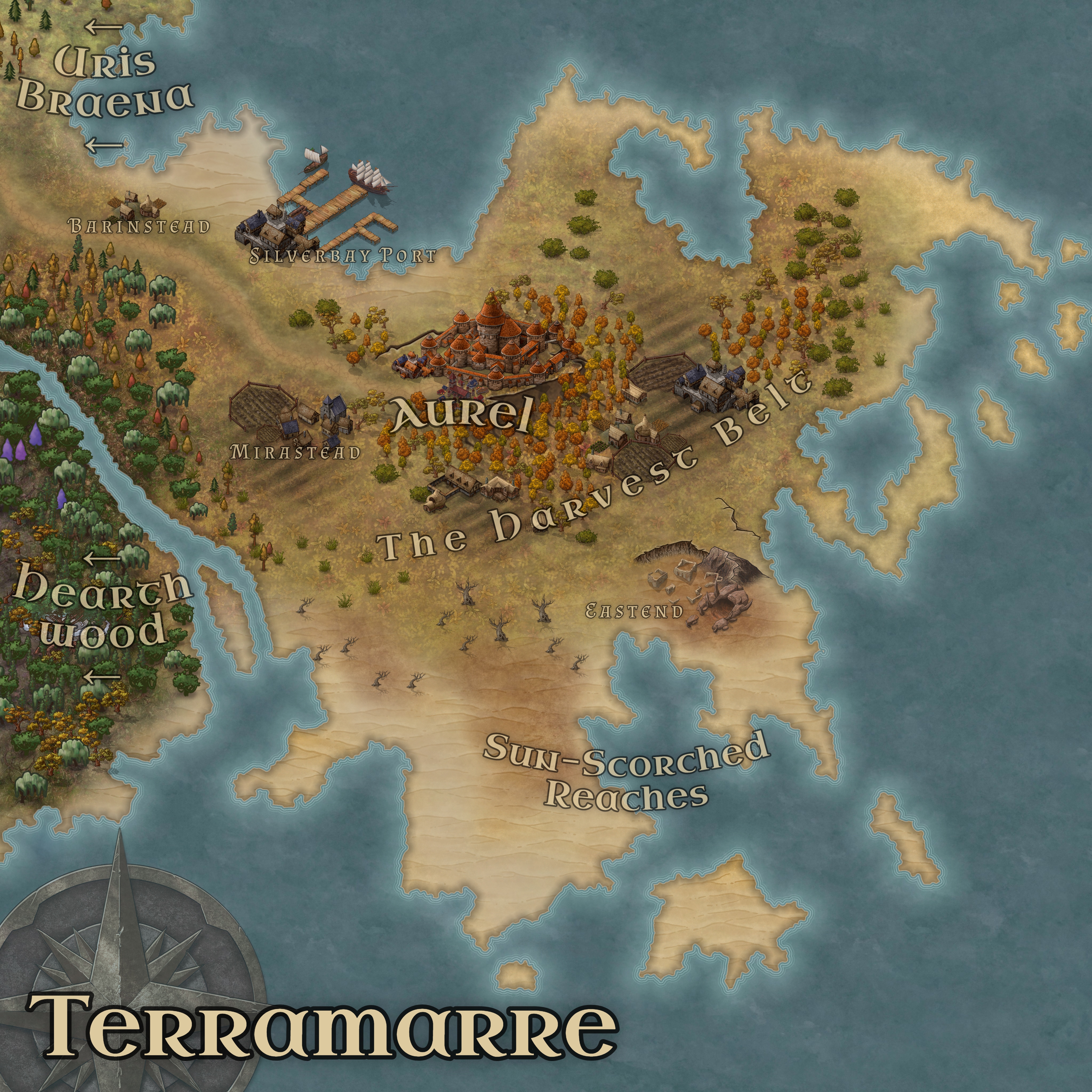 Map of Terramarre by Strixxline
Otherwise, I'll likely continue using resources like Midjourney to create images to go with my articles and ideas, and just really spice things up. Time is forever tight, so I can never promise that my own actual illustrations will grace my articles — yet. One day, I swear!   Dimitris don't yell at me, I promise I'll draw more for my world soon!

Good luck! I got a nice chuckle out of the line "It's not like I've got spreadsheets full of potential deities and pantheons just laying around waiting to be written as lore..." and now I can't wait to see what you pull off the spreadsheets and bring into WA!

Heh, I thought that might tickle someone! I've got lots of silly little things laying around my files that should end up becoming content eventually! So here's hoping WorldEmber can bring many of them to life in a beautiful way! :)

How's the wordcount going so far? :D I hope you've managed to get some good rest in, too

Hello! The writing's been dreadfully slow, I'm afraid! But that's how life is this time of year, huh? Still finding some time to be creative nonetheless, so I'm hoping the month won't be a total bust in the end :D