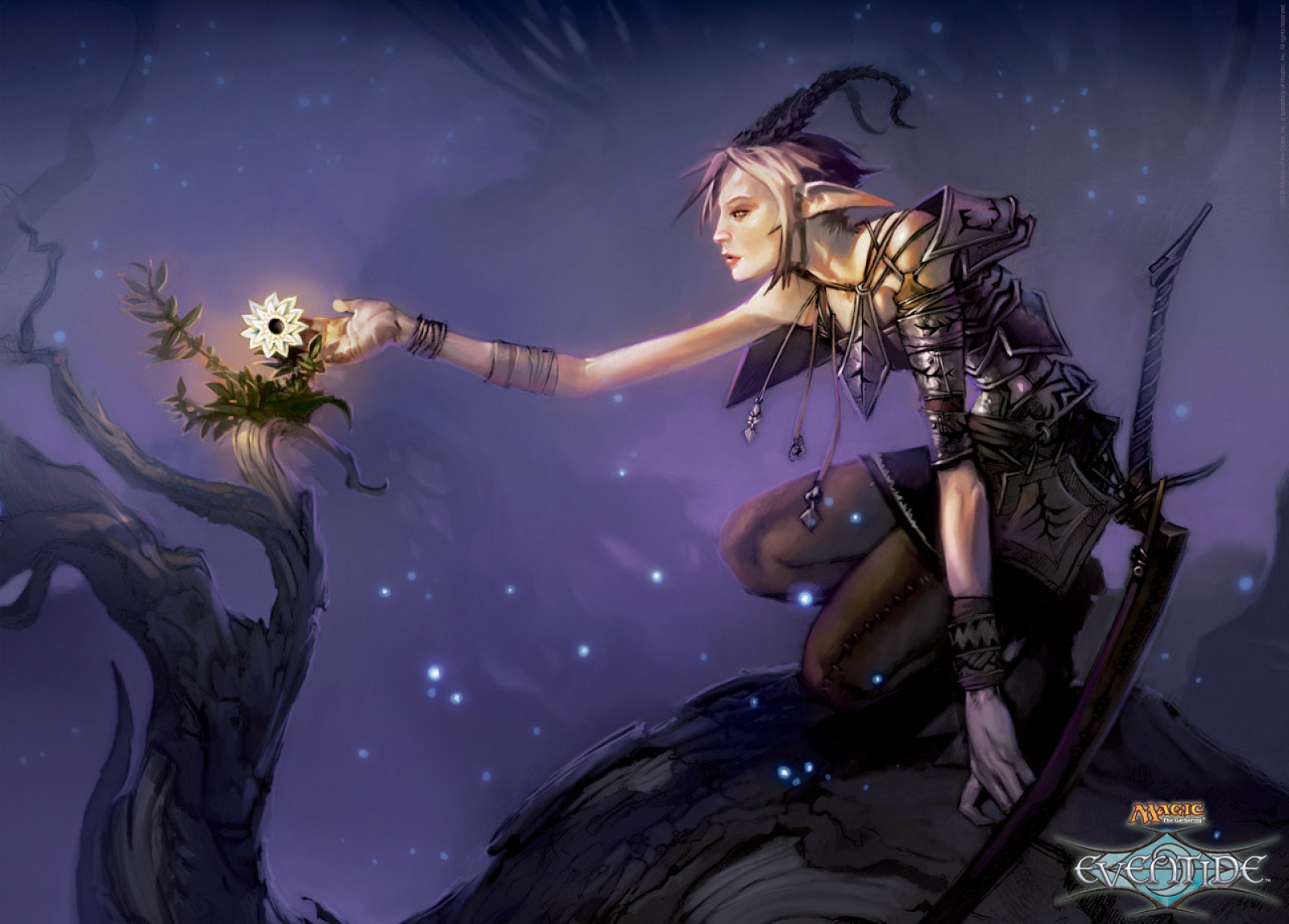 Sequestered in the forest of Larinia, most wood elves dwell in settlements throughout the vast woods, each village sually numbering less than two hundred souls. Their well-hidden villages are built among and blend into the trees, doing little harm to the forests themselves. Wood elves hunt game, gather food, and grow vegetables, and their skill and magic allow them to support themselves without the need for clearing and ploughing land. They are talented artisans, crafting finely worked clothes and art objects. Their contact with outsiders is usually limited, though a few elves make a good living by trading crafted items for metals (which they have no interest in mining). Whereas the high elves are regarded with contempt as individuals, but with awe and praise as a people and culture, the wood elves are in general more down to earth, and have a much closer connection to the other races. Wood elves are seen as serene guardians of the forests, and are known to be hospitable toward strangers. However, earning a wood elf's ire is also said to be among the worst things one can get.
Wood elves outside of Larinia act very independently; The wood elven tribe in the Halfling hills have integrated closely with their halfling friends, but the forest of Larinia oft keep to themselves, and have separate governing bodies for each village that barely interact with each other. The biggest, and least hidden of the wood elven cities, the Heart of the Woods, is located deep within the forest of Larinia, but in the middle of the Main Road's path, the Path itself going straight through the Heart. Here, there are many more people than just wood elves, and this town is known for its active curation of ancient culture and history. The Heart of the Forest, a giant, ancient tree of a long-lost kind, has grown hollow ways and ramps for the wood elves, acting as a proper building. It is their seat of governance.
Wood elves, contrary to high elves, look more alien. Like their cousins, they are taller and more slender than humans, but they have horns protruding from their heads, sometimes looking like animal horns and sometimes like tree branches. Their faces also look less fair, and more a bit malnutritioned, by human standards.

The wood elven dialect, compared to high elven, is strange, and harder to understand for others who are proficient in elvish (which is normally more akin to high elven elvish). It's not unlike how certain chinese dialects in the real world are almost unintelligible to those speaking mandarin chinese. Because of this, Capital Larinia educates both wood elvish and high elvish, so that the wood elves will have little problem speaking with others.

Many would see the wood elves as alien, not just by their malnutritioned-looking physique and horns, but also by their society. Contrary to many others, the wood elves all live as equals, having built their communities on trust, understanding and acceptance. Not only

The people of Larinia believe that one should only take what they need, and they never hunt excessively. They ensure that the prey the catch always has everything used, so that nothing they hunted goes to waste, as it would disrespect the animal.
Mutual trust is very important in the wood elven society. In some ways, the wood elves are not unlike their high elven cousins, and they share a love for courthouses. But whereas high elves use courts of law to enforce private or enterprisal gain, wood elves use it to divine truth, and bring about a trusting community. Often, cases in a wood elven court involve contracts and proceedures for handling deeds and inheritance, not only wood elven but also cases from other races.

Wood elves consider it courtesy to offer a drink, even when meeting a stranger. Therefore meeting halls in offices often have a drink bar or two, and bars and taverns are often a common place to set up a meeting between two individuals.
Also, when going out on vacation trips or longer job trips, like hunting or maybe a conference in another city, it's expected to bring gifts to those close to you.

Fashion is very twisted in this culture. Wood elves inherit specific pieces of clothing from their parents. It represents the protection of their ancestors, and for each piece that one can inherit from one ancestor, the better. They can be as small as a simple bead, or even a whole, finished piece of clothing. The wood elves call this the Ancestor Drape. More fancy Drapes are treated to magically preserve more perishable material, but the process is quite expensive.
Often, there is an animal to hunt (and cultivate), and a plant to grow and harvest, and then to incoprorate parts from those into their contritubtion to the Ancestor Drape. As a result, the Ancestor Drape is quite colorful.

Wood elves often breed animals to release into the wild, as they are acutely aware of the nonelven hunters that hunt in their forests. They know that this too, is at least a semi-natural part of life, but they wish to ensure that the animals of the forest do not die out, and therefore breeding is not unusual. As a consequence of this, pets are quite common to wood elves, especially smaller aviary ones, or ones that more easily moves through the highly dense forest.

Wood elves see the forest as beautiful, and consider the natural way of life a kind of metaphorical beauty. Decorations in elven houses are often branches called out from the wood in the trees.
Wood elves often like to see clothes made using animal parts, especially bones, as it indicates respect towards the animal in having used as much as possible of the animal.
In the end, elves often don't see the material beauty as something they care extremely for, but there are of course exceptions. Overall, wood elves look for those whose personality they find "beautiful", often completely disregarding looks.

In nature, all are equal. This is what the wood elves believe, and it reflects clearly in their ideals of society, and to that extent their gender views. They disregard race, social standing and gender completely. What matters to a wood elf is how they are as a person, and if both are compatible, then the wood elf firmly believes it will work out.

A relationship is a big deal in a wood elf society. Finding a life partner for romantical reasons is something that often becomes a lifelong search for some. But the wood elves also have some of the high elves' logic, and recognize that it takes a while for someone to find who they love, and that they won't know unless they try. Wood elves quite often go on dates, arrange casual get-togethers to get to know each other more properly, and if things go the way for two (or more) individuals, they try a relationship together.

Wood elves look for a long-time partner, almost unfailingly. They see love as the ultimate pinnacle of two personalities mixing well together, and few elves only go for one-night stands. They also recognize the difficulty of finding nonelven partners, not necessarily because they're a bad match, but rather because the elves unfailingly outlive the other races.

Larinia forest is governed by the Meet of the Many, a joint group of individuals that, more than oversee 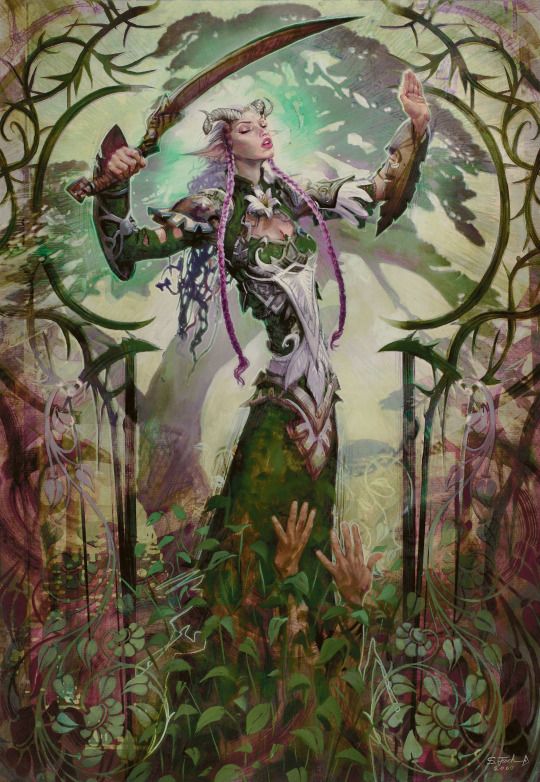 Darkvision. You can see in dim light within 60 feet of you as if it were bright light, and in darkness as if it were dim light. You can't discern color in darkness, only shades of gray.
Keen Senses. You have proficiency in Perception.
Fey Ancestry. You have advantage on saves against being charmed, and magic can't put you to sleep.
Trance. Elves meditate deeply, remaining semiconscious, for 4 hours a day in place of sleeping. You gain the same benefit that a human does from 8 hours of sleep.
Larinian Weapon Training. You are proficient with the longsword, scimitar, shortbow and longbow.
Fleet of Foot. Your base walking speed increases to 35 feet.
Mirage Form. Other creatures have disadvantage on ranged attacks against you when you are lightly obscured by shifting sand, bright light, foliage, heavy rain, falling snow, mist or other natural phenomena.

Languages. You can speak, read, and write Common and Elvish.

beautiful. realy interesting. I love your job . Continue like that.

Thank you very much! Deeply appreciate it!