Be it from having been born of demons and humans, or making deals with demons to empower themselves, the outcome of the offspring will be the same. To be greeted with stares and whispers, to suffer violence and insult on the street, to see mistrust and fear in every eye: this is the lot of the tiefling.
Tieflings suffer during the entirety of their lives, cursed to be discriminated for their heritage no matter where they go. To the mortals, demons and devils are among the most despicable and disgusting creatures, the most evil and conniving things conceivable. The spawn of such creatures, in their eyes, couldn't be anything close to virtuous. The only exception to this rule is in the halfling lands, where a small community of tielfings live and that small plot of land (to the chagrin of the rest of the world) is under halfling protection, a source of constant political debate.

Tieflings often have horns, tails and some even wings. They often have fang-like teeth, crazy skin colors (purple, red, orange), and sometimes even demonic bone protrusions, increasing their intimidating visage.

Tieflings are derived from human bloodlines, and in the broadest possible sense, they still look human. However, their infernal heritage has left a clear imprint on their appearance. Tieflings have large horns that take any of a variety of shapes: some have curling horns like a ram, others have straight and tall horns like a gazelle’s, and some spiral upward like an antelopes’ horns. They have thick tails, four to five feet long, which lash or coil around their legs when they get upset or nervous. Their canine teeth are sharply pointed, and their eyes are solid colors—black, red, white, silver, or gold—with no visible sclera or pupil. Their skin tones cover the full range of human coloration, but also include various shades of red. Their hair, cascading down from behind their horns, is usually dark, from black or brown to dark red, blue, or purple.

Tieflings mature at the same rate as humans but live a few years longer.

With the exception of the small tiefling village, there is no official social body of tieflings, and almost all of them are fiercely independent.
In the case of the village itself, it has a village head, elected every two years.

Tieflings are scarcely spread across the world. The only place they have an actual community is in the Halfling lands, and even there halflings have lately become increasingly suspicious, though it's not known why.

Tieflings know both Infernal and Common. Infernal, interestingly, is something that is inherently known by tiefling infants, something that is suspected to be because of their blood heritage. To non-fiend or hellish individuals, it's hard to speak infernal without a heavy accent, as the voices of the more native individuals seem to echo with crackling fire and rolling rocks.

Tieflings are all outcasts, and often band together in defiance of whichever society they are oppressed by. Often, tieflings sign up with thieves' guilds or other dubious organizations, able to freely enact their wills without having to worry about their oppressors.

Long ago, there existed Demons and Devils on Malkor, long before Bahamut ever walked on the plane. But they were banished and imprisoned into a separate plane, and not until Sargoroth, a rare noble demon, invented infernal contracts as a magical link, were they eternally trapped in their prison.
Though the Noble Demon God may have made the contracts with an aim to better his siblings, it did not succeed, and demons and devils alike have abused the system to break through to Malkor, wreaking havoc in many ways. It was when this started happening that Tiefling started popping up; Be their heritage from a demonic-human relationship, or a human trading part of their humanity for infernal power, their children are cursed to a half-demonic existence. 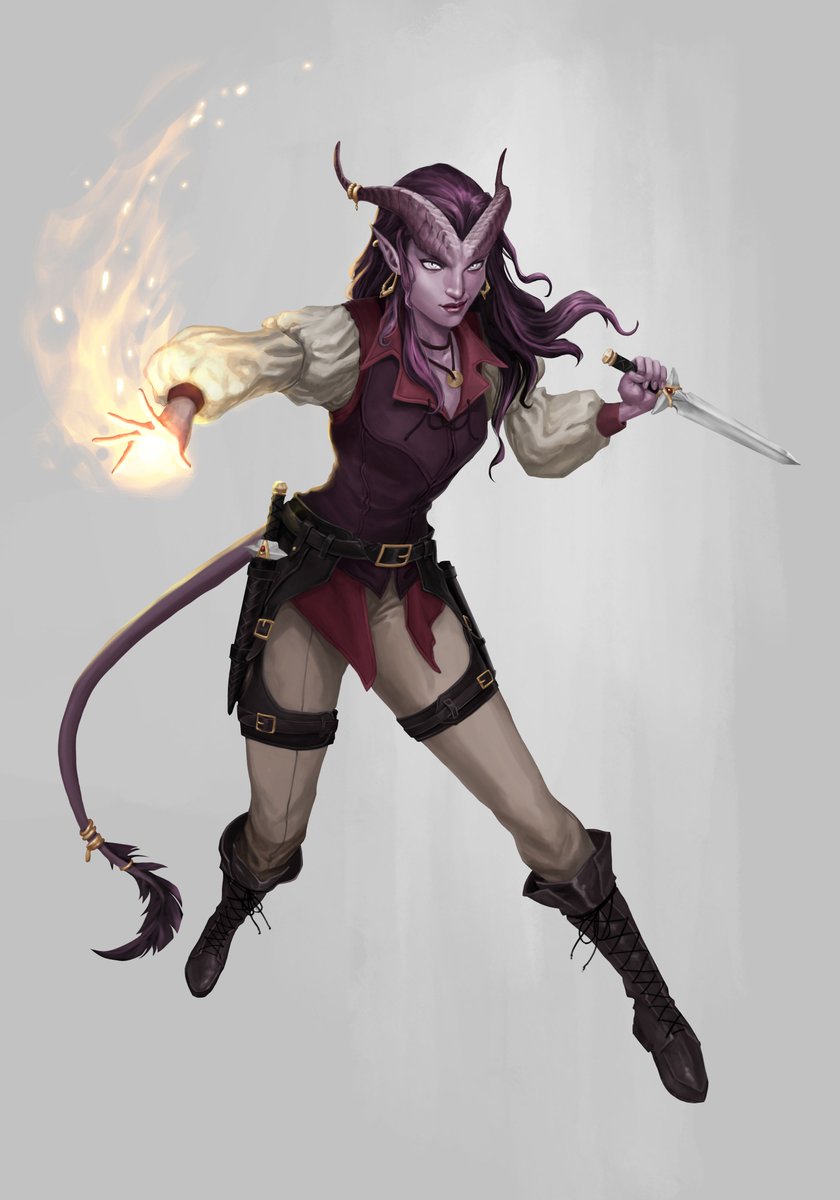 Fortune, in all her glory! by Joma

Origin/Ancestry
Humanoid, Demonic
Lifespan
Approx. 120 years
Average Height
1.6m - 1.8m
Body Tint, Colouring and Marking
Tieflings are colored in strange variances of blue, red and orange, even yellow - Most colors are not off the table when there is talk of a tiefling.
It's not unusual for Tieflings to add tattoos to commemorate important events, or to represent their virtue name.


Remove these ads. Join the Worldbuilders Guild
Gnomes
The People of Malkor
Nephalem

Languages. You can speak, read, and write Common and Infernal.