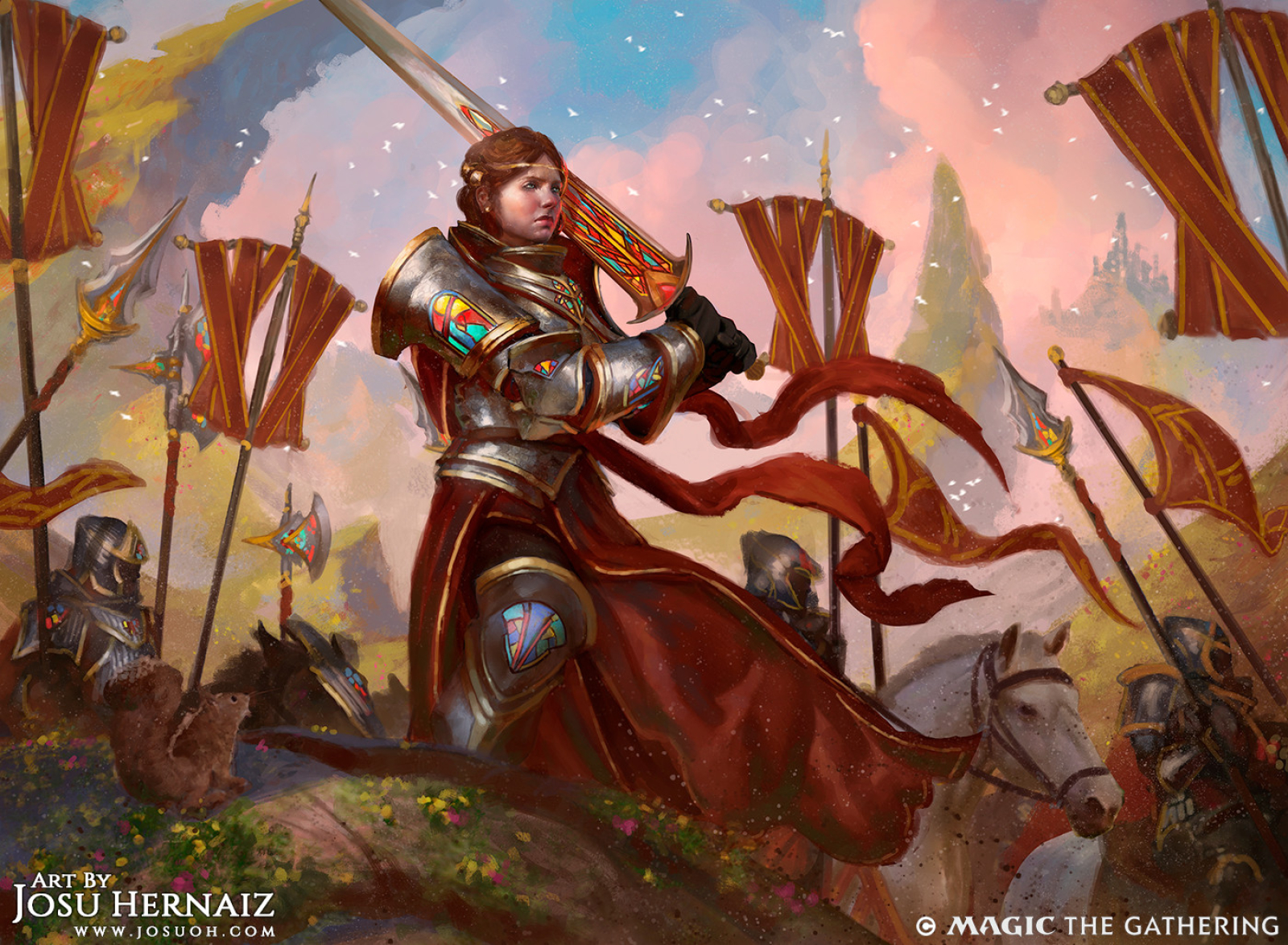 The Peacekeepers are the largest military organization in the world. Working in close relation to the Church of Bahamut, they strive towards ultimate world peace. They are governed by the Platinum Council, individuals chosen from all over the world, to maintain said peace, and always led by a member of the dwarven clan, the Peacekeeper family. The current head is Kaldorûn Peacekeeper, the Shield of Steel, and his tenure over the Peacekeepers has lasted for over two hundred years.
The Peacekeepers are positioned in forts, garrisons and outposts all across the lands, their primary directive to protect the people it's stationed by from any evils, be it bandits, goblins or otherwise. Many bands also patrol across the nations, intending to keep the roads safe. Where the Peacekepers aren't needed (like the high elven capital, for example), they simply have embassies stationed, often doubling as churches where their influence is smaller, so that any follower of Bahamut can more easily find a place to pray and rest.

Military structure; Uses military ranks to determine hierarchy, with a few exceptions; Clerics of Bahamut not employed in the Peacekeepers maintain special permissions, including temporary residence in Peacekeeper facilities, though they in return oversee rituals and religious proceedings while staying.

The Peacekeepers fight to make the world a better place by the Platinum Will of Bahamut.

Forts, outposts and embassies all over the west; Links to the church, employment akin to a large adventuring guild in some areas, large amounts of troops deployed all over the world. The general support of most inhabitants of Malkor.

Originally a small army was stationed at Sanctuary, the original fort which Gilgamesh now uses as the capital of the Dragonborn, Bahamut later saw fit to create a grand army, called the Platinum Army, to protect the world against large threats. Eventually, after the bitter two thousand year long Dragon Wars, and after Bahamut and Tiamat's death, the Platinum Army dissolved, returning to their old lives, rebuilding the world. But the Church of Bahamut kept quite a few of the soldiers, and recruited the aid of their old allies, the Peacekeeper dwarf clan. They rebranded the Platinum Army into the Peacekeepers, a force now intended to aid the world of Malkor in its healing, by protecting it from evil wherever it may lurk.
The Peacekeepers came at a quite key point in time for the people of Malkor, as following the war, the world was in complete disarray, reeling from the loss of its leader, the being that had governed almost everything in the world. The Peacekeepers brought stability to many chaotic places.

The Peacekeepers hold the ground of each base and outpost they have constructed.

The organization is an almost purely military one.

While other religions are tolerated, bar Tiamat's, it is assumed that one has at least some measure of faith towards the Platinum Dragon when joining the Peacekeepers, though such beliefs do not have to manifest in constant prayers or the like.

Though many see the Peacekeepers as a force for good, many are also suspicious, some seeing it as an inferior military act, others as a distrustworthy group that will one day take over the world; There are as many wild theories as there are debunkers.
Overall however, the Peacekeepers keep a strong relation with most of the world. The one exception specifically is the North, in which many cities and towns act autonomously, and have actively rejected Peacekeeper assistance, though they have accepted embassies. The strongest relations are with the dwarves, as they are also the prime force these days within the ranks.

The Peacekeepers maintain a few industrial establishments for the purpose of food supplies, but often have established trade with the locals to have a healthy relation going with the people there.

Often, the Peacekeepers act as liasions between different organizations, towns, cities or countries. They in return recieve payment in gold, food and other supplies. Some areas employ adventurers rather than their own soldiers because of the scarcity in those areas, and in such cases act more like guilds. In some ways, the Peacekeeper organization can be seen as one gigantic, worldwide guild.
While there are no official "Peacekeeper trade routes", the organization maintains and protects the already existing routes, since their outposts are always built close to said routes.

Reading and writing is a basic requirement for all Peacekeepers, and some cities hold specific military schools which groom individuals to become mighty Peacekeepers one day, the dwarven city of Thalassar hosting the most prestigious ones. However, the Peacekeepers yearly host trials across the lands, to find new recruits, and the trials' tests always ensure that a recruit will have basic understanding of writing, reading, and combat strategy. As such, it's quite common for larger forts to host libraries open to the public, in order to allow for aspiring recruits to freely study for their exams.

Being a mainly dwarven organization, the Peacekeeper fortresses all have proper sewage systems and always have a proper road close by. If the townsfolk they are protecting can afford it, they often install the same commodations of sewage to them; Construction is expensive!

Though the organization itself does serve the Church of Bahamut, because of active desire from many of its members, they do not force their beliefs upon their members. However, because Bahamut's descent into the mortal realm is a historical fact, there aren't really any members who don't believe in his existance, though some legends and stories might come to be questioned.

Follow the Platinum Will. That is, protect the weak, challenge the cruel, and let light always prevail.

Having been originally founded in the Dark ages, the Peacekeepers looked always for the betterment of the world. As such, they hold to their hearts close that a battle is never one they start, but one they might well need to finish. They believe in peace, diplomacy, and an open mind rather than a closed fist.

Priests, with the exception of Battle-Priests, are often outside of the organization's jurisdiction. They have some leeway when in Peacekeeper outposts, but don't hold infinite sway. They are more like esteemed guests.

It's rumoured that some higher standing members of the organization have draconic powers, and many tales are spun of individuals taking on entire armies of goblins by themselves, or miraculously saving someone from a certain death.

Peace by Platinum Will.

History of Benalia by Noah Bradley

Founding Date
8 AD
Type
Military, Army
Capital
Thalassar
Alternative Names
The Platinum Army
Training Level
Elite
Veterancy Level
Decorated/Honored
Demonym
Peacekeepers
Leader
Kaldorûn Peacekeeper
Head of State
Kaldorûn Peacekeeper
Head of Government
Kaldorûn Peacekeeper
Government System
Stratocracy
Power Structure
Federation
Economic System
Mixed economy
Currency
Malkoran Marks
Major Exports
Mostly, the Peacekeepers exchange their services of protection, but some outposts have specialized based on their surroundings.
Major Imports
Most of the organization's goods are acquired through trading with locals. The money is acquired through donations, cuts from the church, as well as gained through exchanging services with the local establishments. Often, the protection of the Peacekeepers is traded in exchange for supplies such as food and raw materials.
Legislative Body
The Platinum Council, representatives from each race, aid the Peacekeeper leader in important decisions, and each oversee regions of the world. Some members focus on other specific areas of expertise rather than geographical areas.
Judicial Body
The Peacekeepers do not per se create any laws, officially. They aid the people and their laws as best they can, but to gain a Peacekeeper's protection certain conditions have to be met. These laws are enforced by the stationed Peacekeepers, and failure to maintain the accepted terms results in at best a fine, or worse, termination of the contract.
Official State Religion
The Church of Bahamut
Parent Organization
The Church of Bahamut
Deities
Location
Thalassar
Related Ethnicities

The Church of Bahamut

80
While the Peacekeepers ultimately serve Bahamut, they have become a more independent organization since they were founded, though the keep close and friendly relations with the Church.

-25
The people of Svalbard hold no trust toward the Peacekeepers, having had a distrusting relationship with the Church of Bahamut for a long time. Though they tolerate the Peacekeepers because of their choice to more distance themselves from the Church, they still hold very small trust over the followers of the Platinum Tyrant.

0
The Parlethians are bitter, handing down an ancient grudge when their ancient city was destroyed. They do not actively hate the followers of Bahamut, but they are severely distrusting of them. This of course includes the Peacekeepers.

Articles under The Peacekeepers