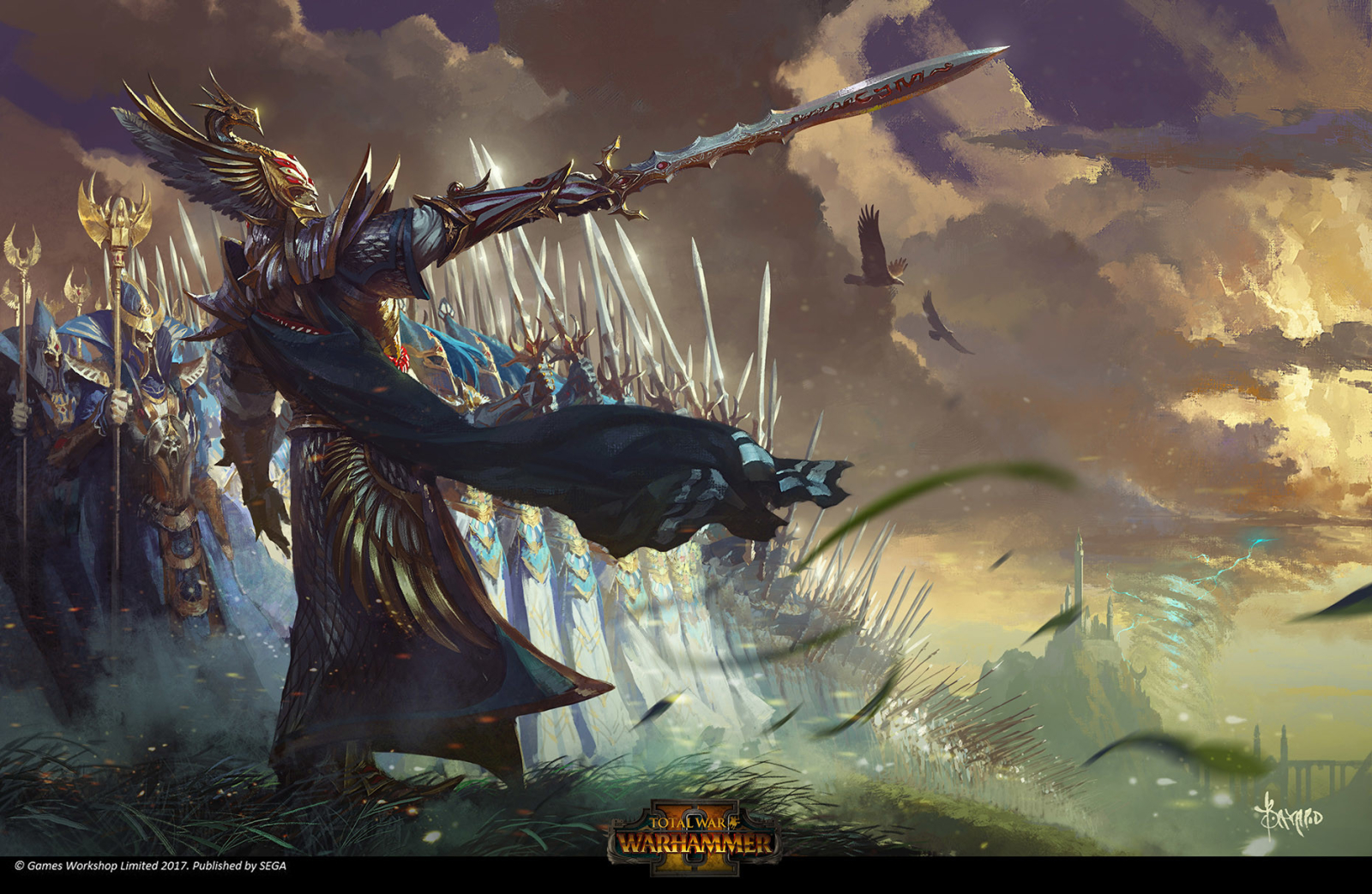 Cover art by Bayard Wu. Article by Shpjokk.
Above the rest of Malkor's people (quite literally), the high elves are extremely cold as the North, calculating and considerate of their surroundings, prioritizing political power over most other things. High elves are driven through cold logic, and rarely ever act on emotions, instead citing laws and reason, and evidence, in favor of personal feelings.
High elves generally have high expectations and do not hide that fact. They consider the societies of the younger races very primitive and chaotic, only really giving credit to the dwarves, the only sapient race older than them. They look on half-elves with some degree of pity, and they regard half-orcs with unrelenting suspicion, a price from older times of wars between high elves and orcs. While they can be haughty, Elves are generally pleasant and gracious even to those who fall short of their standards (a category that encompasses just about everybody who's not an elf).
Though an outsider might look at a high elf and see quite the high-and-mighty fop, the other races generally see the high elven society as an ideal of beauty. The high elves, while disdainful and prideful, back up their pride fully with their impressive skill, intricate attention to detail, and strict adherence to perfection.
The high elves are a society divided into castes; Each individual has their role, and is expected to fulfill their part in society. They do however recognize that not all are born perfectly into their position, and therefore have schools, universities and education camps set up in order to more efficiently recategorize 'confused citizens'.

More than the other elves, the high elves covet titles more than anything else, as it denotes their social standing. High elves acquire and wear titles more eagerly than they own a personal name, and always list their titles with pride. Unfailingly, though, they will always display their family name with great pride.

High elves speak elvish, and almost exclusively so. They have common interpreters if they are higher seated to speak for them in the 'lower language' as they call it, though they understand the language perfectly. Strangers speaking elvish with a high elf often meets with pleasant looks of surprise.

High elves are heavily based on their caste, and on knowledge and logic. They ensure that all elves have basic education in math, language and history, having free education. Being allowed into a high elven school is often considered quite the feat for other, younger races.
Every dispute, every petty problem, every little consideration, has a law. If that law is broken, then it is taken into the court of law. Quite often an elf trying to vouch for power preys on their victims until they can find a reason to bring them into a court of law. Where the goliaths have gladiatorial events, the high elves enjoy court events, where fierce words and arguments and spirals of logic are thrown instead of curses, slashes and punches.

High elves regard women higher, regardless of gender, than they do men. This is because they consider women to be closer to the Silver Queen, regardless of gender, than any man could ever hope to.
These elves put their value highly in the law, and expect all that come to their lands to follow them. Failure to do so often results in very harsh punishment. Of course, they realize that one cannot follow the law without first reading it, and supply newcomers to the elven lands with their own copy of their lawbook, monitoring and documenting which individuals get which book.

High elves have incorporated the leylines they've built their cities and towns on intricately; The main method to traveling through the Silver City is by teleporters, as it takes an entire two days to travel from one end of the city to another by foot.

It is common courtesy to recite one's titles and house to those they engage directly with.
Disputes between individuals is often settled in the courtroom, rather than on a field of battle. Not unusually, two elves settle their disputes using a minor court happening, often turning a simple land dispute into a hanging.

Even before the elves were sent to Malkor, the high elves knew of their grand position in the universe. They consider themselves of the finest make, and they display it proudly through wrought gold and silver. They maintain their fierce discipline and adherence to perfection especially well within the capital in the north, and see the cold climate as the perfect everyday challenge for them to more easily reach perfection.

The high elves are minimalistic, some would say spartan, in their clothing. To them, they are organized and orderly, and each caste and category has their own kind of clothes and decorations, so that one can easily discern who they are talking to.

It's common to recite to one's children the lawbook, reading it for them just before they go to sleep. No high elf worth their salt does not know at least a quarter of the lawbook in their head, especially not the laws which apply directly to their profession.
Quizzes often happen at bars about the law and reserved, orderly get-togethers often to test the intelligence of its participants.

Each birth is recorded, documented and stored at the Records Halls. The hospitals which admit to-be mothers lays just beside it, to ensure documentation as quickly as possible.

A test to see a child's asent to adulthood is often to put them in a courtroom, letting them handle a case entirely without help. Though a child may not need to win the trial, they are expected to make no mistakes.

When a high elf dies, the size of the funeral rites are proportional to the influence and sway that individual held, and not coming to someone's funeral is a common power move to display.

High elves view the world with logic. Compared heavily to their other cousins, they have a more alien way to feel emotions, and they look more towards societal power rather than physical beauty, though a symmetrical and artistically pleasing face does not hurt.

The influence of the Queen has set a rigid society with all elven girls wishing to be like (or sometimes, be) the Silver Queen, and all boys wishing to be the mate or partner of the silver queen, the most influential individual in the high elven world, and to them, the entire world. The women in the high elven society are seen as superior, as they are closer to their queen than any man could ever hope to be.
Consequently, lesbian relationships are quite common in the Silver City.

A common gift amongst high elven nobles is a political campaign for a higher set noble, in order to place them in a better position. Such gifts both strengthen bonds between two families, and give one person a boost of political power, something which high elves covet very highly.

High elves look to marry for political reasons, often for increasing power in the family, or for their own personal gain. Their version of "love" often comes from a more "logical" feeling to them, in that it feels to them like "it makes sense to marry this individual."
High elves rarely care about the gender of their partner, though they all prefer women because they are considered closer to the Silver Queen.

The most influential of the families, the royal high elven family, Ma'thalar, has ruled the Silver City for millenia, but the city's more intricate politics and governing is handled by the Silver Council. This council is subject to constant backstabbing and powerplays in order to gain the favor of the Silver Queen.
The Silver Council holds elections every tenth year, and grandiose political campaigns are held almost weekly for influential and less influential families to gain the favor of the people, to become elected. Reading elven news about the scandals of the Council candidates ranges between fascinating to enjoyable to gruesome. 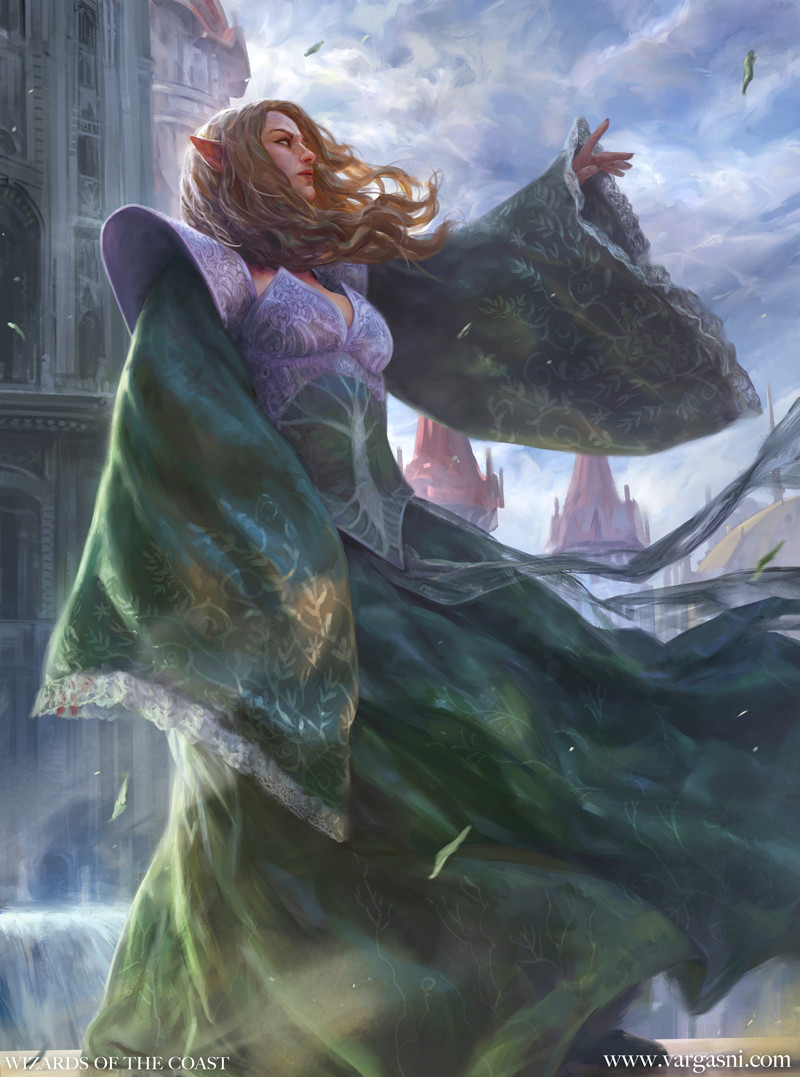 Emmara, Soul of the Accord by Randy Vargas

Darkvision. You can see in dim light within 60 feet of you as if it were bright light, and in darkness as if it were dim light. You can't discern color in darkness, only shades of gray.
Keen Senses. You have proficiency in Perception.
Fey Ancestry. You have advantage on saves against being charmed, and magic can't put you to sleep.
Trance. Elves meditate deeply, remaining semiconscious, for 4 hours a day in place of sleeping. You gain the same benefit that a human does from 8 hours of sleep.
High Elven Weapon Training. You are proficient with the longsword, shortsword, and heavy crossbow.
Cantrip. You know one cantrip of your choice from the wizard spell list. Intelligence is your spellcasting ability for it.
Mountain Born. You're acclimated to high altitude including elevations above 20,000 feet. You're naturally adapted to cold climates (See page 110 in the PDF of the Dungeon Master's Guide; Chapter 5).

Languages. You can speak, read, and write Common and Elvish.