It is unknown of the true origin of halflings, but one day, the formerly lands in the west infested by goblins was suddenly inhabited by the first few halflings. Some speculate they came from goblins, and developed intelligence; Others say they were molded from the earth itself.
Halflings are by nature calm and, humans often think, lazy. In truth, that isn't the case. Halflings simply take things at a slower rate than humans do. They are also quite shy towards strangers and outsiders, and often don't actively seek interaction with them. The comforts of home are the goals of most halflings' lives: a place to settle in peace and quiet, far from marauding monsters and lashing armies; a blazing tire and a generous meal; fine drink and fine conversation. Though some halflings live out their days in remote, agricultural communities, others form nomadic bands that travei constantly, lured by the open road and the wide horizon to discover the wonders of new lands and peoples. But even these wanderers love peace, food, hearth, and home, though home might be a wagon jostling along an dirt road or a raft floating downriver.
Most halflings live in small, peaceful communities with large farms and well-kept groves. They rarely build kingdoms of their own or even hold much land beyond their quiet shires. They typically don’t recognize any sort of halfling nobility or royalty, instead looking to family elders to guide them. Families preserve their traditional ways despite the rise and fall of empires.
Halflings are known to live among other races, where their hard work and loyal outlook offer them abundant rewards and creature comforts. Some halfling communities travel as a way of life, driving wagons or guiding boats from place to place and maintaining no permanent home.

Halflings are small, shorter than even dwarves, and even at such small statures are often varied in their physical size. Stouter halflings are not an uncommon occurrence though, what with their love for food. They do however, have quite large feet, in contrast to their smaller stature.

Halflings live up to around 270 years, and mature at half the rate of a human, reaching maturity around their late thirties.

Halflings often have a bit bigger noses than humans do.

Halflings are mostly based in the Halflings Hills, far west of Sanctuary. For stout halflings, they have a few settlements around the Dwarven Barrens, and one or two villages in the Hills.
A small tribe of strange halflings are said to live in the southern Barrens, but it's well-hidden, and few have ever seen them.

Halflings, though not a people as well educated as the high elves, still are intelligent, in their own ways. But, because most of the work of halflings is more the hands-on kind, like farming and fishing, not too many halflings from the Hills are educated beyond basic mathematics.

The largest known city of the halflings is on the westernmost coast, called the Hillrise, and is one of the largest coastal towns known today. Though halflings are largely independent of each other, they have a small set of base laws that apply to the entirety of the Hills, governed and diplomatically voted for through the government in Hillrise.

Halflings speak halfling, which has some similarities to both dwarven. It's not unlike how swedish and danish are close.

Halflings are easily moved to pity and hate to see any living thing suffer. They are generous, happily sharing what they have even in lean times. Those who find themselves in the care of halflings can rest assured that they will be treated well, so long as they reciprocate in kind with respect and good stories of their travels.

Halflings are an affable and cheerful people. They cherish the bonds of family and friendship as well as the comforts of hearth and home, harboring few dreams of gold or glory. Even adventurers among them usually venture into the world for reasons of community, friendship, wanderlust, or curiosity. They love discovering new things, even simple things, such as an exotic food or an unfamiliar style of clothing.

Traditions and festivals litter the halfling culture. The one festival that's known wordwide is the Festival of Spirits, a biannual event where the halflings feast and enjoy themselves for three days straight, then pray in respect for their dead for two straight days.
Halflings that are exemplified for their heroics are often given the title "From Under Hill", in respect to Teriades Underhill. It's not a title many claim, partially because halflings do not actively seek adventure.

A further time back, the Hills were infested with only goblins. Though there are still several tribes of goblins in the Hills, when the halflings popped up, the goblin population dwindled rapidly with the spreading of the halflings. Among the people, the heroics of the first halfling king, Teriades Underhill, who managed to drive out the goblins from what is now the Halfling Hills, and gave his people a place to settle.

Teriades Underhill, the first king. His heroics in driving out the goblins from the Hills to establish the first halfling settlement is known throughout all of the halflings' lands. 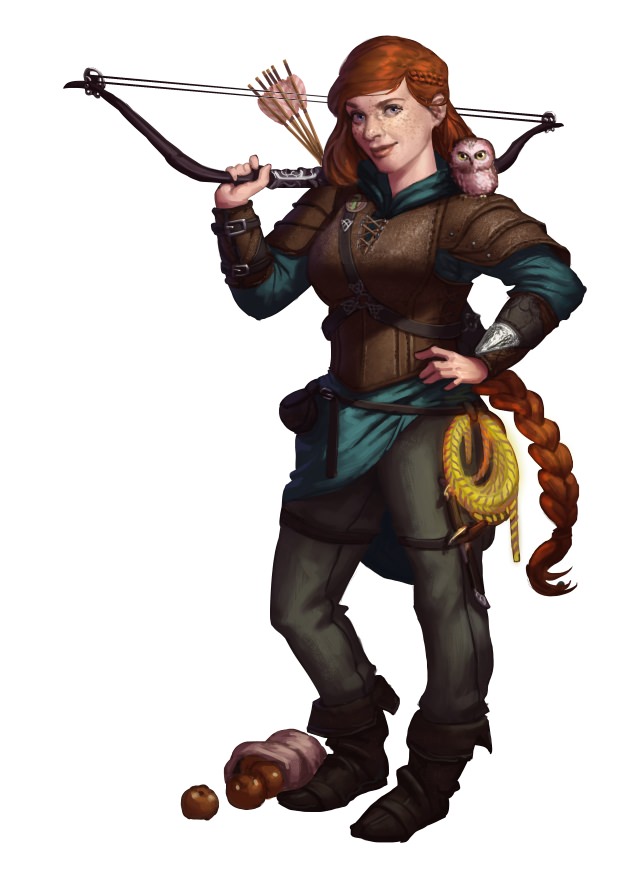 Origin/Ancestry
Humanoid
Lifespan
Up to approx. 300 years.
Average Height
90-110cm.
Average Weight
45-70kg
Average Physique
Halflings come in all shapes and (smaller) sizes. It's not uncommon to find a scrawny halfling, but just as well it's not uncommon to find a bulky one.
Body Tint, Colouring and Marking
Halflings often look like smaller humans. This also applies to their skin color and hair colour, etc.

Ethnicity | Dec 31, 2018
Half-Orc
The People of Malkor
Human
Cover image: Over and Under Hill by Chris Rahn