According to ancient texts the island of Thera (now known as Santorini) was in the Minoan period a significant and prosperous centre of trade. Its main settlement, Akrotiri, was an important point in the copper trade in the Eastern Mediterranean as well as a centre of processing copper. Some people suggest that Thera is the mythical Atlantis, a landmass and well prospering country swallowed by the sea. The effects of the eruption were felt far away from Thera. The ashfall from the eruption on Thera and the tsunami caused by the eruption resulted in a devastion and starvation of the Minoan settlements of Crete. The weakening of the Minoan civilization made it easier for the Mycenaeans to conquer Crete. Some effects of the Theran eruption could have been seen in Egypt and even China. Chinese texts mention a volcanic winter around the time of the Theran eruption. These events are associated with the fall of a dynasty.
After the eruption most of the island was destroyed. Surviving parts of it created a caldera filled with sea water. Currently, there are three islands making the bounderies of the calder: the biggest Thera/Santorini, Therasia and the smallest Aspronisi. In the middle is a big island (Nea Kameni) which is the vulcano that erupted in the 16th century BCE.

We were lucky. We left Thera a few days ago. Last night we saw a big cloud of dark smoke coming from the direction of the island. The crew speculates that the giant mountain in the middle of the island exploded. I heard that there was something special about that mountain.
— Mycenaean merchant in his ship log

Since the eruption people visiting Nea Kameni (the island in the middle of the caldera) were saying to see there strange objects and even people. Many texts say that people saw gods there. The most recent report comes from the 19th century from an expedition looking there for the Genitals of Uranus. Their journal says that on the island they found an ancient spear preserve in a perfect condition. Another thing they found is a necklace which started to glow after being cleaned. Currently, the most common explanation is that the eruption opened a portal to Heaven on Nea Kameni. Through this portal gods were visting Earth for brief periods of time. Nea Kameni is also one of the place people looking for Celestial Dust go. 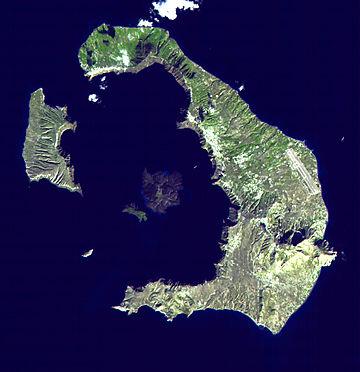 I like his! You found your magical twist and fitted it perfectly :)

I thought of this twist when you said to think about how the eruption changed the island. So thank you for inspiration

again - glad to have helped :)