It crept, a conglomerate of shadows and glowing eyes that shuddered and squelched, as countless limbs shifted within the mass that drained light from the torches on the cracked stone walls.   Only an old nun stood between the door and the beast. The whimpering of children, whose mothers even now tried to shush them, was a soft choir to the chant of the nun as she waved a lantern high. Fabric rustled as a young girl in white robes tried to crouch lower in the shadow of the lintel, clutching incense that smoldered slowly. The courtyard was full of the scent of burning sage.   It moved closer, headless of the chant or the light or the sage. Perhaps today the gods watched silent and uncaring. The old lady's chant faltered. Its many limbs leapt as one and the girl in white screamed. The scent of blood and burning flesh rose into the dawnbroken sky as it feasted.

The Shelgoth are Immortal, the darkest and most vile form of the greatest forever-beings. Their origins are as murky as their motivations, but Shelgoth had existed almost as long as the Divine themselves. They have been called such names as the Servants of Guamata and the Creeping Stains. Though they dwell upon Macalgra primarily and are rarely organised, some with no more intelligence than a feral dog, in times of strife they often rise to overwhelm civilisation and the gods.

Shelgoth are best described as a living shadow. They are floating souls which have become so darkened that the Aether they are made up of has turned black. They can grow and lose limbs as they wish, for their physical form is essentially pure magic. Shelgoth come in many forms, and most choose one based on their hive. Identifying features of a particular hive may include anything from being quadrupedal, having a single large eye, or arcing with electricity. They can shift shape as will, and will often do so to disturb their victims.

Shelgoth reproduce asexually. The can, at will, split their souls into new beings; creating two, new and weaker Shelgoth and destroying the original but leaving both new Shelgoth with fragments of the memories of their parent. They can only undertake this process about once every thousand years, after having accumulated enough magic for their soul to reach a high enough critical mass.

Shelgoth thrive in the darkness, in places where the touch of the Divine and of powerful mortals is rare. They prey on rural communities, moving after every attack, retreating into the depths of inhospitable environments. Mostly unaffected by the physical world, they may be found dwelling in such diverse locations as volcanos, ancient forests and the depths of lakes.

The Shelgoth, simply enough, consume souls. They torture mortal and Formless Animus, seizing and consuming the energy released when the soul lashes out in an attempt to defend itself. Slowly, they will siphon away a victim's energy and magic, killing the mortal body as the soul wraps itself tighter and tighter inside to protect its remaining Aether. Eventually, victim will expire and the soul will be left with no recourse but to try and flee the body. It is then that many will fall victim to the Sheogoth's final grasp, and be destroyed. The Feos have dedicated many of their number therefore to guarding souls as they leave their body, to prevent Shelgoth attacks, but are never entirely effective.

Shelgoth, over time, grow larger and more powerful as their soul/animus absorbs more magic. The youngest Shelgoth are little more than feral creatures acting out on violent impulses, but as they age they increase in intelligence. The eldest Shelgoth may far surpass human intelligence, and possess abilities akin to a highly skilled sorcerer.   Very old Shelgoth may become Queens, organising and leading lesser Shelgoth in hives. They are far more powerful and dangerous than lesser Shelgoth, possessing high intelligence and great cunning, as well as powerful magic and an innate ability to command Shelgoth who are not under the will of another Queen.

The Shelgoth are ancient, and their origins are debated even by the Divine. They have existed almost as long as anyone remembers, and when the first of their kind crawled into reality is lost to time. Many scholars suggest they came from The Void as a fully formed species who had evolved within the breakneck evolution made possible by the Void's eternal entropy. There is also a school of thought that they were fostered by Guamata, or are his children - hidden away when he was banished beyond the universe.   In either case, the Shelgoth were little more than a feral blight when they first emerged upon the world. They were paid little attention for millennia, little more of a nuisance than immortal rats.   The Shelgoth rose to their modern status as a nightmare to the world after the Sack of Sarirpala and the following Hunt of the Gods. At some point in their long and mostly hidden history, the Shelgoth had evolved. It is the general consensus that their Animus grew large enough to allow more complex intelligence, and certain Shelgoth rose to power as Queens. Under the leadership of dominant Queens, the Shelgoth became an organised threat.   In 11540 RC, a Shelgoth clan sacked and burned the Dragon city of Sarirpala. Dozens of Dragons were forced to reincarnate, including the Dragon King, and many more taken captive, with much of the city destroyed. The attack shocked the Divine, who largely saw the Dragons as nearly as an untouchable as themselves, and the Hunt of the Gods was organised by Raya, Divine of Fire.   Shelgoth of any clan were hunted and imprisoned by the Divine over the next hundred years. At first, the destruction of Shelgoth clans proved challenging to even the Divine but in the latter years, it became little more than a sport to the gods; toying with their victims cruelly in organised hunts and showy competitions.   Though human society was only in its earliest stages when the Shelgoth were driven back into the shadows, they became embedded in human psyche as a monster of the night, retold in many tales. And Shelgoth have in many ways encouraged this reputation, resorting for the most part to their oldest tactics of stalking and corrupting dreams into nightmares. Some become bold enough to kill humans in the physical world, but often they are quickly smited by Divine or Familiar for the action, so they remain cautious. 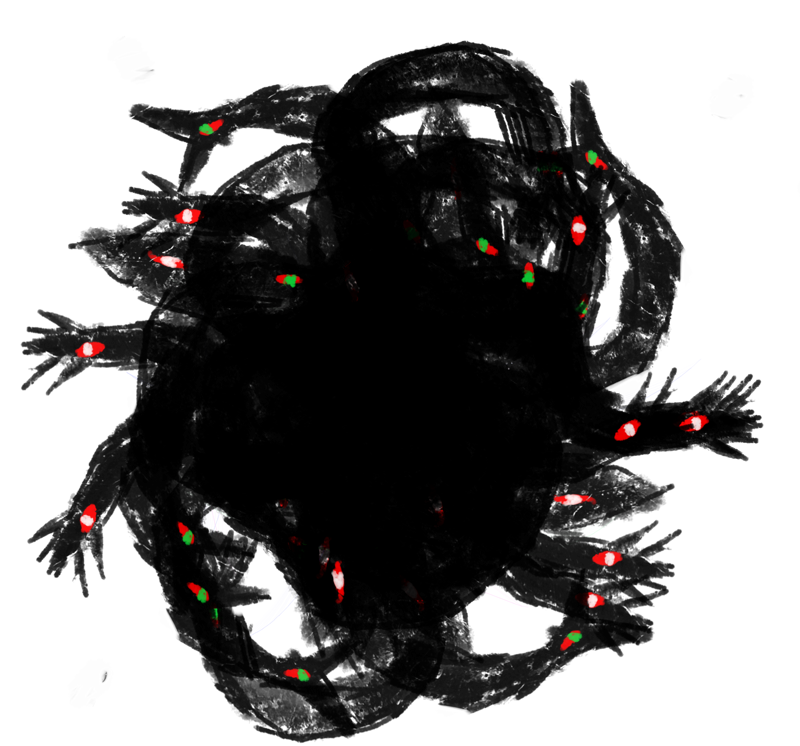 The body of a great dragon lay fallen in front of a pair of sundered gates. Scales had been sloughed off its body and the exposed skin charred. Violet blood was pooling amongst pieces of rubble and the corpses of twisted humanoids.

A broken portcullis, torn whole from its anchors, had been thrown with such force that it was now embedded in the cracked wall. Violet blood splattered the stones and the sundered wing of a fae dragon rested over the body of a woman.

A man made of stars passed through to enter a hall of columns. Great chunks of marble were torn from pillars, and at the far end of the room a golden throne lay with its back snapped off. A small green dragon lay beneath one fallen pillar, wings pinned like a scientist’s butterfly.

At last, Sarirpala had fallen. Not to time, nor the gods. But to the Shelgoth. The starry god bowed his head and weeped.