Among the many wicked, destructive and corrupted coalitions that formed in the great Merinos, the Goodletter's pact was probably the least likely to form. And yet here it is, wreaking havoc and slipping our grasp.
— Merinos bureau of private investigation's (MBI) director Brian Sonlevi

The Goodletter's pact is an unofficial alliance between one of the prominent mafia of the Merinos City, and a tribe of scholars from the Great Library. While numerous evidence of the alliance's existence were found over the decades of its existence, none of its prominent figures have ever been brought to justice.

As is often the case for unofficial organizations, the origins of the pact are blurry. A criminal organization's business is by definition hidden from the law, and unrecorded in most archives. Not to mention, before the alliance's activities were identified by investigators, several cases were probably passed as isolated Perrot and drug trafficking when the Goodletter's pact was in fact steering the wheel.   The first official mention of the Goodletter's pact as a potential major merinian cartel occurred in a press release in winter 5505 AR. However, it is likely the oganization was active for several years before that.

Origins of the alliance

If the date when the alliance began its activities is uncertain, the mechanism by which the alliance formed is even less clear. What would cause a scholarly tribe dedicated to tending the library and uncovering its forgotten knowledge to join forces with an undeground trafficking cartels?   Several hypotheses exist regarding that origin story. Some investigators are in the belief that several distinct criminal organizations both in and out of the library simply coalesced, out of shared interest. This however doesn't match well with the library's inner workings: you can't really get criminal cartels in a tribalistic structure.   Another hypothesis, popularized by the epic novel Two Fronts (written by merinian novelist and journalist Jigg Donbarrak), is that a secret tribe hiding deep in the library uncovered some unspeakable secret, and resorted to hire the mob to control the spirits they had unleashed. While very popular among the population, this hypothesis is not regarded as very serious by the various merinian police forces. J. Donbarrak has herself admitted not having factual backup for the story in an interview:

I mean, I'm just ahead of my time! Usually, wicked and criminal groups are turned into novels and legends a few decades after they stopped being active. Only thing is I did it while they still are!
— J. Donbarrak interviewed by The daily block, 5548 AR.

Finally, the hypothesis considered most likely by the merinian police forces, is that the modern alliance structured itself around... a wedding. Whether it was out of love or shared interests, prominent members of the two parties most likely got married, forcing otherwise separate entities to become allies. 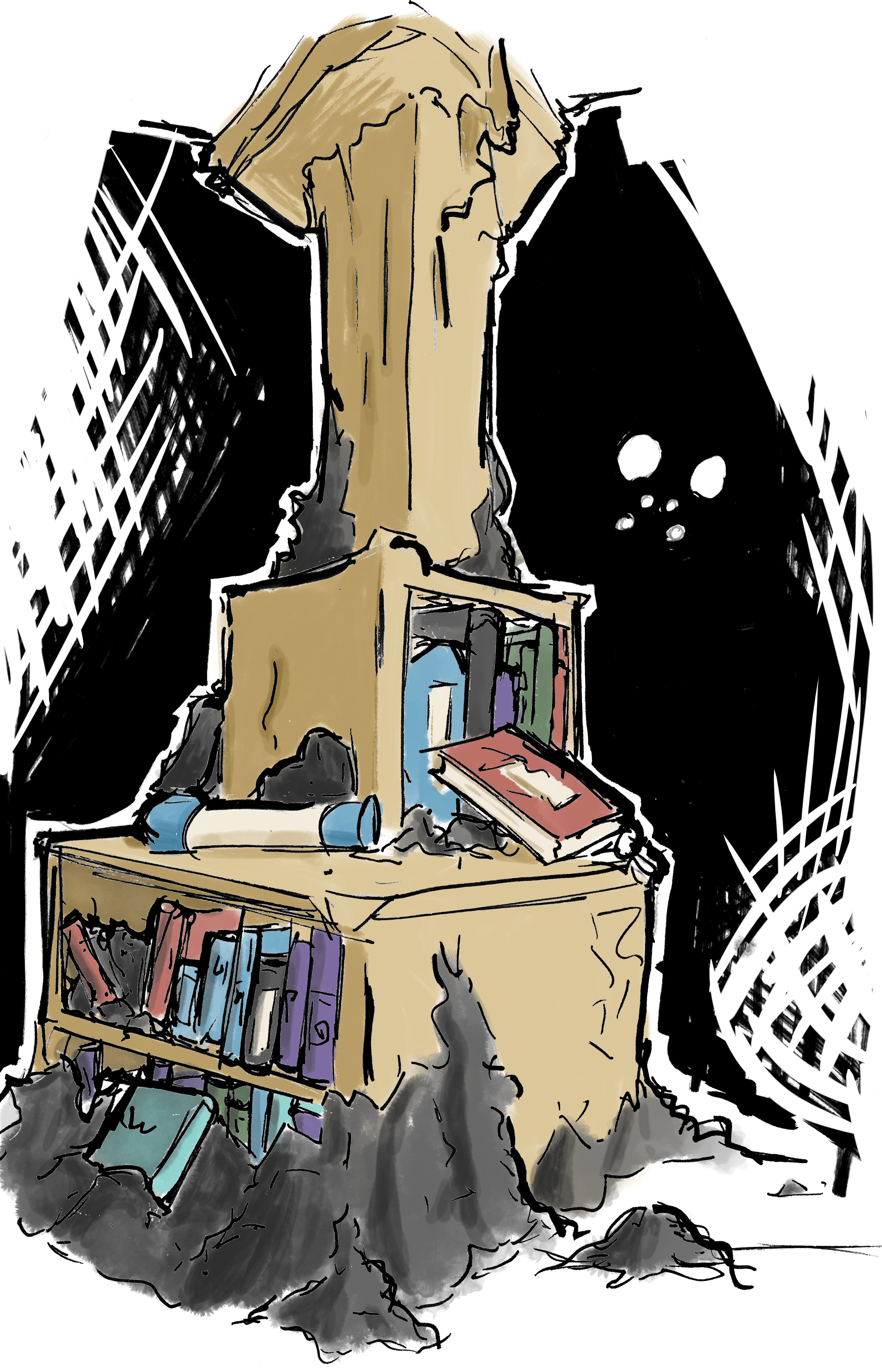 A map of the city

While the pact hasn't been caught as of now, it is well-established that it is organized around two poles: a trafficking side in the city itself, and a group associated with the Great Library. Sadly, library grounds are officially not a part of Merinos, investigating its members requires collaboration with the Library's investigation force. However, said investigation force is itself dependant on the multiple, rarely coherent, scholar tribes that inhabit the Library, and as such has its hands mostly tied.   As one can guess, this compromises any and all actual investigation regarding the librarian side of the alliance. Not to mention, most written records of the pact are likely hidden in the library, which makes them hard to know.
Librarian side
It took some time for the MBI to actually understand what was "in it" for the librarian side of the pact. Why would a tribe of neutral scientists ally with a mob? For years, the main theory was that the tribe itself had its hands tied, and that the pact was just a way to force scholars to hand out some weapons and produce some drugs.   This changed recently.

You know, diplomacy here in the Library is just as complicated as it is on the surface! Some biologists want access to a new unexplored territory, groups of sociologists want to secure their food sources, a village of mathematicians want to force others to use their personal demonstration methods and not another tribe's... And almost everybody wants more monsters fodders and cheap mercenaries to protect them during exploration.
— Library investigation force chief, Dannick Shamnun

It now appears that having access to cheap mercenaries whose death wouldn't be mourned is something almost all scholar tribe would appreciate. Such mercenaries may be used as labrats for medical experiments, as protectors of a tribe's territory and food supply, or as offerings to the dark spirits down there. An alliance with an organization that specializes in sapient trafficking would represent an easy way to fulfill such a need. 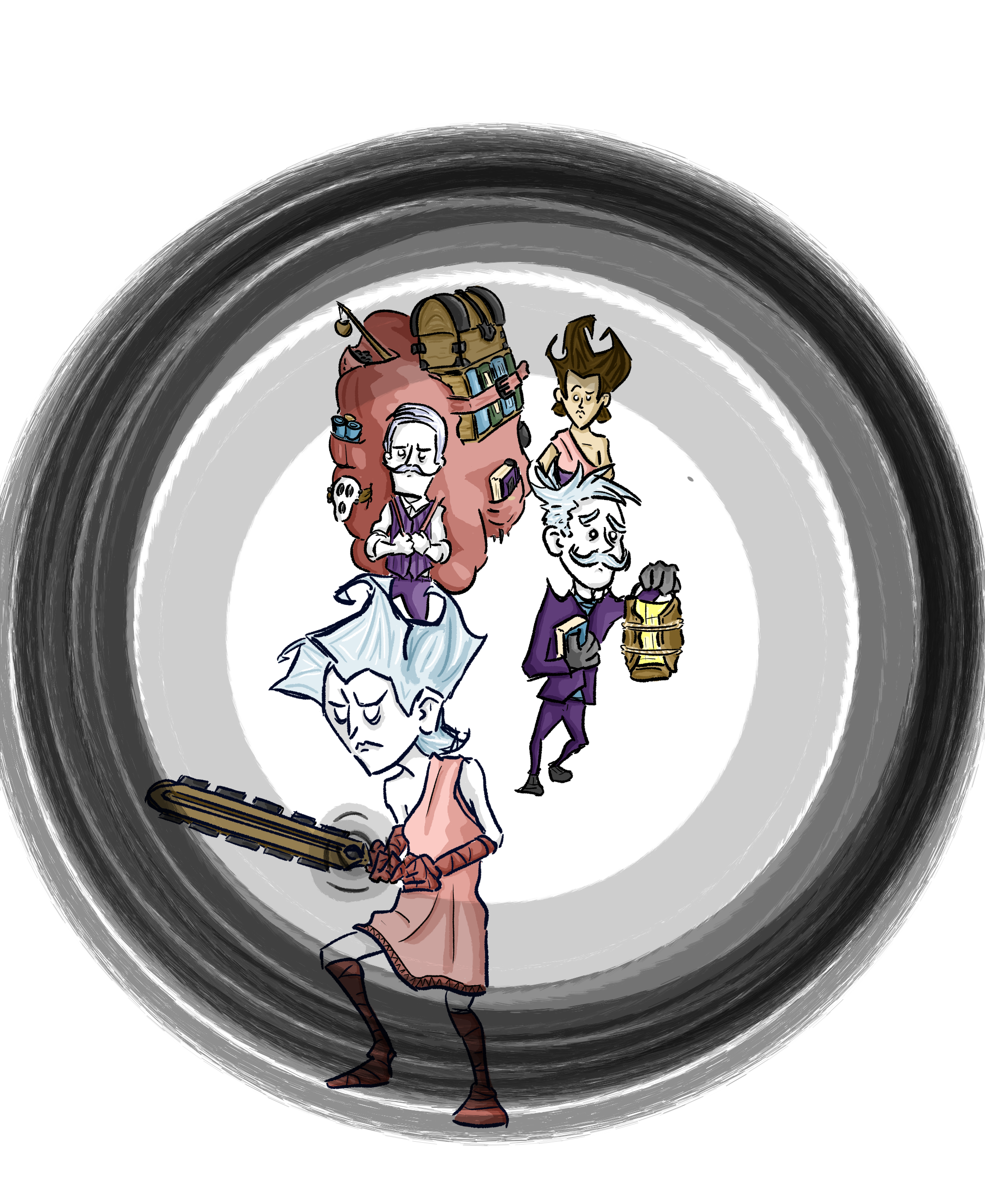 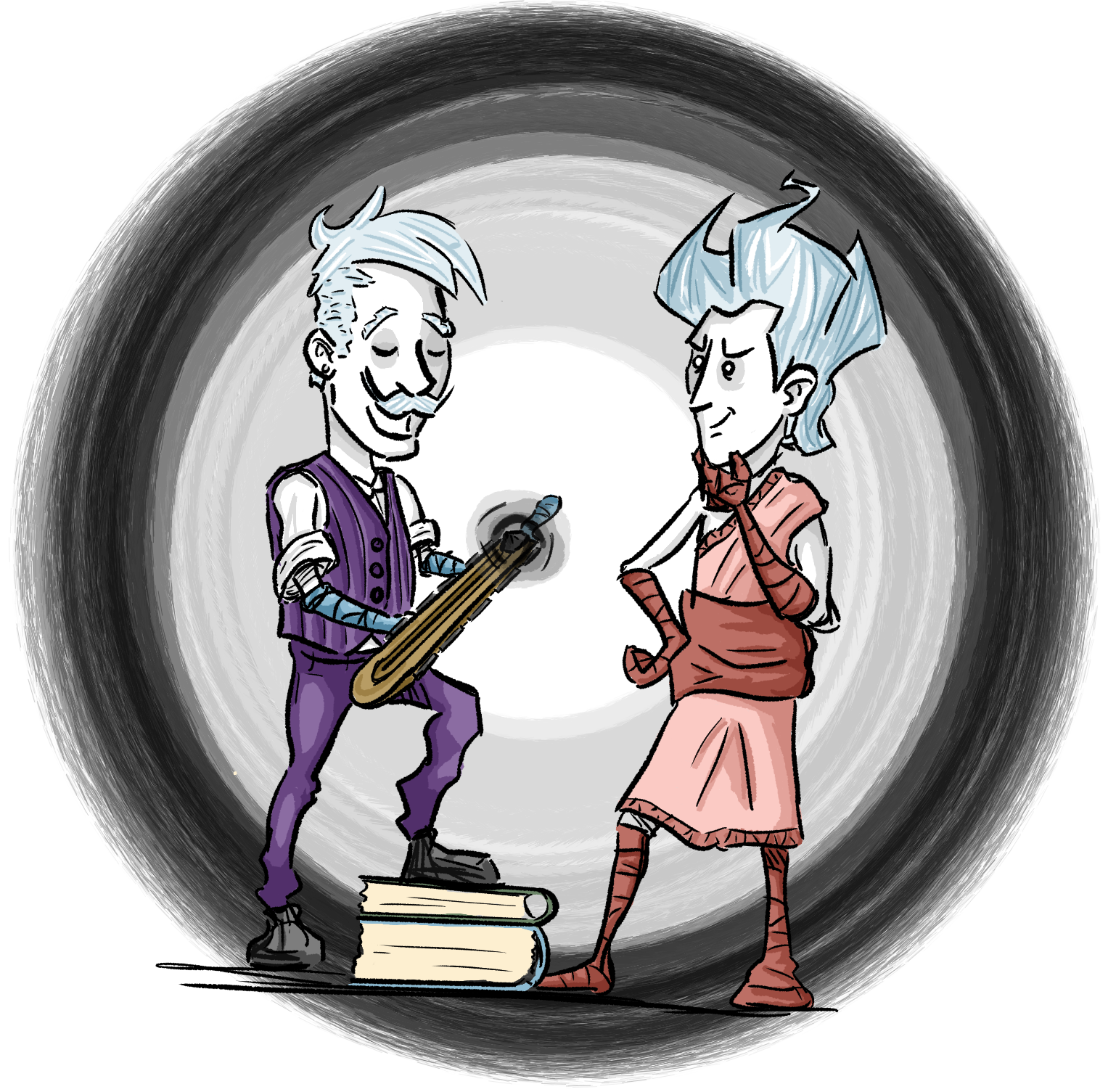 by Pouaseuille
The benefits a mafia-like trafficking group could get from controlling a part of the Merinos Library are huge, and quite easy to see. The Merinos Great Library is one of the main sources of knowledge and technological development in the entire Cylinder. It is also a direct access to the seemingly unlimited resources of the Cylinder's underground: Ghostpowder, metal, enchanted gems... Not to mention, the numerous tribes of scholars, monks and scientists that dwell in the Library are used to the manipulation of those items and the scientific methods needed to develop reliable technologies. They can produce experimental drugs, enchanted weapons that regenerate themselves, shields that induce hallucinations to one's enemies...   For an illegal group to be able to tap into such a source of knowledge, weapons, and drugs is already quite worrying. And yet, something else is even more so. It is likely that the pact's books and financial records are hidden inside the library. Not only would this make them difficult to find for any person not already knowing where they are, but it would also mean that, as mentioned earlier, the Library's Investigation Force itself must conduct investigations. 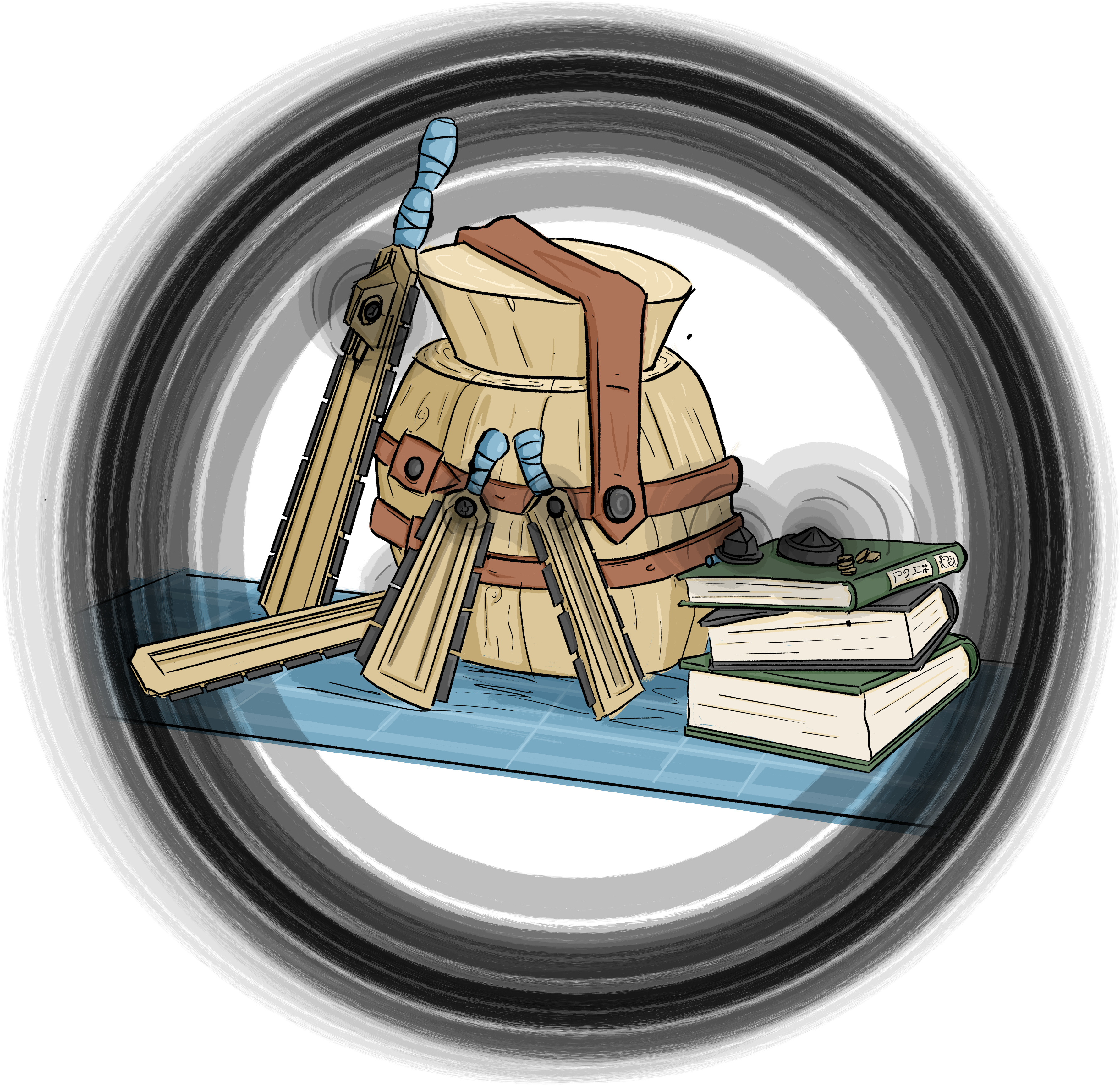 by Pouaseuille
As a sum up, one could say the Goodletter pact simply consists of yet another form of sapient and weapons trafficking. Yet, its overall stability and ties with the Great Library make it a much more worrying threat for merinian order than any small scale mafia could be. It is equipped with experimental enchanted weapons, and its official records are almost certainly hidden in the Library, where the City Watch cannot enter and almost noone could find them anyway. Dear journal,   As I am writing, I am hidden in what seems to be a large closet. I think I have seen something that I wasn't supposed to... I was looking around in the shallow parts library, trying to find some exit toward the surface. As I entered a region that seemed unexplored for quite a while, I heard some voices. I think I recognized one of them as the dean of a tribe, one of these biologists that work in the southern aisle of the library... Or maybe the director of that history-studying tribe in the upper north, what's it's name again? I just can't remember. As for the other voice, I'm certain I had never heard it before.   They were talking about odd things. They were talking about some merchandise that was not delivered. The unknown voice said something like:   "Look. We've already lost almost a dozen mercs for your explorations this year, pal. And now you're telling me you still can't deliver! We at the surface are getting disappointed, very disappointed indeed." Their voice sounded sad, but also threatening.   The other, the dean's voice, didn't seem afraid at all, on the contrary: "Listen here, kid", they said. "I know your bosses told you to look tough, and to try and get a better deal. By the spirits, maybe they even did tell you to threaten me like you know what's what! But I doubt it. I know your bosses, I've known them for years. My daughter married one of theirs not two years ago. I'm certain they will be very disappointed if they hear about the way you're talking to me."   The unknown voice answered, much less confidently: "Hey, chill out, pal! I'm sorry! I'm just doing my job, and you know how they are when they are angry..."   "Oh yes I know", the dean answered. "And to tell you the truth, this situation displeases me too. If your mercenaries hadn't panicked and got themselves killed by the tentacles last spring, we'd still be using them now. We'd probably be able to dig further, or even to fight monsters to get their gems: in any case, we'd have more gems for us and more weapon for you up there." The dean paused, and I tried to get closer and see them. "Look. Tell your bosses that - what was that?"   Obviously, I made some noise. I guess it's a law of nature that when you're eavesdropping, you have to get caught at the very moment when the conversation gets the most interesting...   In any case, I immediately ran away trying to find some place to hide. I found this large cupboard I'm in, and I think I'll just wait there for a bit: it's less of a cupboard and more of a forgotten hidden room, really: there's a chair, some old rotten cushions... I even found a bunch of candles that I could light up.
— Wakey's story, excerpt from a journal entry written the 2nd of Autumn 5547.

This was a really interesting take on the Alliance Challenge! I very much enjoyed reading through the article, and your world is just so unique and fascinating :)!

Thank you for your appreciation :)

Nice, I enjoyed the article!

Thank you! Do you have a challenge entry by any chance?

Yeah, I did create an article for the Alliance Challenge. Here's the link: The Confederacy of Acciphere 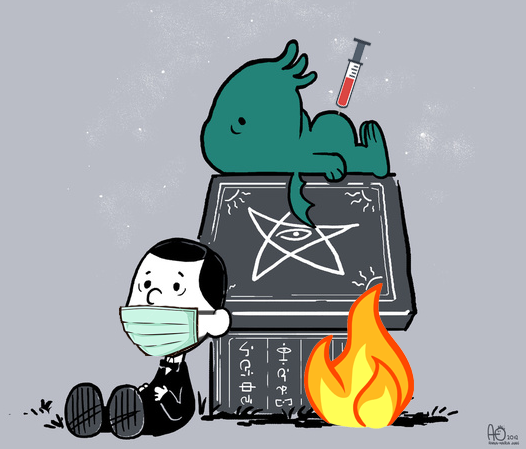 Remarkable, truly remarkable! The formatting is so clean and the content is perfectly designed! Very good read!

Wow thank you! Glad you liked that :)

This is such a wonderful article! The artwork and the quotes give it humour and life. It really makes me want to check out the rest of the world.