Ever wanted to become a jungle explorer without leaving your house? Our intern job is for you to take !
— Recruiting post from the Cartographic League, ca. 5,510 AR.


Saying that the Merinos Library is a strange place is an understatement. One of the reasons why no competition of the strangest structures there are in the Cylinder has ever been made, is the very existence of the library. The more one tries to think about it, to understand how it may work, the more offset they are.   Of the several things that could be told about it, one of the first may be that the Library is renowned in the world for storing the most extensive knowledge there is in, and possibly out of, the Cylinder. Its countless galleries, corridors, and rooms spread vastly above and underground, all of them filled with knowledge gathered in the millennia.
Alternative Names
Merinos Cartographic Library, the World's most clever mess
Type
Library
Parent Location
Merinos (City)
Owning Organization
Merinos Cartographic Guild
Characters in Location 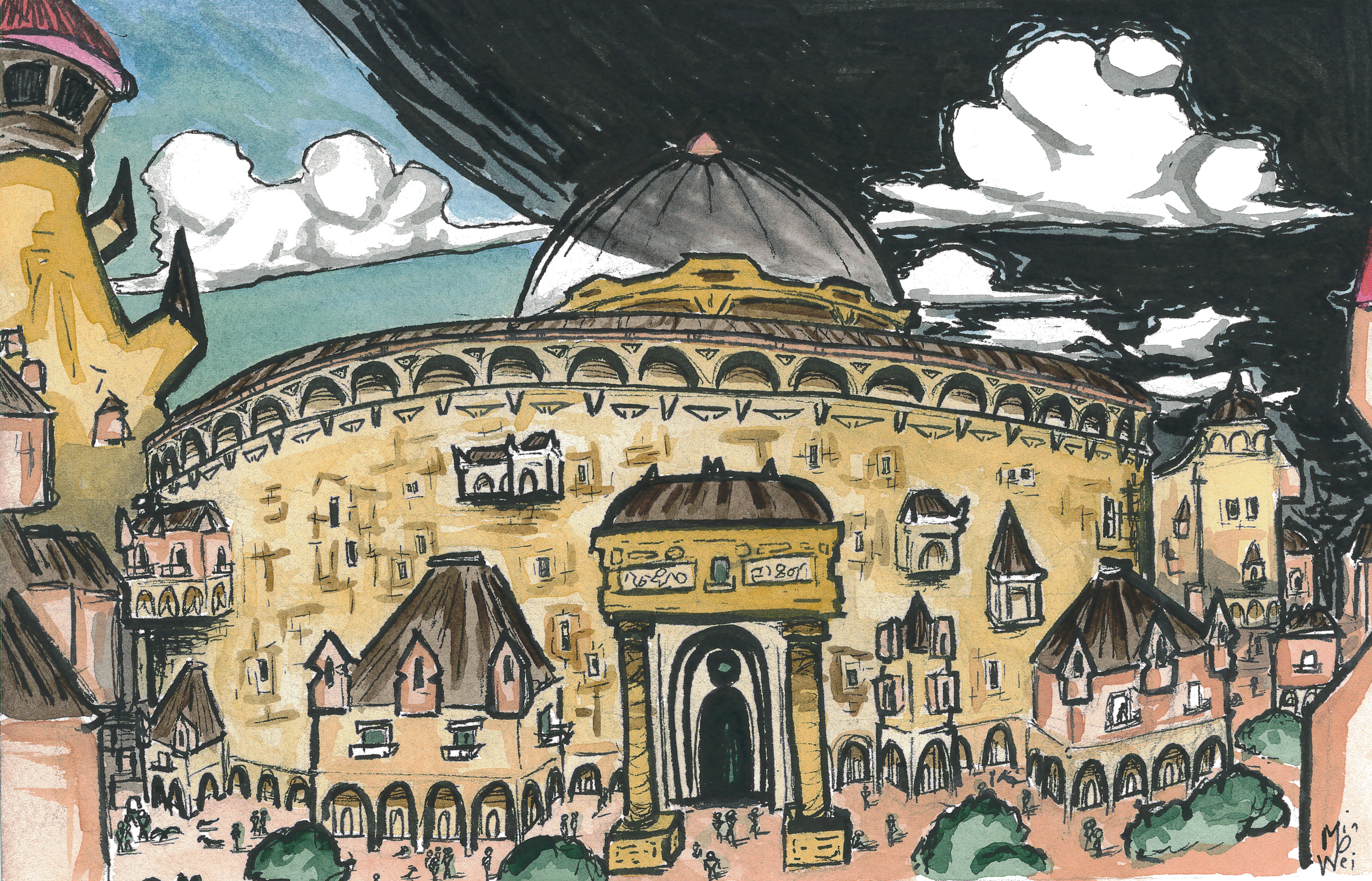 From the outside, the library looks like a city within the city, an antic fortress within the wall of Merinos. It consists in three gigantic circles, connected to one another. The largest one, more than six hundred meters in diameter, is more than a hundred meters tall. On the center of that circle is the great Light Dome, a glass dome illuminating the galleries and the seminar underneath it. Several large towers, each a hundred meters in height, sprout from all three circles.   In fact, the Library building is so vast that town houses are built on top of it. Small paved streets, marketplaces, and wooded squares can be found between the monumental buildings that are connected to the rest of the Library. Although these areas are not considered as a direct part of the library, they are vital for the well being of its inhabitants, as they represent a major source of food for the librarians, archivists, and explorers.       From the inside, the Library is even larger. The well-known, and controlled areas center around the Light Dome, which illuminates a large study room as well as several amphitheaters where lessons are given. University buildings surround the dome in several concentric circles, while large and well-lit galleries spread far from it, opening regularly to other corridors or laboratories.   However, the further one ventures from the main galleries, the darker, older, and more twisted the place get. Soon enough, the place is an intricate maze of intertwined galleries, where forgotten laboratories and study rooms act as camping sites or taverns for lost travellers. The galleries turn erratically, sometimes diving suddenly underground or showing an opening to dark and deep cliffs.   This complex and dangerous maze of ancient galleries spreads extremely deep under the library, and is thought to spread very wide around the Merinos underworld. It is home to a vast ecosystem of monsters, forgotten archivist tribes, lost families of students, and wandering spirits. What is more, the boundary between the physical world and the Spirit world are quite blurred, and it is thought that some entire kingdoms are hidden in some of these areas, long forgotten in the meanders of some ancient shelves, not really obeying the laws of the physical world, nor those of the spiritual one.

Stay with the olders at all times, lad : it would take anyone years before being able to find the privy without getting lost or mad.
— Unkown janitor giving a young student a tour of the quarters, ca. 5525 AR

It's been like that since the library and it's working, why would you bother changing it?
— Common Merinian expression, meaning "it's always been like that".

The origin of the Library has often been said to be synchronous to the legend of the Kunskaper, which is itself difficult to anchor in history. According to the oldest traces of settlement in the region that lead to the founding of Merinos , however, the Library would then necessarily be posterior to the 3,500s AR. What is more, the first document recently found talking about the story of the Kunskaper as a forgotten legend is dated from the 4,300s AR, which implies that the legend and the Library are both older than that.   However, several arguments have been raised in the recent decades, all of them pointing toward the possibility that the Library may be older than what was previously thought.   First of all, many of the documents in the structure have been dated to periods anterior to the 3,500s AR. While this could have been caused by the displacement of such documents from other, older libraries, the sheer number of documents makes this unlikely : entire collections, stored in gigantic and long forgotten galleries, have been dated from periods almost as old as the Recession itself (and, as such, are entirely undecipherable). What is more, visual documents such as the following one have been found to accurately describe the Library with a similar architecture as it has today. The following document has been dated from the 3,700s AR, and yet clearly represent the several large circles and conic towers of the library. It is yet unknown whether the other circles represented have since been destroyed, have never existed, or are still present and hidden underground. In any case, these documents interfere as well with the supposed date of 3,500 AR : even with the current technology, taking less than two hundred years to build such a colossal structure seems very unlikely, and it is even more so in the low population density and available technologies of the 3,500s.
So as to give back some credit to the "Kunskaper theory" that the Library is posterior to the 3,500s, one should mention that the Library is far from a solely human structure. Huge areas of the colossal place are almost exclusively inhabited by creatures such as Librarian spirits, Perrots and others, who play a great role in the constant alterations of the galleries. It is still possible to credit the influence of gods and Shadow Creatures for the speed at which the structure should have been built to possibly come from the 3,500s.   Yet, even while taking into account the probable influence of non-human creatures in the construction of the Library, the theory that it is older than what was first thought is getting popular amongst scholars. Given that possibility, two main schools of thoughts are opposed to one another : the first one believes that the legend of the Kunskaper itself is, in fact, much older than the first settlements in the delta. According to the second one, however, the legend in itself isn't older. The Kunskaper of the legend, in that case, did exist, but did not gather much knowledge themselves : they simply (re)discovered the Library, and started to excavate and translate some of the knowledge that was there. When they disappeared according to the legend, the Kunskaper simply lost themselves in the twisted galleries of the Library, or in the spirit world.   Although this last theory may seem far-fetched, it is actually backed by several aspects of the nature of the older parts of the library : some of these are perfectly well merged with the Underworld itself, and countless strange objects can be found there, on the edge between things that are still recognizable as some advanced technology, and magic. What is more, it is known that the Librarian Ghosts, when asked, always deny the fact that their people participated in the building of the library, even though they claim to have lived there for thousands of years.   In the end, several points can be made to show that the Library could very possibly have been first built by particularly ancient civilizations, which had access to powers that are almost unfathomable by our modern means. One certain thing remains, however. It is that the library has been constantly inhabited, altered, and modified over the last millennium, and only its outer shape, and largest structures, remain unchanged. 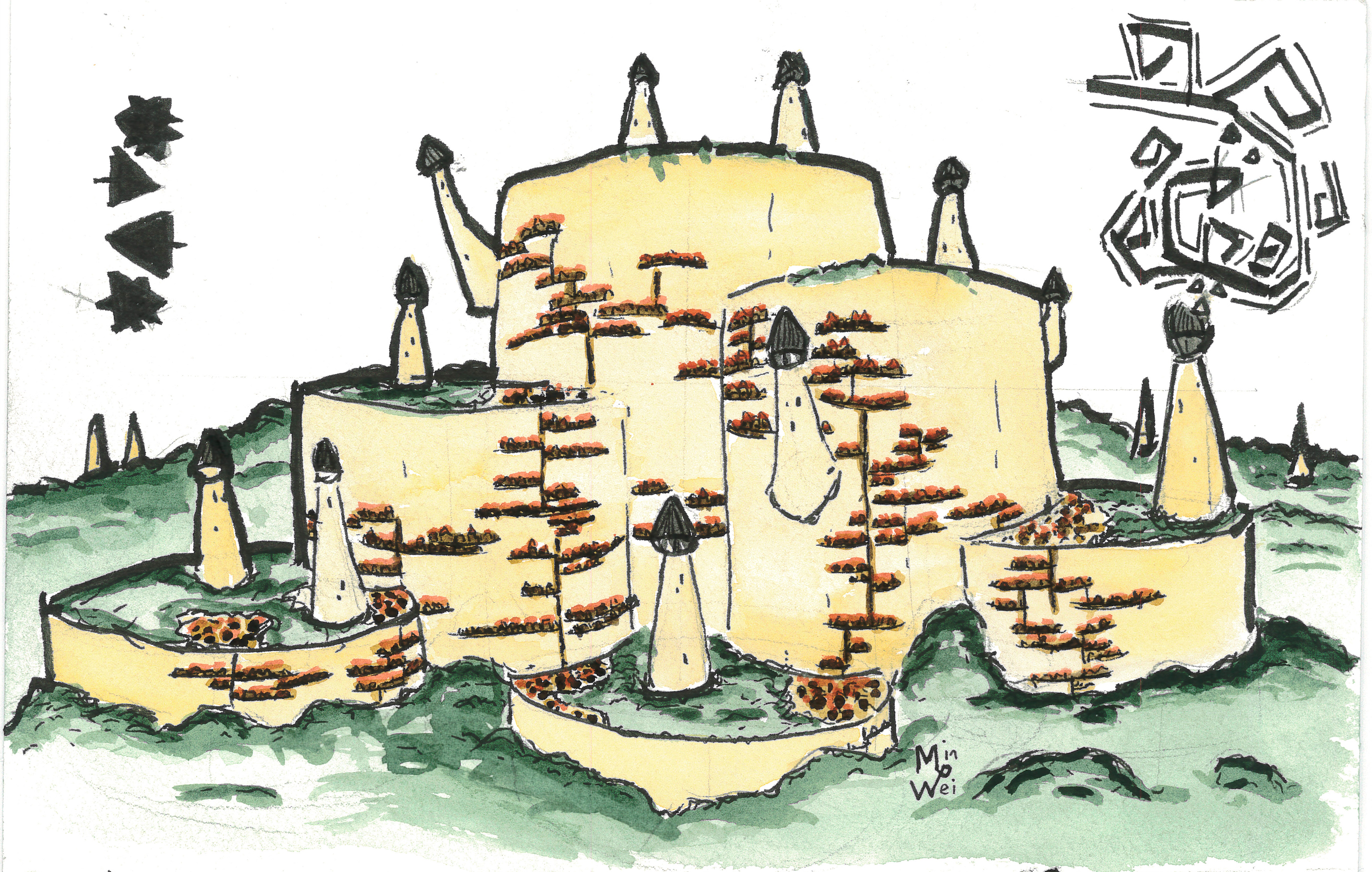 Don't trust what the scholars say. They say they got it all controlled, they say they know all what's in there. Truth is, they don't even have the slightest idea of the extent of their ignorance.
— Anaonymous, ca. 5470 AR.

Although one can often hear that the Merinos Cartographic Guild is owning and controlling the Library, that is actually quite a far-fetched overstatement. While the Guild does indeed own and maintain the Dome, the university buildings, and the main galleries spreading from the Dome and some of the large towers, it has little to no control on the rest of the structure. In other terms, the Guild actually controls a tiny fraction of the Library, a fraction so little it is simply irrelevent in terms of information compared to the rest of the Library.   It is known that several independant human and non-human tribes exist in the depths of the library. These peoples, focused on a spiritual level to the understanding of specific fields of science and philosophy, rarely interact with the Guild, and usually do so indirectly or by accident. It is known, as an example, that the Medical tribes, founded around the 5,100s by the Bookmarker family, are spread on an area that is roughly three times as wide as the Guild, and that is still a tribe mostly concentrated on the surface of the structure. It is very probable that some groups, living more deeply in the Library, or even mostly containing themselves in the spirit world, actually control much larger portions of the Library's knowledge.   The many beings that live in the Library compound are thought to have diverse means of sustenance. Of course, people living close to the surface are able to do groceries in the several marketplaces that are on top of the library, but that is impossible for the deeper folks. It has been seen that some tribes are able to grow crops, or raise cattle, in large and ancient rooms : similarly to the vegetation found in some areas, this is made possible by the strange and ancient sources of light that can be found in the most remote areas of the library. What is more, underground rivers pass through the structure, and are the cause for particularly wet regions. In such regions, large mushroom are able to grow, acting as a source of food or as a lightsource in the case of Light Plants, which allow to grow edible algae. Finally, some reports from deep tribes venturing in the deeper, stranger areas of the Library say that in some regions, possibly part of the Spiritual World, rooms are extremely wel-lit and wet without apparent sources of light, which allows for some very unnatural and yet edible plants to grow. However, none of the Guild have ever come close to witnessing these phenomena.
Merinos (City)

Blurred ages, during which very little is known about the library.

The period preceding thefoundation of the Cartographic Guild. While very much in use, the Library was poorly organized, and often shaken by violent conflicts between scholar faction.   During that period, school of thoughts were ideologies, and scientific controversies were frequently the source of military conflicts.

The modern period, during which the external structure of the Library is claimed to be owned by the Merinos Cartographic Guild.