Looking for a book ?

Location
Merinos Great Library
Authors
The following document was found lying in a small previously unaccounted for study room of the Library, close to the deep and old Western Medical Galleries. It appears to be some journal, and it traces the story of an expedition led in an ancient gallery starting from the study room. The hypothetical gallery, however, was not found, and was quite possibly obstructed.   The document has been handwritten, in a language corresponding to a medical script dialect of the Sciencetongue mainly in use from 5200 to 5400 A.R. After further comparison with medical texts from that period, the document might have been written by Merry Bookmarker, a former chair of a medical librarian tribe, that was unheard of since the 5370s A.R.   The reader is kindly reminded that although the text was translated as accurately as possible, tribal versions of Sciencetongue are highly variable, and some approximations were used.   The text goes as follows : 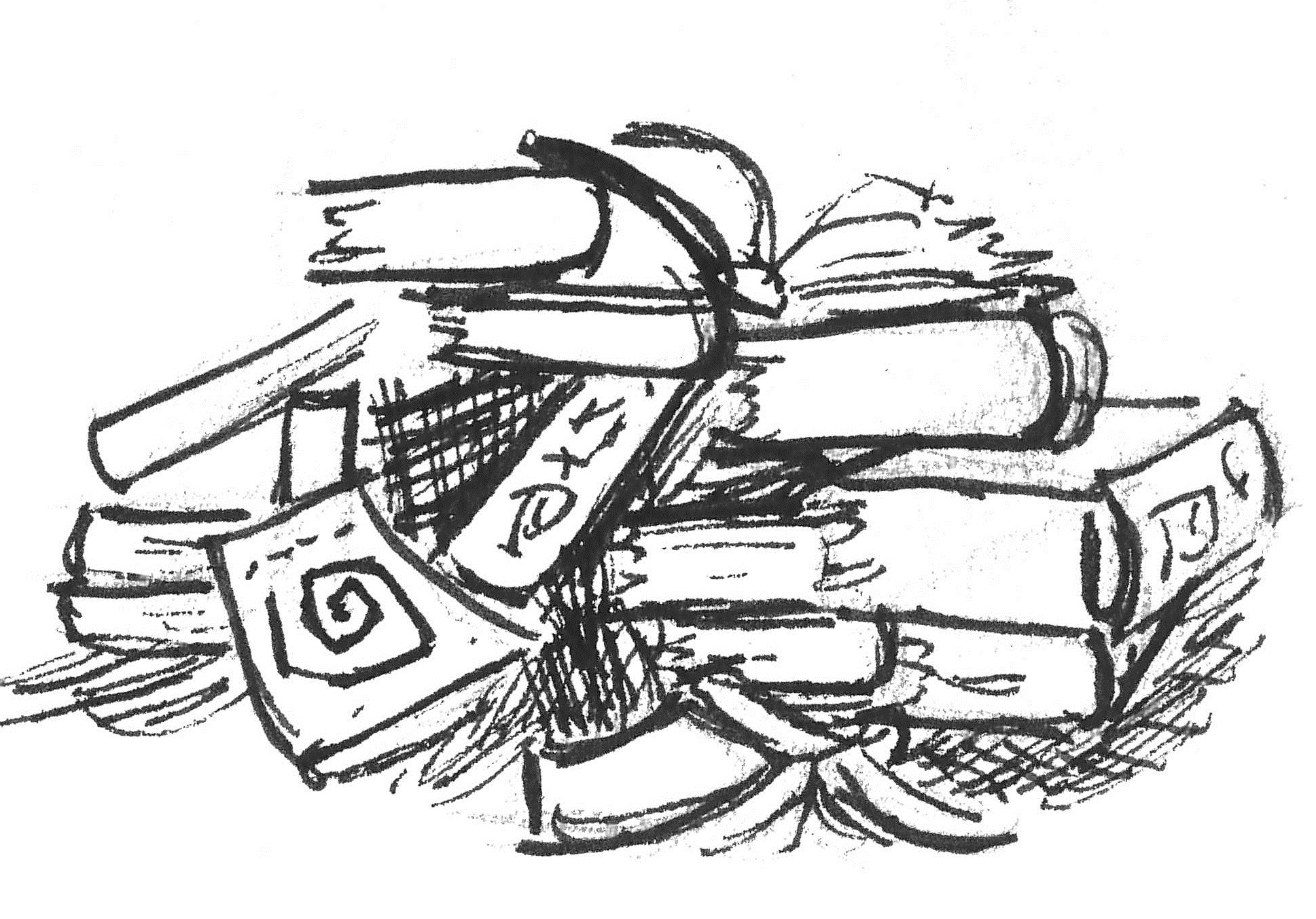 by Pouaseuille
As soon as I was informed of the discovery of this new path, I took the expedition in charge. I am almost ashamed to confess how excited I am: the very prospect of discovering ancient codices, untouched for gods know how many centuries, is filling me with more energy than I even remember I could have. The first expedition into the path is composed of twelve good ᛒᚩᚱᚢᚳᚱᚫᚹᛖᚴ, in addition to myself. The resources brought with us, including water and food supplies, are sufficient for three full days of exploration, after which we will have to be back.   I am presently writing this note whilst facing the entrance to the gallery. One plank of the ancient flooring in the Medical Gallery has been removed, leaving enough space for one to get through. The darkness emerging from the gaping hole is chilling me to the bone, while also dragging me in. One can only wonder what kind of danger and knowledge may be lurking in the depths...   Ah. The rest of the expedition team is finishing to get ready, we should get moving soon enough.
The expedition is ongoing. Reaching solid floor in the gallery proved harder than what we first thought. The profound darkness of the gallery seems to fight against our torches, and we had to re-light one several times over our twelve meters rope descent.   After our descent, ᛒᚱᚪᚹᚢᚴ landed first on a rotten wooden flooring, promptly joined by the rest of us. The floor is sloped, leading us even deeper in the forsaken entrails of the library. Our light seems to be unable to penetrate deep inside the room, as if the surrounding obscurity had a mind of its own and was convincing our torches not to trespass on its boundaries. Given that seemingly increased use of lanterns, I fear we may not get as far in the gallery as we first hoped.   While I am taking notes, the rest of the team is moving around. The walls seem to be just as sloped as the floorings, as if the whole room had been tilted over the course of some enormous landslide. After a detailed inspection, our historians think that the area may very well be an old study room, in the fashion of the ones that were created in some of the older days of the library. The broken pieces of furnitures, and specific decorations of the bookshelves, indicate that the room may date from as far as the 4000s AR, more than a thousand years ago.   Looking in the details was also the occasion to see what exactly we were stepping on: what we first thought of as some old, crumbling wooden flooring is much more interesting. Hundreds, if not thousands, of old books cover the floor of the room. Although they are tightly held together by several layers of cemented dust, our miner ᚾᛖᛖᚱᛡᚦ thinks they can be extracted without losing much information. 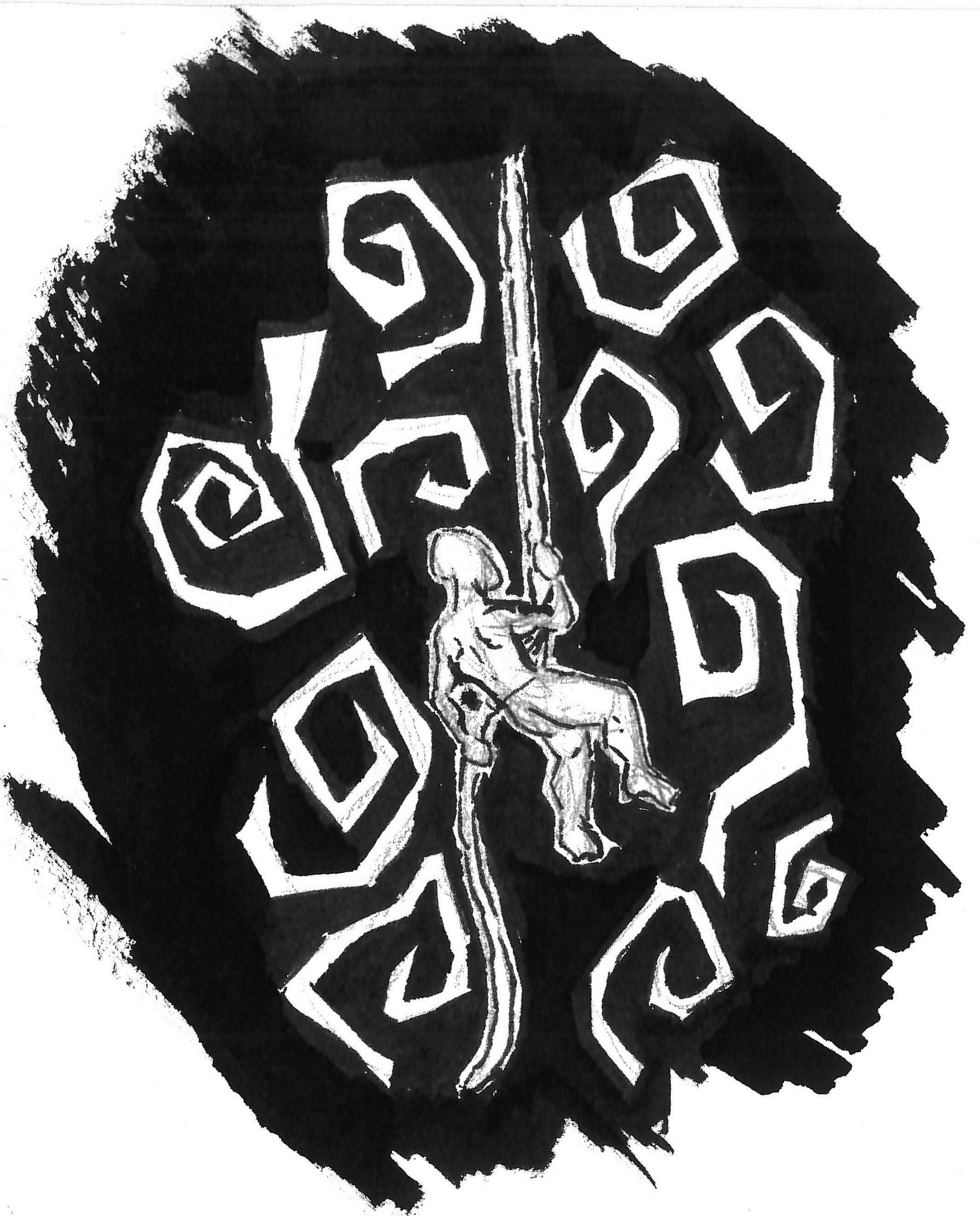 
A large patch of paper here appears completely darkened. When it was recovered, the journal was held open from here. Experts think that the overall humidity of the place, or the decaying of the body, was what led to the loss of information. The text becomes decipherable later, although several paragraphs have been lost.

After a few minutes of debating, it is decided that I, ᛄᚩᚻ and ᚾᛡᛚᚦ will be scouting the new gallery. We took a few of the remaining torches, a weapon, and got through the tiny, dark hole between the columns. In the meantime, the others are expected to light up more efficiently the room, and to either secure our trip back up or find some edible food in the abandonned room, whith seems unlikely. We are about to move.

From this point, the written line starts to get thinner, and shakier. The text, while decipherable, slowly loses its coherence. It is thought that the narrator, whoever they were, slowly got maddened by their surroundings. 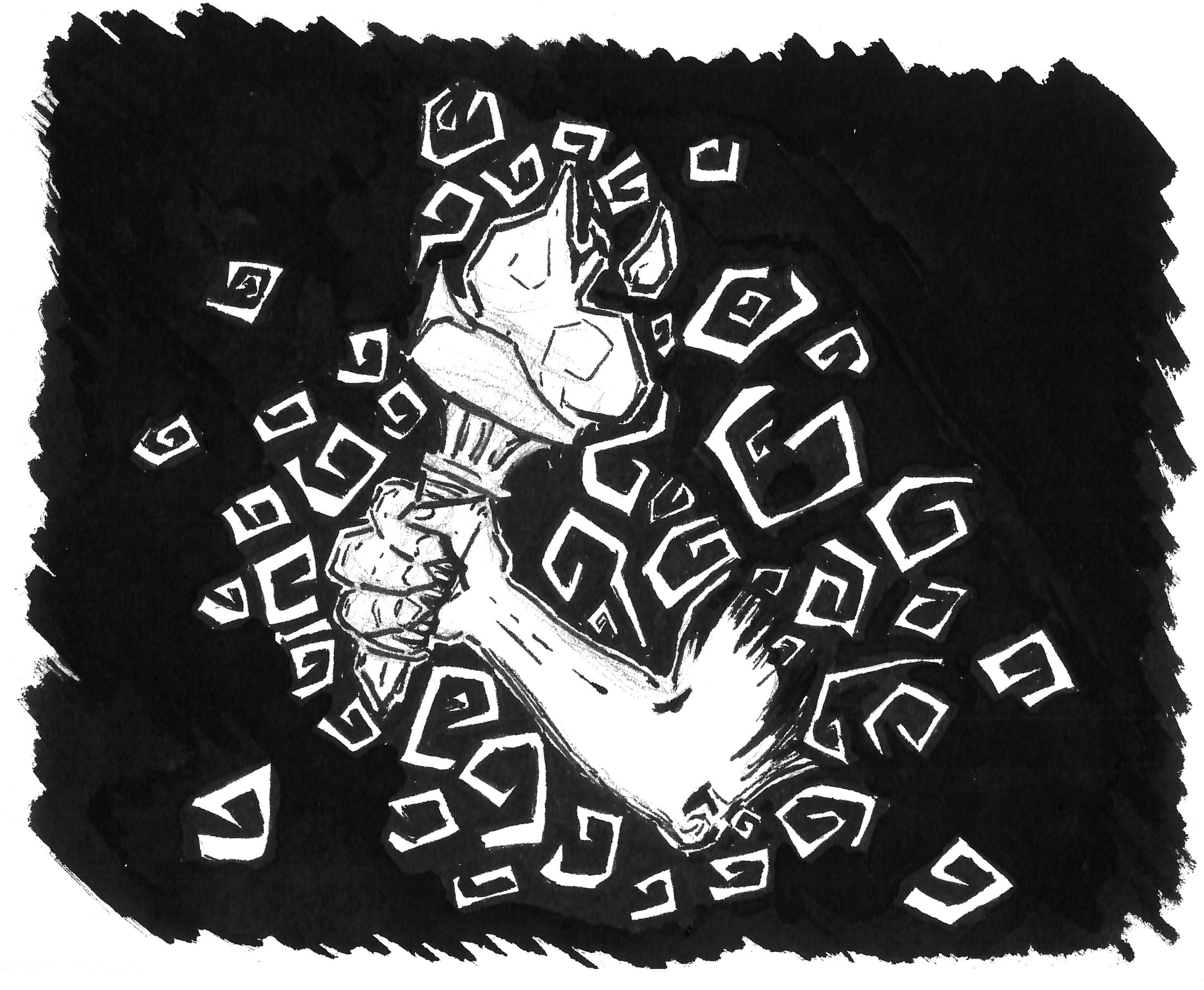 by Pouaseuille
After a few meters in that new gallery, we felt that the ceiling started to rise again. Soon enough, we didn't need to be crouching anymore. I'm writing while walking. As for the light, as absurd as it sounds, I feel like the darkness of this new gallery is even stronger than in the previous room. Our torch cannot even light up both walls of the gallery at once, and we are forced to sidle close to one series of bookshelves to watch our steps. What is more, the depth of the gallery feel almost... Taunting me. Like something of great interest is there, just beneath the black veil, waving at us as we pass it. I am trying to get my eyes used to the darkness, so that I can see where we are going and catch whatever precious information we may find there.
Still getting further. My eyes are not getting used to the darkness. On the contrary, it feels like the darkness is winning against our torches: ᛄᚩᚻ is holding one at an arm's length, and their shoulders are already dipped in a black veil.   I can't help but look in the dark, as far as I can. I feel watched.
The walls are getting further away from each other. The lights don't work anymore, we are surrounded by a black ocean. I'm not even sure that I am writing on my paper, or that my text is readable.   ᛚᛟᛋᛏ᛫ᛁᛋ᛫ᚦᛖ᛫ᚹᚨᛃ   As we fumble through our way, it appears to us that we are reaching a new room. ᚾᛡᛚᚦ is trying to light up a new torch. It doesn't work? It doesn't work. We agree on finding some walls. I do not really understand why I am still writing while walking. The room is large, and we cannot find any wall. We realize that we don't know where we came from either. The ceiling low. My head keeps bumping onto old bookshelves or stalagmites, can't really tell. ᛃᛟᚢᚱ᛫ᛗᛁᚾᛞ᛫ᚹᛁᛚᛚ᛫ᛒᚢᚱᚾ
I heard a large cracking sound, and we got separated. I am in the dark. Alone. I don't like this, I want to be home and have some tea. I am looking for an exit.


The text appears to be more and more parasited with empty spirals : small spirals that do not hold any word, drawn shakily among the rest.

Thirsty. ᛞᚱᛁᛜᚲ᛫ᚦᛖ᛫ᛞᚢᛋᛏ᛫ᛁᚾ᛫ᛃᛟᚢᚱ᛫ᚹᛇᚾᛋ   I thought I found some walls. ᛃᛟᛁᚾ᛫ᚦᛖ᛫ᛋᛈᛁᚱᛁᛏᛋ But they are soft and warm and hairy, like human flesh. Then I thought it was ᛄᚩᚻ. But it can't be. I lost them before, I remember that. ᛏᛁᛗᛖ᛫ᛏᛟ᛫ᚠᛠᚱ Also they couldn't be a wall, they were smaller than me. ᛠᛏ᛫ᛁᛏ᛫ᚠᛟᚱ᛫ᛁᛏ᛫ᛁᛋ᛫ᛗᛃ᛫ᚠᛚᛖᛋᚺ   ᚺᛟᚹᛖᚹᛖᚱ᛫ᛃᛟᚢ᛫ᛚᛟᛟᚲ᛫ᚨᛏ᛫ᚦᛖᛗ᛬ᚦᛖ᛫ᛖᛚᛞ᛫ᚷᛟᛞᛋ᛫ᚹᛁᛚᛚ᛫ᛚᛟᛟᚲ᛫ᚦᚱᛟᚢᚷᚺ᛫ᛃᛟᚢ
I got away from the wall. Maybe I can dig through the floor to get at the top? ᛖᛋᚲᚨᛈᛖ   Tried. Doesn't work. ᛞᚨᚱᚲᚾᛖᛋᛋ᛫ᚲᛟᛗᛖᛋ The floor is not on the top, it is at the bottom. ᚦᛟᚢ᛫ᚨᚱᛏ᛫ᛚᛟᛋᛏ   ᚦᛖ᛫ᛈᚨᚦ᛫ᛁᛋ᛫ᚷᚨᛜᛜ Lost.
Can't ᛏell time. It iᛋ so dark.   ᛋᛈᛁᚱᛁᛏᛋ᛫ᚲᛟᛗᛖ᛫ᚠᛟᚱ᛫ᚦᛟᚢ   Big noiᛋe !
Scared.   Running. Can't ᚹrit 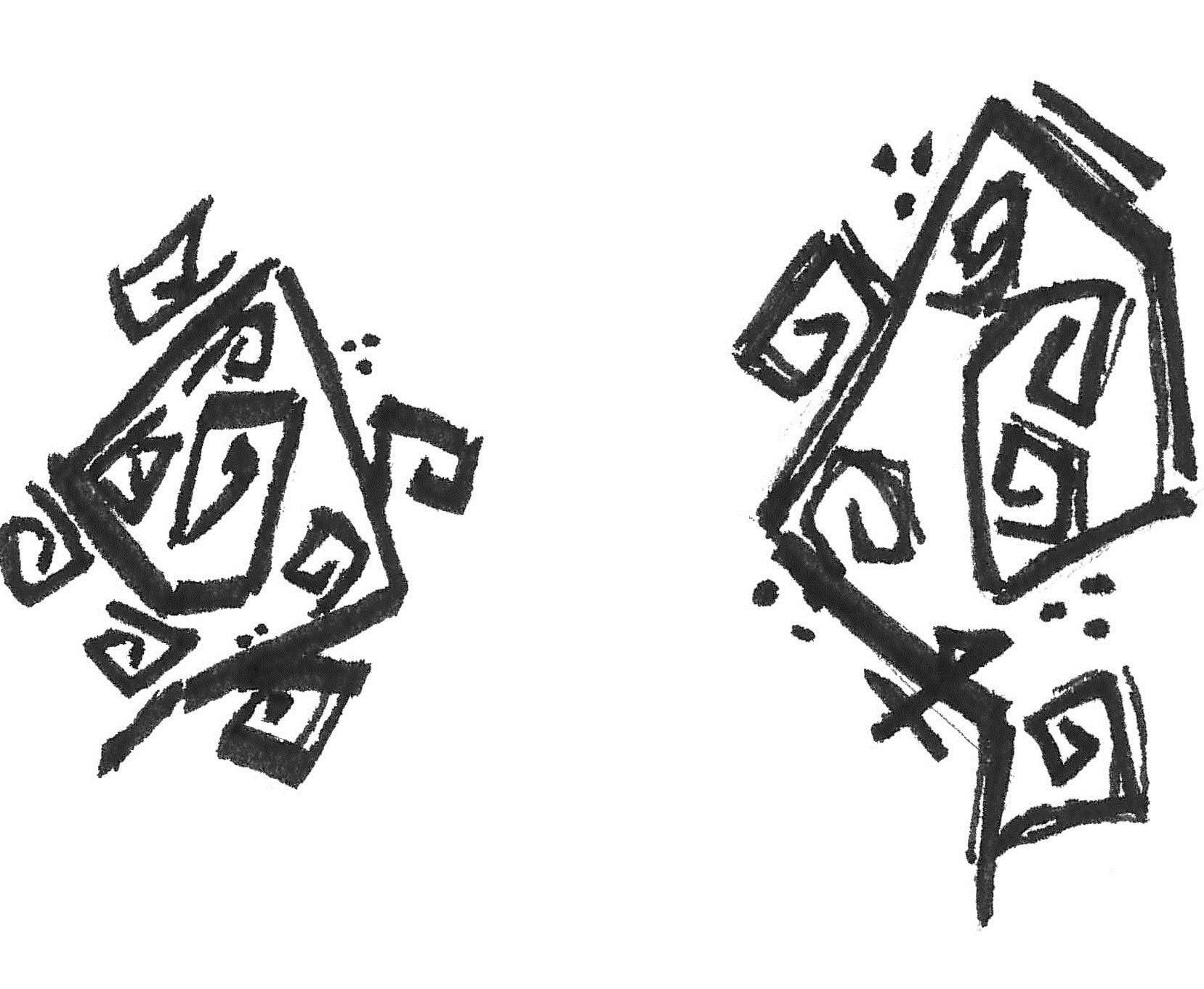 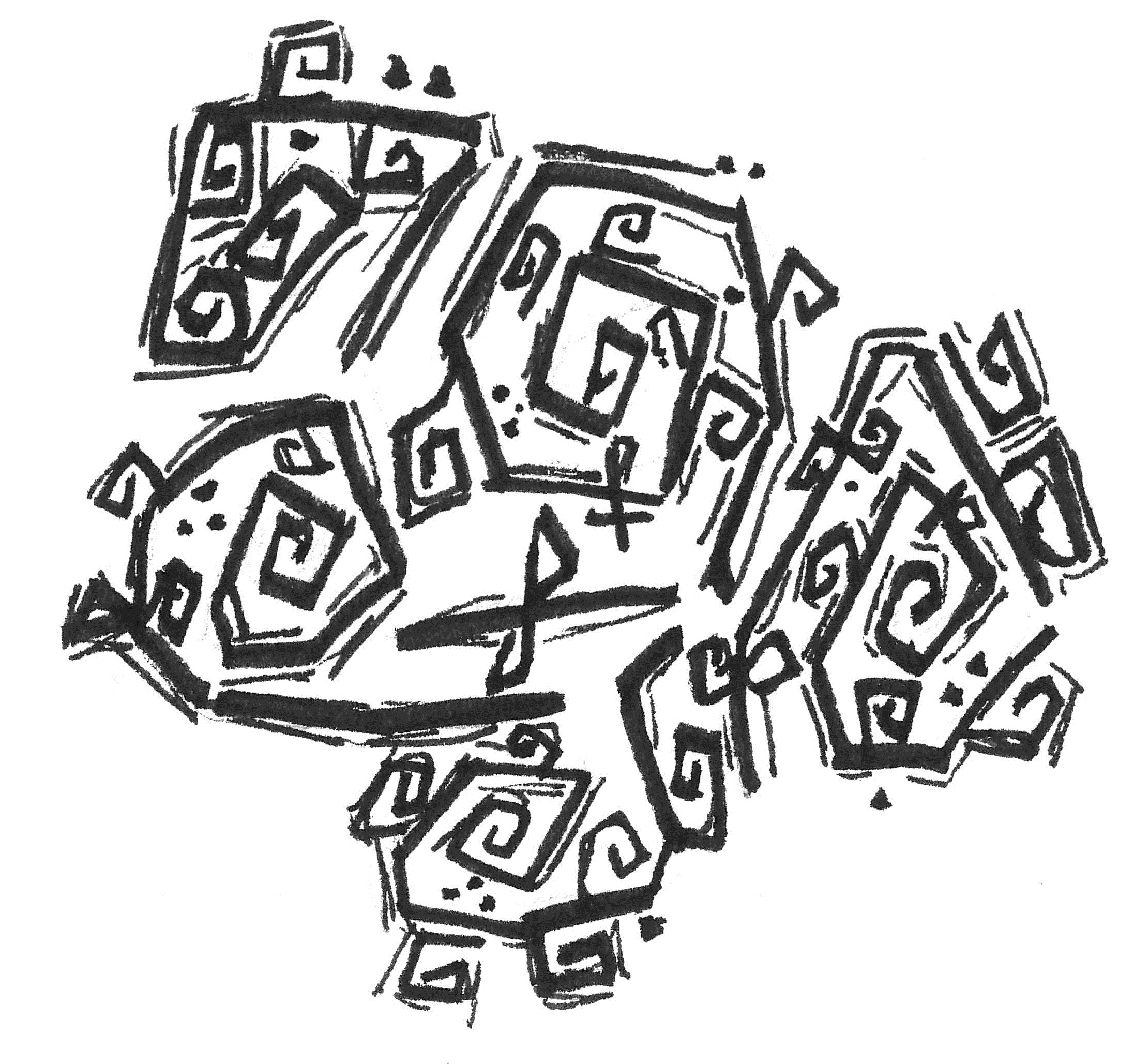 
The document was found held by a dessicated corpse, in a small gallery parallel from the Deep Medical Libraries, dark and hidden from view. It is thought that said gallery may be linked to the one that was visited by the author, while the rest of the expedition set camp in the library. Given the orientation of the body, it is unknown whether the three members were unknowingly trapped in the spirit world soon into their whereabouts, or slowly taken over by a spiritual entity over the gallery, and that the author died while trying to flee from the entity's influence.   At the moment, the fate of the rest of the expedition, as well as the nature of the rooms described, are unknown.
Stories, Arcs, Characters

I really loved this article! The use of runes was especially cool and very chilling to read what they said as well. Not sure if it's on purpose, but there's an e instead of ᛗ in the last white box :D   Great work!!

Thanks a lot ! Glad to hear someone took the time to translate the runes :)   That last e was kind of on purpose, to show a transition/confusion between the use of different languages; looking back, though, I'm probably going to change it into the rune.

Oh... that makes sense, I just didn't realise :D   And I actually know the elder futhark runes by heart (someone taught it to me like 5 years ago and it just STICKS for some reason XD) and I was so excited when I saw you had used them!!! ^-^

Hi, love! We Enchanters would absolutely love to feature this article in one of our community's daily features! Unfortunately it appears you've neglected to credit some of your artists.   If you could, we'd love to have you credit them! And if / when you've corrected this issue, please respond to this comment to let us know- that way we can show your article off to the lovely users in our community   For more information about our feature requirements, please see our codex entry:

Hello ! Thank you for your comment. I am the exclusive artist of every drawing in this world, which main purpose is to be illustrated by my drawings and watercolours. :)   Nevertheless, I just linked the artworks used in that article to my instagram webpage, and will do the same for all the images that miss such a credit in the rest of my world.

We understand ^_^ We still require users to self credit now, however, in the event of a feature! We appreciate you taking the time- and I'll update your case in the Enchanter logs!

Thank you :) I'll be careful to self-credit from now on, in that case !