The merchant clans of Lyx, connected by a common identity and an ideal of fair trade.

"Matrica" is the true given name of the otter race, though is almost unheard of in this context, with the race preferring to refer to themselves by individual clan. In common usage, the term "Matrica" applies to the culture as a whole, which includes members from a wide variety of racial backgrounds.

The Spokes focus primarily on old technology; machinery that focuses on moving parts as opposed to computerised functions. They command one of the largest armadas of working vehicles on Lyx, albeit patchwork and lacking in uniformity. Motorcycles, cars, trucks, motorboats, and a sparing handful of flying craft, all carefully maintained by the clan. They guard the knowledge of their construction, maintainance, and repair with passion, though they haven't been seen to move against any individual who acquired similar knowledge from other sources.

Their primary industry lies in finding old machines, discerning their proper use, then repairing them to either use, or trade. The cannery of Hub, owned by the Walls clan, was originally brought up to function - and is still maintained - by the Spokes.

The youngest of the trader clans at only two generations old, the Vines own, maintain, and live inside of massive greenhouses that were the result of joint effort by the other clans. The completion of these greenhouses is considered the true founding of the Vines.

Their primary industry is plants and plant products; the Vines' greenhouses produce industrial quantities of vegetables, fiber stock, and medicinal herbs. The clan also manages several small labratories inside their greenhouses that focus on increasing crop yields, or improving the quality of their produce. 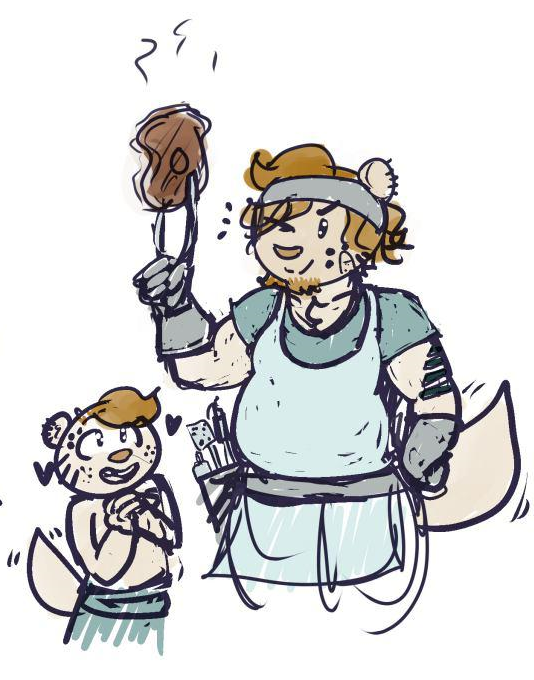 Known more colloquially as the Guts, the Walls are focused primarily on infrastructure. While the other clans have a near monopoly on a specific area of trade, the Walls focus on setting up stable and long-term outposts and trade routes, making most of their earnings through their maintainance and administration. Spokes may own the trucks in a caravan, but it's the Walls who plan the route and own the outposts along it. Vines may produce all the food for their outpost, but it's the Walls who arrange its distribution. An expedition may find a haul that the Glass would pay well for, and it's the Walls who serve as the middle men to ensure neither side of the deal is unfair. They take this administrative strain off of the other clans, allowing them their focus and specialisation.

The Walls' primary settlement is known as the Hub, built around a cannery that imports metals and fresh food, and exports canned foods. This earned the clan the nickname of the "Gut Fillers," which was eventually contracted to their unofficial clan name, the Guts.

Not really a clan in the true sense, but made up of members from all of the others, the Caravaneers are the lifeblood of the Matrica. They move convoys of supplies, materials, trade goods, and even supercargo between settlements and outposts, and are often the sole means of safe transport between these places. They all unofficially operate out of the Hub, though some caravans will never see the place more than once a year.

Each individual applies or commissions the application of tattoos upon coming of age, with designs based on their clan of origin. While there is no strict system in place for these designs, they're required to at least give the right impression; the Glass prefer the jagged lines of broken glass on joints or around their necks, the Vines prefer twisting plants around entire limbs, et cetera. One may also show the tattoos of their parents' clans, or a clan they married into. A false tattoo is prohibited, especially one worn by someone who isn't Matrica, though clans do permit them for honoured friends.

The Hub is the unofficial Matrica capitol, with nearly every trade circuit passing through the settlement at least once a year. Sitting at the heart of Inru (or the Industrial Ruins), it began as an old cannery that was still in near working order. It took the Spokes clan very little time to get it up and running again, after which they left it in the care of the Walls, who began importing materials and food in numbers that had the other clans in shock. Once the Walls then began to export preserved and canned foods back out of the site, the rest of the Matrica realised the wisdom of the Walls' actions. Over time a market settlement grew around it.

Though many miles apart from one another, the three major greenhouse complexes of the Vines consider themselves to be a single entity. Each complex houses somewhere over two hundred individuals - mostly Matrica, but some others - along with the expected plant life. They are never static, with entire sections being refitted regularly and the crops within being rotated to prevent exhausting the soil. At least one new greenhouse chamber is added every year, leading to slow but steady growth.

The primary settlement of the Spokes, Runway is a former airplane graveyard that has had its wrecks turned into structures for some four hundred permanent residents. In spite of the name, there is no actual runway in the settlement.

53 years ago, the Matrica clans, headed by the Walls, began the Eden Project; plans to build a series of industrial-sized greenhouses, meant to help feed their people. Six sites were originally planned, codenamed Blue, Green, Pink, Red, White, and Yellow. Pink and Yellow were found to be non-viable for a variety of reasons, and were dropped before any building could begin.

The four remaining sites were levelled and built upon over the course of three years, leading to four large greenhouse complexes, each sized to accomodate a live-in population of several hundred, plus enough crops to support several times that number. Each clan who contributed to the project gave a small number of their members to work the greenhouses, the new combined population becoming the Vines clan. Eden Green, unfortunately, found its soil exhausted in very short order, and was abandoned after only eight years; its population moving on to the other sites. The three that remain - Eden Blue, Eden Red, and Eden White - are still holding strong today, and providing food for the entirety of the Matrica clans, plus enough surplus for trade.

The End of the Shrapnel

There is a now-defunct clan known as the Shrapnel, whose primary industries and trade goods were weapons; guns, ammunition, and explosives, in bulk quantities. 6 years ago, an event known as the Highway 15 Massacre took place, which resulted in the deaths of eighty-seven people and wounded over a hundred others. It was discovered that the party responsible had acquired their munitions from the Shrapnel, and the Highway 15 survivors demanded retribution from the clan.

Eight months later, after both legal protests and violent riots, the Matrica signed a binding writ that disbanded the Shrapnel and absorbed their members into other clans. The writ declared that, while weapons production for personal use, and the trade of weapons and ammunition on the small scale were still legal, the Matrica would no longer take part in the large-scale arms trade.

Shortly after, a conclave of clan leaders made a public announcement, in which they admitted to shared guilt for the Highway 15 Massacre. In their words, while the bulk of their people did not make or trade the weapons, nor did they do anything to prevent it, and so share the guilt as a people. They added that those who were previously of the Shrapnel clan were not to be persecuted.

Due to the divercity of backgrounds that make up the Matrica, almost every faith on Lyx is represented in their numbers to some degree. However, the primary faith of the culture is the Philosophy of Light, with almost a full third of the population following it to some degree.

The Matrica, for the most part, view marrage as something more secular than spiritual, and their traditions are separate from any religious background. They are a polyamarous culture, though some couples remain monogamous, while some have been known to have as many as a dozen husbands and/or wives.

Traditionally, one proposes to their intended in the form of a purchase or trade. One offers a gift that they consider to be a price worthy of purchasing their desired spouse; this is rarely actually money, which is seen as gauche or insulting. Outsiders tend to view this tradition with some trepedation, comparing it to buying a slave. Making this comparison out loud is one of the surest ways to offend a Matrica.

Matrica refer to their spouses' spouses as second-husbands or second-wives. There may or may not be a platonic or familial relationship between second-spouses, depending on the individuals involved.