Monsieur, I have nothing against you, and I do not wish to harm you. Please wear the handcuffs so we can be on our way, the authorities are eagerly waiting your arrival and my pouch feels awfully light today.

Fast, strong and cunning, Garbriel is lethal with a blade, though his words can cut so much deeper. He will work for anyone that fits his moral compass, as long as the pay is good and the contract was issued by the Seven Swords Brotherhood .

Gabriel has found himself in the new world ,and really far from the familiar streets of his home city of Thebes due to some unfortunate circumstance, involving a fair lady, her father and her maid.

But the Guild of the Seven Swords has a chapter house almost everywhere. The new port towns of the Nyrian Archipelago being no exception to that. Gabriel has an impeccable record of successes in his past and the Guild will gladly give him any assignment he chooses to take on.

Gabriel has trained with some of the greatest swordsmen in empire, his ability to solve a case does not rely on his reflexes and beautiful stance. Gabriel is an excellent investigator, he knows whom to ask and about what in order to achieve his goals. The Guild and its informants have a wealth of local know-how on the where, when, what, and whom, and in exchange for a hefty cut the local guild master will happy to share the information that Gabriel needs, it's just a matter of putting the clues together.

Gabriel tends to spend a good amount of time taking care of himself. He enjoys running and lifting weights and spends as much time as he can in the local fencing school training and making contacts. He is fit and agile with a good sense of balance that he is trying to nurture further.

Gabriel is the proud owner of a long scar extending from the lower left of his neck down his right nipple, courtesy of the father of the girl he deflowered just before he had to escape Thebes. He often finds himself looking at it the mirror, reminding himself how close he came into becoming a footnote of history, and what got him there.

Gabriel dislikes bright lights, and when under bright light he often squints and gets an itch of his nose. His close friends make fun of him for that. He recently acquired stained glass spectacles that his madly in love with.

Gabriel was born in the streets of Thebes, the metropolis of the empire. He spent most of his childhood running around the streets with his little gang of misfits causing trouble and exploring places he should not be in.

His father, Legrand, a doctor by trade, spent most of his time travelling around the small villages in the vicinity of the metropolis aiding the poor and less fortunate and although he deeply cared about Gabriel, he never really had the time to be there for him. His mother Celia, a seamstress for the ladies of the high court offered Gabriel a warm embrace and taught him of kindness and manners.

His parents might not have been rich, but a combination of some savings, an intelligent brain and the kindness of one of his father's benefactors, landed Gabriel a place to the Lyceum d'Azenfin where he learned the finer arts of diplomacy, history and fencing. His aptitude for fencing gave him a position in the school's widely known fencing team, which in term, attracted the attention of Dame Julienne de Loubois, who took the young boy of 15 as her protege and love. For the next 3 years, Gabriel was groomed, educated and enjoyed a high life of debauchery in the company of the Dame and her friends. At the age of 18, Gabriel graduated the Lyceum and after a shining introduction by Dame Julienne, he was accepted as a junior agent for the Imperial intelligence service.

As an agent for service, Gabriel became the eyes and ears of the palace in the circles he frequented, creating an intricate network of contacts, the most important of them to him, John Cutts, the Guild-master for the Seven Swords Guild in Thebes. John and Gabriel became good friends and by helping each other, they soon gained a strong footing in the intelligence community in the city of Thees.

His seemingly rising career came to an abrupt stop, when he was caught In flagrante delicto with the daughter of the Master of Treasury of the imperial palace and her maid by her father. With Gabriel's life in imminent danger, John managed to smuggle Gabriel out of Thebes and into an Airship bound for the Nyrian Archipelago.

Gabriel presents by all means as a devilsh, handsome and devious man, but never forgot where he came from. The kindness of his father and the manners of his mother never left him. As such his moral compass is somewhat, unique.One the one hand he beieves that all people deserve a chance, and that those that cannot fend for themselves should be protected. On the other hand, he will do anything in his power to accumulate wealth and to find creative ways to spend it in order to enhance his collection of experiences. He is addicted to solving riddles and most certainly sex, which puts him in a lot of trouble, quite often. He does not have any particular inkling towards the divine, but he strongly believes in himself and his friends. His relationship with John instilled him with a strong sense of friendship and will do what he can to take care of those who are kind to him. 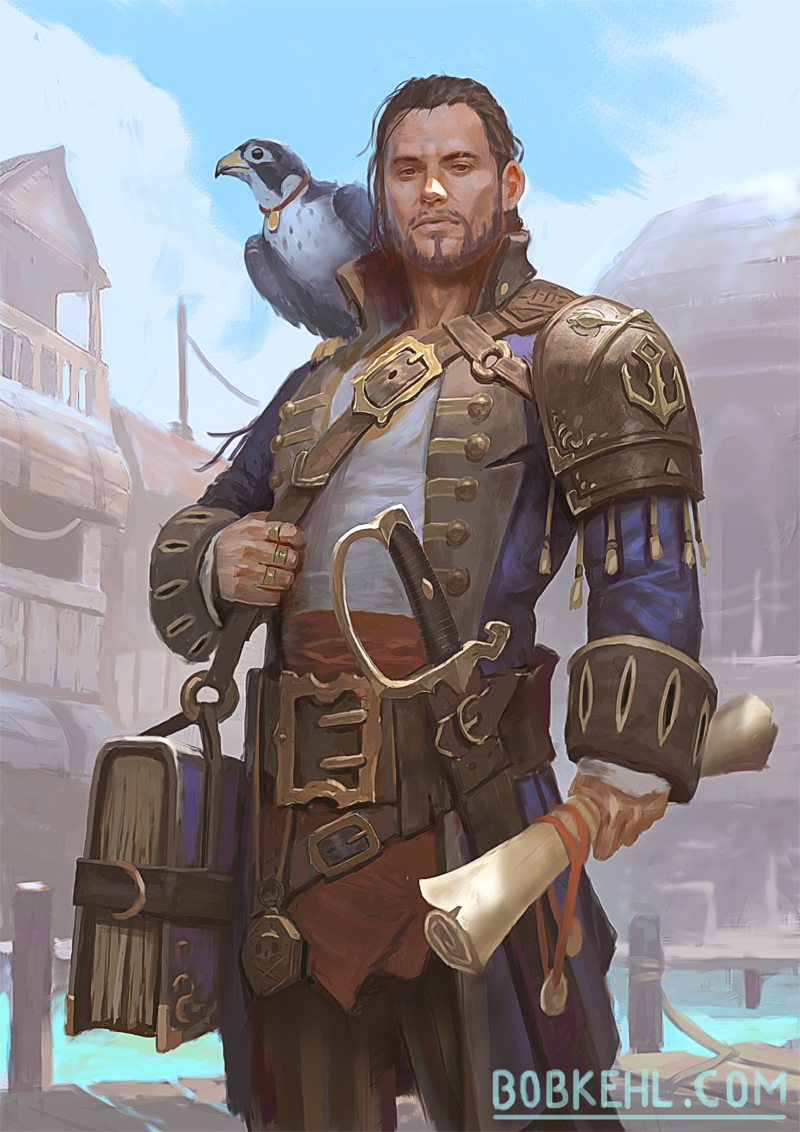 A scoundral and swords-man to match all the flying ships :D Welcome to WE with the first article, Dimi!   Given past events, it's a little surprising that he's still taking contracts for the Seven Swords! Do most guildhouses in the new world not know what he did? Is it all secret? Are there people going after him for what he did? :O   Great stuff and happy to see you writing again Dimi :D

The guild cares little about what his dealings are with the empire, as long as he keeps on completing contracts they get their cut, but he indeed also changed his name and he is being hunted down, well there is a bounty, so someone is bound to track him :)

An interesting character. I guess it would be good to have him as a friend (or at least better than as an enemy)?

Light sensitivity, I appreciate that, that is a very real touch for someone who fights often that oft gets overlooked. To me as someone who has been concussed, that suggests he has taken his fair share of blows to his head in one way or another, fists, a beer bottle, whatever it may be, and at least one of them caused him an undiagnosed concussion and he now lives with this odd tick (light sensitivity) from it for the rest of his life. I may be reading to deep into things, but as someone who has taken part in plenty of physically aggressive competition in both sport and sparring (hockey and some HEMA) even if you are careful, this is a thing that will happen. And in a fantasy setting you ARE trying to hurt/kill the other guy so being exceedingly careful not to goes out the window.   I love the character overall, and the story, but that little nugget I feel is fluff to most, and may be under appreciated, but to me it adds impressive depth to a character of this nature to have them have an odd tick like that which can suggest injuries or traumas that don't leave visible physical scars. Very realistic for someone in the profession of arms.

Well, he sounds like an interesting character. The kind that would make witty remarks on the guy he's dueling on an airship. Although, I love how polite he is when asking people to surrender

Nice complete article! Makes me curious about his future adventures.

Well, he is a pregen so ... it's on you to play him and find [email protected]

I'm so unknown about the world of games I just looked up what pregen is.