Only known as "The Bard," the subject has finally found a location to remain at for the time being. He has taken up residency in the Gutz Tavern and now spends his evenings teaching the histories and mysteries of Midgard to those in Kumpania, the ethereal caravan traveling through The Wilds of Tyr Na Linormr. I keep my distance but I've been able to catch a segment of his current tale, "A Conceit of Provenance."

There are concerning details held within the stories being told. I will need to cross reference with the CIL database, though many names of the people and places seem to be in archaic form or adjusted for anonymity. The details are still suspiciously familiar to details that the CIL would prefer remain veiled by the uncounted eras.
I have discovered a few of his followers who have sought out the true identity of The Bard, though further details of his origins tend to be lost to time. In all their years of searching, they managed to find only one piece which is rumored to be pertaining to this mysterious man; the "Ballad of the Bard."
I have preserved the piece within my report. I hope that other researchers in the Defense Council may identify related details from past or future reports.

Ballad of The Bard

The Bard’s story begins in ages long since past
Ere time immemorial, beyond our own sun
In a snow-capped forest amongst high elven caste
Bastard blood twixt elf and ‘man formed this misfit son
Banished, merely a child, into the cold plain
The reason was unknown for one who was so young
Though old enough in years to bear thy family shame
Shelter was had with humans where they lived as one
Newfound vigor pushed burgeoning passions to grow
A driving thirst for knowledge unleashed his desire
Discovery of music made his spirit glow
New songs he wrote every day within his shire
The World Song destined within symphony’s sire
Seeking the deepest hidden truth of melody
At Lokasenna’s Heart, the quest would retire
Within the mountain core lie truth of harmony
Alas, peace was not meant for the burgeoning bard
Mount Lokasenna’s toxic ash covered his home
The kingdom fled their homestead, lost, vagrant and marred
They swarmed to build anew like bees losing their ‘comb
Answers were sought in every myth, legend, and tome
Cursed gods had wrought bastard suffering since birth
Vengeance for the kingdom beyond an endless roam
Worst of the godly crimes, they’ve stole the people’s mirth
Decades upon decades plans unfurled for vengeance
Countless adventurers within machinations
Maneuvering the pawns to ensure ascendance
Brought through the breach, war with godly aberrations
A surprising first strike shattered their foundations
Old gods were cast out and the world recreated
One man’s quest hath sown havoc for generations
Chaos reigned on high, uncontrolled, unabated
Woe and woe yet more, weight of guilt could not be borne
Efforts went to waste, actions couldn’t be undone
Endless discord, the unfit god could naught but mourn
Failing through history revealed what must be done
The Song was found once more then vanished from our sun
Telling and retelling tales, stories of import
Working to stop folly in all worlds, one by one
Balance of thy cosmic scale always somewhat short 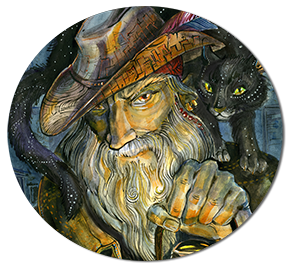 Personal Notes:
The Bard uses thaumaturgy and other illusory magic to enhance his stories. It enraptures the audience without actually using any sort of enchantment magic, which I usually detect in these types of cases. Very curious.

If this ballad is accurate (and actually refers to the subject), then there are a few things I was able to learn of this Bard.   Interpretation of the Ballad:
If you are interested in joining or learning more about the Celestial Inquiry Leader team, please review the current job opening posted by CIL Leadership here: The Authority wants YOU!

Nice article! I really like the way you've presented it, with all the mystery around the bard. you could maybe also add a section where the person writing the report is giving potential interpretation of the poem? I don't feel super confident I got everything out of it XD 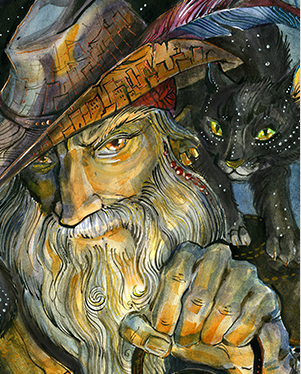 Thank you! It was supposed to remain unclear for a few reasons but I love the idea of adding the report writers interpretation. If I have time I may try to get that added :)

Hmmmm, very mysterious character. Seems almost after a Merlin archetype in that they are teaching people but keep their secrets close. I am intrigued to know more....   Good job on the Ballad of the Bard section as well.

Thanks! Some day the whole story will unfold...

Nice read! Especially liking the method of writing you used adds a bit of mystery to it. Pretty neat ballad of the bard as well but it did not clear things up that much for me but perhaps that is intended :p

Thanks, I wanted to keep it mysterious but I might add a little bit of clarification.

Ooh, I like the report approach to this challenge and that your bard is a "Possibly Problematic Person." I also love that he has so many aliases and your notes at the end where the investigator doubts the contents of the poem.

Thanks! I'm glad you like it. I'm trying to get a bit of "unreliable narrator" in there.

Awesome! So there is a chance/suggestion that the Bard was the god-sent king that dealt harshly with those who opposed him?   Also, what does the CIL acronym stand for? A tooltip at the beginning of the story could help clarify that.

There's always a chance that's the case ;)   As for CIL, it stands for Celestial Inquiry Leader and the CIL Leadership has posed a job opening here: CIL Recruitment Form   I'll update my article with this information too, thanks for the idea!

I loved the unique presentation as a surveillance report. They seem to be rightly worried about this character - half expected them to add a section overanalyzing his meal choices or him picking his nose.

You can never be too careful when surveilling a Possibly Problematic Person!