ADU-08s are a medium sized drone with a streamlined, plane-like body with elevators and stabilizer, and two rotors on each side with large side guards. The average ADU-08 is also equipped with a gun that fires non-lethal rounds, a taser and a castable/retrievable rope net. Their rotors can rotate 360 degrees for navigational purposes, and they have small, retractable landing gear, although it isn't often used since they usually only land onto charging docks or the harnesses of companion AI. Along with the battery recharbeability, they also have solar panels on the tops of their bodies, giving them a somewhat otter color.   The gun at the base of the drone rests on an omnidirectional pivot-point, and is a standard 4.5mm full auto that can either shoot steel, plastic or rubber rounds. Said rounds are fed into the gun from an internal ammo bay in the drone that holds 30-round cartridges. After the cartridge is emptied, it's fed back into the drone to be stored in a separate space so it can be reused later on.   The tasers are either used to short out a robot when taking to desperate measures, or for the rare occasion of when the drone needs to take down a human or another organic being. At default settings, it has the average voltage/amperage of a police taser at 50,000V upon contact then dropping to 1,200V and .02 - .04A, these settings, though, are able to be modified by both the unit and its parent company. This said, the drone is incapable of outputting a lethal amperage, even at full charge.   The net is also a tool made for catching fellow drones. The polyester-based material in the rope allows for strong weight-bearing relative to the ADU-08, and resistance to damage from weather and abrasion. The net itself is similar in build to a cast net used in fishing, but the netting isn't nearly as fine. 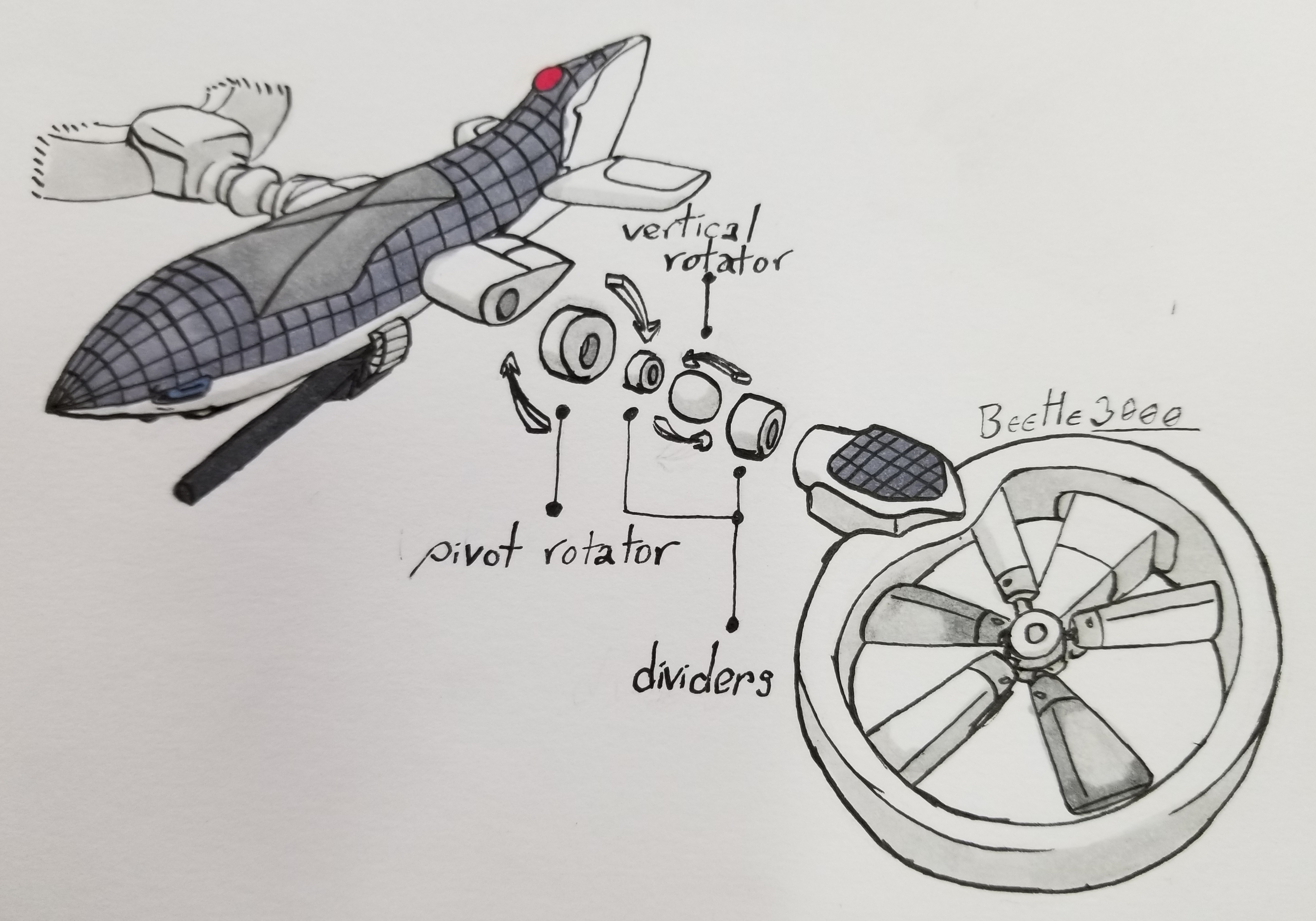 Like E-20s and Siphus bots, ADU-08s primarily rely on rechargeable battery power, but they have the addition of solar panels on the tops of their bodies that have the potential to greatly extend their time in the air depending on the weather.

ADU-08s are normally stationed in small groups, in which one is randomly selected as the 'team captain.' As a group, they all have a say in decision making, but the team captain is the most influencing decider. Since roles can shift regularly, there is no sure way to differentiate the captain from the others.   In general, whether it be in a specific establishment or out in the general public, they have equal status as E-20 units, who work primarily in law enforcement, but can also pursue other jobs and hobbies on the side if they see it fit.

They have equal intelligence to E-20 units, but tend to be.. a little more humble about it.

ADU-08 drones have optics similar to large LAI, but they're slightly smaller, and have the same artificial nervous system as smaller LAI like E-20s.

Scientific Name
ADU-08
Lifespan
40-50 years
Conservation Status
Extremely common, still in production.
Average Weight
20-25lb
Average Length
5'4"
Body Tint, Colouring and Marking
Most all come with a shiny white coloring, but much like with other mass produced AI, they can come in different colors depending on the factory of origin or if there's a company order for a specific design.