Such a troublesome man, that young Verti. Always sticking his head where it doesn't belong.
— Verti's grandmother

Verti Vertinan was a young and rebellious who was often seen partaking in dangerous endeavours. From a young age, he had developed a passion for exploration and skiing. His constant drive to challenge the authorities and to explore the unknown was, however, his undoing. After his frozen corpse had been uncovered from the Great Saralian Lakes, the King of Sarala, Tambet of House Sarap invested more into the costal guards.

Potatoes by Marco Antonio Victorino
Verti Vertinan was born into a large Saralian family in the city of Kõrp. His parents were wealthy nobles renowned for their long lineage and prestigious ancestors. Even before reaching his teens, Verti would often find himself in a heap of trouble. Wheater after peeking in on someone, snatching away important documents and scribbling inappropriate sketches on them, or by just saying the wrong things at the wrong time.   Things only got worse for his family as the young rascal reached his later teens. He was seldom seen at home, working on his studies, instead deciding to run around town causing trouble with his friends, most of whom were commoners. Eventually, the inevitable happened. Verti had found himself in the custody of the authorities after he and his gang had broken into a brothel right before the crack of dawn.

As a punishment for his crimes, Verti was exiled. When he had heard that he had but a few days to leave he hadn't thought much of it at the time, but a few weeks after his departure, the reality of the situation had dawned on him. Now filled with regret and despair over the loss of the wealth that he could never inherit from his father, Verti sought to turn his life around for the better. He decided to do something good for once!

Since no one wanted me around, I went out on my own to find something that could ideally benefit people all while providing me with entertainment,
— Verti's Journal, 1550 AA

Verti travelled from town to town, but everywhere he went, the same problems would come up. He would often slip back into his rebellious mood, causing trouble for the people of whatever town or village he was visiting. After being kicked out of another town and driven away from a village by the furious peasants, Verti decided to buy a ski set so that he could do some exploring of the Saralian countryside.

Before deciding to become an explorer, Verti enjoyed partaking in equestrian activities. His interest in horses had gotten him in trouble on multiple occasions as most of the horses he used weren't his own.   Another of his interest was art. He had always wished to own a marvellous gallery filled with gorgeous painting, but after accepting his lot in life as an explorer, he put aside those hopes and dreams.

The young explorer's first great adventure was to the darkest depths of Mesapõ forest. He hadn't expected to find anything interesting there as the place was believed to be relatively tame and the existing treasures had been looted centuries ago.   To his surprise, however, Verti ended up stumbling across the ruins of a long lost fort. Guarded only by an excessive layer of dust on every surface, Verti grabbed all he could. Once all the most valuable items were safe in his backpack, he returned to the nearest village.

After telling the villagers about the lost fort, Verti had become famous in Sarala. He continued his career as an explorer, looking through places such as the Pahki Marsh and Märela Uplands. Unfortunetly for him, the luck that he had experianced in Mesapõ never returned. Desperate for success, he looked for riskier endevours.

Orange Pumpkin by Jessica Lewis
While visiting Kirküla, Verti looked over the frozen straight and wondered what lied beyond. He knew, as most Saralians, knew that the Treaty of Toffin had made it illegal to cross the Great Saralian Lakes, but to him that seemed like an excellent oppurtunity. He imagined unclaimed lands and lost treasures all scattered throughout the ruins of once grand cities.   One night, when the temperature was low and the ice sufficiently thick, Verti made his move. Under the cover of darkness, he skied out of town, making his way to the sheet of ice that seemingly stretched across Haltjalahti Strait. He carried with him several bags for the loot that he expected to find and some of those bags held his rations and camping supplies. Right from the start, the journey was difficult. With the supplies weighing him down, he moved at a far slower pace than he had expected to move at. By the time the sun had come back out, he had made remarkably little progress. Despite all the problems he faced, Verti kept going.   In the afternoon the skies had cleared up, allowing the sun to show him the way, revealing the previously hard to see cracks in the ice. The sight of it all terrified Verti, but he refused to admit defeat. Instead, he kept pushing himself harder, moving as fast as he could physically push himself. To his horror, one of the ski poles managed to break through soft, partially melted ice. He tried moving back, but it was too late. The ground beneath his broke apart, and before he could prevent his demise, he had found himself below the ice.   Around a week later, his frozen body was recovered beneath the snow near a fishing pier.

House Sarap is the dynasty of the monarchs of Sarala. Although very influential, they face the threat of dying out in the coming decades. 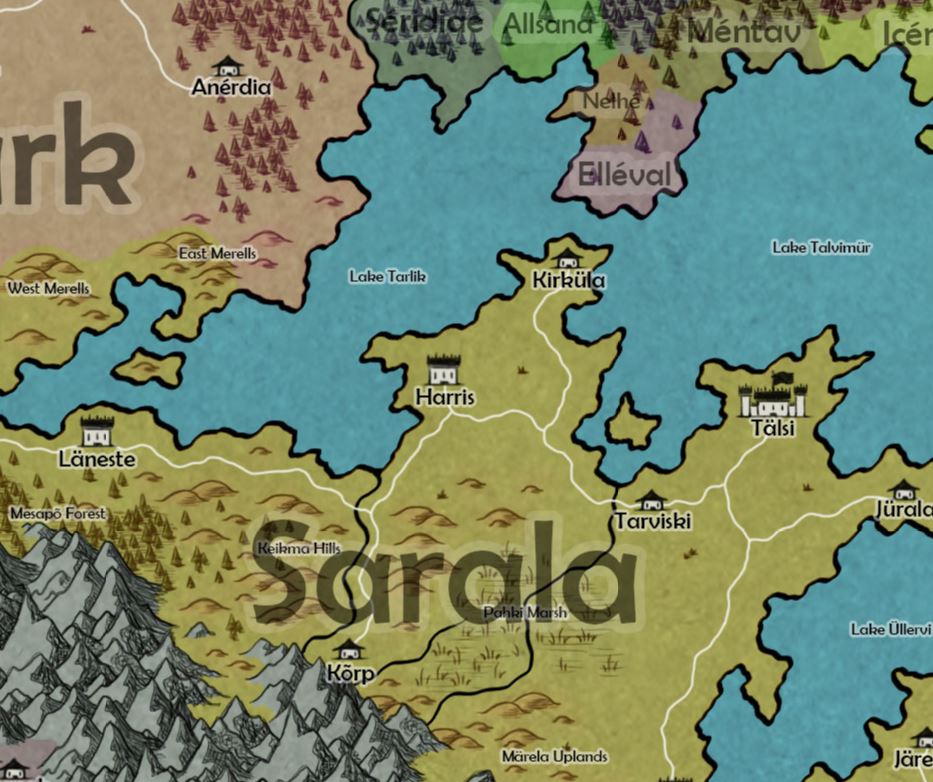 "Hey, wanna see if hitting him with a shovel will make him shatter?" - Cartman, speaking to Kyle about their friend Kenny, who had frozen to death minutes earlier.