An Alliance of Hillenist States

We, the defenders of Saint Hillen's teachings, should stick together, should we not? Look at all the chaos this heresy has brought upon our lands. Only by uniting our forces, just as the blessed one had done all those years ago, can we hope to protect his holy ways.
— Hans II Pentiwichen, Crown Prince of Pallernia

The Lipsig Treaty Organisation is a military alliance between the Peasants' Republic of Aussel, the Empire of Pallernia and their subjects in Jegrim and Tolden. Founded in the Ausselian town of Lipsig, the organisation was formed to counter the heretical Baglamist Security Union that threatened the national security of the newly independent Aussel.

Member states of the defensive alliance have military access between each other and regularly hold military exercises together. With Aussel being in the most vulnerable position in terms of its geopolitical location, the other members of the alliance have all sent military advisors and supplies to the country.

In recent years there have been discussions whether or not such a presence in the region should be expanded upon or reduced. The acting leader of the alliance, Empress Sofia of Pallernia, has expressed her desire to avoid war and to focus on her realm’s internal affairs. Some suggest this will lead to the empire taking a less active role in the region.

The Empire of Pallernia knows that it cannot afford to wage war until the separatist factions within the country have been pacified. If war were to break out, many of such rebels would side with the empire’s enemies.

Founded in 1548 by the Pallernians and Ausselians, two people who both followed the teachings of Hillenism, the Lipsig Treaty Organisation was purposefully created to oppose the Baglamist heretics and to ensure the national securities of all member states. The plan to establish such an alliance was the brainchild of Hans Pentiwichen, the crown prince of Pallernia.

The heir to the imperial throne knew that the Ausselians had sought to forge a defensive alliance a decade before him, but those plans had failed as Aussel hadn’t proven itself to the world that it could stand on its own feet.   Since that tumultuous period in Aussel's history the young republic had managed to stabilise and repel their former overlord's from Rükenland during the Sarzin Conflict. The victory was the proof the empire needed to see in order for their nobles to agree to an alliance.   They formalised the alliance between the two countries on the 1st of Tiylavar in the Ausselian city of Lipsig. Emperor Ruprecht, Hans’ father, and the chancellor of Aussel, Boguslaw Hittel.

Tolden and Jegrim were both forcefully incorporated into the alliance in the 16th century under the reign of Emperor Hans of Pallernia.   The puppet government of Jergim under the control of one of the emperor’s distant relatives, Ederich, joined the alliance against the wishes of its native people .   Tolden was ordered to join when Pallernian forces marched into their country and demanded tribute and while many of the locals were displeased, some saw benefit in such a defensive alliance. 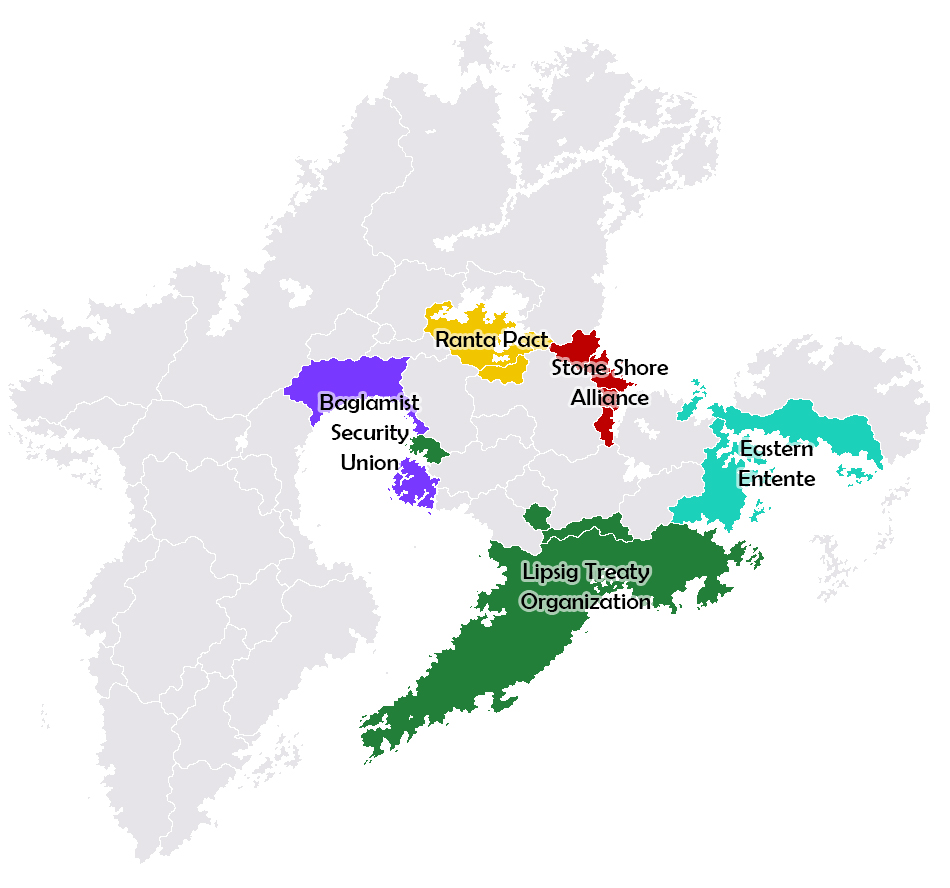 The most influential and powerful human nation on the continent

A human country whose people are under foreign rule

Kingdom of Tolden is an elective monarchy in Southern Lethea.

Placeholder pumpkin is perfect for this month. :D   Really interesting article - I like the fact that they hold military exercises together. I guess being forcefully ordered to join an alliance isn't a great thing, but judging by the diplomacy web they don't seem to mind too much?

Thanks for the reminder, the web needs a few tweaks. I based it off the opinions of the governments of those nations, so Jegrim's opinion should still be fairly high as their leaders are from the same family and puppets of the ruling house of Pallernia.   Tolden's leaders will probably have mixed feelings as some see them as a nice way to guarantee their protection, while others view it as a means to keep them paying their tribute to Pallernia.

I really like the look and layout of your article, along with the interesting content. There's a lot of interesting relations going on here, too, and I like how they're explained throughout the article. The diplomacy web looks neat, even if it is simple.   It's also neat to see an alliance where the members aren't exactly happy about it. It is a take on the alliance that I hadn't even thought about so I thought it was especially creative. Tolden and Jegrim were both forcefully incorporated into the alliance in the 16th century under the reign of Emperor Hans of Pallernia.

Ah sir Dhelian. Your articles have this quality to them like I'm reading it straight from a history book. (One that isn't boring mind you)   I decided to kick on some HoI 4 music while I read this cause it just felt so fitting. You convey the politics and military trials of this organization so well! I also enjoyed having a map, because it really helps.   Though I do think slapping that bad boy image into an actual world anvil map would do loads!   Keep up the amazing work!