The largest city and the capital of the Imperium of Valhértis was Helendriel.

Dawn of the Imperium of Valhértis

In the year 872 BA, the tension between the Sehenians and Nehenians had reached a breaking point. The Sehenians were displeased that the Imperium of Qerthéllnaval was willing to sign trade agreements with Humans and other non- elhen, but for the Nehenians, trade had been good and it only helped the growth of their prosperity. A meeting was called between a Qerthéllnavalic diplomat and the leader of the new Sehenian Independence Movement but two sides failed to come up with a compromise that would benefit both sides and so the Sehenians declared their independence from the Imperium of Qerthéllnaval.

Most people expected a massive war between the two sides, but the Imperium of Qerthéllnaval chose to accept the decision of the Sehenians and they entered into a non-aggression treaty. The southern territories that had become independent became known as the Imperium of Valhértis, named after their new monarch Imperator Valhértis Talvor Hertin.

While Qerthéllnaval was still treating almost all species with the same amount of respect, the Valhértisians weren't as tolerant. Women did not have political right in the Imperium and the humans who lived in the nation were often discriminated against. In 867 BA a human village was wiped off the face of the Ryel for not paying their taxes on time, even though the taxes from the settlement had arrived a few days earlier.

Though the Imperium of Qerthéllnaval didn't approve of the discrimination and genocide, they had to stay allies because they feared what a war between the two superpowers would cost.

Back when the Patic Kingdom had lived under the rule of the Imperium of Qerthéllnaval, they had been considered important and respectable craftsmen, but after becoming a part of the new Imperium of Valhértis, the suffering of their people had begun. The Valhértisian people refused to buy their products, and trade with the panedur had stopped. The economic downfall caused forced them to live in poverty and the common man could barely afford to pay for both the taxes and his daily, or sometimes even bidaily, meal. The King of the Patic Kingdom, who was a vassal of the Valhértisian Imperator, had demanded that the sehenian merchants return, but the Imperium was offended by the King’s action and instead of merchants, the Imperium responded to what they viewed as an insult, by sending the army instead.

In the spring of 866 BA, the Valhértisian army entered the Patic capital. At first, the panedur thought that they were there to keep order. But after a few days, the army started gathering people and executing them in mass. The panedur had a small home defense army, but it couldn't beat their superior foes as they lacked the equipment and manpower. After the Patic defense force was defeated, the panedur started fleeing their ancestral homeland. At first, they attempted to leave through the main gate, but that was guarded by the Valhértisians who killed every panedur who tried leaving through that exit. Luckily for them, there were multiple secret passages out of the mountains that the Valhértisian army hadn't discovered. In the cover of darkness, thousands of panedur managed to use the secret passages to escape. A charismatic panedur by the name of Tranak anz-Pughal led the others to safety and they eventually moved to the Enlitic peninsula.

Ever since the birth of the Imperium of Valhértis, the young nation had always dreamed of expanding south. In the eyes of the Sehenian people, the land was empty and rightfully Sehenian. This, however, was not true. To the south of Vadéhnede forest lived the Vivernian tribes and to the east of the forest, in a dark swamp, lived Rehenians, a cultural and linguistic brother to the Sehenians who grew apart because of their isolationist ways.

The Following Material Needs to be Updated

In late 860 BA, a small army was sent to the Wetland swamp. The army’s objective was to subjugate the Rehenians in less than a year, but the army never returned. In the spring of 859 BA, a Rehenian diplomat arrived in Helendriel, the capital of the Imperium. The diplomat declared that the army had died in the swamp and that they hadn't even managed to reach a single Rehenian settlement. The diplomat offered the services and loyalty of the Rehenian people, but only if the Imperium swore to again never send an army through the swamp. The Imperium agreed to the terms and Wetland county was integrated into the Imperium.

In 853 BA the Selhvénic army was moved south of Wetland county. The plan was to take over the territory that was inhabited by the Vivernians. In the summer of 852 BA the army was ready to attack. The Anedrum tribe was first to fall and their territory became Anedrié county. The next to fall were the Durolitum. They had a decent army, but it’s hard to win a battle when your enemy has five times more soldiers. Durolitum territory became known as Livénde county.

After the Elhvénic Entente was broken, the Selhvén expected an attack, but they did not expect a war on three fronts. Since the Selhvénic army was in Vivernian territory when the war started, they started fighting the local rebels. The army received orders to return north, but the rebels kept harassing them. Frustrated by rebels, the general of the Selhvénic army chose to ignore his orders and kill the rebels. The rebels fled to the city of Vivonia and they managed to defend it against all Selhvénic attacks.

Since most of the Selhvénic army was in Vivernia, the Nelhvén were able to occupy Ärli and Rahu county. The Dwarves were marching through Jegrim. Their plan was to strike the Selhvénic heartland, Bathélierre forest. The Selhvénic Imperium was in panic. The garrison that was guarding the miners at the Enlitic mountains were called back to defend their homeland and a large army was drafted to fight back and defend the north.

In 844 the Dwarves reached the forest. There were only a few troops stationed there, but the newly drafted army was still nearby. The Dwarves managed to occupy all settlements around lake Hanthelie, but then they ran into the Selhvénic army.

While the Dwarves were fighting around the lake, Nelhvénic troops had reached Levinn Castle. The owner of the castle was a Selhvénic noble who took part in the Patic Purge. Because of his crimes, he was sent to the King of High Morphel and his castle was sacked and pillaged. The Nelhvénic army kept occupying settlements all the way to the Charwood forest where they were stopped by a heavily fortified bridge.

The rebels had defended Vivonia until 838 when they decided to go on the offensive. This action caught the Selhvénic army off guard and they fled back to the forest. The rebels managed to take back everything on their side of the river, they even destroyed all bridges so that the Selhvénic army would have to build new ones if they wanted to return.

The drafted troops who were defending against the Dwarves near the lake had fled deeper into the forest, but then during the Battle of Sylebbeth the Selhvénic army had returned from Vivernia and joined the fight. The drafted units were mostly peasants who were forced to fight in the army, so their morale was low as most of them never wanted to be in the army and the proper Selhvénic army was also low on morale as they had just been defeated by inferior Humans. Despite the odds, the Selhvén managed to win the battle, although there were incredible amounts of dead and wounded on both sides. The Dwarves went to the Gnomish fortress of Rockden, but the Gnomes had had enough of the Dwarves and they ended their open military access treaty with the Dwarves. The Dwarven army was forced to go north, towards the Charwood forest.

Since the garrison had left the mining things had gone relatively smoothly. Over 6000 Selhvénic miners worked in the outpost and they had discovered a natural network of tunnels in the Enlitic mountains. Some wanted to go down there, but the leader of the outpost insisted that they should wait for the garrison to return so that the troops could defend them down there. Unfortunately for the miners they had gathered the interest of the local creatures. Without the garrison to protect them the miners were caught off guard when the Enlitic monsters attacked. The monsters were smart enough to surround the miners, forcing them to flee into the mines. About 4500 of the miners had made it to the mines when the entrance collapsed.

By the year 830 BA the war had come to a stalemate. Both sides were on opposite sides of a bridge. The Nelhvén and Dwarven troops had occupied the city of Cherendale and the Selhvénic forces were in Fort Kalph. The Vivernians kept guarding their river, but they never moved to attack. The two sides occasionally tried to attack over the bridge, but both sides were too fortified. This stalemate went on until 802 BA when the Selhvénic Imperium surrendered to Nelhvénic demands. The peace treaty was signed on the bridge that they had been fighting over for years.

Despite the devastation and loss of life that this war caused, it also helped create a friendship between Nelhvén and the Dwarves. After the war a popular saying emerged: “Wyl sé Qasventhér y nav he Sindérh”, “The War of Retribution is ours to remember” Treaty of Cherendale ( 802 BA )

After the war, the Selhvénic Imperium was crippled. Many towns and villages were abandoned or destroyed during the war and people from the countryside had moved into walled settlements. The Stone Shore, a fertile land that fed the rest of the Imperium, was all but abandoned and those who stayed were not pleased with their government. Since the fields of the Stone Shore were empty the rest of the country was beginning to have food shortages.

In the autumn of 800 BA the harvest was incredibly bad and people were beginning to panic and starve. As a result, the Selhvénic government decided to send the Vivernian tribesmen who remained in the Imperium to the Stone Shore. The tribesmen were to become farmers and landowners. Though this decision was good for the Vivernian tribesmen, it also meant that if a war was to happen between Vivernia and the Imperium, the tribesmen living in the Imperium will most likely support the Selhvénic Imperium. There were many nationalist groups who protested the government's decision, but even they realized that they might starve if without the Vivernian farmers.

By the year 765 BA the Stone Shore was a thriving region of the Selhvénic Imperium, as well as the most diverse one. Many Humans, Dwarves, Gnomefolk, and Elves lived in the region. They had rebuilt some of the old settlements, but they also decided to construct new cities and trade was one of their main sources of income. The Stone Shore had to send most of the food they harvested back to the heartland of the Imperium, but the other resources of the Stone Shore were available for trade. 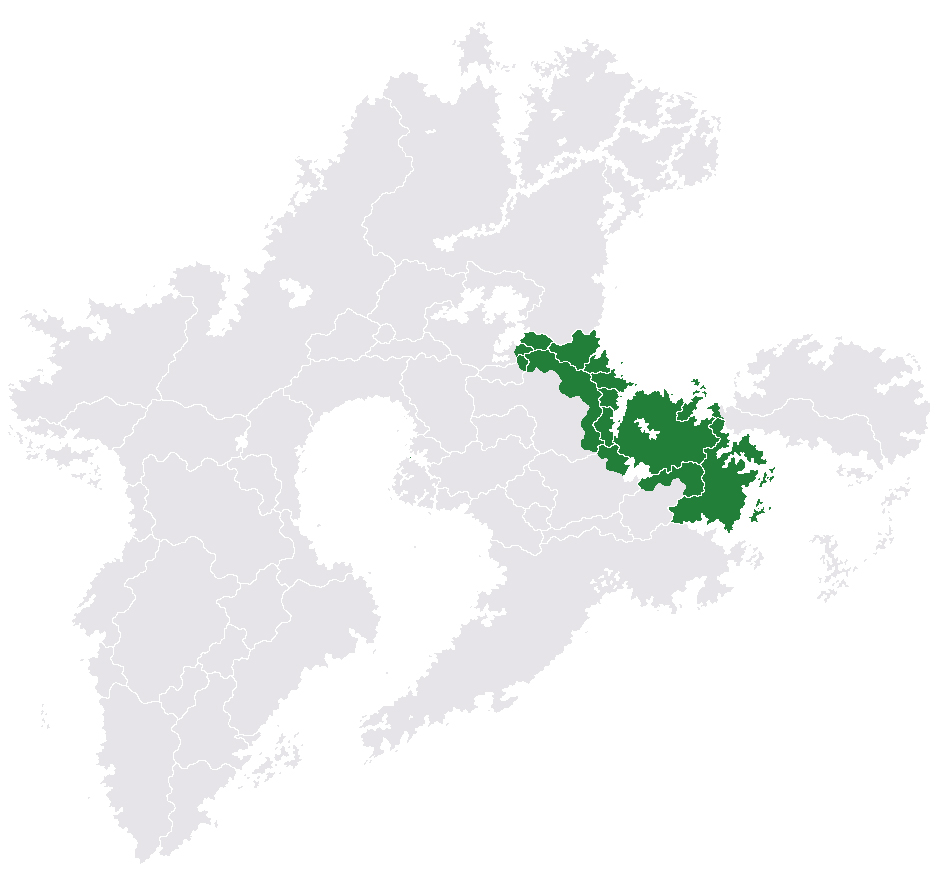