Guide to the Battle System

Units are what players use to fight each other or the gamemaster with. Currently, there are thirteen different unit types, all of whom can be hired by anyone with the necessary resources to do so. Special units that are based on the normal ones, but have new special abilities and better stats also exist, but those are unique to ethnicities. Each ethnicity is supposed to have one special unit.
Melee units: Light Infantry, Light Cavalry, Heavy Infantry, Heavy Cavalry, Military Police, Pikemen
Missile units: Archers, Mounted Archers
Artillery units: Artillery, Battlemages
Support units: Engineers, Medics, Supply

The battle system uses simple hex maps that are easy to create, even in virtual tabletops such as Roll20. All of the movement ratings on the unit cards represent how many hexes they move and the same goes for the unit range.

What colours the gamemaster uses to make the map is irrelevant, the important thing is that players need to be aware of what is what. To represent different levels of elevation, I personally recommend using increasingly lighter colours. And for terrain that goes below the default height level, you could use darker colours.

When the terrain goes up by two levels instantly, then normal units can't move that way. Otherwise moving up by one level is fine but it slows the unit down, reducing their movement rate by half. Other terrains, such as forests, bogs, and many others also exist, but how they affect the units still remains unknown. 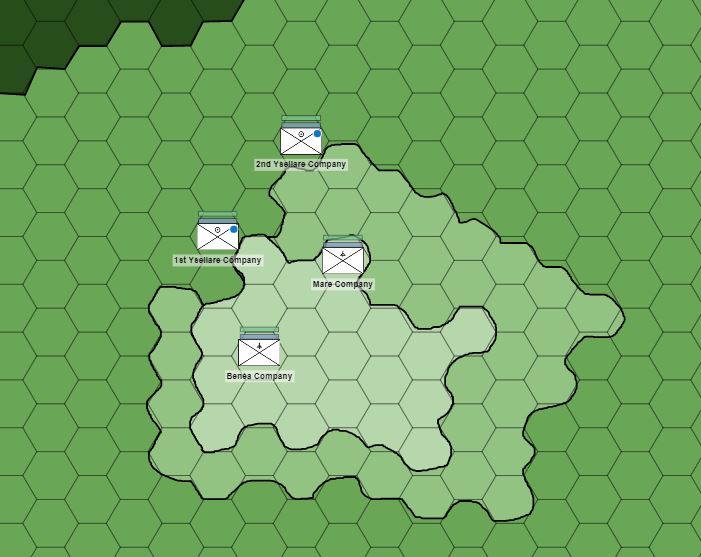 Movement with the battle system is pretty simple. Each unit has a movement rating and this number has to be an even number. When moving on regular mostly even terrain without any penalties, the unit will move as many hexes as their movement speed allows them to do. For example, a light infantry unit has a movement rating of 4, this means if they want to move on flat land, they get to move up to four hexes. If a unit wishes to move a few hexes, then perform a missile attack, and then move again, then that is completely possible.

All units have access to a type of attack, even if they have 0 skill in that type of attack. Only skills that have a - instead of a number, are unavailable. Normal attacks are solved with a 5d10+(skill)+(other bonuses)-(enemy Damage Reduction). This number will determine how many casualties the enemy unit takes.

Example: Light Infantry vs Heavy Infantry
Light infantry attack and roll 5d10+6+0-20 (or simply 5d10-14). The roll results in a 24 which means that the heavy infantry unit ends up losing 24 soldiers.

If the enemy Damage Reduction is too high, there is a chance that the result will end up in a number that's under 0, this means that the attacker will take casualties instead. These failed attacks don't affect ranged attacks such as the ones that use the missile or barrage skills.

Example: Military Police vs Pikemen
Military Police attack and roll 5d10+2+0-25 (or simply 5d10-23). The roll results in a -7 which means that the military police unit ends up losing 7 soldiers. 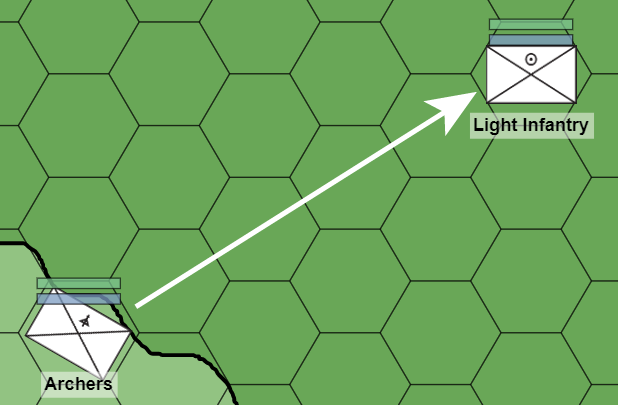 To perform a missile attack against an enemy unit, the unit has to have ammunition (unless stated otherwise) and the enemy has to be within range and in sight.

Example: Archers vs Light Infantry
Archers attack and roll 5d10+10+0-14 (or simply 5d10-4). The roll results in a 32 which means that the light infantry unit ends up losing 32 soldiers and the archers lose 1 ammunition.

To perform a barrage attack, the unit has to target a hex that's in range. Barrage attacks don't require sight. When the hex has been selected, the unit will have to wait until their next turn to fire. This means that the unit doing the barrage attack has to predict enemy movement in order to inflict the most amount of casualties.

The unit on the targeted hex will take all of the damage and if there are units on adjacent hexes, then they will take half of that.

Example: Artillery vs Light Infantry and Military Police
Artillery unit targets a hex with a unit of light infantry on it and military police unit adjacent to it. Both units don't move on their turn and the artillery unit rolls a 5d10+15+0-14 (or simply 5d10+1). The roll results in a 36 which means that the light infantry unit ends up losing 36 soldiers and the artillery lose 1 ammunition. The military police adjacent to the targeted hex should lose 18, but since their Damage Reduction was 12 instead of 14, they lose 19 soldiers instead.

Every time a unit deals damage to a different unit, they also roll for morale damage. Some units have a special "Shock and Awe" ability and attacks that use the barrage stat allow them to deal two times more morale damage than normal. Most normal units deal 1d10+(the number of hostile casualties) morale damage to their targets. A unit that has been reduced to 0 morale will be forced to flee toward the edge of the map. Once they've gone over, they have escaped from the battle. Other units will be able to pursue them and their general will be able to rally them back into the fight. Military police units reduce the effects of the morale damage by half.
Example: Light Cavalry vs Light Cavalry
The light cavalry unit attacks and rolls 5d10+2+0-10 (or simply 5d10-8). The roll results in a 20 which will mean that the targeted light cavalry unit will lose 20 soldiers and then the attacker rolls an additional 1d10+20, resulting in 29 morale damage for the targeted light cavalry.