A couple hundred years ago, there was a strange occurrence between the Hot Isle mountain and the Thunder Mountains. The Citizens of Block City, being in the middle of the two, started stacking concrete blocks on top of another to a tower, so that they could observe the mountains.
The process of making concrete was taught to the people by the Conkeldurr living here. They are the true inventors of concrete, and were also the ones who actually built the tower.
By the time the tower was built, it was already too late: The occurrences were over, and nobody knew what caused them. But the Block Tower should still prove useful: The newly founded Lesho Pokémon League used it as a HQ. But over time, the central position proved impractical, as it was too easy to get to the Pokémon League as a rookie trainer.
After the Pokémon League left Block City, the Block Tower did not stay unused for long: Ever since, it has been the gym of Block City. Currently, its leader is Leader Ryuka.

The Block Tower is used by Leader Ryuka as the place of her gym. The actual gym battles usually take place in the top floor, which overhangs to the south-west by 5 meters in both directions. This means, the arena ground is composed of a 10x10 square with a 5x5 corner missing.
The fact that there are no stairs but instead holes in the walls for climbing has 2 purposes: Firstly, it checks that the trainer that challenges her has a Pokémon that is strong and powerful enough to carry them climbing. Secondly, it evens the ground between Leader Ryuka and her challengers and other people, since she is missing a leg and thus cannot climb stairs as well, but can climb walls very well using her muscular arms.

The tower is made from 4 big cuboids, all of which are made from pure concrete, and non of which having any carvings on the outside, except for a 3x3-meter square entryway on the lowest one.
The lowest block is also the biggest one in width and length, with a base of roughly 8x10 meters, but only about 3.5 meters high.
The second block is the highest one, with a base barely smaller than the bottom one, and a height of roughly 30 meters.
The third block has the same measures as the bottom one. The overhang is almost exactly parallel to the bottom.
The fourth block is a cube of 10x10x10 meters, which overhangs to the south-west side of the tower, which is the front right side when standing in front of the entrance.

The walls of the Block Tower are about half a meter thick. But on the inside, there are many carvings and holes in it. Some of them look carved out, but most of them look as if big parts of the wall were broken out. Most probably, those holes were the work of fighting type Pokémon.
Besides the holding walls, there are no walls or floors in the inside of the tower. This also means: There are only 3 stories in the tower: One bottom floor, one floor on the first overhang that is parallel to the bottom, and one floor in the cube block. Additionally, there is one roof floor, which is reachable through a 1x1 meter opening on the roof, closed off with a metal trap door, but not connected with stairs or anything the like. The only way to get up is to hike the walls, using the holes in them.
Alternative Names
Block City Gym
Type
Tower, Mage
Parent Location
Block City
Owner
Leader Ryuka
Owning Organization
The Pokémon League 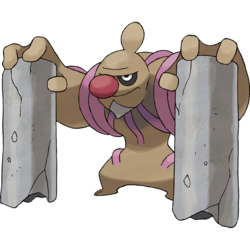 This is an extremely good article! I love the amount of detail and effort you managed to put into this article. The history of this tower was very interesting to read and served as a good basis for the rest of the article. What I was most amazed about was the amount of detail you put into the architecture of the tower. It really is interesting to read and offers for a good and shot article to read. Congratulations and keep up the good work!