Reedling is a rare Pokemon that used to live in the plain lands of the Lesho region. Their body is covered in moist soil. They like to cuddle with their trainers, ruining their clothes in the process. Their Reed hair is fragile, and Reedling that lose all of it lose their ability to evolve.
Reedling evolves into Thiefern starting at level 17. It is one of three species that were bred by Prof. Cinnamon to give to you and your Vivo, along with Diristella and Dugly.

Reedling's body is made up of moist soil. Its tongue wabbers around uncontrollably while walking. Its feet are oddly formed roots with heel-like outgrowths. Reedling's top head is covered in moss and grass and its hair is made up of long reed grass. Its shiny variation appears dried out, with orange grass leaves and moss.

Sometimes, when they are at the daycare, an egg just appears. Nobody knows how that happens.

Reedling's plants are based on moss, grass and reed. These plants, especially moss, are the first ones that ever grew on land, marking the beginning of life on land. Reedling's evolution line continues this with Thiefern and Piroak. The name is derived form "Reed" and "-ling". The later one is a postfix of both "underling", marking the start of the bandit-aspects of this line, as well as a postfix for "sapling", marking the before mentioned evolving process.

The shiny variants of this line take on an autumn-look, where greens are replaced with oranges. 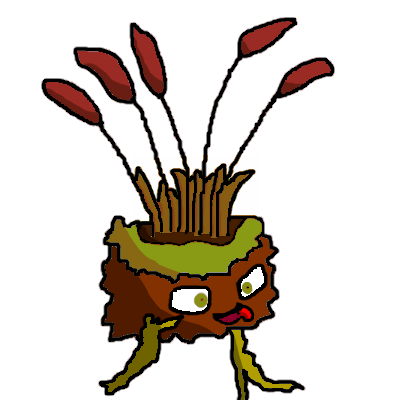 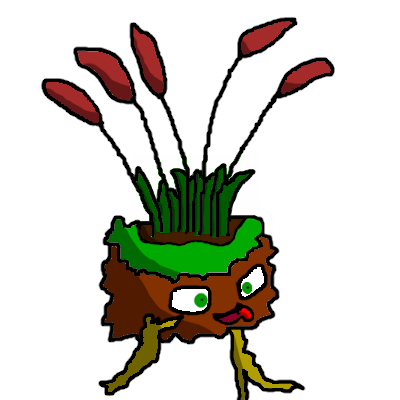 Scientific Name
The Reed Grass Pokemon
Conservation Status
Rumor has it that Reedling are dying out, since nobody has seen one in the last century besides the ones that are owned by trainers and breeders.
Average Height
0.7 m (with hair)
Average Weight
10 kg

Are you planning anything about famous trainers that have one, or any second evolved form of them? :)

HaHA! Indeed this pokemon is used by Leader Emil of Color City. His article is scheduled for Sun, 9 Dec. Also, depending on which Pokemon YOU chose to travel with, this one either might be your or your rival's starter Pokemon, or it would stay with Professor Cinnamon. Or would it? ;)

This is so adorable, I love it!