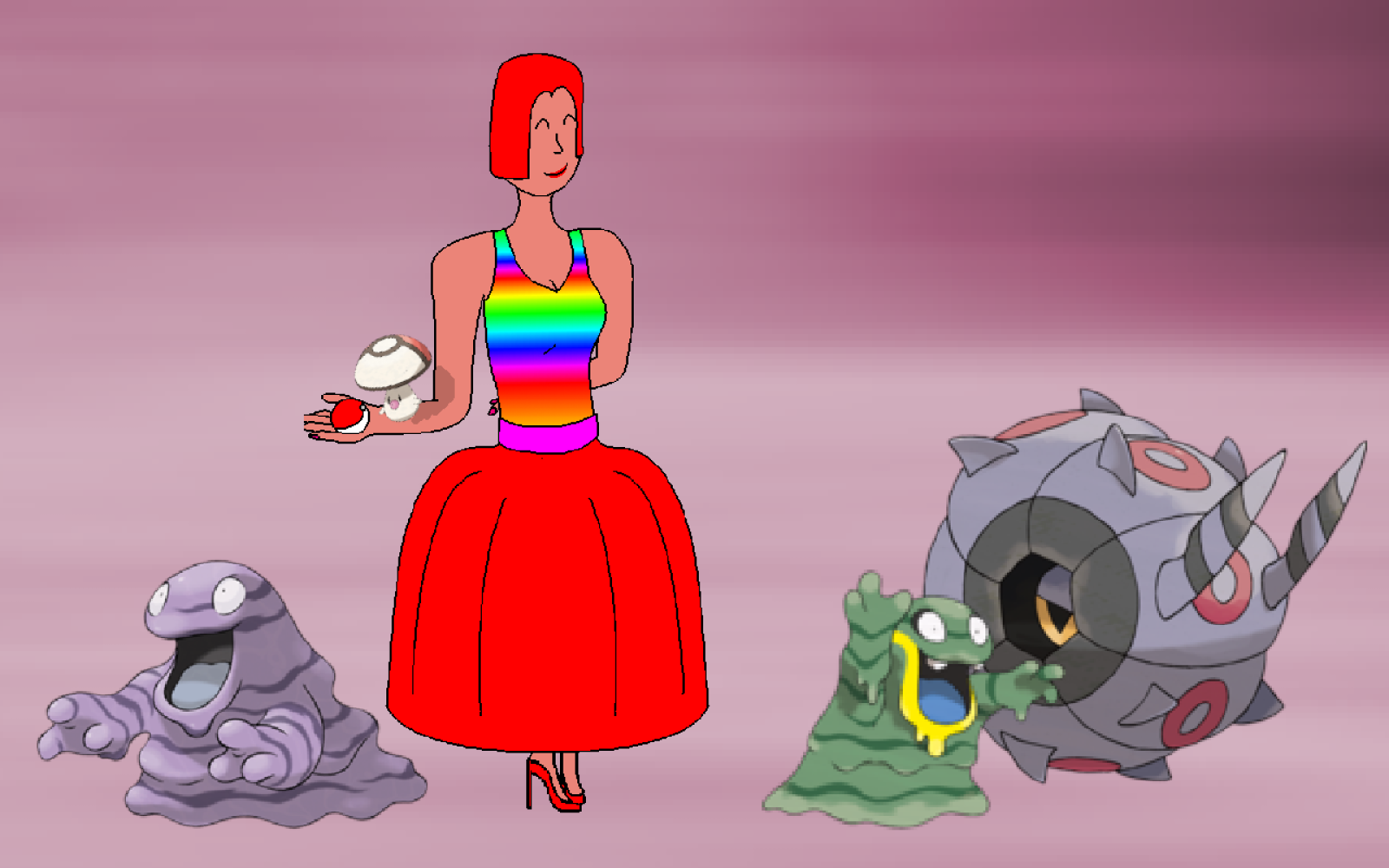 Yes, I did beat her. But my Pokémon didn't like it. And my ears didn't either.
— A recent challenger of the West City Gym.

Having spent her entire life side by side with poison type Pokémon, and surrounded by toxic waste, Amanita gained general immunity to natural poison gases, spores and acids. Besides that, she is relatively fit and healthy, and shows no physical sign of stress, despite her constant tracking of the Trade Guild.

Amanita is a slim woman with well tanned skin. Her proportions are close to the cultural ideal of an attractive woman. Her hair is always trimmed to a pot haircut, matching her partner Foongus' look.

Amanita often holds her hands behind her back and smiles, not showing her thoughts to the outside, but instead always making a positive impression. Her voice is extremely high pitched, and she pronounces every syllable individually in order to make sure that she gets understood. Most people like being around her, until she starts talking.

Amanita always wears her custom made dress. The top part of it is rainbow colored and shows off her feminine features, which is a common part of her negotiation strategies. The bottom part looks like a red mushroom cap, for the same reason as her pot haircut: To resemble her partner.
She likes to wear red high heels - although she does sometimes change them for more comfortable shoes when business gets serious. Additionally, she always uses red nail polish and lipstick.

Besides her signature Pokémon in Foongus, Amanita also calls a Whirlipede, a Grimer, and an Alolan Grimer her own. Her Alolan Grimer was given to her by her fiancé, the designer Mario, an alolan man who met her on a vacation trip to the Lesho region.
Amanita's specialty in battle is slow and steady, grinding her opponent down by intoxicating them, and not taking damage themselves.
It should be noted that Amanita also owns an Alolan Marowak and a Krokorok her own, given to her by The Pokémon League, but does not use them in gym battles. She only uses these Pokémon to deal with the common Steel and Electric types around the town, since a pure poison team would not allow her to maintain her executive power within the city.

Before becoming the Gym Leader

As a child, Amanita loved to play on the West Island Dump. She used to play with the Foongus in the dump, who she always adored for their cute little faces and perfectly round caps. She liked them so much indeed, that her very first partner was a Foongus.
Unwilling to help any of the big companies, who didn't care for her beloved Pokémon, Amanita did not join any company when she became 16. Instead, she started doing Pokémon battles against strangers, who happened to pass by the dump. Being a talented trainer, and having a deep bond with her Foongus, she soon started to earn her living this way.
When Amanita was 20, the current gym leader, now Ex Gym Leader Tobor, noticed her. He was already 57 years old, which is well past the average retirement age for a Gym Leader. But he has not found a worthy successor: Someone who was unbiased in the economical landscape of West City, while still being an adult - since he knew that the average West Citizen would not take a teenager seriously enough.


After becoming the Gym Leader

There she was, Amanita, taking over the West City Gym at the age of 20. Designing the new badge and transforming the gym from steel- to poison-type took about half a year, which Tobor gladly bridged. But then, eight years ago, with the brand-new Shroom Badge, the gym re-opened, and for the first time, Amanita really felt like a serious adult.
But then, she really felt what her new responsibility meant, when the Trade Guild was founded in West City, three years. Since that day, Amanita is constantly busy keeping them at bay, making sure that no one organization had too much power over the regional economy.

Amanita holds onto her political ideals that made her not join any company in the first place: There must not be any force with too much power. There must always be fair competition. And the strongest trainer must always be beatable by the two combined that come after them.

Amanita is a gifted negotiator. She has the talent to perfectly balance seduction, annoyance and logical arguments, to achieve most things she wants. And even if all fails, her battle prowess is still very high, and did help her to achieve one or the other goal as well so far.

If you like my world, and you want to decide how YOUR adventure proceeds, why not join my Discord, using the link down below?
Gym Leader