In Lazuur Avatars, every living (and ‘unliving’) thing has Damage Trackers which when filled signify that the creature or character is unconscious, dying or dead.

Damage comes in either Stun or Physical damage. Stun damage represents minor scrapes and bruises. Physical damage pertains to harsher injuries like lacerations needing medical attention, joint sprains, bone fractures & breaks, and the like. As one might guess, it’s far easier to recover from Stun than Physical damage.

b = fractions are rounded up (e.g. a character with 3 Willpower would have 12 boxes on their Stun damage tracker)

When both trackers are full and more damage is incoming, the Overflow track gets filled up, and when full, it’s likely that the character will die or have to permanently burn a few points of Luck to miraculously survive.

Whenever there’s incoming Damage to a character, a Damage Resistance Test is made. This is usually comprised of the character’s Body + Armor, but synergies may apply like successes from a Close Combat: (Shield) Block + Strength in melee, or a magical effect like an Armor Spell. Additionally, some forms of attack like that of piercing crossbow bolts & picks, or elemental Combat Spells have Armor Penetration (AP) which deducts the target’s effective Armor. Some forms of Damage like that caused by Direct Combat Spells is only resisted by Body or Willpower (as specified by the Spell) and ignores the target's Armor and cover entirely.

(See the Combat section for examples of the Damage Resistance Test.)

One of the most common and pervasive modifiers to nearly all dice rolls are Wound Modifiers. For every three points of Stun or Physical Damage a character has suffered, they lose one die. Wound Penalties never affect Damage Resistance Tests or Drain Resistance Tests.

When given ample time and a safe enough place to rest, the body will gradually recover on its own. All Stun Damage must be removed before resting to recover from Physical Damage begins. If twice the number of successes needed are reached within a period of rest, it can be said that it only took half as long (like getting 4 successes on Stun Damage Recovery, but only having 2 points of Stun Damage, thereby taking half an hour to feel fully restored).


Mages all begin with the Slow Healing Flaw (see page ###), meaning that they have Bane on Recovery Tests. This Flaw can be countered with the Quick Healing Edge.

* synergies for Natural Recovery include:

Dhagarr (pictured below), a zharr patrolman checking the forest around town, had a run-in with some feral wolves and had to put a few down before the others took flight. Due to his armor and skill, he took little in the means of Physical Damage, but it was a prolonged fight and he’s a bit bruised up (Stun Damage). At 5 points of Stun Damage and 2 points of Physical Damage, he’s only missing 1 die as a Wound Penalty since only every three full points of Stun or Physical Wounds count against him. 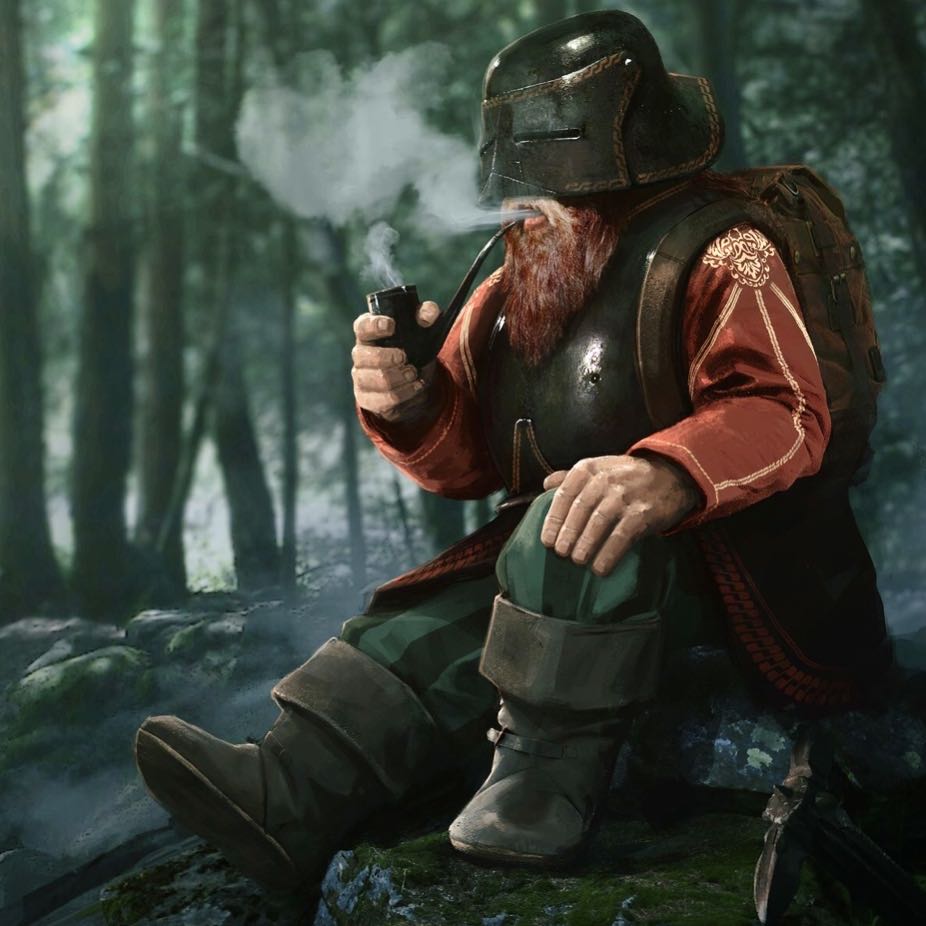 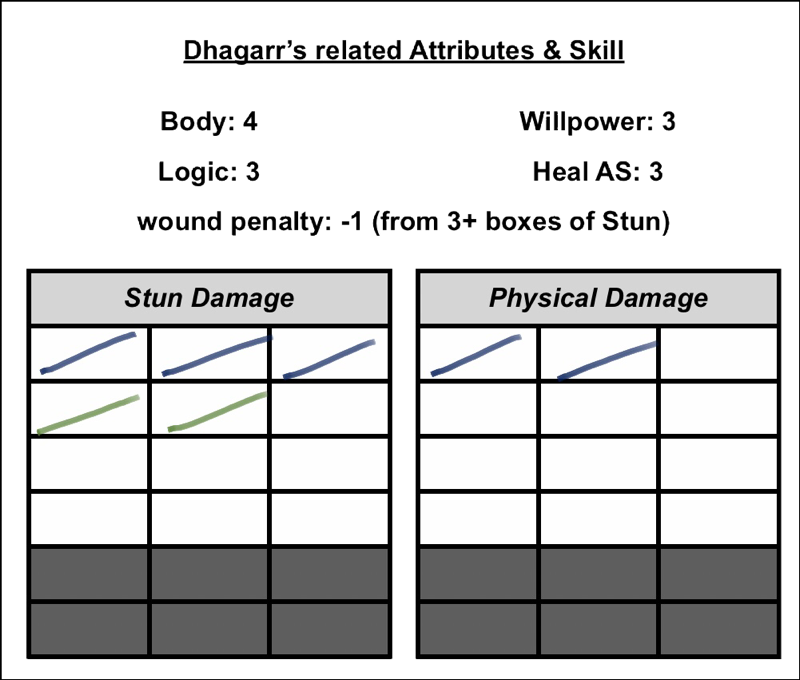 He decides to rest up a bit before either continuing the patrol or returning to the safe confines of town. Having a bit of medical training, he first rolls his synergy of Heal: Recovery 3 + Logic 3 - Wound Penalty 1 and gets 2 successes. Next, he spends an hour and makes the Natural Stun Recovery Test with Body 4 + Willpower 3 + Recovery synergy 2 - Wound Penalty 1 - situational modifier of 3 — the GM says that he can’t completely relax since he needs to keep an eye out for potential threats (-1), and it’s not the most comfortable rock to perch upon (-2) — for a total of 5 dice. He gets 2 successes, bringing his Stun Damage from 5 down to 3 (erasing the green marks from the Stun Damage track), but he’s still left with a -1 Wound Penalty on nearly all Skill or Attribute rolls. At the end of the hour, he packs up his pipe and gets back to it.