Romelus and the Rat

Late in the Third Era, a fearsome warlord named Kesner Romelus terrorized the southern area of what is now The Fidean Empire. His reign of terror lasted nearly 30 years, during which he rode with his army from village to village raiding for wealth and land. His name was spoken with scorn and terror as townsfolk erected barriers in a vain attempt to protect themselves and their families. 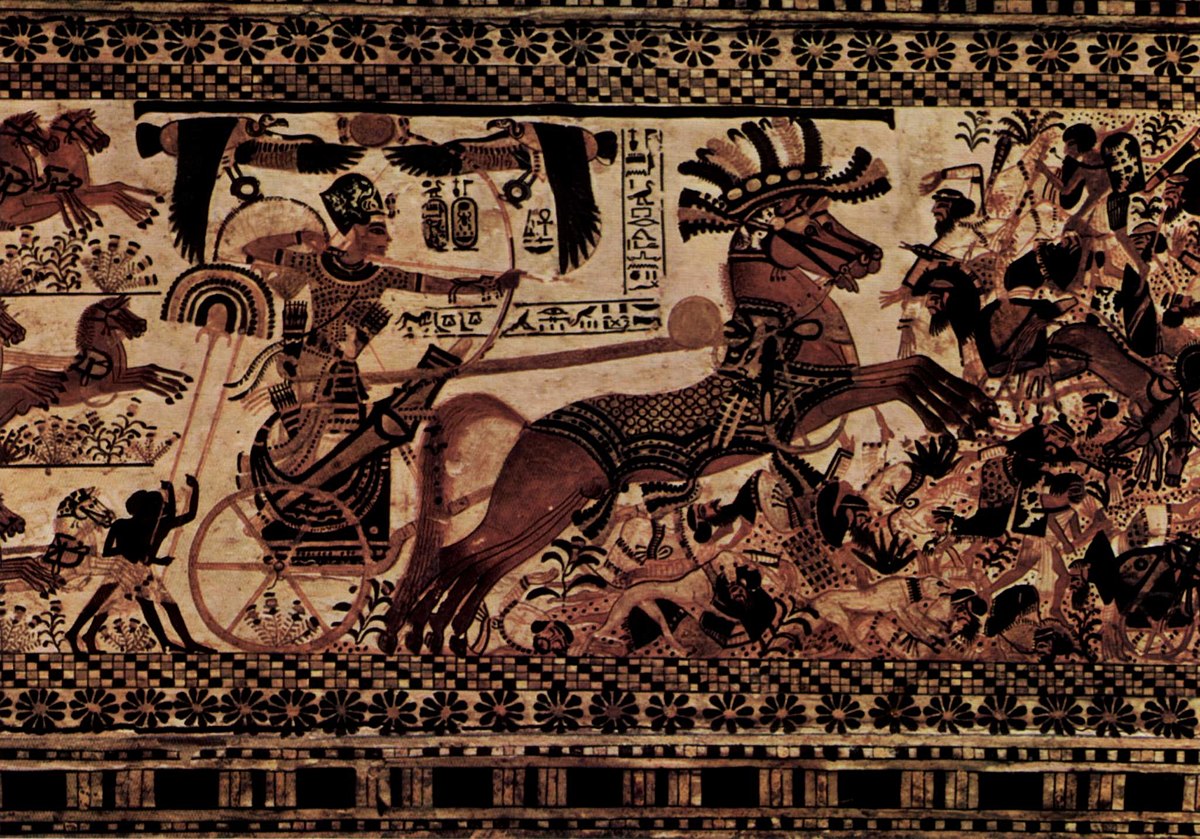 Agyptischer Maler um 1355
One day, Romelus overtook a major city known as Anoue and the temple within it. All the temple's inhabitants were killed except one: a high priest called Aubine Elie. Well known throughout the nation for his abilities in Lifeforce Healing, Aubine was instead taken captive. His lifeforce was to be used to preserve Romelus, should the need ever arise.   As Romelus and his army continued to pillage, parading Aubine in front of their captives, not only to break their spirits, but Aubine's as well. Still, Aubine refused to heal the warlord's battle wounds. Romelus, who was a surprisingly level-handed man, was convinced that breaking him would be as simple as the many warhorses he had broken over the years. Instead of demanding Aubine to relent immediately, he continued to worsen his treatment in steady increments in an attempt to wear down his resolve.   Aubine suffered dehydration, beatings, exposure, isolation, starvation, and still he did not relent. Neither did Romelus’ march on the countryside.   As Romelus lay siege to the city of Cineus, he was gravely injured in battle. He was taken back to his tent as the battle waged on, and Romelus’ son, who was a hot-headed boy, went to speak with Aubine. He said that if Aubine did not heal his father, he would have him killed in a horrible manner. When Aubine still refused to heal Romelus, the boy commanded that a rat be caught and brought to him.   A few moments later, the guards brought a rat they had found feasting on the bodies of the victims of war lying just outside the camp. Romelus’ son grabbed the rat and threw it to the ground, stepping on it and crushing it nearly to death. He said to Aubine, “Crushing you and your people will be just as easy as killing this rat.” And commanded Aubine be left with the shrieking animal for a quarter hour to make his decision.   When he opened the door to fetch the healer, a rat, still glowing from healing magic scurried out instead. Aubine’s lifeless body lay beside a small pool of rat’s blood. Romelus' son realized what had happened. Aubine had perished, having poured his entire Lifeforce out for the rat.

“I would rather pour out my life for a rat than for the sake of Kester Romelus.”
-Aubine Elie, Re-enactment

During this time, Romelus likewise had passed due to his wounds. Furious, Romelus’ son returned to the battlefields intent on enacting revenge on the city. He made the loss of Romelus widely known, and his men wanted to retreat to regroup. Still, he urged them on, and the city of Cineus finally defeated the armies that had plagued the nation for more than three decades after months of siege.

Not much is known about the life of Aubine Elie before his life at the temple. He was promoted to high priest in 3E 1302 and oversaw the temple's expansion. It is possible that he urged the temple to create more living quarters to bring as many people as possible into the fortified temple to protect them, however that is difficult to confirm. He was known as one of the most skilled users of Lifeforce Healing magic at the time, having healed many powerful patients including foreign and domestic kings, Acolytes, and other religious authorities.

The story resonated most with Treist nations, and now exists almost entirely outside where the story took place in nations such as Dereko and Aperan with solid following of Kaika.   There was a feast in Aubine’s honor in the area of the original setting until The Fidean Empire conquered the area. In certain communities that have had experiences or fear of similar conquest as Romelus’ armies, there may be a Feast of Aubine, celebrated in autumn. Usually a re-enactment of some sort is performed before the feast begins.

It is likely that Aubine did not forsee the consequences his decision had on the larger Treist community. Scholars believe he feared being killed in front of the soldiers fighting Romelus would weaken their resolve and cause them to surrender, and that he was not intending to set a precedence.   Even still, his decision resonated with Lifeforce Healers, as it is not an uncommon occurance for such mages to be captured and used against their people to aid their captors. Now it is commonly believed among Treists that taking one’s own life in lieu of being captured is honorable.   There have been several instances since the spread of this legend where Treist temples have seen mass suicides as attacking forces have set in. One notable example of this is the mass suicides at the Temple of Perrie in 4E 1642, during the time of Kaika's human manifestation, at the outset of Aurae of Kaika's role as Acolyte. 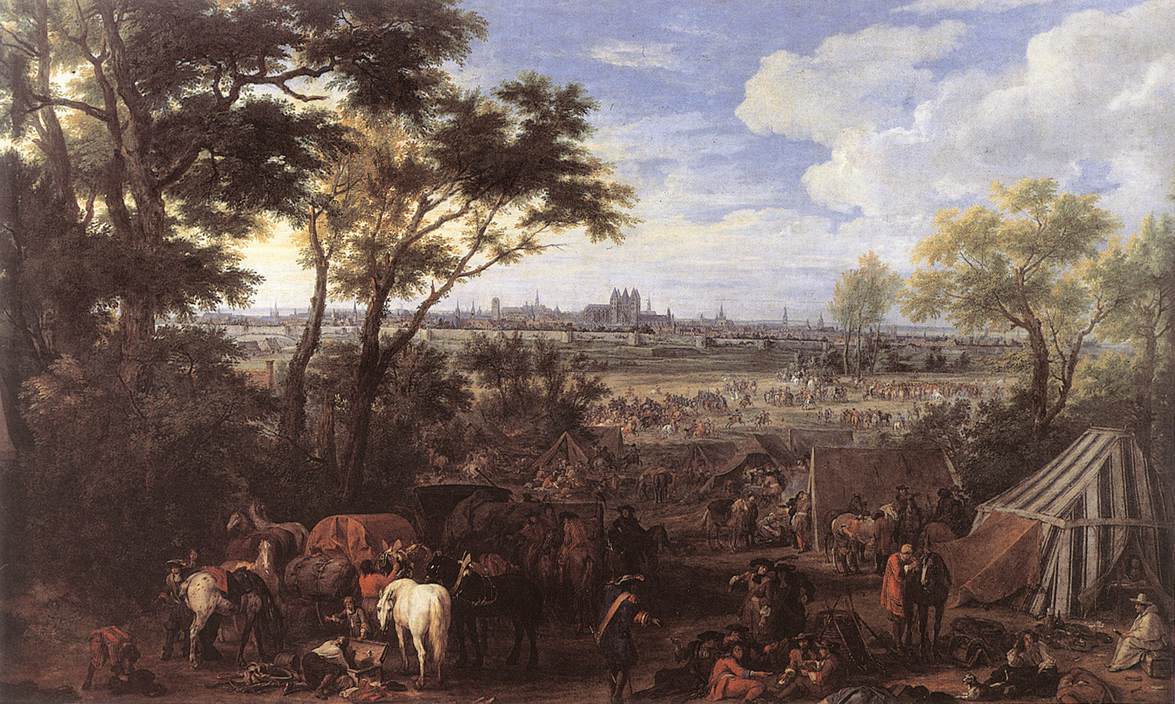 Siege tournai by Adam Frans van der Meulen
This perception places a heavy decision in the hands of healers all over Lathai: take their own life, or be responsible for the lives taken by their enemy?

Very good job with the article! The text flows well and is nicely separated. Is it preferred among the Lifeforce Healers to take their lives the way Aubine did, transferring all their lifeforce to someone, or the common way like using a knife or poison? By the way, it is a great idea of how healers who are often reluctant to take someone's lives can do it in an appropriate way!

Thank you very much! I’m glad you liked it! I suppose, yes, you could say it’s preferred as it sends a pretty clear message. However, it may not always be possible, in which case other methods would suffice. Thank you! That’s exactly what I was going for.

Great use of the layout ! This article is interesting to read, and generally quite pleasing to the eyes :)   I appreciated the moral ideologies that this story created among the mages.

Thank you very much! I'm glad you enjoyed it!

I really love how you've laid this out, told the story, and in general how real it feels. Very well done.

Thank you very much! I'm glad you enjoyed! I tried my best given the sensitive nature of the subject matter.

A fantastic entry into the competition! It almost reminds me of the Green Mile if you have ever watched that movie. A person with spectacular powers in a horrible situation who has a heart of gold.   You do great with this one!

Thank you very much, Barron! I’m glad you enjoyed it! I haven’t seen or read that one but from the summary i just read, it is very similar!