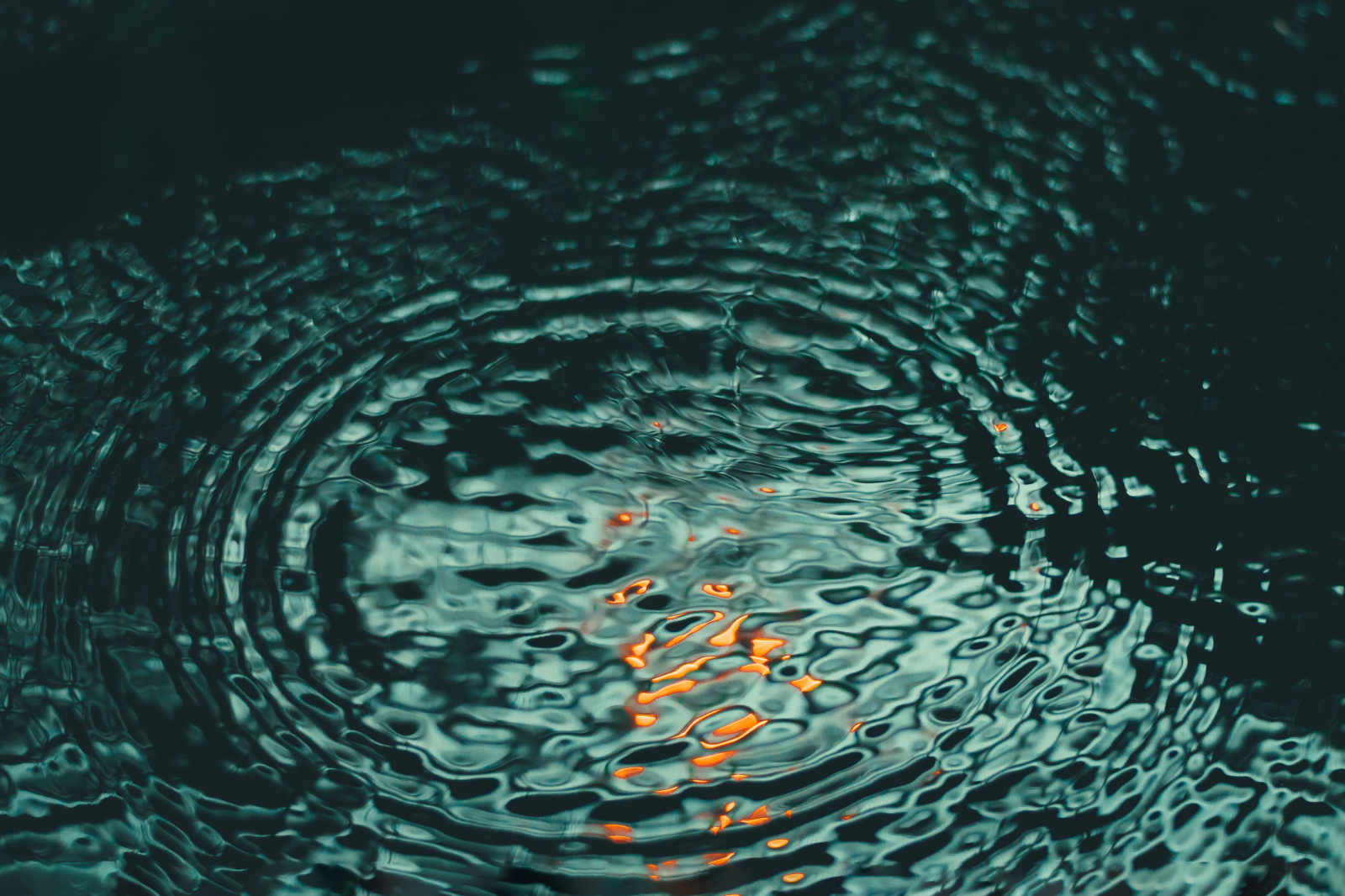 There are no records regarding where the Master uniform was found. The first and only mention in the old records that is still legible, mentions the artifacts were equipped by two bold members of the expanding Entrelai army. This was back when Greenleaf was a frontier settlement, aiding the country's expansion towards the west. Their names were not recorded.   There is also no information regarding how these two artefacts passed from them, to the Greenleaf guard. The most common version of the history says, they settled in the growing town after they retired, and became the first members of the guard, still fighting to keep their fellow citizens safe. But the absence of any records detailing the structure of the guard back then, make this impossible to confirm.
— Sargo Greentaro, Greenleaf scribe

On its inactive status, Greenleaf Master Armour resembles more a piece of ornate jewellery, than armour. Two aquamarine bracelets with a purple infinity symbol, in the front and back of them. Two silver spheres in each side of the circle complete the design in the front.
They are magnetically attached to each other. Only if the same person holds both bracelets, can they be separated easily. If more than one person holds them, they will revert to their attached position. To this date, nobody has been able to keep them separated for long in this state. 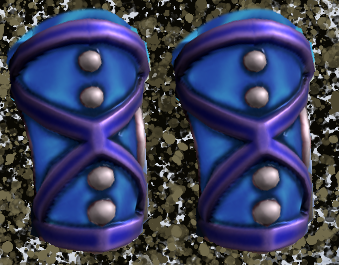 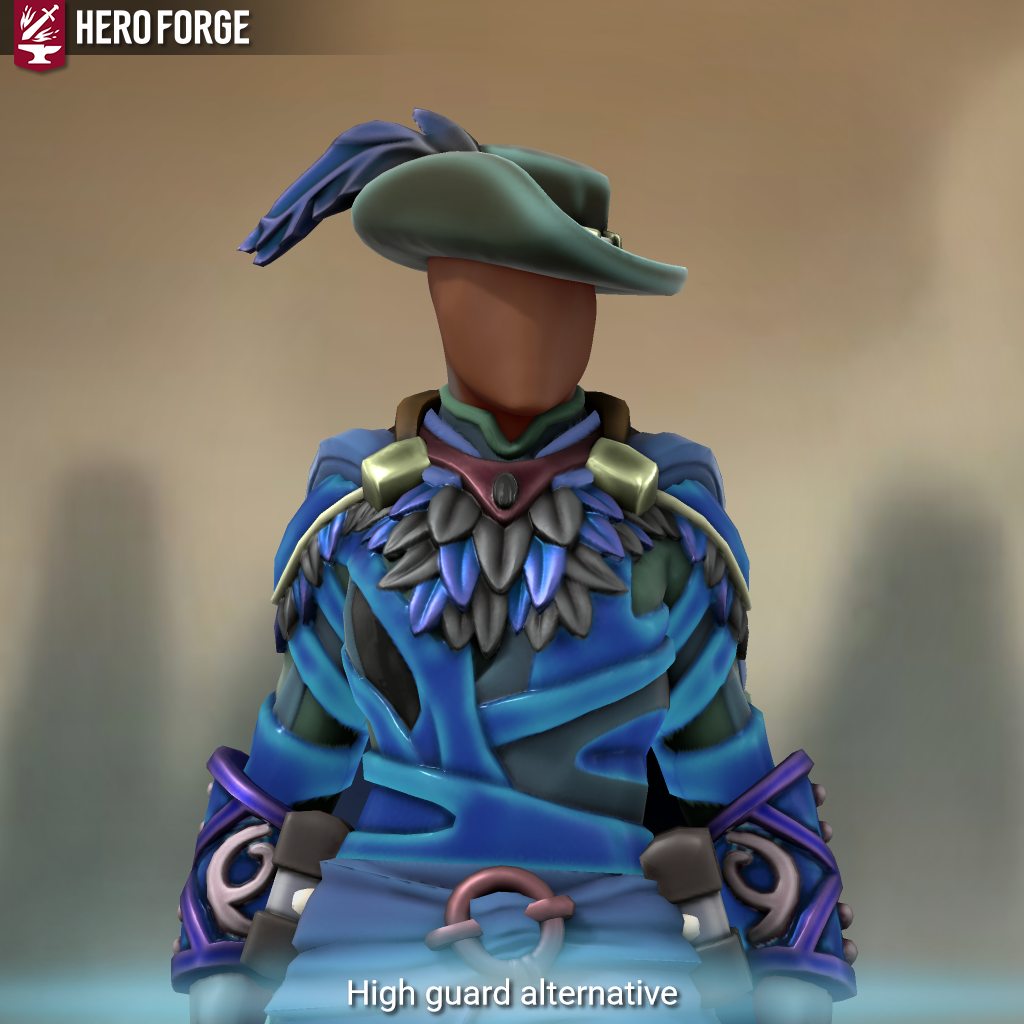 The armour activates when a single person puts on both bracelets.
At that point, the bracelets will adjust to the wearer's wrist, and threads of an aquamarine liquid, will emerge from both of the bracelets, covering any garment the wearer has on. The threads end in the second bracelet.
When activation is completed, 30s later, the armour looks like the wearer, has several miniature rivers running from each of the bracelets, over their arms, covering his torso and back. The rivers are constantly in motion, acting like a force field which cover the whole area. The wearer does not feel any extra weight, nor will he feel wet. Sometimes, specially when starting to wear it, he can feel a tickling sensation in the arms or torso.
People can interact with the "rivers" in the armour. They feel like a tingle of cool refreshing energy, a mix between a low electrostatic field and a river stream. No material residue remains when the interactions are finished.

The master armour is easy to deactivate. The wearer needs to push one of the silver buttons in the infinity symbol of the bracelet. At this point, the activation process reverts, and the river filaments retrace themselves back inside the bracelets. After the process is complete, the bracelets can be removed and stored safely.


As formidable as the Master armour is, it only covers the guards' torso. For the rest of the uniform we have to work with regular materials. The idea was to create it with matching designs and colours. This has proven to be more difficult than anticipated, so we have to simplify the final design. It will be green, to honour the settlement name, and blue, to match the good rivers our ancestors most definitely were inspired by, to make the original one.
— Old City records 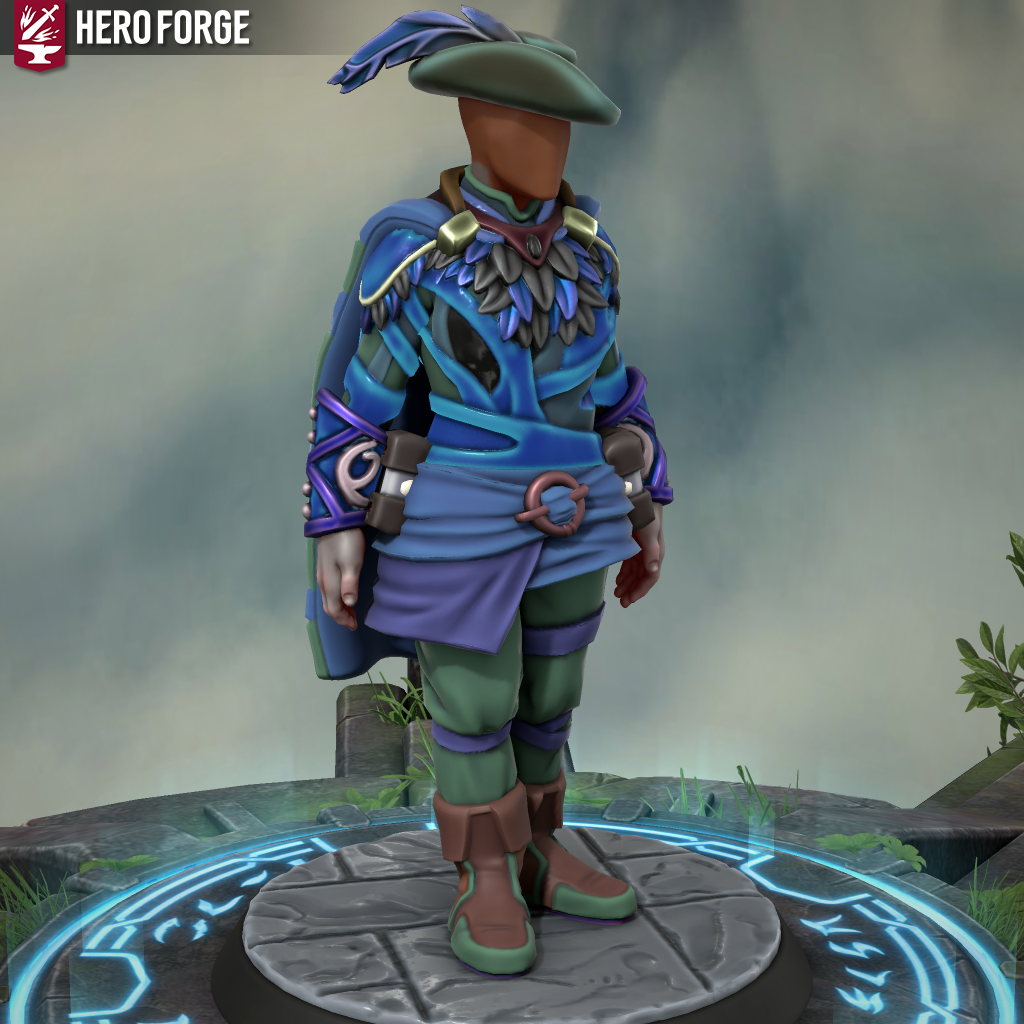 Why is it called The Master Armour?

Greenleaf grew quickly, and in a very short time, more than 2 city guards were needed. These caused a problem in dressing them, as no new armours were found in the meantime.
The solution for this problem was to create uniforms for the recently joined guards, inspired by the original Numenera armour, which earned it the Master descriptor.

The complementary pieces of armour are made to fit the current captains and are as follows: 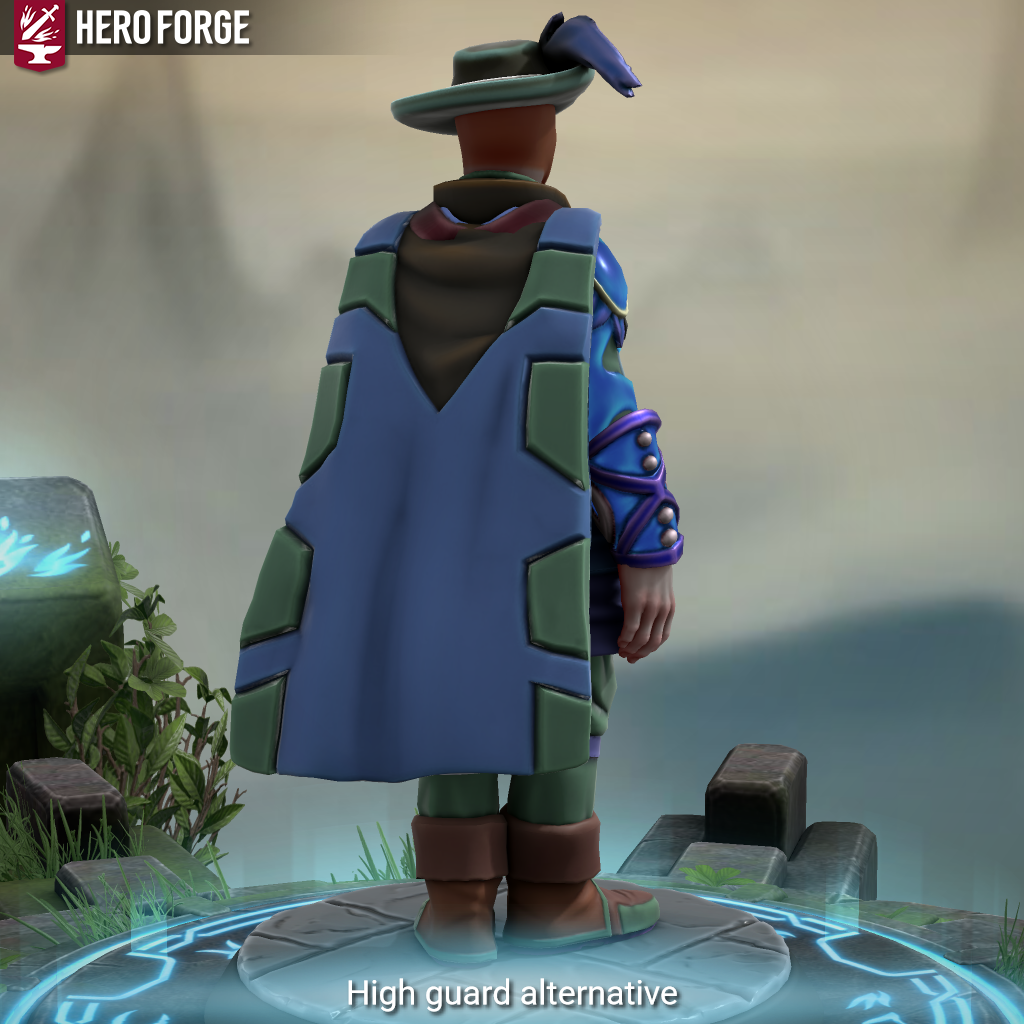 When the armour is not in use, it is kept in a rich dark wood box that has been meticulously crafted to create a fine texture. The bracelet symbol is carved on the top, while the Greenleaf emblem can be seen in the sides.

The Master Armour always deflects shots directed towards it, even at point-blank range. If solid, the shots will be seen being deflected towards the shoulders and away from the wearer. It's important to note, that the speed of the projector it only marginally reduced, so it can still impact people around the wearer. If the projectile is, instead, made of energy, a wave can be seen, spreading throughout the armour from the impact location.
It also conveys protection against the elements and any kind of corrosion.

Currently, these two artefacts are used to protect the two captains of the guard. They offer a higher amount of protection than any normal armour would provide and, due to its clear Numenera origin and associated history, are a symbol of status.

After a captain is retired and a successor is chosen to replace him, an armour transfer ceremony happens at noon, the day after the announcement, in the high market. This is a festive event, but as the location reveals, it's oriented towards the most wealthy citizens.
The event starts with a council member, chosen from The council of Greenleaf, giving a speech in the name of the whole council. After the speech is finished, the old captain ask to be relieved of his duty, in favour of his replacement, whom he presents to the council. The new captain confirms his vow to the city and the captaincy he is assuming, who then authorizes the old captain to be relieved of duty, and for him to pass on the armour to the new captain.
To this effect, the old captain deactivates the armour, places it on its storage box and pass it to the council. They, in return, thank the old captain for his services, and give him a final payout in exchange. The box is then handed over to the new captain, who proceeds to activate it on himself for the first time.
Artifact (EN)

I like the concept of your armour. Also good use of HeroForge.
I can't help but feel like the two parts you have here are part of a complete (yet undiscovered) set?
Also good that you thought about what happens when the attack bounces off the armour.

Thanks. I started with HeroForge to get some inspiration. Also, yes, this armour did have some complementary trousers and probably even a helmet. But, there are either lost to time or a different set of adventurers found those.

Very interesting idea for an armor. The rivers flowing from the bracelets must be quite special to watch and you translated it well in a heroforge mini! I always like some sciencefantasy artifacts with mysterious origins. I only now notice that you use the Ninth World as a start, very nice! ^^   I wonder how fast the activation is. Could it be activated suddenly when an attack occurs or does it go slowly? In all nice read!

Hello Kefkejaco o/ Yes, i'm a huge fan of Numenera. So all the stuff i write is for the Ninth World, focusing on Navarene at the moment, but i could be anywhere, they way i'm treating it. XDDD I'm glad you like the armour.

Yeah I like it too ^^ That is way I opted for a sort of science fantasy for my world as well with some ancient technology lying around :p

This is a really cool armor idea! I like that the armor can be activated and deactivated, kind of robotic in a sense. Great article!

Go go Power Ranger Guards! This sounds like a real nice way to have an easily-worn special armour!

Great article! I love the idea of the armour just appearing when the bracelet are activated, just flowing like a river. And the design being inspired by rivers is very interesting and give it a very unique look :D I also love the incorporation of your plant challenge article to provide some material :D   I was wondering about the river design possibly leaving some area unprotecting (the area between the "rivers"). Is it that there is some material below it that is a different colour but still of the same material and so part of the armour, or that there are really "holes" in the armour but that the magic still protects the wearer efficiently regardless? I like how you've explained what happened during an attack and it the armour reacts.

i'm glad you liked the armour. In the actual armour, there isn't any holes. The rivers are dynamic and constantly in motion, acting like a kind of force field, which cover the whole area. Heroforge is limited to represent this.

Oh this is an interesting feature! And it must look super impressive too to see it move like that :D

I adore this concept! Something about an armor made of magical rivers is just so *cool* - and I love how it's a magical breastplate, and the outfit is completed by non-magical items. Limiting the scope of the magical armor like that is a really cool choice. I see your world's based on the Ninth World - really does have that pieced-together, using-stuff-we-don't-fully-understand feel that I love about that world! Great stuff :D

I'm glad you liked. I try to keep add weird kick to most of my articles, to reflect the 9th world nature. But I also try to keep them grounded, as relatively mundane events, the people need to deal with regularily.

I love this article and had to re-read it just to enjoy it more. I like the fact that there is a ritual for passing the armour on to the next person.

Thanks. the ritual was important to me as it signal, this is an old artifact, that it being pass around since the creation of the city.

So, first off, I love the concept of the armor forming around you once the bracelets are on. What I wonder is if all the armor is the same OR does the armor change from person to person. Knowing me and my reading, I probably missed this, but still a fair question. I really love the whole idea of this armor and the detail you put into this, as well as the heroforge minis! All around, a fun article!

The actual armour is like a river, always flowing, so it never looks exactly the same. It covers whatever is underneath it, so it size changes from person to person. The bracelets also adapt to the wearer wrist, when they are put together.