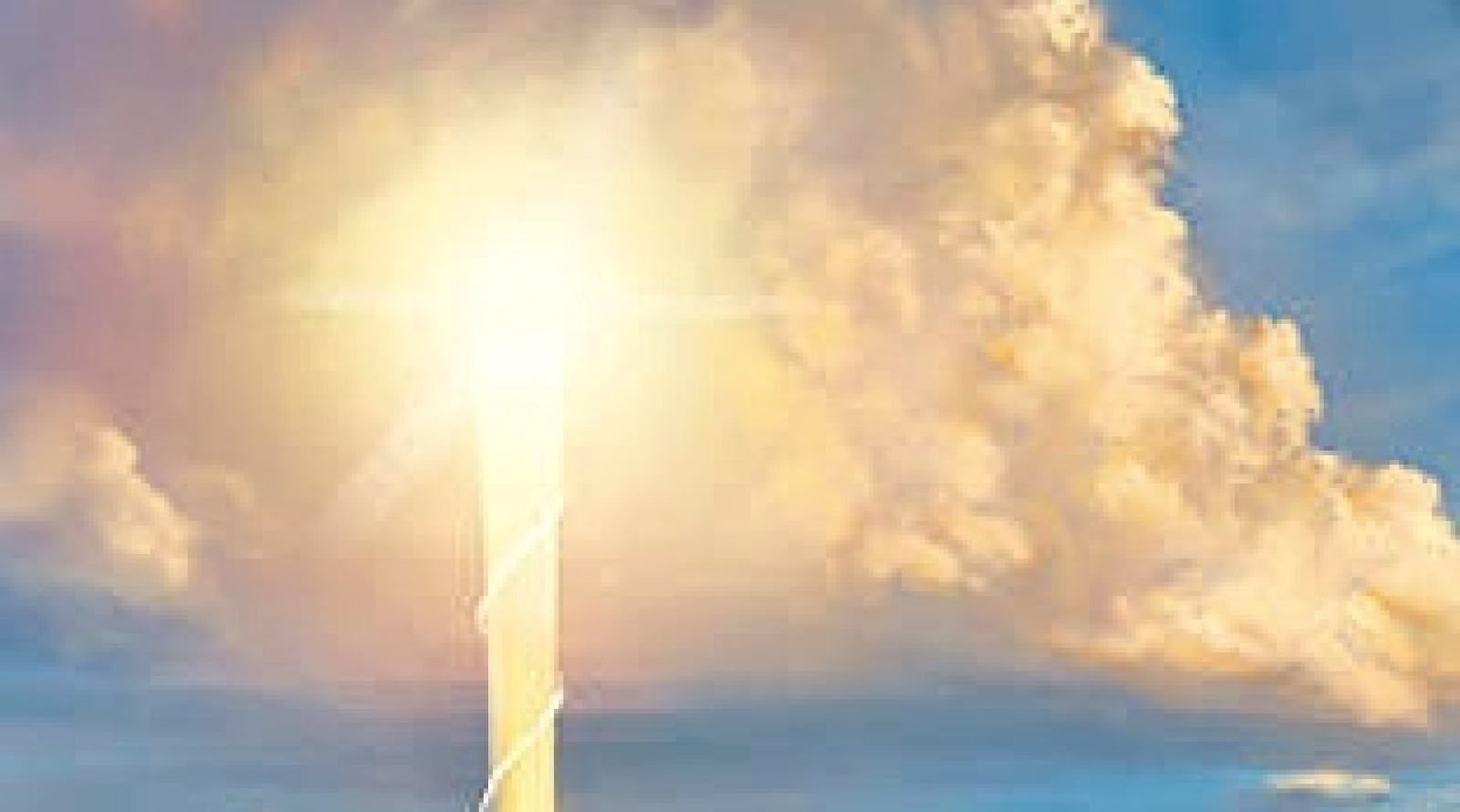 In a land of literal everdarkness...   ... somewhere in the wild wide endless plains between the intellectual and aristocratic Ostarda Collegiate, with their thanatolian undead dukes, and the vast and oppressing Nol Empire, run by the notoriously evil nolcar humans of burntlike pitch black palms, there is a majestic towering spire...   ... part temple, part fortress, the Night’s End Solarium, also known as Sun’s Cradle Obelisks, is a magnificent wonder that exists atop rumors of hope in a bleak land or menace for the undead and demonic powers of the continent. For such a frequently referenced building, its bright white marbled concrete halls sprawl in too many mysteries.   The only fact is that all bearers of the fragmented tales, heard in whispers in courts and taverns alike, attest that, there,the day is eternal and that near the top there’s an eye like the Sun itself. The rightly feared Glaring Eye, which you do not want looking at you.

Originally it was built, mostly by magic, as a typical mystical workshop tower for resting and magical experiments. But early on it also served as a small base of operations and control point of the evil activities of the old forgotten dungeon bellow.   Since then, the Spire always has had a kind of “tug of war” relationship with the dungeon and slowly dominated most of it. Which led to the Spire becoming more and more a fortress, both in purpose and functionality. Although most of the dungeon has been cleared and pacified, there’s still danger looming almost everywhere there. The spire is clearly not a typical fortress. It isn’t castle like. Doesn’t have outer walls and it holds no visible garrison or any army.   As the magic and overall power of the Thayr’ror grew other outer structures were added and, most importantly, its focus turned “internally” as most of the activities (and worries of the owner) ocurred within the rooms in the innermost parts of the tower. The scarce knowledge available seems to point out that the presence of the Night’s End tower is key in the cosmic balance between the forces of good and evil. And that the isolation, secrecy and quietude of the site is a shallow impression of those that are strictly bound to a material plane perspective of things. Those who are wise, experienced and/or powerful enough to know, understand why it deserves to be called House of Dawns. If they where accessible and talking, they’d probably attest to how dynamic, connected and active the Sun’s Cradle is and your opening young mind would gape in awe from how much it is a shining beacon far beyond its forever lit borders.

The oldest structure is the spire itself, if you don’t count the vile forgotten dungeon underneath it. The dungeon itself was redressed or expanded several times over the long time of existence of the Bright Spire, both by the Walking Sun Thayr’ror and the evil forces below, around the corners where Thayr’ror‘s light didn’t shine frequently.   The big smooth plaza floor on the ground level with wide steps filling the spaces between the mirror towerets was a much welcomed addition both aesthetically and for anyone trying to reach the ground entrance on foot, as it allowed walking towards it from any side and without hiking on trails or climbing the short elevation from where it spikes toward the heavens.   Then the six arching obelisks were erected, serving both magical and illuminating (with its inner mirrors) as well as other mundane purposes. Between each two of the obelisks, placed regularly, there are eight towerets with their huge concave mirrors on top and, at the same time, slightly leaning internally towards the mysterious solarium right under the top of the spire.

The lightly ornated marbled halls and the smooth ground level plaza, which leads to the ample staircases that descends the short hill whereupon it’s built on, resemble a classical architectural style. While its lean and very tall lightly arched consort obelisks and central cylindrical tower incorporate gothic elements. Circling the central spire, between the six obelisks, eight short and wide towers with impressive and huge curved mirrors on top of them, seem to stream light to the wallless galerie on the penultimate floor of the spire. There, in the center of the open hall, is a small sphere (2m/6’8” in diameter) of the brightest light imaginable. On the topmost floor there’s a two-pointed, carved, curved, grayish pinnacle sitting atop the rim of the floor. These points almost poke what appears to be an eclipsed sun, glowing with a dim light from the corola it sports. That’s the description of the dreaded Glaring Eye. As the pinnacle moves along the border, the Eye may open and a beam of spectral vibrant white light emerges from it. This light scorches it’s targets and never casts a shadow, ever. So the legendary tales go. Rumors tell that the light comes directly from focused energy of the little known positive energy plane and, aside from burning foes with its radiance, it allows the mysterious sun cleric to see the unseen, look inside the earth, remove banes and cleanse souls. Some say that this black sun is the reason for the surrounding area be as it is and that it’s powers grow every year. As a result, the eternally lit plains around the tower become larger as well, just a few feet, inside the unrelenting bleakness containing this small territory.   Thanks to the constant glares and beams of light streaming between the center and the 8 stocky towers around, as well as the strategically positioned mirrors on the inner sides of the obelisks and on the walls of the spire, the temple looks like a stone sun emerging from the ground.

The Spire was created to be the base of operations of its owner, the epic (to the point of seeming godlike) sun cleric Thayr’ror. It became a closely guarded secret and a special oasis of light and hope in the continent of Ygnandor, whose origin is in the Abyss itself. Most of the continent is covered in an eternal night, but Night’s End and its surroundings up to 15km (10 miles) are not only hallowed ground, but also subject to a unewielding continuous day. Healing and light magic always the maximum effect inside the above mentioned radius. About 100m (110yd) radius evil aligned outsiders and undead are hindered as they are automatically affected by a Protection from Evil and Good effect (as the spell).   Its grounds are the scourge of undead and the Glaring Eye near the top of the tower fulminates trespassers from afar.
Alternative Names
Sun’s Cradle Obelisks, Bright Spire, House of Dawn(s).
Type
World wonder
Parent Location
Ygnandor
Owner
Thayr’ror, the walking sun